Severe crushing injuries to the distal forearm are devastating and can preclude direct replantation for salvage of the hand. In such difficult situations, temporary ectopic implantation is a viable option under specific circumstances.[1] The amputated part, when transferred to a healthy recipient site, allows the patient to recover from critical combined injuries, radical debridement, and related soft tissue repairs.[2]

Previous temporary ectopic implantations have been reported in the literature. Wang et al.[3] reported two cases of temporary ectopic implantation of complex amputated forearms, followed by successful replantation to their anatomic positions in a second stage, the contralateral upper extremity was an acceptable recipient site for temporary ectopic implantation. For subsequent replantation, a cross-arm flap was designed to carry the vascular pedicle from the ectopic implantation recipient to improve blood supply to the replanted part upon replantation to the original site and with when the blood supply was re-established. Li et al.[4] temporarily implanted thumbs ectopically onto the forearm and foot in two cases, the thumbs survived after second-stage replantation and the patients regained function 4 months after surgery. Tomlinson et al.[5] implanted digits to the contralateral forearm, with subsequent reconstruction of the injured hand when combined with microvascular toe transfer. Their outcome was a functionally useful hand which could be incorporated into daily life and a cosmetic appearance preferable to that of amputation.

This report describes a case of temporary ectopic hand implantation. The left foot was used as the recipient site.

In May 14, 2010, a 35-year-old man sustained a machine injury to his left forearm [Figure 1]. The patient was consented for this technique. Physical examination revealed a severe crushing injury that extended from the wrist to the middle third of the forearm, with contamination and associated comminuted fractures. The remaining connecting tissues included the median and ulnar nerves, several flexor tendons, and a strip of skin with a severe contusion. 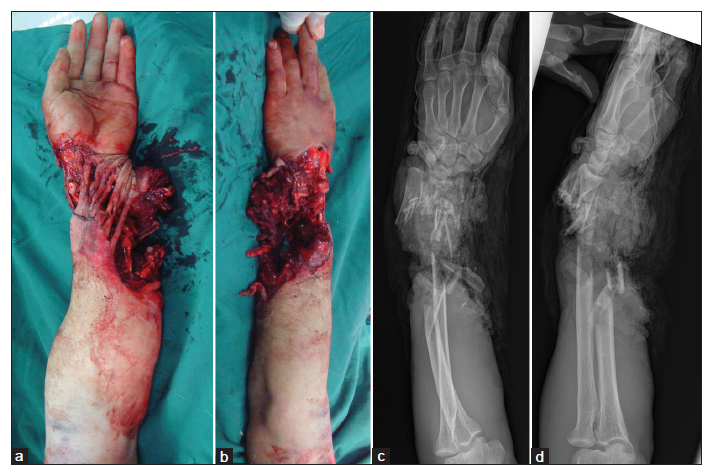 Surgery was performed under axillary block and epidural anesthesia with pneumatic tourniquet control. Two surgical teams worked simultaneously. The limb was transected at the level of the radiocarpal joint [Figure 2a and b]. The proximal end of the forearm was debrided thoroughly, but was preserved as long as possible. The median and ulnar nerves were transected at the distal-most level of the injury site and then turned proximally into the uninjured subcutaneous tissue. The severely crushed tendons were debrided. The proximal end of the forearm was sealed with vacuum drainage. 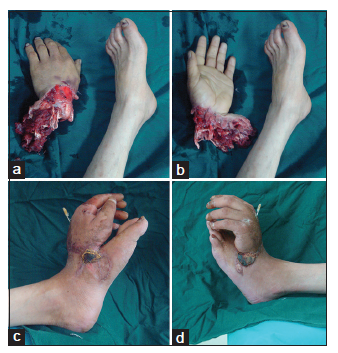 We selected the left foot as the ectopic recipient site because of vascular match. At the dorsum of the left foot, the dorsalis pedis artery was palpated and assessed using Doppler ultrasound. A dorsalis pedis fasciocutaneous flap, 7 cm × 8 cm in size, was raised on the dorsum of the foot as a base for the corresponding defect on the amputated part. The hand was stabilized to the tarsal bones with K-wires. Anastomoses were performed between the dorsalis pedis artery and the radial artery, between their venous counterparts, and between the greater saphenous vein and the cephalic vein. The skin defect was reconstructed with the dorsalis pedis fasciocutaneous flap and skin grafts [Figure 2c and d]. After surgery, the patient was placed in a warm room. The implanted hand together with the recipient foot was elevated above the heart level. The patient was given 10 mL/kg dextran 40 twice a day for 7 days. A nurse monitored the color and capillary filling of the hand and the flap every 2 h. Three weeks after surgery, the patient was allowed to walk with the bank foot in a specially designed shoe.

Three months after surgery, the ectopically implant hand was transferred back to the left forearm [Figure 3a]. The proximal end of the forearm was incised, and the end of the radius was debrided. The median and ulnar nerves were dissected, and the tendon ends were prepared. The hand together with the dorsalis pedis fasciocutaneous flap was incised as a single unit from the recipient foot [Figure 3b]. The dorsalis pedis artery, its accompanying veins and great saphenous vein were dissected proximally until suitable lengths were obtained. The hand was transferred to the left forearm [Figure 3c-e]. The radius and carpal bones were fused and stabilized with a plate and screw system. Anastomoses were performed between the dorsalis pedis artery and radial artery, between their accompanying veins, and between the greater saphenous vein and the cephalic vein. The median and ulnar nerves were repaired directly. We did not repair the radial nerve because there was a large nerve defect that precluded a direct repair. Moreover, the radial nerve is less important for hand function. We used the flexor digitorum superficialis tendons as grafts to repair the flexor digitorum profundus tendons, extensor and flexor pollicis longus, and extensor digitorum communis. The wound was then closed. The secondary defect on the left foot was resurfaced with skin grafts. Postoperative treatments were similar to the first operation. Four weeks after surgery, active range-of-motion exercises and physical therapy were started. 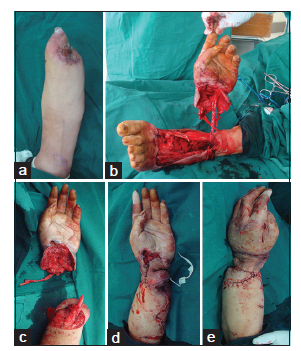 The hand survived with normal color and capillary refilling test, partial flap necrosis was noted, but healed with wound care. Bone healing was achieved 4 months after the second operation. Eighteen months after surgery [Figure 4], two-point discrimination on the pulps of the first through fifth digits was 4, 6, 7, 5, and 8 mm, respectively. Tenolysis was not performed because the patient refused. Tange of motion arcs for the first to fifth metacarpophalangeal joints were 5°, 10°, 4°, 0°, and 3°, respectively; for the proximal interphalangeal joints, 2°, 5°, 2°, 3°, and 0°, respectively; and for the distal interphalangeal joints, 0°, 0°, 2°, 0°, and 0°, respectively. The patient reported no pain for the hand or forearm. The disability score for the arm, shoulder, and hand[6] was 78. Based on a foot function assessment,[7] the patient reported no foot pain and had no difficulty when he stood on tiptoe or walked in the house. The patient had no difficulty when he walked outside for four blocks, climbed or descended stairs, got up from a chair, climbed curbs, ran, or walked quickly. 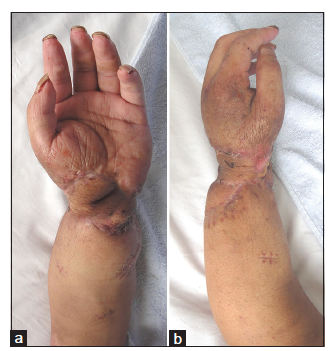 Figure 4. Appearance 18 months after surgery. (a) Extension; (b) flexion

Since the first replant almost 52-year-ago, thousands of severed hands have been reattached, preserving the quality of life for these patients through improved function and appearance that the void remaining after amputation cannot provide.[8] Revascularization procedures are often easier than replantation, but incomplete amputations with an extensive crush-avulsion injury may be more difficult because debridement of nonviable tissue and bone shortening cannot retain healthy structures. In such cases, the percentage of viability is lower. Temporary ectopic implantation offers an approach to detach the distal part safely from the injured site, which improves subsequent viability.[9]

Several recipient sites are available for temporary ectopic implantation, including the groin, lower leg, foot, and opposite arm and hand.[4-7] Selection is generally based on matching the vessels between the recipient site and the implanted part. In our case, a venous network on the dorsum of the foot was presented, which can be included in the dorsalis pedis fasciocutaneous flap. In the second-stage foot-to-forearm transfer, the flap can be transferred to the forearm along with the hand, without the need for additional vascular anastomosis. In our case, the flap provided sufficient room for the underlying tendons and nerves. We believe a groin flap or superficial inferior epigastric artery flap may be needed in other cases for which a larger space may be needed to facilitate easier tendon and nerve reconstructions. In addition, physical therapy of the amputated parts before reattached to prevent joint stiffness and tendon adhesions, the special needs at the secondary replantation, such as flaps for the coverage soft tissue defects at the recipient site and patient acceptance should also be considered.

Indications for temporary ectopic hand implantation are severe injuries on the proximal end of the limb where salvation of the hand in situ is difficult, and the distal part is mildly injured. Contraindication is severe injured in the distal part where revascularization is impossible.

Function of the reattached parts can vary widely. As these are severe and complex injuries, satisfactory results may not be attained in many patients. In such case, the inconvenience during the banking period and inappropriateness of shoe wearing, especially in a cold area, should be considered. In addition, the cost is generally higher than that of direct replantation or revascularization. Therefore, the benefits and risks should be discussed carefully before undertaking these surgical reconstructions. 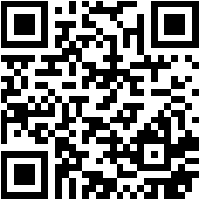