Due to the complex three-dimensional structure of the nose, the repair of the nasal defect requires reconstruction of three different layers: skin envelope, osteocartilaginous framework and nasal lining. Before nasal reconstruction can be accomplished, the nose must rest on a stable platform to avoid late nasal obstructions, and septal deviations resulting from scar contraction. We present three cases of nasal reconstruction using a forehead flap in which we performed a preliminary stage to increase reliability of outcomes.

Reconstruction of the nose is complex, due to its three dimensionality, and its prominence in the central facial region.[1,2] Full thickness nasal defects require repair of three different layers: skin envelope, osteocartilaginous framework and nasal lining. The latter one is considered the most challenging.[3,4]

Often, nasal defects extend into adjacent regions of the face such as the lips and cheeks, increasing the complexity of wound reconstruction. One can choose to simply “fill the hole”; however, when planning nasal reconstruction, the surgeon should be aware that the defect may not reflect the actual tissue loss. Swelling, infiltration of anesthesia, the action of gravity on tissues and scar retraction may alter the dimensions of the defect; and therefore, may not reflect the true defect at the time of presentation.[5]

The nose rests on a platform consisting of the premaxilla and the piriform aperture surrounded by the adjacent soft tissues (upper lip and cheek) with a well-defined angle and location. Improper positioning of nasal structures, even for a few millimeters can generate significant distortions. If such a platform is unstable, it can displace the reconstructed alar region inferiorly or laterally over time. Preliminary procedures, such as the repair of the lip and cheek defects using local flaps and skin grafts flap are usually necessary to prevent distortions and scar contracture of the adjacent nose before nasal reconstruction.[6,7]

Between May 2011 and May 2013, the department of Plastic Surgery, HUPES-UFBA, performed 12 nasal reconstruction surgeries that required paramedian forehead flaps. Of these, 3 patients required preliminary procedures to stabilize the nasal platform.

The selected cases were reported, highlighting the indication and the technique used in the reconstruction in the donor area of the flap as well as in the nasal and perinasal region. The patients involved in this article agreed to publish their facial pictures and signed the consent form.

A 29-year-old man presented with a nasal deformity caused by paracoccidioidomycosis, which affected the right ala leading to the nostril stenosis. In a preliminary stage, the right nostril was opened with a Z-plasty and skin grafting was performed [Figure 1]. After 4 months, he underwent resection of the scarred area to construct the original defect using a three stage paramedian folded forehead flaps to resurface the lining and nasal subunits [Figure 2]. The cartilaginous support was achieved by a conchal cartilage graft performed in the second stage. 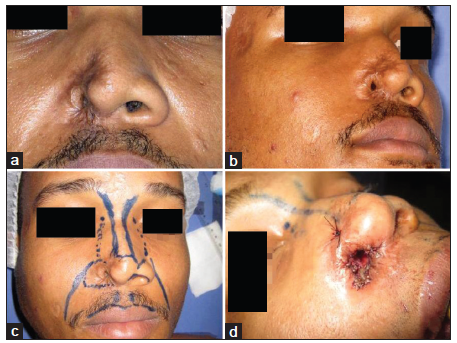 A 26-year-old female, presented with a total loss of the left ala and upper lip retraction after a motorcycle accident 4 years prior [Figure 3]. A preliminary stage was indicated, and a Z-plasty with a full thickness skin graft was performed in order to fill the resulting gap. Furthermore, a nostril enlargement was performed using local flaps, and a tissue expander was placed in the forehead [Figure 4]. After 3 months, the expander was removed, and a paramedian forehead flap was transferred in two stages [Figure 5]. In addition, part of the left nostril scar was used as a hinge-over flap to resurface the missing nasal lining. The cartilaginous framework was rebuilt using a conchal graft.

Figure 4. Case 2. Postoperative view after a preliminary stage including expansion of the forehead, correction of retraction of the upper lip and left nostril opening. (a) Frontal view, (b) lateral view, (c) oblique view, (d) frontal view with the landmarks 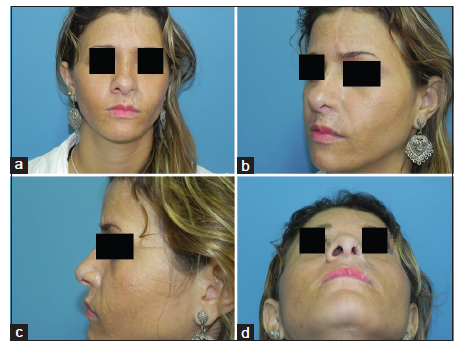 A 26-year-old man was referred to our department after an unsuccessful attempt at nasal reconstruction using a nasolabial flap. He sustained a gunshot trauma 8 years prior to presentation. In the preliminary stage, a costal cartilage graft was used for nasal dorsum augmentation. An advanced V-Y nasolabial flap was performed using the previous scar to fill the nasal base lining and a full thickness skin graft was placed to resurface nasal lining and unblock the left nostril. Three months later a three stage folded paramedian forehead flap was performed. In this case, a new forehead flap was required to allow better projection and support for the tip and resurfacing the columella [Figure 6]. 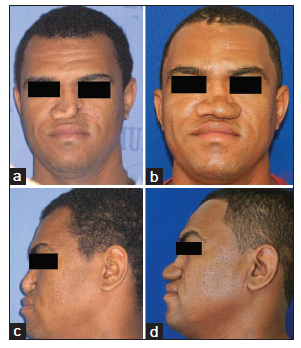 Scar contraction is a natural phenomenon in the healing process and is often not considered when planning surgical reconstruction. It is undesirable in nasal reconstruction, because minor flaws in preoperative plan can produce large distortions. The nose rests on a platform comprised of the premaxilla and the piriform aperture surrounded by the upper lip and cheek. This platform needs to be stable before planning a nasal reconstruction. In case 2, the lip position was corrected by releasing the retraction through a Z-plasty and skin grafting in the first stage. The forehead skin is the best donor site for nasal reconstruction because its color and texture are similar to the skin of the nose. It can be used for skin cover and lining repair.[8-11] The donor site is only partially closed after the flap transfer, and it is allowed to heal by secondary intention.

In addition, after preliminary reconstruction of affected areas, tissue expanders can be used in the donor site before nasal reconstruction using forehead flap. Some authors suggested the use of expanders in the forehead to improve scarring in the donor area and to provide large surface area to cover large defects.[9] In our department, scar improvement is not an indication for a saline expander. In patients with shortened vertical forehead height, the inclusion of scalp skin in the flap is not recommended due to the difference of texture and color of the nasal skin.[10] In such cases, we consider the use of expanders as a primary indication prior to forehead flap. The expanded flap has the advantage of decreased thickness that allows accurate reconstruction in two stages. Thus, the three stages reconstruction is restricted to more complex cases that require lining repair.

The airway patency is restored by excising the scar tissue and releasing retraction. Remaining excess tissue can be used as a flap to increase the nasal lining or to open the airway instead of being discarded. The nose should be rebuilt in a late stage following the principle of the subunits when the adjacent soft tissue structures are stable. In preliminary stages, scar tissue should be thoroughly evaluated in order to recreate the defect and be used as local flaps for lining repair (hinge-over flaps or V-Y flaps) or to widen the nostril (Z-plasty and skin grafts) as performed in cases 1 and 2.

Any procedure performed on the nose produces the fibrosis that makes any subsequent manipulation difficult. In our study, the nostril expansion was performed in a preliminary because after a two or three stage forehead flap, one will find more fibrosis (mainly after muscle excision) that would render the thinning the alar margins more difficult and may decrease reliability of the vascularization of the small local flaps. Menick[5] suggested using templates based on the contralateral normal ala. Thus, the adjacent nostril floor must be re-established and stabilized prior to nasal reconstruction.

In conclusion, correction of perinasal defects and the nostril stenosis should be performed as a preliminary stage to allow stabilization of the healing process. Any scar resection must be well-planned, since this tissue may be useful as hinge-over flaps for lining or as local flap for nasal stenosis correction. 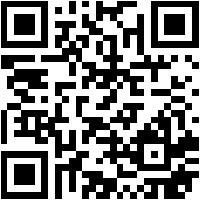