Methods: Inclusion criteria for this pilot study included patients of a single surgeon (LAC) who had previously received a constant dose of abobotulinumtoxin A over at least four consecutive treatment sessions for the previous 12 months to achieve an 85-90% elimination of dynamic glabellar frown lines. The primary outcome sought dose comparison between established maintenance abobotulinumtoxin A dosing and incobotulinumtoxin A first-time dosing. A 2:1 conversion (abobotulinumtoxin A: incobotulinumtoxin A) was chosen in most patients. Secondary outcomes were patient-reported onset of effect, physician-assessed effect at 10-12 weeks, pain associated with administration, and patient perceived need for re-treatment at 2 weeks.

Neurotoxin injection accounted for more than a third of all nonsurgical cosmetic procedures performed in the United States in 2012.[1] Abobotulinumtoxin A (aboBTX-A, dysport) and onabotulinumtoxin A (onaBTX-A, Botox) are currently the most commonly used preparations of Clostridium botulinum toxin in the treatment of glabellar frown lines. Composed of high-molecular weight protein complexes unique to the various formulations, each of these neuromodulators has a slightly different pharmacokinetic profile.[2] The protein complex is also thought to play a role in the immunogenicity of these therapeutic agents, influencing tolerance to drug effect and clinical response over time.[3]

Although a calculated unit conversion between alternative neurotoxin preparations cannot be directly derived due to differing manufacturing processes, the separate bacterial strains involved, and the variations in size of the associated complexing proteins,[2,6,7] a published clinical study as well as the senior author’s clinical experience has shown that a reliable conversion rate between aboBTX-A (dysport) and onaBTX-A (Botox) is 2.5:1.[8] In addition, several studies have concluded that a 1:1 equivalency exists between onaBTX-A (Botox) and incoBTX-A (xeomin).[9,10]

In our practice since 2010, the majority of patients treated with neuromodulators receive aboBTX-A. Given the potentially promising immunogenic profile of incoBTX-A,[11] we were interested in determining the correct dosage of this neuromodulator among our patient population. Due to the uncertainty regarding conjectural conversion between the three neurotoxin preparations, we sought to establish effectiveness and dosing equivalency of incoBTX-A versus aboBTX-A within a consecutive series of 32 patients previously treated with aboBTX-A for temporary reduction in glabellar dynamic wrinkles.

We conducted a prospective pilot study at a single surgeon center, with all injections performed by the senior author. The study included patients that had previously received at least four consecutive treatments of aboBTX-A at 4-month intervals at a stable dose, achieving 85-90% elimination of dynamic glabellar frown lines, and who had expressed satisfaction with at least four consecutive aboBTX-A treatments. Patient satisfaction with aboBTX-A treatment was defined by the patient’s decision not to return for re-treatments before the planned redosing interval of 4-month. The study was approved by the review board of University of Chicago Medical Center.

Primary outcomes of this pilot study were patient perceived clinical effectiveness at 2 weeks (defined as an 85-90% decrease in muscle activity) and percentage of muscle activity at 3 months per surgeon assessment. The planned conversion rate was 2:1 (aboBTX-A: incoBTX-A) using the established aboBTX-A dosage for each patient to determine an initial incoBTX-A dose. However, we permitted dose adjustment per the physician’s assessment at the time of incoBTX-A injection. The incoBTX-A dose was dispersed into the corrugator and procerus muscles for each patient; injection patterns were based on diagrams reviewed in the electronic medical record, documenting the injection points used during prioraboBTX-A treatments.

Secondary outcomes were examined via patient questionnaires that asked subjects to report on the onset of effect after incoBTX-A injection, the pain of injection versus their recollection of pain on aboBTX-A injections, the perceived duration of effect, and their overall satisfaction with the treatment session. Patients who were not satisfied with their initial treatment dosage were asked to return for re-treatment at 2 weeks. All patients were seen in follow-up at 10-12 weeks. At this time, glabellar and procerus activity were assessed by the treating surgeon, and the patient’s perception of the treatment was recorded.

Demographic and clinical characteristics were summarized using frequency counts and percentages for categorical variables and median and range for continuous variables. Residual muscle activity at 4-month following at least four abobotulinumtoxin A treatment sessions was compared to muscle activity with one incobotulinumtoxin A treatment session at 10-12 weeks using a paired t-test.

Twenty-nine out of 32 patients (91%) reported satisfactory treatment effect at 2 weeks, 3 patients (9%) requested re-treatment at 2 weeks with aboBTX-A due to perceived lack of effective treatment with incoBTX-A. During follow-up with the treating surgeon at 10-12 weeks, muscle paralysis was assessed to be 69.2% (± 27.3), vs. 90.3% (± 1.8) in an equivalent time period with aboBTX-A (P < 0.001) [Table 2]. With regard to perceived pain on injection, 62% of patients reported equivalent pain between the two treatments, 22% of patients reported more pain with the incoBTX-A injection, 9% had less pain with incoBTX-A, and 6% were unable to reliably recall. Overall satisfaction with incoBTX-A treatment was confirmed by 22 out of 32 patients among the study group (68%) at 2 weeks; this increased to 25/32 (78%) at 3 months. The most commonly cited reasons for dissatisfaction were related to the longevity and magnitude of incoBTX-A’s effect.

At 10-12 weeks following incoBTX-A treatment, the percentage of muscle activity was recorded by the senior surgeon in light of the dose ratio of aboBTX-A: incoBTX-A administered. Of the subjects that received an incoBTX-A dose at a ratio of 1.5-2.5:1, only 40% had a clinical result that was considered equivalent to the original four aboBTX-A treatment dose results. A total of 16% of patients had effects that were less than expected for the hypothesized ratio. Some patients (38%) received relatively more incoBTX-A (ratio of 0.5-1.5:1), due to clinical evaluation that the dose should be higher than 2:1 of the original aboBTX-A dose. Among this study group, 16% resulted in muscle attenuation that was greater than perceived with the aboBTX-A dose, whereas 22% had a less than expected response. Six percent of patients had a lesser response while receiving a relatively lower dose (ratio of 2.5-3:1) [Figure 1]. 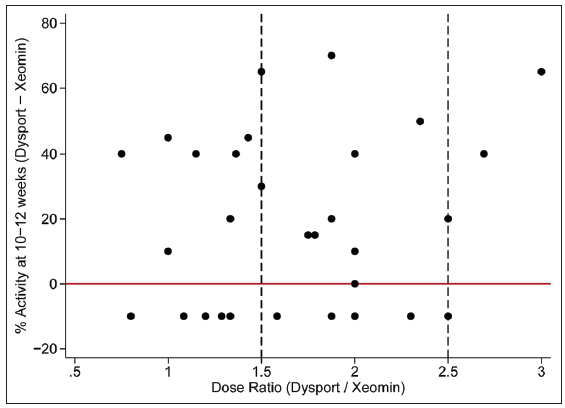 Reported overall patient satisfaction rates with botulinum toxin type A treatments are high[7,12] and are largely related to the onset, duration, and efficacy of treatment.[7] Given the tremendous impact of neuromodulator therapy and the importance of patient satisfaction as a key outcome, it is essential for practitioners to understand the optimal treatment dose, re-treatment interval, and expected outcomes associated with the various botulinum toxin A preparations available today.

Multiple clinical studies have demonstrated the safety, efficacy and tolerability of aboBTX-A since its Food and Drug Administration (FDA) approval in 2009 for the treatment of glabellar frown lines.[13-16] A prospective, randomized control split-face trial comparing aboBTX-A with onaBTX-A found no significant differences between treatment effects on muscle activity or wrinkle appearance, onset and duration of treatment effect, or diffusion characteristics of the two neurotoxins.[8] Although one clinical trial is comparing onaBTX-A with aboBTX-A indicated lower rates of patient satisfaction among patients treated with aboBTX-A,[17] satisfaction rates with aboBTX-A treatments were high among our patient population. All our patients had previously received at least four consecutive treatments of aboBTX-A at 4-month intervals at a stable dose and had continued to achieve 85-90% elimination of dynamic glabellar frown lines at this dose with a reported high patient satisfaction rate.

Free of complexing proteins, incoBTX-A is unique among the botulinum toxin preparations currently available. The subtraction of these inactive or denatured protein complexes theoretically results in a lower antigen load, decreasing the chance that the subject will develop neutralizing antibodies to treatment over time that could result in diminished clinical efficacy.[11,18] IncoBTX-A received FDA approval for the treatment of glabellar frown lines in 2011, and a phase III clinical trial conducted that same year confirmed its efficacy for this indication, in accordance with FDA-mandated scoring criteria.[19] One comparative trial of onaBTX-A and incoBTX-A reported overall high rates of patient satisfaction with both treatments and no statistically significant difference in satisfaction rates between the two neuromodulators.[20] A noninferiority trial comparing incoBTX-A with onaBTX-A found similar efficacy, safety, and patient satisfaction profiles between the two treatments at a 1:1 dosing ratio.[10] No head-to-head trials comparing incoBTX-A with aboBTX-A have been published to date.

As such, our pilot study aimed to determine a dosing equivalency of incoBTX-A vs. aboBTX-A that would result in similar clinical effectiveness and patient satisfaction among 32 patients previously treated with aboBTX-A for at least four treatments over 1 year. At ratios believed to anticipate equivalent results based on prior dose comparison studies,[8-10] we found that no precise ratio could be determined.

Limitations of our study include its small sample size, larger studies are warranted to better establish dose equivalency between aboBTX-A and incoBTX-A. IncoBTX-A injections were performed without cost to the patient, and this may have affected patient satisfaction rates. Secondary outcomes were determined through the use of a patient questionnaire. Recall bias may have affected our patients’ ability to compare the pain of incoBTX-A injection compared with aboBTX-A injection which had occurred several months prior, and patient-reported onset and duration of effect may not be the most accurate means available of recording these results. However, given the elective nature of treatment to improve patient cosmesis, we believe that the patient report, while inherently biased, is still an acceptable method of outcome assessment.

In conclusion, the pilot study did not establish a dose equivalency between incobotulinumtoxin A (xeomin) vs. abobotulinumtoxin A (dysport) in the treatment of dynamic glabellar frown lines in 32 consecutive patients who previously reported treatment success with abobotulinumtoxin A for at least 1 year at 4-month intervals. By combining the analysis of both the patient-reported results and the objective evaluation of dynamic glabellar muscle activity at 10-12 weeks following one treatment session with incoBTX-A, we found that using incoBTX-A at 17.1 (± 6.1) units was less predictable than using aboBTX-A at 27.6 (± 11.7) units. In comparison to aboBTX-A, the majority of our patients also reported lower satisfaction rates with incoBTX-A treatment; this difference was attributed to longer onset to treatment effect, increased pain on injection, and shortened duration of effect. Larger, prospective, randomized controlled studies are warranted to better establish dose equivalency between abobotulinumtoxin A and incobotulinumtoxin A. 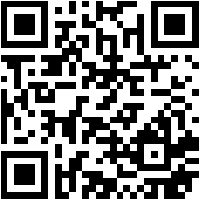