This article belongs to the Special Issue Management of Cleft Lip and Palate
Views:260 | Downloads:110 | Cited:

This case report aimed to present the course of surgically combined comprehensive orthodontic treatment of a male adult with cleft lip and palate, showing a left alveolar cleft, lateral deviation of the major segment of the maxilla, and palatal transposition of the lateral incisor. Preoperatively, the midline of the upper central incisors was shifted by 7.0 mm to the right, the right lateral incisor showed palatal transposition, and the residual alveolar cleft was 6.5 mm. Segmental Le Fort I osteotomy of the major segment, and simultaneous bone grafting into the extended alveolar bone and former cleft region were performed at 18 years and 4 months of age. Thus, midline correction, alignment of the right lateral incisor, and cleft closure were achieved; no further prosthetic treatment was required.

In patients with unilateral cleft lip and palate (UCLP), prosthetic reconstruction and orthodontic treatment are generally required to repair residual alveolar cleft, microdontia, and congenitally missing teeth. Mazaheri reported that prosthetic procedures, such as dentures, were required in 60% of patients with alveolar clefts[1]. However, in recent years, prosthetic procedures have often been avoided by performing surgical procedures. To achieve non-prosthetic reconstruction of the cleft, Stoelinga et al. proposed segmental Le Fort I osteotomy in cases where satisfactory results could not be achieved after orthodontic treatment and secondary bone grafting (SBG)[2]. In this report, we present the case of a male adult patient with UCLP with a wide remaining residual alveolar cleft, which was indicated for prosthetic treatment; however, this was avoided by applying a combination of segmental Le Fort I osteotomy and bone grafting.

The patient was born with left UCLP. Cleft lip repair was performed using the Tange method, modified Tennison-Randall method and Millard method at 5 months[3], and no gingivoperiosteoplasty or SBG was performed. Palatoplasty was performed using the push back method at 1 year and 6 months. From 9 years and 2 months, orthodontic treatment was performed using a quad-helix appliance and bite plate to expand the maxilla and correct anterior crossbite. At the age of 13 years and 11 months, a multibracket appliance was used for alignment of the maxillary teeth, and active orthodontic treatment was suspended at 15 years and 3 months for growth observation, during which time the patient used a Hawley retainer. Since there are no concerns over the oronasal fistula for the patient, the appliance was also used to cover the oronasal fistula instead of an obturator during growth observation. The patient and his family desired to postpone the SBG until adulthood.

At the age of 18 years and 3 months, the molar relationship was Angle class I, and the size of the residual alveolar cleft was 6.5 mm between the upper left lateral incisor and the canine [Figure 1A]. Thereafter, the midline of the upper central incisors deviated by 7.0 mm to the right, and the right lateral incisor showed a palatal transposition [Figure 1B].

Figure 1. Frontal (A) and upper (B) presurgical intraoral photographs. 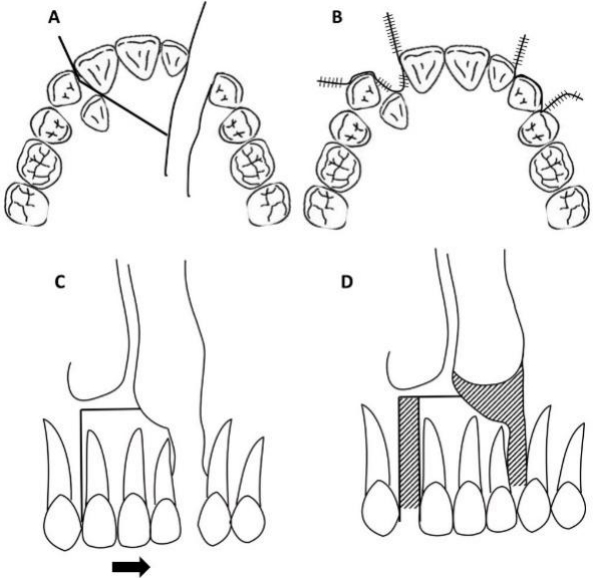 Figure 2. Diagram of this surgery: (A) Occlusal view showing the incision line; (B) Postsurgery, occlusal view; (C) Frontal view showing the osteotomy line. The segment was moved to the left (arrow). The horizontal osteotomy line was set 5 mm upward from the root apex of the central incisor. (D) Postsurgery, frontal view. Bone grafting was performed in the striped areas.

Because the patient had a good and stable occlusion in the molar region, 0.018-inch slot multibracket appliances were placed prior to surgery from the upper right canine to the left first molar, and 0.018 × 0.025 stainless steel wire was seated for the fixation of the segment during surgery. At the age of 18 years and 7 months, segmental Le Fort I osteotomy and simultaneous bone grafting were performed to correct the midline, obtain space for alignment of the right-lateral incisor into the dental arch, and close the residual cleft [Figure 2]. The dentoalveolar segment, including the upper right and left central incisors and the left lateral incisor [Figure 3A], was relocated to the left. Since a ready-made fixation plate could not be used because of the small size of the segment, the segment was fixed using orthodontic wire [Figure 3B] and an autogenous iliac bone graft was performed on both sides of the segment. Therefore, a midline correction and cleft closure were performed. The presurgical and 18-month postsurgical CT images showed successful bone grafting on both sides [Figure 4]. We waited two months for bone formation, and after confirming bone formation by x-ray, we began aligning the malpositioned right lateral incisor to the grafted bone region. Active orthodontic treatment was completed at 20 years and 8 months postoperatively. There was no relapse 2 years after surgery, and the patient had an acceptable occlusion [Figure 5]. In addition, a bone bridge was observed on both sides of the relocated segment, and no marked root resorption was observed 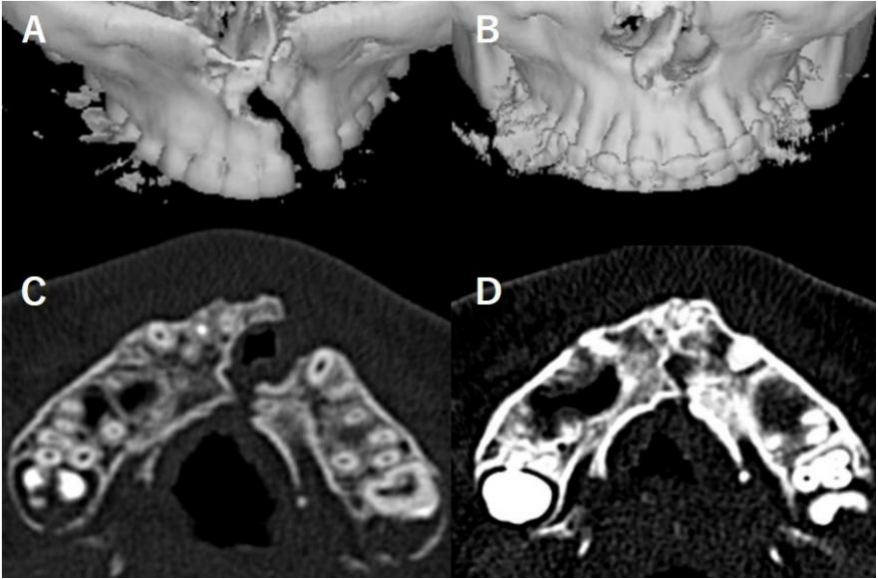 Figure 5. Frontal (A) and upper (B) postsurgical intraoral photographs.

To evaluate the combined surgical orthodontic treatment, a superimposition of the pretreatment and completion of active orthodontic treatment was performed [Figure 7]. The mandibular plane angle, positions of the upper and lower molars, and inclinations of the upper and lower incisors were maintained. A superimposition of the two dental models was performed to compare the changes in dental arch morphology before and after surgery [Figure 8]. The models showed that the anterior segment was relocated to the left, achieving correction of the midline and alignment of the malpositioned lateral incisor. 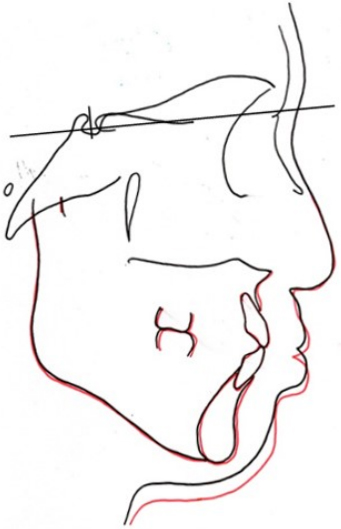 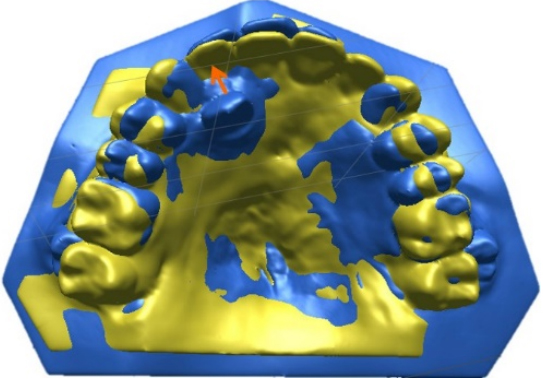 Generally, the applicable cleft width is 1-7 mm with permanent dentition. In contrast, the combined use of distraction osteogenesis in segmental osteotomy was reported by Liou in 2000, and the applicable cleft width was more than 6-8 mm after mixed dentition[6]. Therefore, whether segmental osteotomy should be combined with distraction osteogenesis depends on the width of the cleft and the timing of application.

Regarding the choice of surgical procedure, we opted for segmental Le Fort I osteotomy only because the patient had a good occlusion in the molar region. In addition, because the presurgical cleft width was relatively small (6.5 mm) and the patient had permanent dentition, we decided to perform segmental Le Fort I osteotomy without distraction osteogenesis. The advantages, in this case, include the ability to achieve midline correction and alignment of the right lateral incisor. Furthermore, because this was a segmental Le Fort I osteotomy of only the incisor region, the hospital stay was short. Despite the fact that fixation of the segment was performed using orthodontic wire due to difficulty in a ready-made fixation plate, the relocated segment was stable, and the bone bridge was fully formed on both sides. The risks of this small segmental osteotomy include uncertainty about the stability of the segment. In this case, in addition to wire fixation of the segment, bilateral bone grafting not only provided segmental stability but also enabled alignment of the lingual lateral incisor.

In the present case, midline correction, alignment of the malpositioned lateral incisor, and cleft closure were achieved, and no further prosthetic treatment was required. Segmental Le Fort I osteotomy combined with bone grafting is a comprehensive orthodontic treatment for adult patients with UCLP. Further studies are needed to ensure the best outcomes.

This work was supported by the JSPS KAKENHI (grant number JP19K10399) Grant-in-Aid for Scientific Research from the Ministry of Education, Culture, Sports, Science and Technology, Japan.

Ethics/Review board approval was applicable. The proper consent of the patient was taken for carrying out all the treatment and photographs. 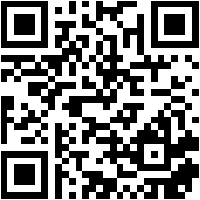