Aim: The bone particles harvested during osteotomy could be used as autogenous bone graft materials to correct a bony defect prior to implant placement.

Methods: A simple surgical procedure was described in which autogenous bone was harvested from the drills during the preparation of implant sites. Eleven samples were obtained from bone drilling during ﬁxture installation in 11 patients (5 men and 6 women) with an average age of 57 years. These samples were subjected to histological preparation, in order to evaluate for the presence of viable osteoblasts.

Results: Histological evaluation of the samples suggested that the viability of the bone tissue was maintained.

Conclusion: The results show that this method of harvesting autogenous bone may be useful in situations where small amounts of bone are required.

In our clinical practice, a bone graft is often necessary to correct a bony defect prior to implant placement. Autologous bone is considered to be the "gold standard" for bone grafting,[1-3] as it does not produce adverse reactions and has optimal biocompatible remodeling patterns and osteoinductive capabilities.[4-6] Grafting particulate bone is considered to be a better option than en bloc harvesting due to the former’s capacity to adapt to the site of engraftment; it enables a larger quantity of harvested material to be grafted, with advantages in terms of long-term cell survival, although the latter is influenced both by the harvesting technique and the dimensions of the particles.[7]

The aim of this study was to assess the presence of viable osteoblasts in bone tissue harvested with drills during implant site preparation.

A total of 11 patients (5 men and 6 women, aged between 35 and 75 years, with an average age of 57 years), in good general health condition, were included in this study. Patient selection criteria for this study were established so as to include patients with loss of one or more dental elements and with moderate alveolar atrophy diagnosed in preoperative X-ray examinations, including panoramic radiography. An Ethical Committee evaluated and accepted the guidelines of the study. All patients gave their informed consent to participate in the study.

All surgeries were performed under sterile conditions. Chlorhexidine 0.2% was used to rinse the oral cavity for 2 min prior to surgery. Local anesthesia consists of 1:200,000 mepivacaine-epinephrine was infiltrated into the mandibular/maxillary surgical site. An implant of adequate length was selected by radiographic examination, and a full thickness flap was designed. Implants were then placed following a modified drilling sequence to undersize the osteotomy and increase the insertion torque. The implant system’s drills were of kind implant fixture with parallel shape. Drills set a low speed were used in succession, harvesting autogenous bone from the drills for later bone defect grafting. A precision initial drill allowed accurate positioning of the osteotomy within the palatal alveolar wall. Once the direction of drilling was established, the site was enlarged with a 2 mm pilot drill. Subsequent twist drills were used to widen the osteotomy following the manufacturer’s instructions. The final drill however, was only utilized to a depth of approximately two-thirds of the implant length. 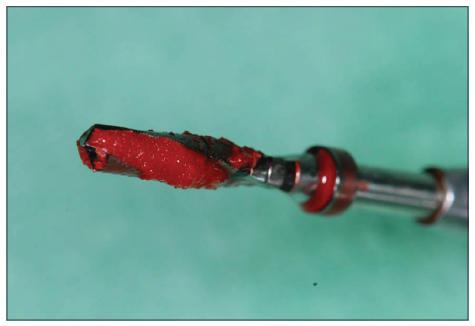 Figure 1. Particulate bone graft is harvested from the drill 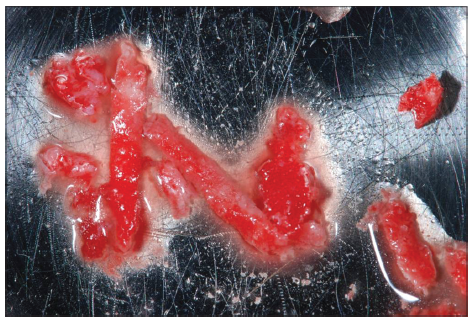 Finally, internal implants with a laser microgrooved coronal design (Biohorizons, Birmingham, Ala) were placed. Implant placement was performed using a surgical motor (Implantmed, W and H GmbH, Burmoos, Austria) at a speed of 15 rpm and a torque setting of 45 Ncm. In all cases, a ratchet wrench was used to fully seat the implants as the torque required exceeded the 45 Ncm set on the motor. The harvested material was used to fill the bony defects. At that time, a small sample of the harvested material was also sent for histological analysis.

Following surgery, patients were instructed not to brush or irritate the surgical sites for 10 days, to irrigate their mouth with chlorhexidine 0.2% 3 times a day for 1 week, and to maintain a soft diet for about 6 weeks. Analgesics (ibuprofen, 400 mg) and antibiotics (amoxicillin, 1,000 mg, 3 times daily) were prescribed to be taken for 1 week. Ten days after implant insertion, the sutures were removed.

The samples harvested for histology at the time of implant installation were fixed for 24 h in a neutral formaldehyde solution of 10% Leica ASP 300S® (Leica Biosystems Richmond, Inc. IL 60071) Tissue Processor. Subsequently, they were decalcified in a vial containing 10% ethylenediaminetetraacetic acid (EDTA) for 4 weeks. The EDTA solution was changed every week in order to remove the calcium from the bone fragments through chelation. After decalcification, the samples were embedded in paraffin, sliced with a microtome (Leica RM2125RT Microtome®, Leica) and stained with hematoxylin and eosin in Leica Autostainer ST5020® (Leica), after which they were ready for microscopic analysis.

Figure 3. Panoramic view. Histological appearance of the bone harvested from the drills (HE, ×10) 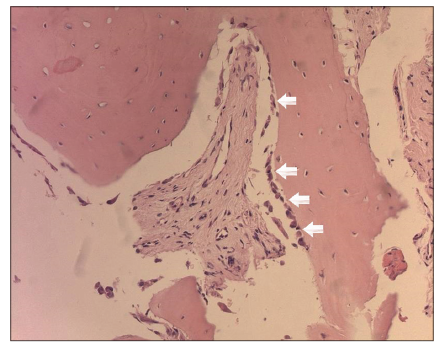 Bone particles harvested during implant site preparation consist of a mixture of cortical bone and cancellous bone, and have histologically well-preserved structures with a large number of osteocytes in a calcified matrix.[8] In an animal study, Coradazzi et al.[9] found that harvested bone resorbed more rapidly and showed higher osteoinductive potential than particulate bone in the early healing stages.

Particle size and available bone volume are important factors for graft material. In general, small particles are preferred secondary to more rapid resorption, greater surface area, and enhanced ostogenesis,[10-12] but particles that are too small lack the space for the migration and proliferation of cells, vessels, and bone. A pore size of at least 100 μ is necessary. Zaner and Yukna[12] recommended that an appropriate particle size would be 300-500 μ.

Grafting particulate bone is considered a better option than en bloc harvesting because of the former’s capacity to adapt to the site of engraftment; it enables a larger quantity of harvested material to be grafted, with advantages in terms of long-term cell survival, although the latter aspect is influenced both by the harvesting technique and the dimensions of the particles.[7]

The drill was set at low speed as this has been shown to preserve viable osteocytes.[13,14] For these reasons, an investigation was made on the methods of obtaining autogenous bone tissue by means of drills, and the possibility for preservation of cells with bone induction capacity was evaluated.

The use of bone harvested should be considered to be an extremely conservative technique, since it eliminates the need to obtain autogenous bone material from a second surgical site, which can be complex.[15]

There are no studies to date which have histologically evaluated the bone harvested during implant site preparation. From the results obtained it is concluded that the harvesting method described is capable of preserving cells with bone induction capacity, secondary to a large number of osteoblasts and the expression of viable cells. This suggests that the viability of the bone tissue is maintained and can begin osteogenesis. Another positive factor is the utilization of autogenous bone tissue of membranous and not of endocondral origin, a material known to be more efficient because it has lower reabsorption levels.[16]

The surgical technique described for the procurement of particulate intraoral autogenous bone material is simple, efficient and safe. The possibility of harvesting bone graft while the implant site is being prepared allows the procurement of the particulate bone without the disadvantages of donor site morbidity.

The authors wish to thank Dr. Adolfo Apicella of the Anatomy and Histopathology Department "Luciano Armanni," Second University of Naples, Naples, Italy, for his valuable contribution to the present study.