Anatomic variability of the vascularized composite osteomyocutaneous ﬂap from the medial femoral condyle: an anatomical study

Methods: This anatomical study described the variability of the arteries from the medial femoral condyle in 40 cadaveric specimens.

Conclusion: The current study demonstrates that the size and length of the vessels to the medial femoral condyle are sufﬁ cient for a vascularized bone ﬂap. A careful preoperative vascular assessment is essential prior to use of the vascularized composite osteomyocutaneous flap from the medial femoral condyle, because of the considerable anatomical variations in different branches of the DGA.

The vascularized bone graft is the gold standard for reconstruction of bony defects, especially in case of chronic nonunion.[1] An anatomical studies and clinical applications for the use of a vascularized corticoperiosteal flap from the medial femoral condyle have been performed and described previously.[2,3] In 1991, Sakai and Doi and Sakai[4,5] initially reported the use of a thin, free vascularized corticoperiosteal graft for the treatment of persistent nonunion without significant bony defects in the upper limb. It has been demonstrated that the articular branch of the descending genicular artery (DGA) or the superomedial genicular artery (SGA) perfuses the medial femoral condyle. There are also two branches from the DGA which supply the muscle and skin at the level of the medial femoral condyle; the saphenous branch (SB) supplies the skin at the medial knee and proximal third of the leg, and the muscular branch (MB) normally runs into the vastusmedialis muscle.[4-7] This may allow the use of the DGA and its branches to form a composite osteomyocutaneous flap from the medial femoral condyle in the reconstruction of bony defects associated with avascular contracture of the soft tissue.

Although prior studies have described the composite osteomyocutaneous flap, the detail blood vessels in this region have not yet been fully elucidated. The aim of this study was to evaluate the anatomical variability of the vessels and their branches in the medial femoral condyle. Board of Hue Central Hospital approved the study.

Ten fresh and 10 formalin preserved adult cadavers were dissected in our study, consisting of 11 males and 9 females. Forty cadaveric specimens were harvested from both thighs. The osteomyocutaneous medial femoral condylar flap was elevated using the medial approach initially described by Sakai and Doi.[4,5,8] Cadavers were placed into the supine position and a 15-cm longitudinal incision was made medially along the posterior border of the vastusmedialis at the level of the distal femur, extending from the adductor hiatus proximally to the medial collateral ligament distally.[9-12] The fascia of the vastusmedialis was then incised, and the muscle was retracted superiorly while the adductor magnustendon was retracted inferiorly. The DGA was exposed on the floor of the muscle compartment proximally and on the surface of the medial femoral condyle distally. The SGA, a medial branch of the popliteal artery, was also studied. The anatomy of the DGA and SGA with their branches and their areas of distribution were dissected, measured, anddocumented. For the DGA, the length, location of origin, diameter, branches and terminations in the skin as well as in the periosteum overlying the medial femoral condylar region were determined. A dominant artery between the DGA and SGA was defined as a main artery supply to the medial femoral condyle.[7,13] The position of the artery was measured as the distance from the origin to the knee joint. The length of the artery was defined as the distance from its origin to the area of termination. The outer diameter (d) of the artery was calculated through the perimeter (P) of the peripheral arteries by the following formula: d = P/3.14.

The perimeter was calculated by flattening the artery at its origin and using a digital caliper (Anyi Instrument Co. Ltd, China) to measure its flat section, and then doubled. In the fresh cadavers, we also performed a dye injection at the origin of the articular and SBs of the DGA. This allowed visualization of the areas of the corticocancellous medial femoral condylar segment and skin paddle.[14,15] All measurements were recorded in millimeters, with an accuracy of 0.02 mm.

The anatomical structures differed on the two sides of the thigh in the cadavers. The DGA origin from the superficial femoral artery (SFA) was found in 33 of 40 cases (82.5%). The DGA was absent in 7 cases. In 3 other cases, the DGA appeared together with the SGA. The SGA was present in 10 cases (25%). The DGA was dominant over the SGA in 33 of 40 cases (82.5%). In the remaining 7 cases (17.5%), the SGA was the major blood supply to the medial femoral condyle. 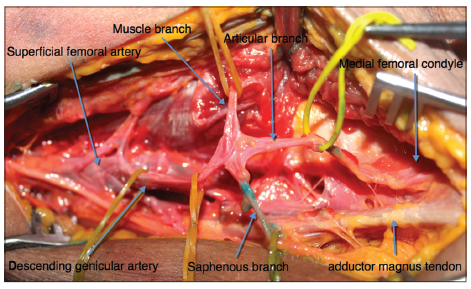 Figure 1. The vascular distribution of the descending genicular artery and its branches at the left femur in the fresh cadaver 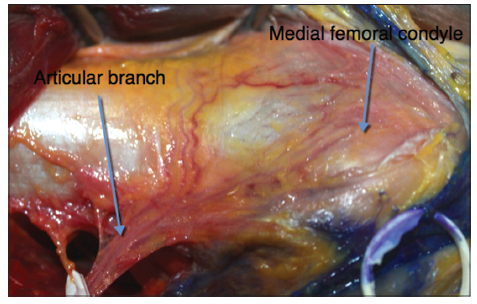 Figure 2. Anatomy of the articular branch from the descending genicular artery for blood supply to the medial femoral condyle 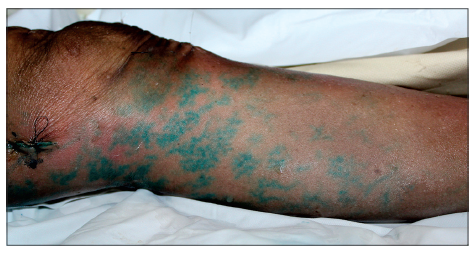 Figure 3. Cutaneous angiosome distribution of the saphenous branch at the medial side of the knee and proximal leg after injected methylene blue in fresh cadavers

Either the DGA or SGA perfuse the medial femoral condyle. The current study evaluated the anatomical structures and variations of the DGA and SGA as well as their branches in adult cadavers. One half of cadavers were studied in fresh condition to facilitate the evaluation of the perfusion area of skin and bone.

Similar to previous studies, the current study demonstrated that the DGA generally divides into 3 branches (63.7% of cases) or 2 branches (33.3% of cases). In addition, the AB of the DGA or the SGA always nourishes the periosteum of the medial femoral condyle. These arteries have adequate diameter and length to supply the medial femoral condylar flap. In the absence of the DGA, the SGA has sufficient size, but the vascular pedicle is shorter, and SGA is used only for a pure bone flap.[8] The results of previous studies of Jones et al.[10] Yamamoto et al.[7], Van Dijck et al.[6] and De Smet[13] also made similar conclusions about the viability of this bone flap using the DGA or the SGA for treatment of small bony defects, especially in the treatment of nonunion fractures that require a good blood supply for bone grafting. In the specific study of Jones et al.[11], vascular pedicles of the vascularized medial femoral condylar flap for the treatment of scaphoid nonunion were the DGA in 10 cases and the SGA in 2 cases.[11]

In many cases of chronic nonunion, the soft tissue usually has a fibrous scar, infectious environment and avascular contracture. Extensive debridement of infected and devitalized tissue and bone back to bleeding tissue is required. Vascularized bone graft associated with a well-vascularized muscle or skin paddle is necessary in these cases. In the case of small bony defects (< 6 cm), the vascularized composite osteomyocutaneous flap from medial femoral condyle can fill the dead space of bone and soft tissue. It also minimizes the risk of deep tissue infection. By increasing the vascularity and the blood supply of the composite flap, limb salvage can be obtained with a single surgical procedure. Vascularized bone grafting can be combined with muscle tissue and a skin island, and thus can be used to solve complex problems in cases with bone and soft tissue defects.

The current study showed 100% of AB, 62.5% of MB, and 70.3% of SB branches come from the DGA. It allows the use of the medial femoral condylar bone flap, and this can be combined with muscle or skin in some cases. However, preoperative vascular assessment of this flap with an angiogram is very important due to the anatomical variation of the DGA as well as its muscular and SBs. This result differs from previous reports which studied fewer specimens; Iorio et al.[16] identified the SB in 11 of 12 specimens (92%). Rahmanian-Schwarz et al.[1] studied 21 specimens, and in 91.5%, the DGA split into three branches: AB, MB, and SB. Yamamoto et al.[7] showed that the SB was detected in 79% of their 19 specimens, branching off a common trunk with AB. Van Dijck et al.[6] found that the SB was present in 14 (41%) of the 27 cases.

The current study demonstrates that the size and length of the vessels supplying the medial femoral condyle are sufficient for a vascularized bone flap. This graft is very helpful in the treatment of chronic nonunion and small bone gap reconstruction. Although many studies have reported the viability of the vascularized composite osteomyocutaneous flap from the medial femoral condyle, a careful preoperative vascular assessment is essential secondary to the considerable anatomical variations in the different branches of the DGA. Further clinical studies will be required to clearly define the success of this composite osteomyocutaneous flap.

The authors would like to thank the Department of Anatomy, Ho Chi Minh University of Medicine and Pharmacy, Vietnam. We are grateful to Doctors LÊ Nghi Thanh Nhan, Paul Luu, Nguyen Van Phung, Tran Thiet Son and Peter Scougall for their excellent help and support.