Soft tissue defect of the knee remains challenging and problematic to reconstructive surgeons. Prerequisite for the reconstruction of this region include the flexibility, durability and thickness of the skin paddle to sustain the motion of the knee joint. Numerous surgical trials have been performed using musculocutaneous flaps, fasciocutaneous flaps, perforator flaps, and free flaps to repair these defects with varying degrees of success.[1-3]

Local flaps created from the calf muscle are preferred primary surgical option. However, local flap may not be an option when there is injury to the donor site endangering the vascularity. Although the free flaps are less affected in terms of the donor site selection, selection of the recipient vessel in the vicinity of knee defect remains problematic.

A 24-year-old male was injured in a motorcycle accident. Patient had a knee injury with soft tissue defect measuring 12 cm × 7 cm and exposure of the patella was noted [Figure 1]. Physical examination revealed severe contusion of the posterior calf. Because of these findings, repair using local gastrocnemius musculocutaneous flap was excluded to avoid unreliable vascularity of the donor site. Instead, a free flap reconstruction using a vessel in the vicinity of the knee as the recipient was planned. 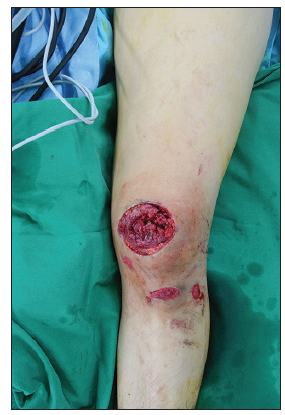 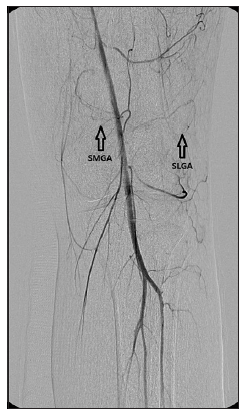 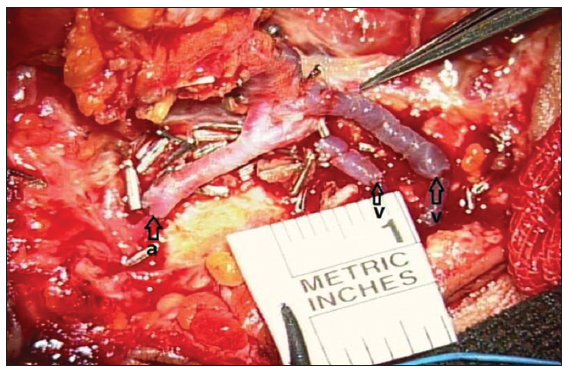 The flap survived successfully, and the patient had functional ambulation within 15 days after surgery without any complications. Full flexion of the knee joint was achieved by postoperative week 4. Patient was also able to squat without any discomfort. The patient was satisfied with the contour of the flap at postoperative month 11 [Figure 4]. 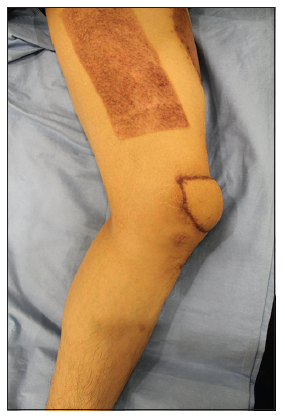 Reconstruction of soft tissue defects surrounding the knee has been well-known for its difficulty and strenuous nature of the process. Damage to the soft tissue around the knee can be caused by trauma, cancer resection, and the exposure of prosthesis.

Several musculocutaneous flaps including gastrocnemius, sartorius, vastus medialis, and vastus lateralis flaps have been applied successfully to cover the soft tissue defect of the knee. Other fasciocutaneous flaps, island flaps and perforator flaps based on the sural artery, superior lateral genicular artery, and the reverse flow of descending branch of lateral femoral circumflex artery have also been used.[4-6] However, bulky contour of the flap, functional impairment of the donor site, and discomfort on ambulation due to the scar extended from the donor site to the knee may be encountered with these flaps.

To avoid these drawbacks, several free flaps have been introduced.[7-9] However, free flaps using the source vessels may threaten the vascularity around the traumatized knee joint. The evolution of microsurgical techniques has allowed surgeons to anastomose vessels between perforators that are smaller than 0.8 mm in caliber. These techniques are termed as supermicrosurgery. Hong and Koshima used this refined technique on 25 soft tissue defects over knee joint and minimized donor site morbidity.[9] However, their promising results are extremely dependent on the expertise of the surgeon. They preferred free style reconstruction without identifying the recipient vessels, while they could easily find the recipient vessels in the plane between the fascia and muscle.

In this report, we demonstrate the use of conventional angiography to identify superior medial genicular perforator vessel as the recipient in this patient. To the best of our knowledge, this is the first case of supermicrosurgical reconstruction using superior medial genicular perforator as a recipient vessel. Although this procedure is technically demanding, the use of conventional angiography to identify the recipient vessels made it less tasking. Compared to conventional local flap modalities, this technique creates less scarring, providing better contour of the knee and decreased discomfort on ambulation. The patient could flex the knee joint fully and perform exercises such as squats without any discomfort in four weeks.

Further investigation with larger cases should be performed for validation. Nevertheless, this case implies the use of supermicrosurgical techniques and superior medial genicular perforator as an alternative to repair soft tissue defect surrounding the knee when the conservative local flap technique may not be reliable. 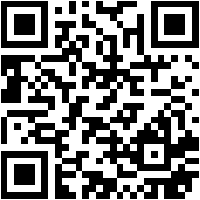