© The Author(s) 2021. Open Access This article is licensed under a Creative Commons Attribution 4.0 International License (https://creativecommons.org/licenses/by/4.0/), which permits unrestricted use, sharing, adaptation, distribution and reproduction in any medium or format, for any purpose, even commercially, as long as you give appropriate credit to the original author(s) and the source, provide a link to the Creative Commons license, and indicate if changes were made.

Aim: The aim of this study was to analyze nose shape and size in subjects with sagittal facial deformities.

Methods: One hundred fifteen subjects were included for orthognathic surgery; the previous cone bean computed tomography was used to perform the analysis. The sample consisted of 46 males (40%) and 69 females (60%); the nasal morphology in frontal view and profile, the deviation of the nasal septum, the skeletal class and the sagittal position of the maxilla were compared using the Spearman test, considering a P value < 0.05.

Results: Males had a greater vertical nasal skeletal measurement (P = 0.0006), greater cartilaginous nasal height (P = 0.0001) and greater horizontal distance between the A point and Prn (P = 0.001). Considering the sagittal position of the maxilla, subjects with maxillary prognathism had a higher nasal morphology value than subjects with a retrognathic maxilla. In addition, nasal septum deviation was statistically related to facial class II (P = 0.03) with significantly more deviation than class III subjects.

Conclusion: It may be concluded that there are variables in facial deformities related to nose shape and have to be included in the surgical plan for orthognathic surgery or rhinoplasty.

Facial proportions and symmetry are important in the perception of beauty and function[1]. Harmony of the face, mouth and nose plays an important role in this scenario. Facial deformities could affect techniques and protocols for functional and aesthetic treatments[2-4].

On other hand, some patients with facial deformity are associated with nasal deformities and could be treated by orthognathic surgery and rhinoplasty to improve function and aesthetics[7,8], since both techniques are significantly related to facial symmetry, function, stability and aesthetics[9].

The aim of this study was to analyze nasal morphology in subjects with different types of facial deformities and to assess some variables to use in diagnosis and surgical planning.

A descriptive study was conducted in male and female Caucasian subjects from Chile (South America), included for orthognathic surgery prior to the use of orthodontics. We excluded subjects with previous facial surgery, history of facial trauma, facial syndromes or conditions with significant morphological alteration and subjects with facial asymmetries due to deviation of the chin of more than 5 mm from the midline of the face. The subjects signed an informed consent form. The study was conducted in accordance with the Declaration of Helsinki, while protecting the integrity of the participants.

A 3D image obtained by cone-beam computed tomography was used and analyzed in the NewTom 3D software, model VGi EVO (Verona, Italy), with visualization field of 24 cm × 19 cm and exposure parameters: 110 kV, 8 mA and 15 s. The image was obtained by a radiology specialist; the patient was placed in a vertical position, keeping the lips at rest, without forcing a body position; the patient remained in a resting position for the image capture.

Sagittal analysis of the maxilla 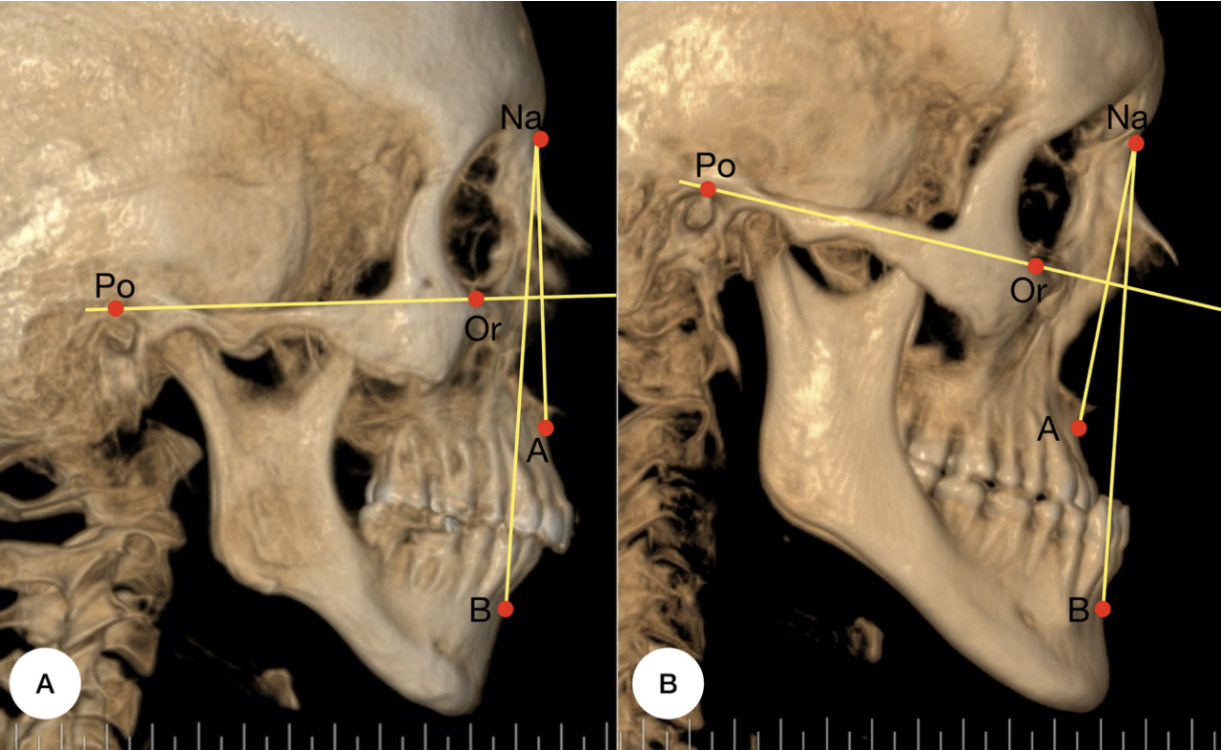 Maxillary position: The Frankfurt plane was used, formed by the points Po-Or (porion: upper point of the external auditory canal; orbitale: lowest point of the orbit) and a perpendicular line was drawn passing through the Na point. To determine the position of the maxilla, the McNamara analysis was used, which measures the distance from the A point to the perpendicular (normality parameter 1 mm).

In the frontal analysis, the Ricketts analysis was used to determine nasal height and width. The length of the nasal cartilage vertically was obtained by the measurement performed by Olate et al.[10] [Figure 2].

Nasal skeletal height: From the median point between the ZR-ZL points (transverse line that joins the right and left frontozygomatic sutures), a perpendicular line was drawn to the ANS (anterior nasal spine: most anterior point of the premaxilla on the median sagittal plane).

Nasal skeletal width: The distance between the right and left most lateral points of the pyriform cavity in the lower third of the nose (CN-CN).

Cartilaginous nasal height: The distance was determined from the lowest midpoint of the suture between the 2 nasal bones (NB) and the ANS.

To measure the deviation of the nasal septum, the measures proposed by Serifoglu et al.[11] were used: a vertical line was drawn from the highest point of the crista galli; an angle line from the same point was in a tangential direction to the most deviated point of the septum (DT), obtaining a deviation angle. The classification described by Gencer et al.[12] was used, considering the deviation to be slight with an angulation < 9°, moderate with an angulation between 9° and 15° and severe greater than 15°.

Nasal length: The measurements proposed by Olate et al.[10] were used, which use the ANS, A point and the Prn point (pronasal: most anterior and prominent point of the tip of the nose) as a reference, relating nasal hard tissue and maxillary position in a linear measurement to the Prn.

The measurements were taken by the same observer twice, with a 2-week interval between times. Using the kappa index, an agreement of 0.82 was observed. The results were tabulated and subjected to statistical analysis. A 95% confidence interval was used. In addition, the Spearman test was performed to determine the correlation between the variables. A value of P < 0.05 was considered to determine significant differences. 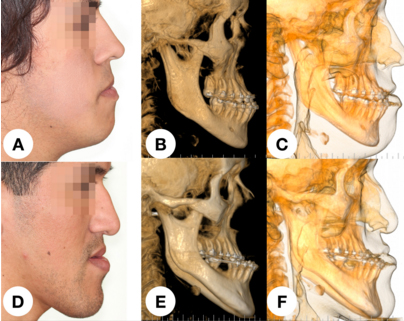 Figure 4. Sequence of subjects under class III facial deformity. A and D showing the classical skeletal patterns involved in sagittal deficiency of the middle third of the face. B and E show the morphology related to the maxillary bone and the concavity observed in the lateral area of the nose. C and F show the ratio bone-to-soft tissue; the concavity and the position of the maxillary bone and anterior nasal spine is related to lack in support for the lower area of the nose. The more posterior pyriform contouring will show a poor support for soft tissue and the cartilage of the nose. 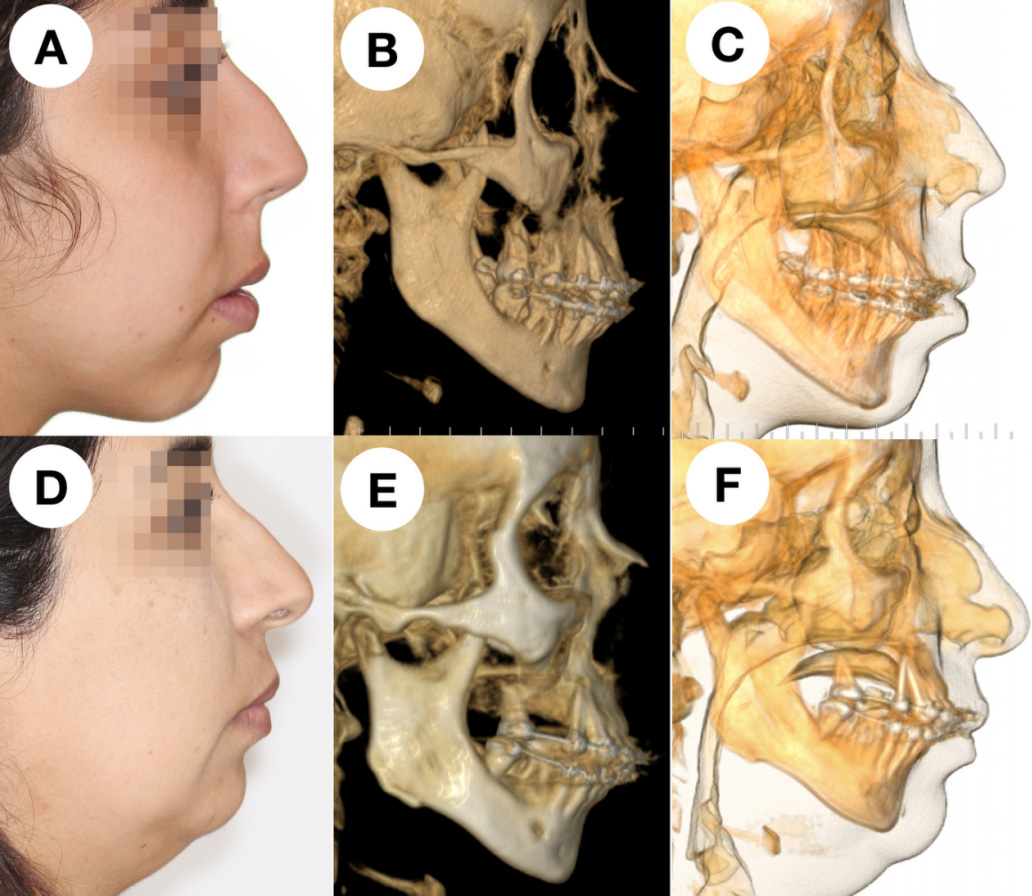 It was observed that class II subjects displayed significantly greater cartilaginous vertical height (NB-ANS, P = 0.03), greater distance between the ANS point and Prn (P = 0.03), greater distance between the A point and Prn (P = 0.03) and a more open nasolabial angle (P = 0.02) [Table 3]. In addition, when comparing the variables of facial deformity and nasal septum deviation, differences could be established (P = 0.03), showing the class II subjects with significantly more deviation of the nasal septum than the class III subjects [Table 4].

Distribution frequency of the facial class with nasal septum deviation

*Indicates a statistically significant difference. N: Subjects included for each characteristic in the cephalogram.

Nasal morphology is linked to facial morphology and the results of this study showed significant relations between some variables. The mode of breathing and nasal anatomy have been related to facial characteristics and the development and shape of the face[13,14]. For that reason, the surgical correction of maxilla, mandible and nose could increase postoperative patient satisfaction[15-17].

Our results showed some relations between the aspects of nasal and facial morphology. Maxillary position reported significant relations with the morphology of the nose, being linked to the sagittal increase in the nose as well as in the nasolabial angle in subjects with facial class II; likewise, these variables were significantly smaller in subjects with facial class III. It is possible that in the case of maxillary retrognathia, there would be a smaller nose and a descending nasal tip, whereas the prognathic maxilla would show greater sagittal dimensions at the base of the nose together with an increase in the rotation of the nasal tip associated with an increase in the nasolabial angle. Figure 4 and Figure 5 show a good approach to the morphology of the maxillary bone and the conditions observed in the nasal support. In the nasal anatomy and development, multiple variables are included to obtain the final morphology; however, the maxillary support and the pyriform morphology could be important variables in the final anatomy and position of the nose.

In terms of vertical and sagittal size of the nose, facial class II subjects showed a significantly larger size than the subjects with facial class III. These data are interesting since limited studies have shown nasal morphology related to facial deformities[21-23]. Posnick and Agnihotri[24] indicated that in subjects with facial deformity, there is a high likelihood of observing functional nasal alterations due to a septum deviation, turbinate hypertrophy or opening of the nasal cavity, showing the role of nasal anatomy and function in a facial deformity condition.

In the case of orthognathic surgery, nasal change will be observed with increase in width of the base and raising of the tip[25-27]. Waite and Matukas[28] reported that rhinoplasty together with orthognathic surgery had to be performed in cases of aesthetic or functional deviation of the nasal septum, minor defects of the tip or morphology of the alar base and in cases of serious deformities of the nasal bridge[29]. They showed 63% nasal deformity in facial class II and 60% nasal deformity in facial class III submitted to combined procedure. Accordingly, 94% of patients submitted to orthognathic surgery and rhinoplasty accepted the last procedure because it could be done in one surgical time[8].

This article shows the importance of performing a complementary morphological analysis of the face. On the other hand, the size and composition of the sample, ethnic origin and age are important factors in facial surgery, and new research is still necessary in this field. However, this article shows some data of value for new approaches. It may be concluded that there are some variables in class II and class III facial deformities linked to nasal morphology. Nasal morphology has to be included in the orthognathic and orthofacial surgery plan to improve the function and aesthetics of the face.

The study was conducted in accordance with the Declaration of Helsinki, ethical approval 069/16.

The presented individual details and images were obtained with the patient’s consent for publication. 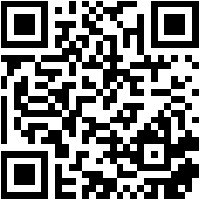