The keystone-design perforator-based flap for leg defects: a synthesis of philosophies

Aim: The classical keystone-design flap, although elegantly employed for various trunk defects, has limited movement on the leg. This study aims to modify the keystone–design flaps for leg defects.

Methods: A keystone-design flap, in which perforators are identified and dissected, is described specifically for elliptical defects overlying the tibia.

Results: It retains the unique advantages of both the perforator island flap concept as well as the keystone-design philosophy.

Conclusion: The technique as well as the possibilities of raising such flaps over various areas of the leg is outlined.

Leg defects can be intriguing to treat. Paucity of local tissue has necessitated free flaps especially in the lower third. Reconstructive options have increased with the arrival of perforator-based flaps. These island flaps are versatile in design. Chiefly, the types of movement described are V-Y advancement and propeller. The perforator anatomy of the leg is well elucidated.

The keystone-design flaps were introduced by Behan.[1] Four types are described. In the classical technique, very limited elevation of the flap from its bed is performed. Perforators from the bed of the flap are presumed, but never identified. Keystone flaps have come up as the chief local option for reconstruction of various defects over the trunk.[2] However, difficulties have been encountered in using this flap for lower extremity reconstruction.[2]

A modification is proposed, which combines the philosophies of perforator-based flaps and the keystone-design, to maximize flap advancement.

From April 2012 to March 2013, a total of five patients underwent the keystone perforator-based flap. All of them had defects with limited soft tissue remained over the leg, exposing the tibia. All flaps survived without complications. Two of these are illustrated below.

Perforators over the leg are Doppler marked preoperatively. This is essential for flap planning, especially over the area adjacent to the defect. A keystone-design flap is marked on the skin adjacent to the defect. The flap is located on the medial calf for a defect on the upper leg, and on the lateral aspect for a defect on the lower leg [Figure 1]. Factors involved in flap planning are dermatomal territory, laxity of local skin, and distribution of Dopplered perforators. The outer curvilinear part of the keystone-design is incised first to the subfascial level. This incision also doubles as the exploratory incision for finding perforators. In contrast to Behan’s concept, subfascial dissection is performed, and all perforating vessels identified. One or more dominant perforators are preserved. The rest of the incisions are completed, and the flap islanded. The inner curvilinear edge of the keystone flap is advanced medially for coverage of the defect. An advancement of 3 cm can be obtained; further advancement would require skeletonization of the perforators. The defect is narrowed by closing either ends in a V-Y fashion. This redistributes tension on the inset also. Interrupted simple sutures are placed. We do not require elaborate suturing (in the HEMMING pattern) as is done in the classical keystone-design.[2] Primary closure of the secondary defect can be achieved especially in the upper leg. In the case of the lower leg, closure requires a skin graft. Two clinical examples are illustrated. 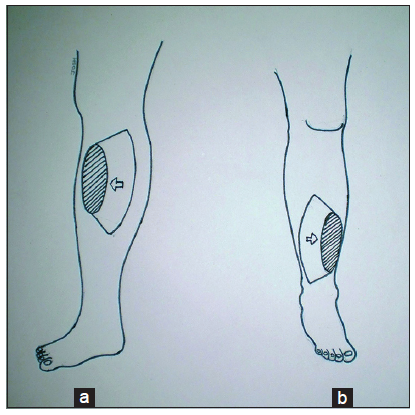 The patient with squamous cell carcinoma

A 50-year-old woman underwent wide local excision of squamous cell carcinoma over the pretibial region of her left leg [Figure 2]. A 20 cm × 9 cm keystone-design perforator-based flap was marked over the medial calf after identifying three perforators with Doppler. These were found to arise from the medial sural artery on exploration. The flap was islanded on these perforators and advanced medially to cover the tibia. Part of the primary defect medial to the exposed bone was skin-grafted. The secondary defect was closed primarily. Healing was uneventful, and the patient is asymptomatic, two years after the surgery.

Figure 2. (a) The defect in the leg after excision of a malignant tumor. Upper and middle third of the tibia is exposed. (b) line diagram of keystone flap adjacent to the defect. (c) the keystone flap outline with perforators marked by Doppler. (d) postoperative view

The patient with Grade IIIb fracture

A 21-year-old male presented with Grade IIIb fracture of both bones of the right leg. The tibia was exposed over the middle third-lower third junction [Figure 3]. A 16 cm × 7 cm keystone-design perforator-based flap was designed over the lateral lower leg. The flap was islanded after identifying and skeletonizing two perforators of the anterior tibial artery. The flap was advanced medially over the site of fracture. The secondary defect was covered with a skin graft. Further, the patient underwent intramedullary nailing of the tibia, successfully. 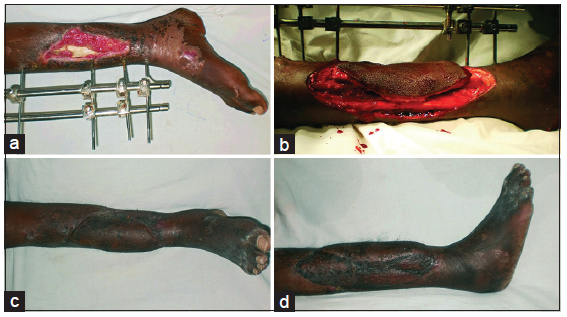 The keystone perforator-based flap is best suited for a defect in the shape of a vertical ellipse with its long axis parallel to the tibia. Such is the ingenuity of the keystone-design that the reorientation of local tissue is akin to performing three V-Y flaps.[3] Advantages are: (1) Replacement of like with like, (2) absence of dog ear, (3) preservation of multiple perforators ensuring flap survival, (4) usage of the best flap design for local tissue recruitment, and (5) potential for primary closure of even the secondary defect (albeit only in the upper half of the leg).

Neither the keystone concept nor the perforator concept is new. In the classical keystone concept[1] and some of its modifications,[4] perforators nourishing the flap are assumed to be present. The advancement obtained by skin incision and limited elevation has been questioned.[5] In the classical perforator concept, the emphasis is on dissecting perforators and not on design of the skin island. In the leg, where there is relatively no lax skin, these two concepts can be amalgamated with success.

In the present series, perforators were Doppler marked preoperatively. These were then identified and dissected, aiding in the advancement of the flap. Such a method maximizes the advantage of flap design without compromising on flap vascularity. In short, the key message of this small case series is to emphasize perforator identification, visualization, and preservation, while elevating keystone flaps on the leg.

We find a parallel to the discovery of this idea, in the evolution of the propeller perforator concept. The propeller flap was originally described for coverage of elbow or axillary defects. The flap had a central adiposofascial pedicle, which contained perforators. The existence of these perforators was presumed, and they were never actively sought for or identified. However on the lower extremity, most propeller flaps are nowadays elevated on a single perforator, painstakingly skeletonized and twisted up to 180°.

In the present series, care was taken to include only limited defects of the lower extremity, which required a local flap to advance up to 3 cm. Some important limitations have to be mentioned. Free tissue transfer is the primary choice especially for larger, posttraumatic defects. A split thickness graft close to the site of the flap may not be ideal for patients undergoing cancer excision, as they require radiotherapy. It is difficult to elevate the skin-grafted tissue for future operations too.

A keystone-design perforator-based flap is based on a synthesis of well-established concepts. It provides a solution for performing a local flap in a difficult region such as the leg, where lax and mobile skin is at a premium. 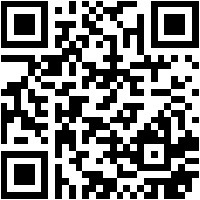