Aim: Although not very popular, the olecranon bone graft is a useful option for this type of operation due to the minimal donor morbidity and its ease of use in small bone defect reconstruction and non-union therapy. To our best knowledge, few studies have evaluated the use of the olecranon bone graft as a treatment for non-union after distal finger replantation. Our aim in this report was to present our experience of using olecranon grafts in our nonunion patients undergoing distal replantations.

Methods: Between 2013 and 2019, a total of 14 patients who developed nonunion or had segmental bone defects due to the injury were included in the study. Retrospectively the results were analyzed in terms of complication and union rates.

The first successful finger replantation was performed by Tamai, and major advances in replantation surgery have been made since then[1]. Today, the survival of the replanted finger is no longer a sufficient criterion for success; rather, functional recovery is considered crucial.

Distal replantations, and especially those distal to the distal interphalangeal joint, are technically difficult, but many are likely to be functionally successful[2]. Adequate vascular repair affects replant viability in the short term, but functional success is largely affected by bone fixation. The rate of the union in distal phalanx bone fractures is quite high; however, nonunion sometimes occurs due to inadequate fixation, segmental bone loss, soft tissue problems, and infection[3]. Patients with nonunion often experience instability, pain, and radiological abnormalities. In those cases, a bone graft may be required.

Although not very popular, the olecranon bone graft is a useful option for this type of an operation due to the minimal donor morbidity and its ease of use in small bone defect reconstruction and nonunion therapy. To our best knowledge, few studies have evaluated the use of the olecranon bone graft as a treatment for nonunion after distal finger replantation. Our aim in this report was to present our experience of using olecranon grafts in our nonunion patients undergoing distal replantations.

This study included a total of 14 (13 male and 1 female) patients who developed nonunion or segmental bone loss after replantation surgery between 2013 and 2019. Finger amputations of these patients were distal to the distal interphalangeal joint. Four amputations were at the Tamai zone 2 level and ten amputations were at the Tamai zone 1 level. The mean age was 34.5 years (range 19-54). Two patients had multiple finger amputations. Seven patients had crush amputations and seven patients had avulsion amputations. Two patients had segmental bone loss secondary to injury during the first surgery, and these defects were not reconstructed in the first operation to avoid vascular problems. In the other 12 patients, nonunion was diagnosed at the end of the fourth month based on radiological and clinical findings.

During the initial treatment, K-wires were used for all amputated fingers. Infection occurred in 3 patients, partial necrosis of the nail plate in 6 patients, segmental bone loss in 2 patients before initial surgery, and possibly inappropriate fixation in 3 patients that caused nonunions. The initial injuries were located at the arthrodesis site in 1 patient, at the tuft in three patients, and at the shaft of the distal phalanx in 10 patients.

All surgeries were performed by two senior surgeons under axillary regional anesthesia. A 3 cm incision for bone graft harvesting was made starting 1-1.5 cm distal to the tip of the olecranon [Figure 1]. The periosteum was incised and elevated off the donor site of the olecranon. A cortical fenestra was elevated and preserved to expose the medullary space. The cancellous bone graft was harvested with an osteotome. The cortical piece was replaced and closed after harvesting the graft to prevent irregularity at the donor site. Cancellous bone grafts were used in all patients. The periosteum was repaired with absorbable sutures, with the skin sutured individually. Postoperatively, no splint was used for elbow immobilization. 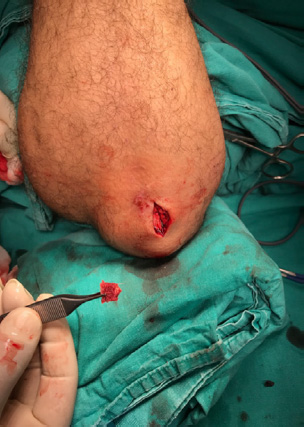 Figure 1. A 3 cm incision for bone graft harvesting was made starting 1-1.5 cm distal to the tip of the olecranon

The recipient site was reached through a unilateral incision made either lateral to the nail plate or through the nail plate, depending on the nail plate situation. The fibrous tissue was removed at the nonunion line until the healthy bone was excised. The bone graft was placed and fixed with one or two K-wires. The size of the bone grafts ranged from 20 mm × 6 mm × 6 mm to 3 mm × 3 mm × 4 mm.

Patients were discharged from the hospital on the same day as the operation. They were all given parenteral antibiotics during the hospital stay and continued to take oral antibiotics for 5 days after the operation. The operated finger was splinted for 6 weeks. The K-wires were removed at the end of the sixth week. The patients were assessed for pain, deformity, and instability after removal of the K-wires and during the post-operative visits. All patients had a final X-ray taken at least 6 months after bone grafting.

The mean follow-up period was 37 months (range 8-72 months). No major complications were seen in the donor region of the olecranon. One patient developed a hematoma in the donor area, but this issue was resolved after drainage. No fracture, palpable irregularity, discomfort, or pain was detected in the donor area in any of the patients.

One patient developed necrosis of the nail bed and the graft was exposed. The defect was covered with a local flap and no complications were seen after this revision. No viability problems were experienced in any replant after bone reconstruction. The radiological union was detected in all 14 patients at 6 months postoperatively [Table 1]. No pain, deformity, or instability was detected in the fingertip in any patient. We haven’t seen any hypertrophic scars in the donor area.

Location of nonunion and complications with the management of them

A 45-year-old male patient underwent operations for 3 finger amputations [Figure 2]. The initial surgery, performed as a 3 finger replantation, was successful. Segmental bone loss was evident in the amputated 3rd finger, and the union line was probably distracted during fixation with the K-wire. These features resulted in nonunion in the 3rd finger, as confirmed by x-rays taken in the 6th week [Figure 3]. At 7 weeks after the first operation, an arthrodesis with an olecranon graft was performed on the 3rd distal interphalangeal joint [Figure 4]. The thickness and stability of the nail bed were suitable, so grafting was performed through the incision in the middle of the nail bed [Figure 5]. Six months after the olecranon bone grafting, the bony healing was complete [Figure 6]. 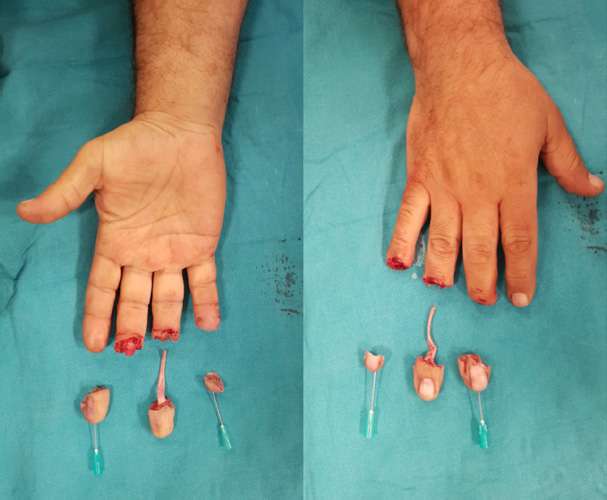 Figure 2. The patient had three fingers amputation due to an industrial accident 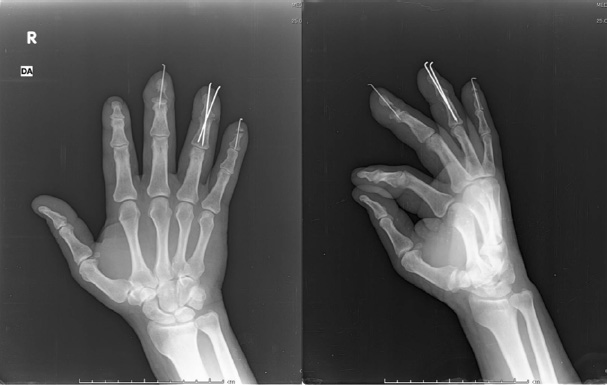 Figure 3. Segmental bone defect can be seen in the distal phalanx of the third finger 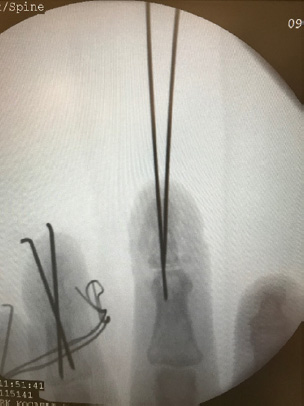 Figure 4. At 7 weeks after the first operation, an arthrodesis with an olecranon graft was performed on the 3rd distal interphalangeal joint 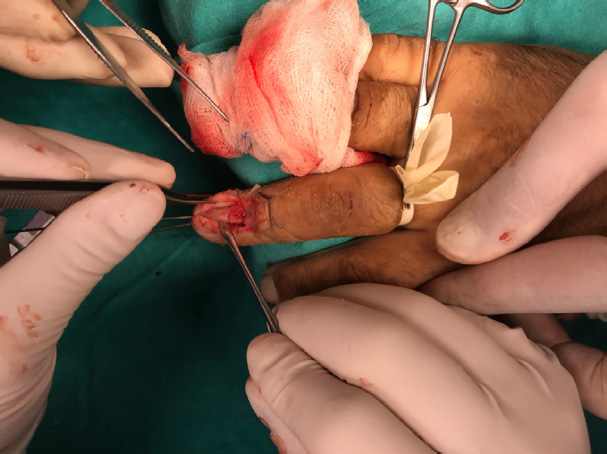 Figure 5. For this case, the thickness and stability of the nail bed was suitable, so grafting was performed through the incision in the middle of the nail bed 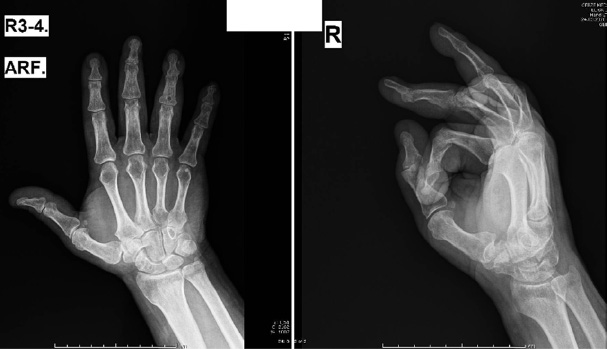 Figure 6. Six months after the olecranon bone grafting, the bony healing was complete

Prehensile ability is essential for hand functions and requires a sensible and stable fingertip grip[4]. Whenever it is technically possible, distal fingertip replantation is the gold standard method for replacing a missing fingertip[2]. Replantation gives the best result, both cosmetically and functionally, in fingertip amputations, but the functional outcome depends on sensory recovery and stability. A nonunion impairs the stability of the fingertip[5].

Bone fixation methods used for replantation should be simple, rapid, and consistent, so they should cause minimal injury to bone and soft tissue[5]. The reported nonunion rate after replantation is between 3% and 19% in different studies[1,6-8]. Autologous bone grafts harvested from the iliac crest are commonly used in reconstructive surgery. The bone promotes bone healing in fractures and provides structural support for reconstructive surgery[9]. Iliac bone grafting can be performed under general anesthesia, but major complications include abdominal hernia, vascular injuries, deep infections at the donor site, neurologic injuries, hematoma, and iliac bone fractures. Harvesting of an iliac crest bone graft can, therefore, be associated with significant morbidity[10].

Another option for cancellous bone grafting is the distal radius cancellous graft[9]. This graft type has the important advantage that it can be performed under an axillary block and in the same surgical field. The complication rates for harvesting bone grafts over the distal radius are as low as 1.7%[9], but they can include fracture at the donor site, local infection, DeQuervain’s tenosynovitis, and neuroma of the superficial radial nerve[11]. Patel et al.[11] reported an overall complication rate, including bone graft failure, of 4%, as 38 patients (2.3%) required re-grafting with iliac bone, 21 patients (1.3%) developed DeQuervain’s tenosynovitis, and 2 patients (0.1%) developed superficial radial nerve neuromas.

Although not very popular in previous studies, the olecranon graft is used as the first choice by the authors for the treatment of a distal phalanx nonunion. This graft has the important advantage that it can be performed under an axillary block and in the same surgical field. The graft can be used as a bone chip in amorphous, irregular, and small defects or it can be used as a structural cancellous graft in longitudinal defects. Harvesting takes about 10 min by the author. In addition to the short duration of the surgery, its other advantage is that the graft can be easily shaped with a scalpel. The donor site is also distant from important neurovascular structures, so the dissection can be done quite easily. The site can also be harvested with a trephine, which provides a further advantage of minimal scarring[12].

A major disadvantage of the olecranon graft is that a sufficient graft may not be obtained for large defects. This graft is also not recommended for use in elderly or osteoporotic patients[9]. Ozçelik et al.[3] reported the successful use of cancellous olecranon grafts for treating nonunion of distal phalangeal fractures in 11 cases.

The timing of the bone grafting is also important. Jupiter et al.[13] recommended waiting 4 months after the initial surgery, based on clinical and radiological findings. We haven’t experienced any spontaneous union after 4 months too. Therefore, we had 12 of our patients wait 4 months for the surgical intervention for their nonunions. In two patients, the defect present at the replantation stage was evaluated as a segmental defect. Therefore, after vascular stabilization, grafting was performed without waiting for 4 months.

When using this technique, we preferred a mid-lateral approach to the distal phalanx as it does not disturb the vascular circulation. Ozçelik et al.[3] preferred a mid-lateral incision for the 11 patients in their study. In cases where the nail bed is stable and thick, grafting can also be done through the nail bed. However, although this approach is more advantageous in terms of exposure, the graft may become exposed after dehiscence of the nail bed. Itoh et al.[4] preferred grafting with a mid-palmar incision, which is advantageous in terms of exposure but has a theoretically higher risk of vascular injury and the possibility of painful scarring. With the mid-palmar technique, which Itoh et al.[4] applied in 6 patients, no patient had any vascular or sensory problems.

The data that support the findings of this study are available on request from the corresponding author, (initials). The data are not publicly available due to (restrictions e.g. their containing information that could compromise the privacy of research participants).

All ethical approvals and informed consents were obtained according to Helsinki Declaration.

Authors provide consent to publish before publication of the work.