Division of Plastic and Reconstructive Surgery, Department of Surgery, , .

Aim: The rationale of using liposuction to treat lymphedema is that the chronic inflammatory process of lymphedema results in fat hypertrophy. The authors describe the technique of indocyanine green lymphangiography-guided liposuction, its rationale, and our patient selection criteria for better clinical outcomes.

Conclusion: Liposuction is a valuable treatment for breast cancer-related lymphedema. We believe patients with fat predominant lymphedema are the best candidates for liposuction.

Although lymphedema starts off as lymph stasis, the disease is not purely obstructive in nature. The stasis of protein rich lymphatic fluid in the subcutaneous plane causes infiltration of immune cells and activation of inflammatory cascade, which in turn lead to chronic inflammation of the subcutaneous plane. The end results of chronic inflammation include fat hypertrophy and fibrosis of lymphatic vessels and connective tissue[1-6].

Physiological operations, e.g., lymphaticovenous anastomosis (LVA) and vascularized lymph node transfer (VLNT), aim at the restoration of normal lymphatic flow[7-9]. However, there is no evidence that these physiological type operations can reverse fat hypertrophy. Therefore, excisional treatment is mandatory to achieve a significant limb size reduction in patients with fat hypertrophy.

In our institute, both physiological and excisional operations are available for lymphedema patients. We consider liposuction is a valuable tool for breast cancer-related lymphedema (BCRL). In this article, patient selection and the indocyanine green (ICG) lymphangiography-guided liposuction technique are explained.

Institutional review board approval was obtained for this study. For the patient selection, only two groups of BCRL patients were included for liposuction. The first group was those who had fatty phase of BCRL; these patients may or may not have received prior surgical treatment of lymphedema. The second group was the good responders after receiving VLNT in our institute.

Detailed history taking and physical examination were performed during clinic consultation. Special attention was paid to the softness and the nature of edema of the patient’s diseased limb. Patients with soft limb and non-pitting edema are the best candidates for liposuction [Figure 1]. At the other end of the spectrum, patients with tense, fibrotic limb and severe pitting edema were excluded from liposuction.

Figure 1. Physical examination can provide useful information on the degree of fluid retention in the edematous limb. In this patient with left upper-limb breast cancer-related lymphedema, her limb was soft and there was no indentation after pressing on the skin. These findings signified that the limb was fat predominate. Patients with fatty phase of lymphedema are the ideal candidates for liposuction

For patients who were worked up for liposuction, bioimpedance analysis (BIA) was performed as a baseline measurement before operation. Liposuction was only offered to patients who had BIA value < 50.

Between January 2015 and December 2018, 32 consecutive patients with BCRL were included in this study. All patients had unilateral upper-limb lymphedema, i.e., the total number of upper limbs treated was 32. The mean age was 63.4 ± 8.7 years (range, 39-72 years). All 32 patients had axillary dissection. Thirty patients received adjuvant radiotherapy. The mean duration of lymphedema was 10.4 ± 7.4 years (range, 6-20 years). The International Society of Lymphology’s staging system was adopted in this series[10]. Twenty-seven patients had Stage II disease and five patients had late Stage II disease.

Twenty (62.5%) patients had fatty phase lymphedema and none of them had received prior lymphedema surgery. Twelve (37.5%) patients were the good responders of VLNT. The mean time interval between VLNT and liposuction was 13.1 ± 2.3 months (range, 11-15 months).

After general anesthesia, ICG lymphangiography was performed by injecting 5 mg/mL ICG solution to the second and fourth web-spaces and the volar aspect of wrist subdermally, 0.1 mL to each spot. A near infrared camera system was used to capture the ICG signal 30 min after injection. The four patterns of lymphangiography findings, i.e., linear, splash, stardust, and diffuse patterns, were then marked on the skin with a permanent marker pen [Figure 2].

Usually, for average build patients, two skin incisions, around 1 cm each, over the medial and lateral aspects of elbow sufficed for the access of liposuction cannula to the whole upper limb. An extra skin incision may be made at the lateral aspect of wrist for access to the distal forearm. Tumescent suction-assisted liposuction was subsequently performed [Figure 3]. 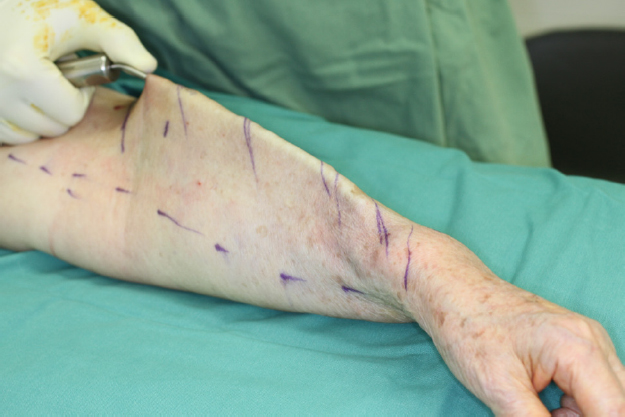 Figure 3. The same patient as in Figure 1: suction-assisted liposuction was performed until the overlying skin could be lifted with ease

Bandaging was applied to the operated limb immediately after liposuction. During the hospital stay, patients and their family members were educated on limb bandaging by our physiotherapists. Patients were usually discharged on Postoperative Day 2. Follow-up was arranged at two weeks after operation. Patients were advised to perform limb bandaging daily for at least four weeks.

The mean volume of aspirated fat was 1137 ± 126 mL (range, 1000-1400 mL). At a mean follow-up of 24.5 ± 6.5 months (range, 12-46 months), all (100%) patients had a reduction in limb circumferences [Figure 4]. Throughout the follow-up period, 24 (75%) patients had progressive reduction and reached a plateau in limb size, while eight (25%) patients had fluctuation of limb circumference. Of these eight patients, three patients were those with fatty phase of lymphedema and five were the good responders after VLNT. 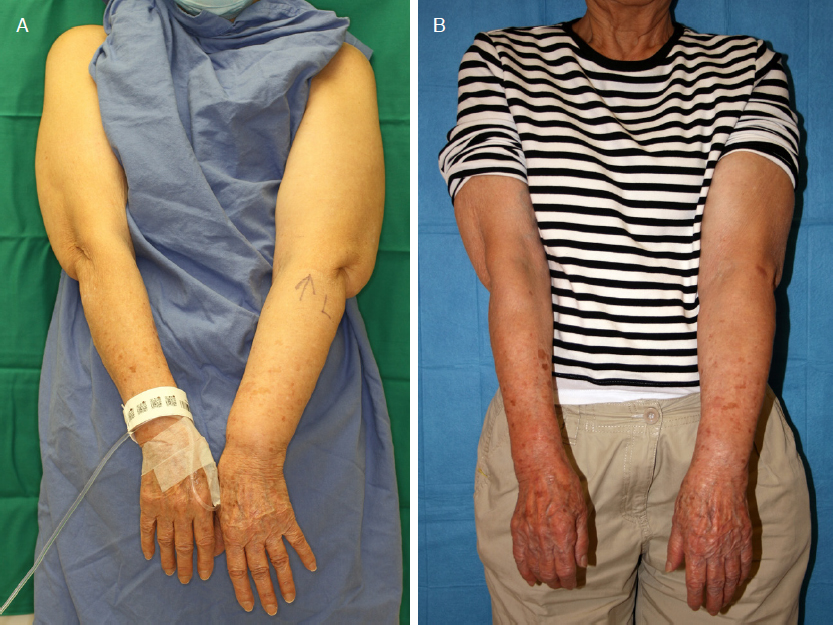 Figure 4. The same patient as in Figure 1: (A) clinical photo before liposuction; and (B) clinical photo 40 months after liposuction. The limb size was maintained with only regular use of Class I compression sleeve. When liposuction is performed in the right patients, i.e., patients with fatty phase of lymphedema, only low maintenance is required for the control of limb size

The rationale of treating lymphedema with liposuction is the fat hypertrophy caused by chronic inflammatory process[5,6]. In lymphedema, the increase in limb size is contributed by the fluid component due to lymphatic obstruction and the fatty component due to chronic inflammation. However, not every patient has the same proportion of fluid retention and fat hypertrophy. We believe that fluid predominant lymphedema is more commonly encountered in the daily practice of most lymphedema practitioners. Therefore, the International Society of Lymphology has devised its staging system according to the nature of fluid retention[10].

In theory, physiological operations such as LVA and VLNT aim at restoring normal lymphatic flow, which in turn decrease the fluid retention[7-9]. These operations are not effective in reducing the fat content of limb. Dr. Brorson et al.[11] has advocated liposuction since late 1990s[11,12]. He and his team treated lymphedema with circumferential liposuction. Preoperative ICG markings were not documented in his studies. Patients need to wear long-term pressure garments after operation lifelong.

Dr. Brorson’s liposuction protocol is difficult to follow in our locality. The main reason is the high maintenance after surgery, i.e., regular physiotherapy and long-hour pressure garment. In Hong Kong, the hot and humid weather during summertime discourages the regular use of pressure garment and frequent limb bandaging. Moreover, from our earlier experience when liposuction was performed more liberally for upper-limb lymphedema patients, we noticed the outcome of liposuction for fluid predominant lymphedema, i.e., patients with pitting, tense limb, and high BIA value, is less satisfactory. In the short term, the wound usually remained tense and firm for a longer postoperative period. In the long term, the limb size reduction was not as significant as for patients with limbs that contained less fluid. A relatively higher maintenance, i.e., more intense physiotherapy and more regular use of pressure garment, is also required to keep the reduced limb size.

To utilize liposuction as a treatment and at the same time knowing that the compliance of pressure garment and physiotherapy will be low after operation, we have to tighten the patient selection criteria to achieve better clinical results and allow patients to have a relatively low maintenance of limb after operation.

We consider patients with fatty phase of lymphedema as the best surgical candidates. The second-best group includes the patients who responded well after VLNT. The response after VLNT was assessed clinically with limb circumference measurement and pitting edema detection. BIA and traditional lymphoscintigraphy were also performed after VLNT. The effect of liposuction in these two patient groups is usually more long lasting. The limbs can stay soft and the reduction in limb size can remain for a longer time.

During the follow-up period, eight patients had fluctuation in limb circumferences. There were overall reductions in limb size after liposuction. However, there was an upward trend of limb circumferences in the middle of the follow-up period. The possible explanations include: (1) inadequate effort of postoperative physiotherapy; or (2) recurrence of fat hypertrophy.

Up until now, there is only one published paper from Campisi et al.[13] describing lymphatic vessel sparing liposuction. More than 100 lymphedema patients were included in this study. Prior to suction-assisted liposuction, lymphatic mapping with ICG and blue dye was performed. The group reported that there was a significant volume reduction after liposuction. The immediate postoperative ICG lymphangiography also confirmed no lymphatic complications. However, the imaging findings were not listed in detail.

In conclusion, Liposuction is a valuable treatment for BCRL. The role of ICG lymphangiography in improving clinical results and long-term outcomes has yet to be has yet to be proven by further study.

Data were strictly obtained from medical records, in accordance with the privacy policy and code of ethics at our institutions.

The study was approved by the University of Hong Kong Institutional Review Board (IRB reference: UW 14-098). 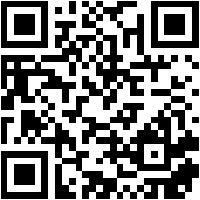