This article belongs to the Special Issue Advances in Microsurgery for Upper and Lower Extremity Reconstruction and Limb Preservation
Views:2802 | Downloads:753 | Cited:

Aim: The management of complex dorsal hand wounds with extensor tendon loss is controversial. Treatment has focused on soft tissue coverage, but there is limited evidence comparing immediate vs. staged tendon reconstruction. This review evaluates existing literature to determine the optimal management of composite hand defects.

Results: Comparison of outcomes showed that patients with immediate reconstruction had fewer operations, faster return to maximum ROM, and greater chance of returning to work. The most successful single stage flaps include the radial forearm, suitable for reconstructing one to three tendons and the dorsalis pedis for three or four tendons; however, there were significantly more complications in immediate reconstruction particularly regarding donor site morbidity. Pedicled flaps had better total active motion. The two-stage approach resulted in acceptable functional outcomes without significant complications.

Complex dorsal hand wounds present a challenging problem for hand and reconstructive surgeons. The proximity to the surface makes open injury to extensor tendons relatively common[1]. The surgical timing and flap choice for composite dorsal hand wounds are debated. Traditional management focuses on debridement, skeletal fixation, and soft tissue coverage. There is limited evidence on optimal extensor tendon reconstruction in a wound with tendinous defect. These injuries have been approached with a multitude of techniques with varying degrees of success.

The goal of extensor tendon treatment is to restore function while minimizing disability[2]. Restoration of thin, pliable tissue with reliable vascularity and a gliding surface facilitates motion[3]. Analysis of treatment options begins with assessment of the wound. The paratenon provides a well-vascularized compartment that minimizes adhesion to surrounding tissue. If paratenon is intact, skin graft or substitute matrix are viable options. When there is denuded tendon or exposed bone, reconstruction typically elevates to flap selection [Figure 1]. Numerous coverage options are available for these types of defects and are determined based on the extent of zone of injury and tissue match. An Allen’s test is vital to ascertain competence of the palmar arch for deciding upon a reverse radial forearm flap with retrograde flow or an appropriate recipient for anastomosis. A decision must be made whether immediate or staged tendon reconstruction is preferable and which fairs best with the least complications. 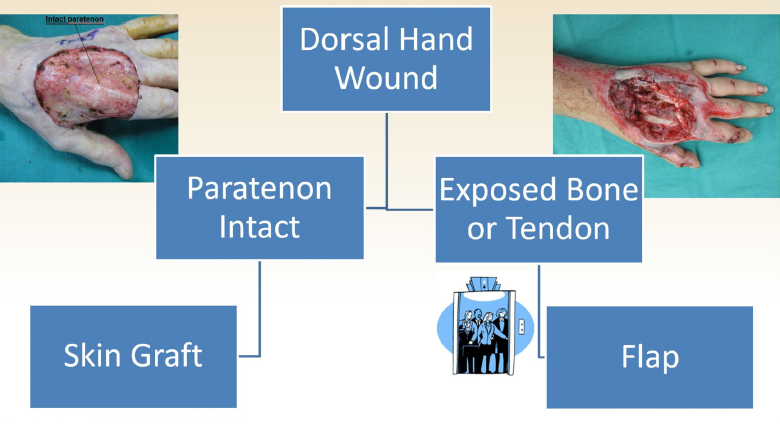 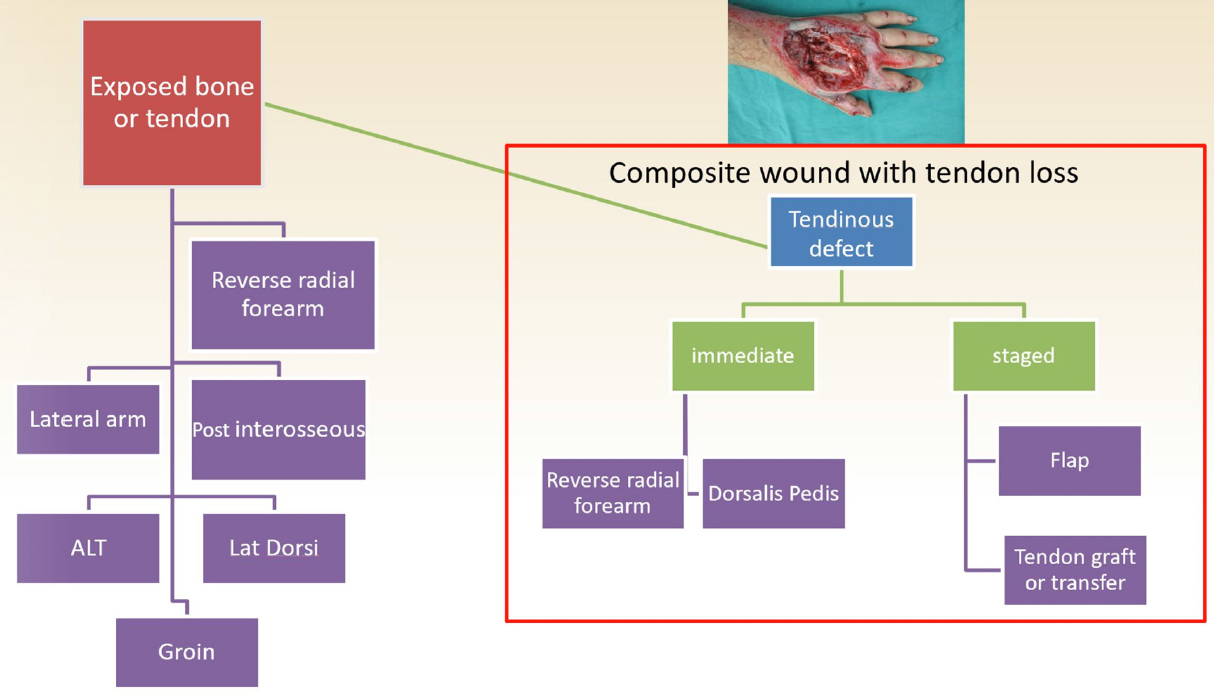 The goals of reconstruction are to provide adequate soft tissue coverage, enable tendons to glide with excursion, and provide adequate power for pull through[23]. To determine whether a specific technique for management of cutaneous-tendinous hand defects provides superior outcomes, we performed a systematic review of existing literature. We compared immediate vs. staged tendon reconstruction with evaluation of functional outcomes for evidence-based decision making.

Identification of Relevant Literature - Database search: The authors performed a systematic search of the literature using the MEDLINE database (1969 through 2017) to identify articles that included the following keywords: “extensor tendon reconstruction”. To ensure adequate coverage, the authors utilized a Boolean search for keywords: [(hand OR extensor tendon) AND (“ROM” OR ROM OR grip strength OR patient outcome OR return to work OR disability)]. The abbreviation of ROM was used to assess and locate abstracts that included that term.

Search Limits: The pool of citations was then limited to those relevant to humans and published in English. The authors limited the results to exclude case reports. Inclusion criteria required objective measurements of data analysis including: ROM, grip strength, and patient outcomes related to return to work or disability. Amputation and arthrodesis were accounted for as a confounding factor and excluded when elucidated. The review of MEDLINE using these limits and search terms identified seven reliable studies, which represented 61 patients. Data points extracted were patient demographics, surgical technique, timing of tendon reconstruction, outcomes, and complications.

Sixty one patients analyzed in this review included males and females ranging in age from 13 to 70 who had undergone either an immediate 50 or staged 11 tendon reconstruction surgery. Of the fifty immediate (single) surgery group, 39 were free flaps and 11 were pedicled. In the eleven staged group, 6 were free and 5 were pedicled flaps [Table 1].

The most reported single-stage cutaneous tendinous flaps include radial forearm and the dorsalis pedis flap. Comparisons of outcomes [Table 2] showed immediate reconstruction had significantly fewer operations, 1.5 vs. 5.2 (P < 0.001) and led to faster return to maximum ROM 214 vs. 551 days (P < 0.001). Concurrently, the patients tended to have a greater percentage of returning to work 88% vs. 43% (P < 0.04). Unplanned return to operating room for immediate reconstruction occurred in 20% whereas reoperation in addition to planned second stage occurred in ten of eleven staged reconstructions. Flap debulking was not reported as a complication in this review. Immediate reconstruction had significantly higher complication rate 36% (P < 0.001). Complications included: partial donor site graft loss, flap venous occlusion, tendon adhesions and joint contracture requiring tenolysis and capsulectomy.

Of the immediate single surgery group, 39 were free flaps and 11 were pedicled. In the staged group, 6 were free and 5 were pedicled. When comparing the pedicled vs. free flap surgeries, the pedicled group had a significantly higher metacarpophalangeal total active motion 75 vs. 55 (P < 0.007). Differences in the days to maximum ROM, complication rate, and number of operations were not significant however, and there was not enough data to compare grip strength or percent of patients who returned to work in these groups.

Our results are concordant with Sundine and Scheker[24] who found that immediate reconstruction allowed for faster return to maximum ROM, fewer operations, and a greater chance of adequate recovery for vocation. Taylor and Townsend[6] used a vascularized single-stage reconstruction utilizing a dorsalis pedis free flap, which allows for a one-stage reconstruction for most dorsal hand extensor injuries. The proposed benefit of this technique is transferring tendons with an intact vascular supply and within their tendon sheath which may facilitate faster tendon repair healing, thus allowing for rehabilitation to be initiated earlier. Scheker et al.[25] reported better function with primary reconstruction, with fewer operations, a shorter hospital stay, minimal complications, and a shorter period of disability. Adani et al.[26,27] reviewed completely vascularized single stage reconstruction using dorsalis pedis and radial forearm cutaneoutendinous flaps. Our study confirmed that there is significantly less operations required, an earlier return to maximum ROM, and greater chance of returning to work; in contrast to some reports, there was no significant difference in total active motion and significantly more complications reported in immediate reconstruction. Obvious advantages to a single stage technique include avoidings need to re-elevate the flap for tendon graft and the ability to start earlier active ROM rehabilitation. With potential expedition however comes more risk. Considering the significantly higher rate of complications mostly relating to donor site graft loss and delayed healing of foot wounds, the radial forearm flap lends to less donor site morbidity for immediate composite reconstruction.

Multiple staged reconstruction is commonly utilized for large composite defects[28]. The procedure allows for wound closure and fracture union while tendon reconstruction is commonly delayed to subsequent procedures. The staged approach resulted in acceptable functional outcomes with no significant difference in total active motion or grip strength and no significant complications. Good to excellent total active motion has previously been reported in two stage technique with rod placement for extensor zone six[29]. Anterior lateral thigh and lateral arm perforator flaps are considered ideal for coverage of dorsal hand soft tissue defects with minimal donor site morbidity[30,31]. Due to the varying presentation and degree of severity of these complex injuries, there is vast heterogeneity in the surgical management depicted. Lack of structured data collection and inconsistency in reporting outcomes limits the conclusiveness of retrospective literature review.

Tendon graft is the most common reported staged reconstruction technique; if significantly delayed, myostatic contracture may necessitate a tendon transfer for adequate power. We do acknowledge the variable postoperative protocols and compliance with therapy regimens with retrospective reviews. Early active motion is favored with the lowest rate of extensor lag, averting the need for tenolysis after static splinting. Fortunately, tendon rupture is rare[32,33]. Available evidence suggests better outcomes with dynamic over static splinting after repair of extensor tendons in Zone V-VIII of the hand[34,35]. Early mobilization after tendon transfers is also safe and beneficial in the initial rehabilitation phase[36].

Review of the literature for reconstruction of extensor hand defects provides us with a myriad of different procedural modalities to choose from. The present review was limited by lack of consistent objective measurements. Scrutiny in criteria of data collection refined the specificity and increased the reliability of evidence to draw from. Decreased sensitivity lowered the power of the study; particularly lacking data on staged reconstruction and elicitation of complications. The significantly less operations and earlier time to maximum ROM provide a basis to support and favor the use of single-stage reconstruction. By effect, immediate cutaneous tendinous reconstruction allows for expedited recovery and quicker return to work. These factors correlate with significant decreases in cost and saved productivity for quality of life. Pedicled composite radial forearm flap showed the best potential for total active motions, earlier recovery, and least complications and can include modifications of slips for tendon repair coaptation [Figure 3]. 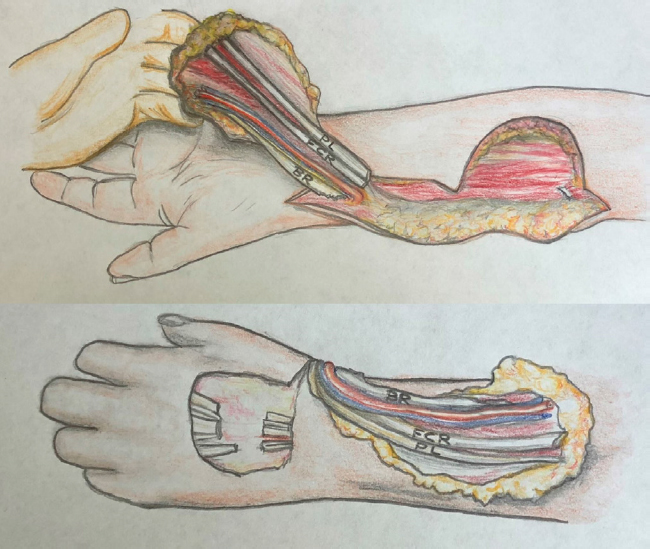 The staged approach nonetheless resulted in acceptable functional outcomes. Choice of staging tendon reconstruction can be justified in certain cases dependent on patient condition and preference.

The algorithm in Figure 4 provides some guidance in choosing the best individualized plan for this challenging problem. 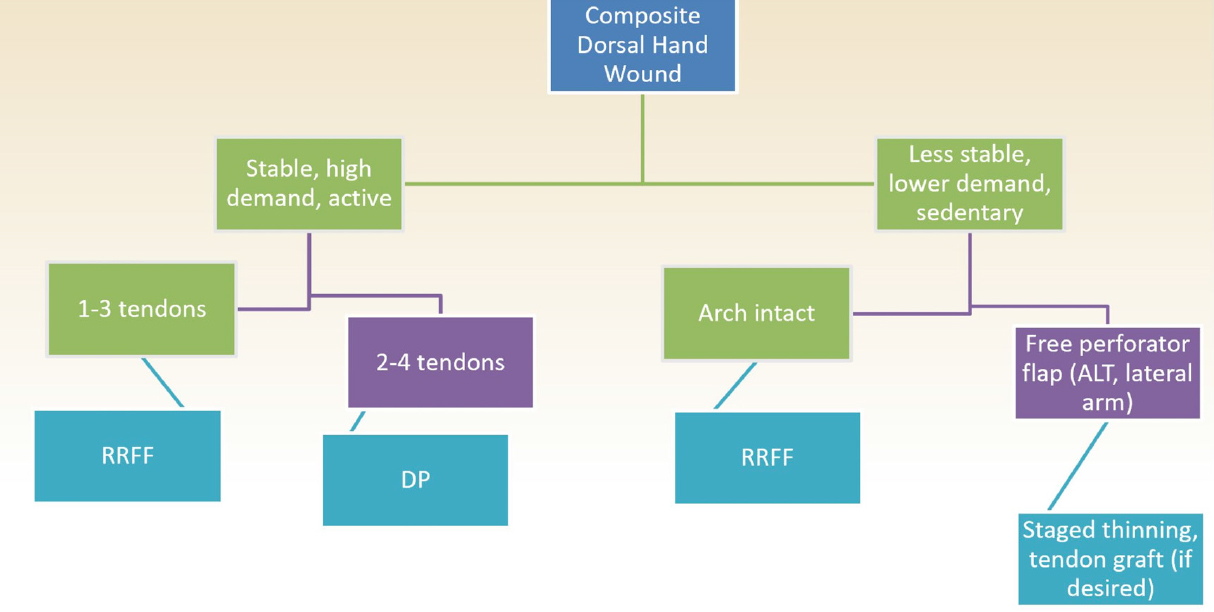 In conclusion, while this study does provide a foundation, further multi-center studies are needed to improve power. Limitations of review include retrospective recall bias, inability to stratify cohorts, variable compliance postoperative rehab regimens, and the lack of objective functional data measurements for comparison between tendon graft and transfers and the need for hunter rod pseudosheath creation. When no extensor tendon reconstruction is performed, compensatory tenodesis effect from scar contracture may be functionally tolerable to the patient. The results of total active motion in these cases are likely not followed. Future studies will look at prospective comparison risk/benefit Hunter rod placement, critical lengths of nonvacularized tendon grafts, as well as a cost analysis to compute the comparative efficacy of immediate reconstruction, particularly factoring in gain of productivity and quality of life factors. 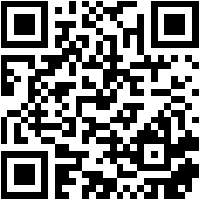