Options for thumb revascularization: our experience and literature review

A 60-year-old male sustained a mutilating injury to his dominant right thumb [Figures 1-3]. A radiograph of the right hand in the anteroposterior view showed a fracture at the level of the shaft of the proximal phalanx of the thumb [Figure 4]. Intraoperatively, transection of the ulnar digital artery was at the level of the base of the thumb. The thumb was ischemic. Skeletal fixation was achieved using Kirschner wires [Figure 5]. Dissection of the digital nerve revealed contused nerve fibers, although the fibers were intact. The ulnar digital artery was found to be transected at the shaft level with segmental loss; this segmental loss made primary repair difficult. The radial digital artery and the nerve of the thumb were contused but intact. The dorsal veins were contused. 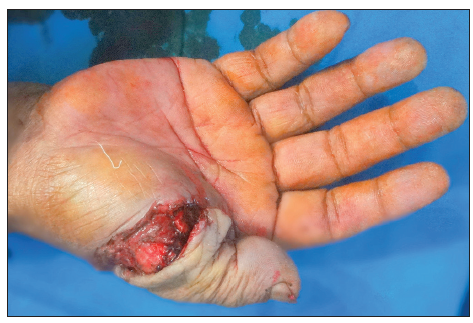 Figure 1. Crush injury to the base of the right thumb, volar aspect 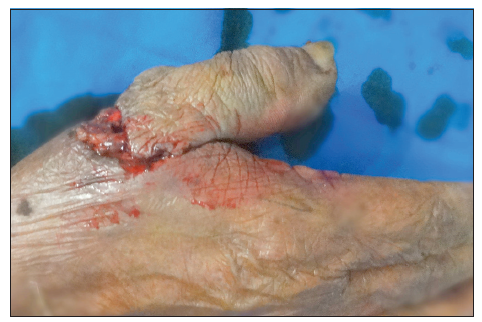 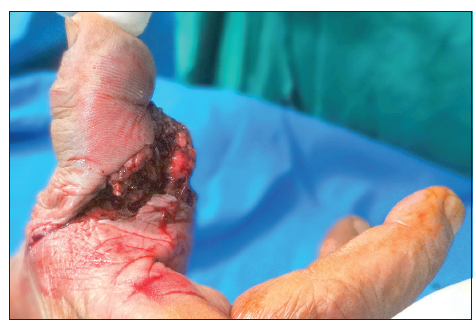 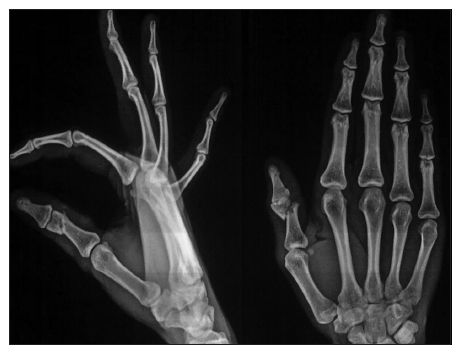 Figure 4. Radiograph of the right hand in the antero-posterior view, showing a fracture at the level of shaft of the proximal phalanx of the thumb 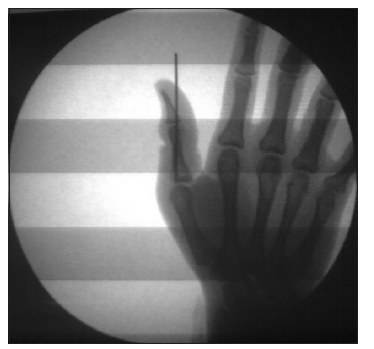 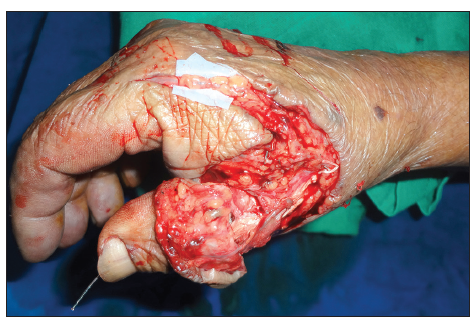 Figure 6. The superficial palmar arch and digital vein from the index finger were used to revascularize the thumb 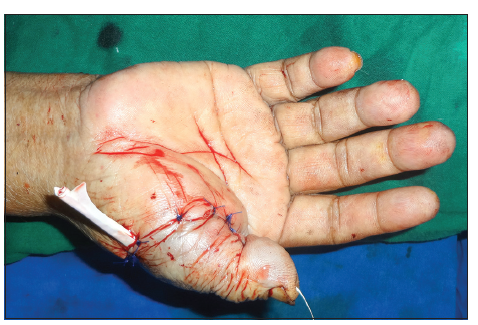 Avulsion injuries to the thumb can result in extensive damage to long segments of vessels, which makes direct suturing of the structures difficult. The decision to proceed with revascularizing an avulsed thumb depends on several factors, including the mechanism of injury, the patient’s age, occupation and hand dominance, and overall medical condition and intraoperative assessment of the injured structures. When the decision is taken to retain the thumb by revascularization, the options available are to use a vein graft to reconstruct the segmental loss or to transfer nearby vessels to adequately bridge the gap of the injured segment. Ideally, a single end-to-end primary arterial repair of the ulnar digital artery can obviate the need for two anastomotic sites, as in the case of vein grafting. 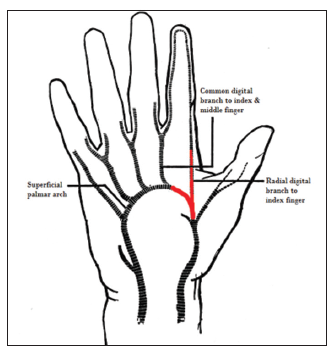 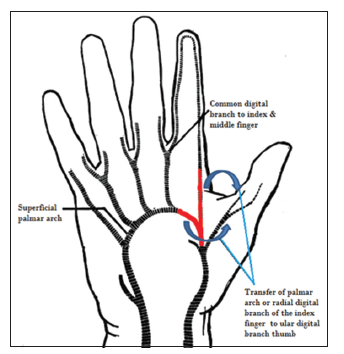 Figure 9. Schematic representing transfer of the palmar arch or radial digital artery of the index finger for revascularization of the thumb

Other methods used to revascularize such injuries, include reconstructing the injured segment with vein grafts harvested from the distal third of the forearm, vessel shift of the radial or ulnar arteries, and forming an arteriovenous fistula [Figure 10].

The advantage of the vein graft procedures is that there is no need to sacrifice the palmar arch. The disadvantages are the need for two anastomoses, and that the proximal part of the injured artery can be in spasm since it is near to the zone of trauma. This can result in an unfavorable outcome following anastomosis, with the need for further revision procedures and additional incisions for vein graft harvest. The advantages of the transfer of superficial palmar arch or radial digital artery for thumb revascularization over vein grafts are the need for just one anastomosis, which reduces the incidence of thrombosis, and that the artery borrowed for anastomosis is out of the zone of trauma, resulting in better outcomes. The disadvantage of this procedure is the possibility of loss of the index finger, although the chance of this is low as one vascular bundle is retained and there are additional arterial perforators from the metacarpal arteries.

Another method with which to salvage the thumb following crush or avulsion injuries is to shift the undamaged arteries (radial or ulnar).[4] Disadvantages of this method are scar contracture, size mismatch of the vessels, and concomitant damage to the utilized vessel.

Some authors have suggested creating an arteriovenous fistula.[5] This method is usually used when there is no suitable artery in the devascularized part. Better results are obtained when the volar veins are used for anastomosis and when there is less tension on the anastomosis between the proximal volar digital artery and the dorsal vein.[6] Morris et al.[7] have suggested that the presence or absence of venous valves appears to be an important consideration and warrants further evaluation before attempting a clinical transfer.

The principle of transposing the radial digital artery or superficial palmar arch could very well be used in cases of amputation at the level of the base of the thumb, where venous grafts may be avoided for establishing the circulation.

Revascularizing the thumb is a challenging and rewarding experience for the plastic surgeon. Knowledge of the superficial palmar arch and its anatomical variability are critical for successful revascularization. Therefore, bridging the vascular gap to repair the transected ulnar digital artery of the thumb, superficial palmar arch or the radial digital artery of the index finger could be safely transferred distally for revascularisation. 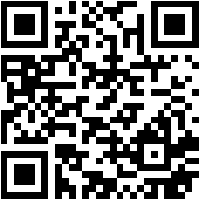