This article belongs to the Special Issue The Key to Costal Cartilage in Rhinoplasty
Views:3220 | Downloads:632 | Cited:

Aim: To assess the safety profile and practice trend of autologous costal cartilage harvest by facial plastic surgeons in the United States (US).

Methods: A 10-question online survey was distributed by the American Academy of Facial Plastic and Reconstructive Surgery to its members.

Results: Of the 2,639 members, 2,379 received the survey with 137 (5.76%) members responded. The majority (33.6%) of the respondents were expert facial plastic surgeons. One hundred and nine (79.6%) of the respondents performed rib harvest with 49.6% of them performing the procedure at a hospital facility. Among them, 21.5% exclusively performed their surgery at an ambulatory surgical center not physically attached to a hospital while 6.67% of them at the in-office accredited operating room. When comparing techniques, 64.7% performed only full-thickness rib grafts vs. 12.0% harvesting partial-thickness rib grafts. Most used an incision length between 2.1 and 4 cm (64.4%) while 2 surgeons used < 1 cm incision. The occurrence of pneumothorax after autologous rib harvest remained low (< 1%) in most (73.1%). Regarding safety practices of the surgeons, only 24.6% would order a chest X-ray post-operatively while 54.5% would not. In addition, 58.7% of respondents never kept their patients overnight for observation after autologous rib grafting while 15.0% always would. For pain management, most respondents (50.4%) did not utilize any additional analgesia protocol besides oral pain medications.

Conclusion: Two thirds of the US facial plastic surgeons performed autologous costal cartilage harvest in a hospital setting. Routine chest imaging or overnight observation post-operatively was not warranted as the percentage of pneumothorax remained low and pain control was adequate.

Rhinoplasty remains one of the most demanding operations of the cosmetic and reconstructive surgeon due to the complex three-dimensional anatomy of the nose, which serves both form and function. The nose sits in the center of a face, even the slightest asymmetry or imperfection is apparent causing significant patient distress and dissatisfaction. This may explain how rhinoplasty was the fifth most popular cosmetic procedure in 2015, with close to 218,000 performed, according to the data from the American Society of Plastic Surgeons[1]. In 2017, the American Academy of Facial Plastic & Reconstructive Surgery (AAFPRS) published a membership study which showed rhinoplasty was the most commonly performed surgical procedure among facial plastic surgeons with each surgeon performing 60 of those annually on average[2]. The revision rhinoplasty rate had been reported in the literature between 5% and 15.5% even in the hands of experienced surgeons[3,4]. Despite our best efforts, the primary surgical outcome may not be acceptable to the patient, physician or both. Many patients seek revision rhinoplasty to correct minor deformities. However, some of these cases are more involved requiring repair of cosmetic and/or functional defects.

The challenges presented by revision rhinoplasty are not only with regard to scarring and distorted anatomy, but the amount of material available for reconstruction. Residual septal cartilage and auricular conchal cartilage are first considered but often depleted especially in a multiple revision case. Auricular conchal cartilage, being a type of elastic cartilage, is also not as structurally strong as hyaline cartilages found in septum and ribs. As a result, autologous costal cartilage harvest becomes a common practice to provide cartilage material in revision rhinoplasties. Costal cartilage is sometimes used in augmentation rhinoplasty for congenitally small noses as well as in ethnic rhinoplasty for African Americans and Asians. Other options for graft source include irradiated cadaveric rib, allografts [e.g., silicone, expanded polytetrafluoroethylene (e-PTFE, Gore-tex, WL Gore and Associates, Flagstaff, AZ) and porous polyethylene (Medpor, Porex Surgical, Newnan, GA)].

An online 10-question survey [Table 1] was distributed to 2,639 members of the American Academy of Facial Plastic & Reconstructive Surgery. Survey respondents were asked about their years of experience, number of autologous costal cartilage harvest performed annually, their techniques, rate of pneumothorax, safety practices and post-operative management. Data were exported and analyzed in Excel software (Microsoft corporation).

Of the 2,639 AAFPRS members, 2,379 members received the survey and 137 (5.76%) members responded. The majority (46 of 137, 33.6%) of the respondents were facial plastic surgeons with > 20 years experience [Figure 1]. One hundred and nine (79.6%, n = 137) of the respondents performed autologous rib harvest with 49.6% of them performing the procedure at a hospital facility. Among them, 21.5% exclusively performed their rhinoplasty with autologous rib harvest at an ambulatory surgical center (ASC) not physically attached to a hospital while 6.67% of them at the in-office accredited operating room. Four respondents (2.92%) chose between a hospital facility and ASC on a case-by-case basis [Figure 2]. The number of autologous rib harvests performed annually range between 1 and > 50. Many respondents (36.6%) performed between 1 and 5 per year while two reported > 50 cases per year [Figure 3]. When comparing the surgeon’s techniques, 64.7% of them performed only full-thickness rib grafts vs. 12.0% harvesting partial-thickness rib grafts. Seven (5.11%) of the respondents would consider both full and partial-thickness depending on the circumstance. Most surgeons used an incision length between 2.1 and 4 cm (64.4%) while 2 surgeons used < 1 cm incision [Figure 4]. The occurrence of pneumothorax after autologous rib harvest remained low (< 1%) in most of the respondents (73.1%) while one surgeon reported 6%-10% of patients getting a pneumothorax [Figure 5]. Regarding safety practices of the surgeons, only 24.6% (n = 33) would order a chest X-ray routinely post-operatively while 54.5% of respondents would not. In addition, 58.7% of respondents did not keep their patients overnight for observation after autologous rib grafting while 15.0% of them always would. Nine surgeons would decide based on the patients (whether they are from out-of-town, have post-operative nausea, medical comorbidities, pain and degree of rib harvested). For pain management with rib harvest, the majority of respondents (50.4%) did not utilize any additional analgesia protocol (other than oral pain medications). Others preferred intraoperative liposomal bupivacaine injection, indwelling catheter for pain medication delivery, scheduled intravenous pain medications, pain management consult and intercostal nerve block [Figure 6]. 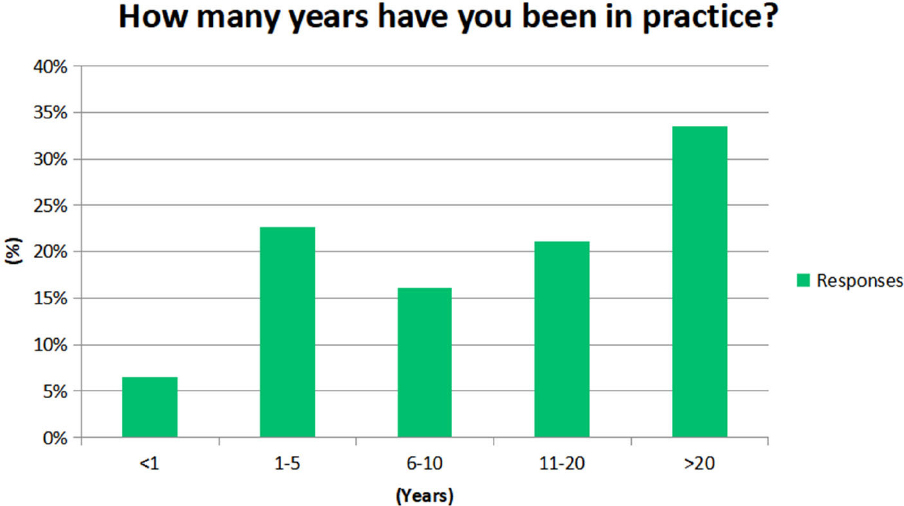 Figure 1. Number of years in practice of survey respondents 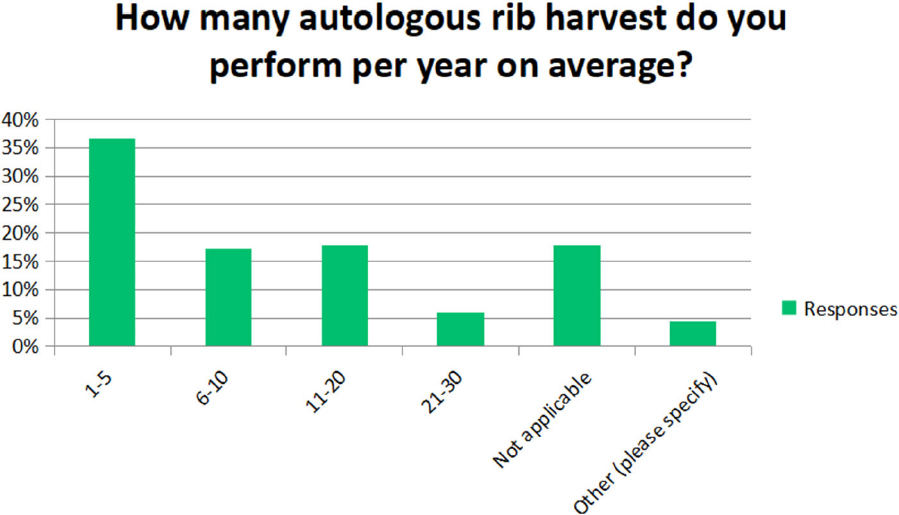 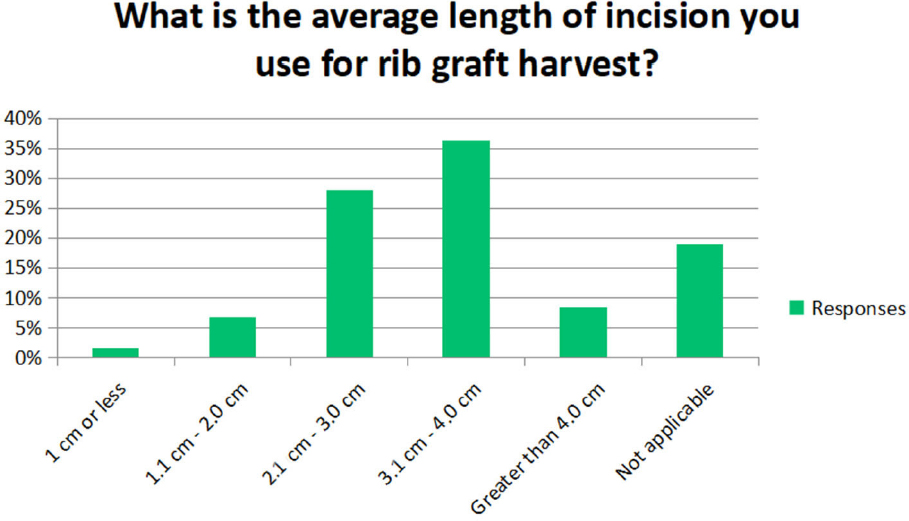 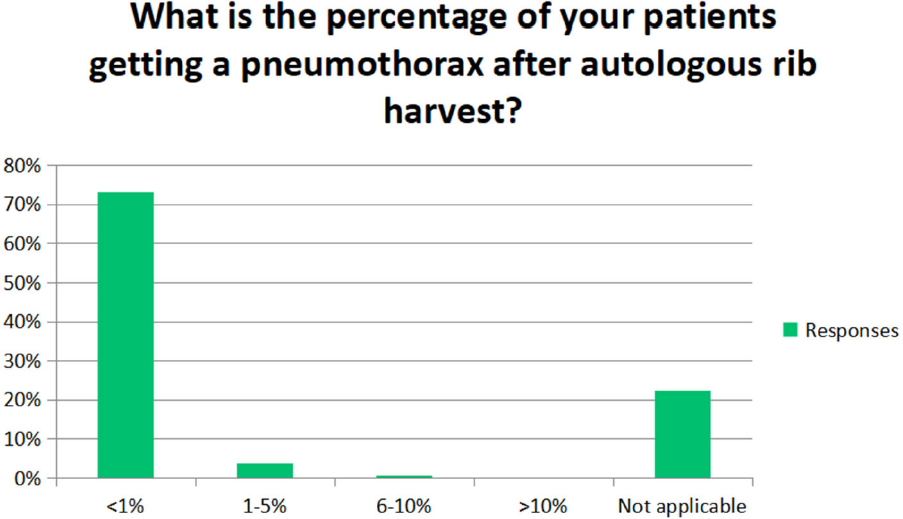 Figure 5. The percentage of patients getting a pneumothorax post-op 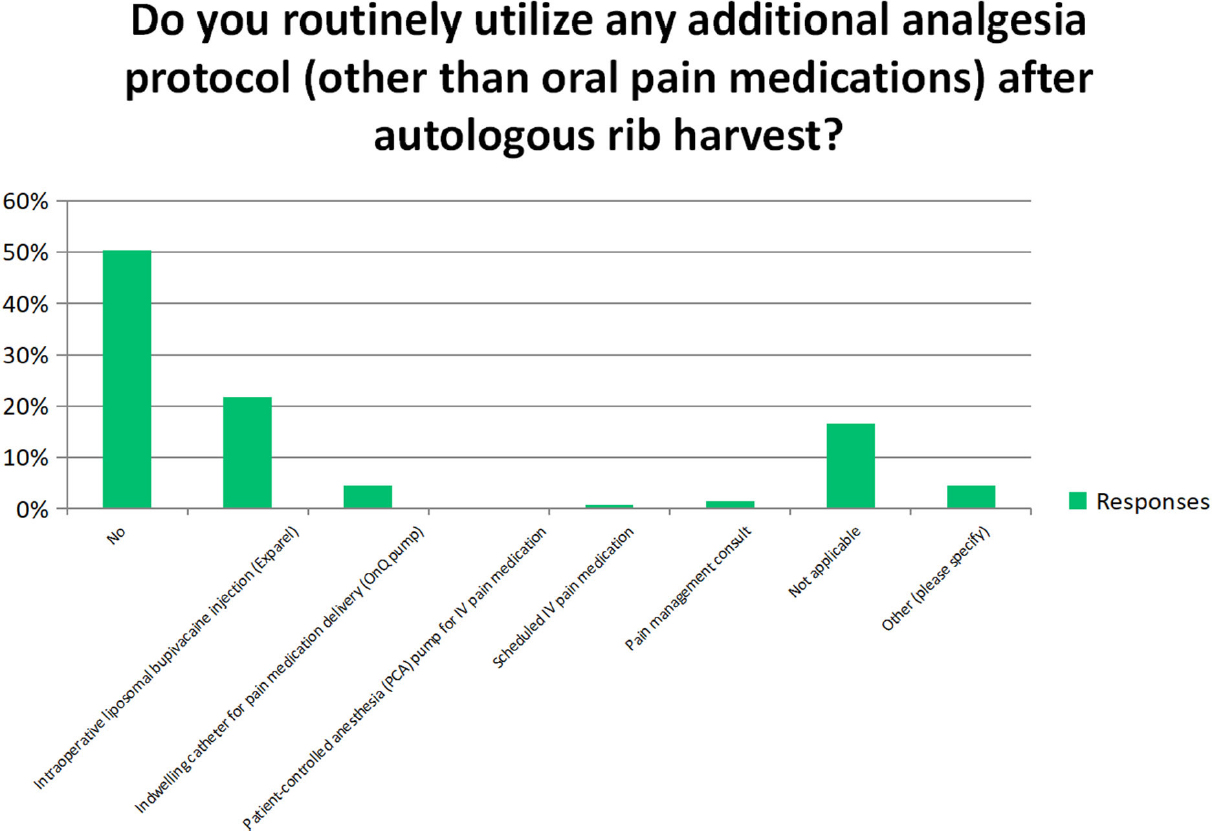 Revision rhinoplasty routinely requires repairing structural deformities resulting from over-zealous resection of the bony-cartilaginous framework from prior procedures. This surgery is often technically challenging, particularly when cartilage material is limited. Autologous costal cartilage has been a workhorse for rhinoplasty surgeons since it provides the most abundant source of cartilage for graft design as well as being the most reliable for structural support[5]. However, the rate of warping was reported at 3.0%, reabsorption at 0.2%, infection at 0.5%, migration at 0.3%, unfavorable chest scar at 3.0%, and pneumothorax at 0% (0.13%-0.32%) according to a recent meta-analysis[6]. Given the convenience of irradiated cadaveric rib graft, the lack of donor-site morbidity and potential scarring, it is a popular alternative. Kridel et al.[7] reported the largest available case series to date in irradiated rib graft for 1,025 rhinoplasties with outcomes after long-term follow-up in some of the patients of greater than 10 years. Overall, the authors described the rate of warping at 3.25%, infection at 0.9%, and reabsorption at 1.2%. Alternatively, alloplastic materials have the advantages of being easy to use and readily available with an unlimited supply. Unfortunately, many of these alloplastic materials are fraught with long-term complications, such as infection, migration, extrusion and palpability. The risk of infection up to 12.6% and extrusion rate of 16.0% had been reported by a recent case series and meta-analysis by Loyo and Ishii[8]. Occasionally, the extrusion happened many years after implantation.

Our study demonstrated that autologous rib grafts were still commonly performed by facial plastic surgeons in the United States (US). However, as with most online survey studies, our study was limited by the small number of responses and user bias. Most surgeons preferred full-thickness rib graft harvest with a medium size (2-4 cm) incision. However, it was not surprising to see a trend towards “short-scar” technique with incision < 2 cm. The majority of the surgeons were not concerned about post-operative pulmonary complications as the incidence remained low. This corresponded to the low percentage of surgeons keeping patients overnight for observation or getting a routine chest X-ray post-operatively. As the opioid epidemic continues in the US, it was interesting to see most of the US facial plastic surgeons did not utilize any additional analgesia for rib grafts other than oral pain medications. Intraoperative liposomal bupivacaine injection at the surgical site that provides an opioid-free regional anesthesia, has gained some popularity as 21.8% of the survey responders incorporated it into their post-operative pain management. Indwelling catheter for pain medication delivery (e.g., bupivacaine) was also an option among the facial plastic surgeons, however, such delivery system would often require hospital monitoring which might negate its routine use.

Twenty eight percent of the responding surgeons reported harvesting rib grafts in an ambulatory or an office-based surgical facility compared to approximately 50% of them performing the procedure at a hospital facility. There was less difference between in-office vs. ambulatory facilities (14.8%) than there was between in-office or ambulatory facility and a hospital (21.5%). This indicated that the decision of location choice was mainly on hospital vs. non-hospital facilities rather than ambulatory vs. office-based surgery centers.

In order to keep the survey simple, specific medical services available at non-hospital facilities were not solicited. These included the availability of X-ray, chest tube set, thoracic surgeons and the proximity to a hospital for transfer and admission. This is a significant limitation of the study. In addition, our online survey was distributed via email by the AAFPRS which might have explained the lower response rate when mass emails were frequently ignored by members.

A suggestion to future study should include a discussion of the intervention performed by the surgeons if an air leak is found or suspected intraoperatively since a formal chest tube is rarely needed. Typically, an intraoperative air leak can be detected by a visual rent in the posterior perichondrium and pleura. Most surgeons also have the anesthesia provider perform a Valsalva maneuver while looking for air bubbles forming under saline irrigation at the rib graft harvest site. If an air leak is detected, the next step will be to first place a small red-rubber catheter through the pleural defect, temporarily secure it with a purse-string suture in multiple layers, then withdraw the catheter under suction. Patients are then observed for shortness of breath and an elective chest X-ray is obtained in the post-anesthesia care unit, at a nearby radiology facility or emergency department. A small pneumothorax may be seen in those situations and treatment often is observation. In rare cases, insertion of a small suction catheter (much smaller than a conventional chest tube) may be required and placed by a thoracic surgeon, which will be left in place for a few days.

In conclusion, we summarized the current practice trend of US facial plastic surgeons in autologous costal cartilage harvest for rhinoplasty. The very low percentage of pneumothorax after rib harvest and the use of post-operative advanced analgesic control techniques remained low and did not warrant routine post-operative chest imaging or overnight observation. Two thirds of the US facial plastic surgeons continued to perform their rib harvest in a hospital setting.

Made substantial contributions to conception and design of the study and performed data analysis and interpretation: Olcott CM, Pearlman SJ

Data can be requested from the corresponding author. 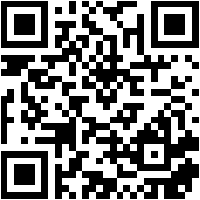