Aim: Second degree superficial burns are painful and heal over a period of two to three weeks time. Multimodality treatment approach is effective in reducing time of healing, pain, rate of complications and overall cost of treatment. Aim of this study is to observe effect of low level laser therapy (LLLT) as an adjunct to conventional therapy for second degree superficial burn.

Methods: This article presents a case series of twenty patients in which LLLT was used as an adjunct therapy for target burn areas.

Results: Average time taken for complete healing of areas with second degree superficial burns was 11.75 (SD 2.86) days. One patient was healed on day 6; ten patients were healed on day 10, six patients on day 13, and three on day 17.

Conclusion: We could not found significant evidence of positive effect of LLLT over rate of wound healing. However its effects are promising and further large multicentric trials are needed to establish its role and standardize its dose parameters.

Approximately 6-7 million new burn incidents are occurring in India every year[1]. Burn patients are a major burden over society and effective and rapid treatment of burn wounds is important part of patient care as well as proper healthcare resource utilization. Majority of burn patients have areas of variable burn thickness and thus require multimodality treatment approach.

The healing of second degree superficial burn takes place by epithelialization from epidermal appendages present in dermis. Conventionally these burn wounds are managed by regular dressings. These wounds take around two to three weeks time for complete healing[2]. It may take longer in case of wound infection, sepsis or hypoproteinemia. Various treatment modalities are proposed, including collagen dressings, autologous platelet reach plasma therapy, insulin therapy and low level laser therapy (LLLT) to increase rate of healing and decrease complications in these cases[3]. Evidence for beneficial effects of these modalities is not sufficient.

Low level laser (LLL) is also known as cold laser as it does not produce heating effect. LLLT affects wound healing on the basis of photobiomodulation effect. LLLT is claimed to have analgesic, anti-inflammatory effects and stimulates wound healing and remodelling[4]. An animal study has demonstrated effects of LLL over second degree burn wounds at cellular level[5]. However there is no human study for its effects on acute burn wounds. LLLT can be used as an adjunct to the conventional treatment of second degree superficial burn. This article presents our experience of the same.

Twenty acute burn patients admitted into our tertiary burn care center from January 2017 to May 2018 were included in the study. The study is purely descriptive in nature. Both retrospective and prospective data were collected. The patients included in the study were in the age range 18 to 45 years, having less than 40% of total body surface area burnt. The extent and depth of the burn were assessed clinically using Lund and Browder chart and condition of wound respectively. All patients were having variable thickness burns with areas of first degree, second degree superficial and second degree deep burns. For deep dermal burns tangential excision and grafting was performed, while areas with first degree and second degree superficial burns were managed with collagen dressings twice weekly. LLLT was used as an adjunct therapy in all patients. Patients with diabetes mellitus, collagen vascular diseases or any other disease which limits wound healing and patients on medications containing steroids were excluded. Written informed consent was taken from all the patients.

Areas of second degree superficial burns were considered as target area. All wounds were provided LLLT (along with the conventional treatment) in the operation theatre twice weekly with minimum interval of 3 days [Figure 1]. We used Gallium Arsenide (GaAs) diode red laser of wavelength 650 nm, frequency 10 kHz and output power 100 mW. It was a continuous beam laser with an energy density of 4 J/cm2. Machine delivers laser in scanning mode (non contact delivery) with 60 cm distance between laser source and wound. Each wound was given laser therapy for duration of 125 second every time[6]. Therapy was repeated until the wound epithelialized completely. 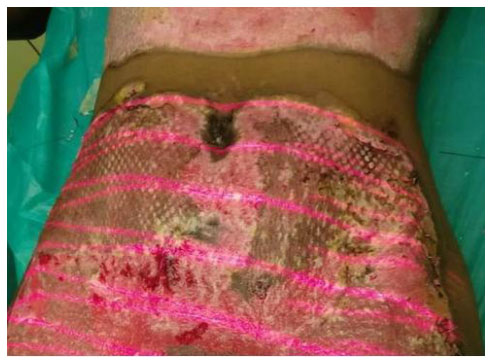 Wound area measured with the help of digital planimetry and wound swab was taken for microbiology culture at each therapy session. Wound was considered infected if the swab culture has shown growth of any pathologic organism. Healing time was calculated as the period between day 0 and the day when wound area was 0 cm2[Figure 2]. Findings were recorded and assessment done when wound healed completely [Figures 3 and 4]. Clinical history and examination were done at the time of each dressing to look for any adverse effect related to laser therapy. Any pigment changes, itching, erythema or burning of normal skin were considered as adverse effects related to laser therapy. 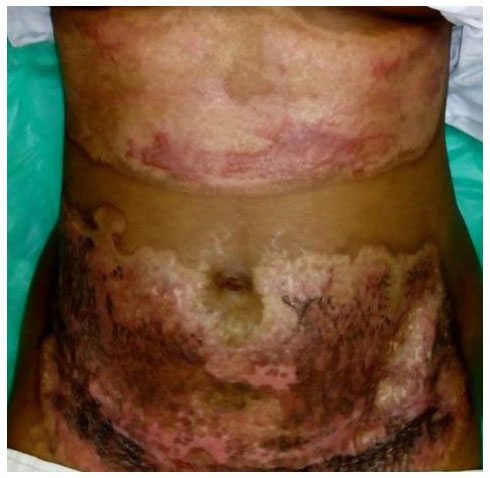 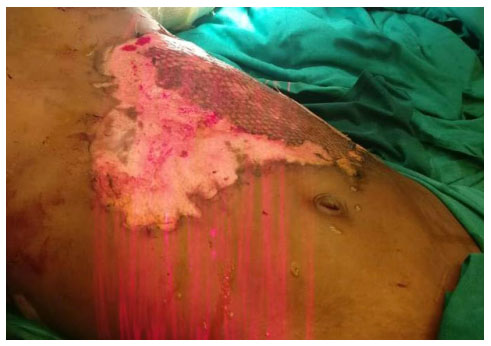 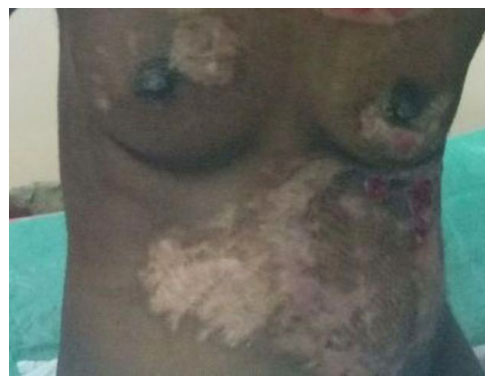 A total of twenty patients are included in the study with the mean age 30.55 years (19-42 years). Eight male and twelve female patients are included. The average time taken for complete healing of areas with second degree superficial burns was 11.75 (SD 2.86) days. Observations are presented in Table 1. Mean area treated was 2146 (SD 804) cm2 which corresponds to 13.5 (SD 5.2) BSA% second degree superficial burns. The patient with the smallest target area was healed on day 6; ten patients were healed on day 10, six patients on day 13, and three on day 17. Mean sessions of LLLT given for one patient were 3.55 (SD 0.83).

Posten et al.[7] introduced LLLT to improve wound healing. Standard parameters for LLLT are not defined and various studies used different parameters. The range of parameters used is power output 1-100 mW and wavelength 300-10,600 nm (red and infrared light). It can be continuous or pulsed. It is given in dose of 0.01-100 J/cm2. The duration of therapy varies between 10 to 3000 s[7]. The commonly used lasers for LLLT are helium-neon (HeNe), GaAs, indium gallium aluminum phosphorous (InGaAlP), and gallium aluminum arsenide (GaAlAs)[7].

The cytochromes in the mitochondria absorb the laser radiation and convert it into ATP’s which is used for stimulation of cell proliferation and synthesis of proteins resulting in photobiological activation of the cell[8]. Target cells of LLL are myofibroblasts. In animal studies LLLT has been shown to increase myofibroblast proliferation thus the rate of collagen production and wound contraction are increased. However evidence for its beneficial effects in human wounds is lacking. By decreasing the healing time of open wounds, LLLT may reduce the risk of infection and other complications. LLLT also has positive effect over post burn hypertrophic scars[6].

LLLT has a photobiomodulation effect over tissue; it has photochemical and photomechanical components and no photothermal effect[8]. A variety of mechanisms of action are proposed:

(1) photonic energy is converted to chemical energy within the cell and ATP generated;

(2) enzymes in the mitochondria may be activated or deactivated;

(5) a cascade of metabolic effects result in various physiological changes, which result in improved tissue repair, faster resolution of the inflammatory response, and reduction in pain[4,8].

The role of LLLT for promoting wound healing has long been studied, still there is insufficient literature to design a standard treatment protocol[9-11]. Using LLL as an adjunct to conventional treatment of second degree superficial burns is expected to decrease the time of healing, rate of infection, pain and overall cost of treatment. In our experience we have found acceptable healing of wounds in target areas in all twenty patients. But the observations are not sufficient to conclude that wound healing rates were higher compared to conventional treatment alone. Wound swab culture came positive in five wounds. No effect over infection could be concluded with the observations.

In the diabetic foot LLLT has been shown to have effect on all stages of wound healing by increasing fibroblasts and keratinocyte proliferation, collagen synthesis, neoangiogenesis, improve microcirculation, stimulate granulation tissue formation, cell growth and wound contraction, anti-edema and anti-inflammatory action[12].

Van Breugel and Bar[13] has found that the laser can either stimulate or inhibit human fibroblasts in vitro, depending on exposure time and power density used. Therefore the configuration of LLL used for treatment is important. We have observed effects of LLLT with 100 mW power output and 125 second exposure time, delivering energy density of 4 J/cm2. Twice weekly therapy regime was followed. This is as per the settings used by Gaida et al.[6].

Effect of LLLT also depends on the physiological state of the tissue at the time of therapy. This explains the variability of the results reported in the literature. Karu[14] stated that light stimulates cell proliferation if the cells are growing poorly at the time of irradiation. Thus, if a cell is fully functional, there is nothing for laser irradiation to stimulate, and therefore no therapeutic benefit will be observed[14].

LLLT is a safe and cost effective treatment modality[15]. We have not found any laser related adverse effect in any patient. Hawkins et al.[8] state that in the clinical situation, LLLT is an accepted, efficient, noninvasive, and painless method of treating edema, inflammation, and pain.

Statistical analysis could not be performed because of less number of cases. No objective evidence of pain relief was recorded. Collagen dressing used along with LLLT is identified as a confounding factor. This study was a pilot study and despite its shortcomings it has promising results and provides a basis for larger studies.

In conclusion, LLLT can be used as an adjunct to the conventional treatment of second degree superficial burn. We could not find significant evidence of its positive effect over rate of wound healing. However its effects are promising and further large multicentric trials are needed to establish its role and standardize its dose parameters.

Due consent was taken from the patients to participate in the study and separately for the photography. Ethical approval was done according to the hospital and department policy. 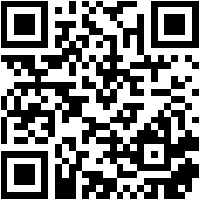