Aim: Maxillofacial surgery has always aimed to find alternative therapies to treat severe maxillary hypoplasia. Distraction osteogenesis of the midface has become the technique with the best functional and aesthetic results. Nevertheless, anchoring a distractor to the middle third of the face continues to involve complex planning. Plus, achieving the desired force vector can sometimes be cumbersome and uncomfortable. The aim of this study is to propose a novel skeletal anchorage technique for the rigid external distractor.

Methods: Non-controlled, prospective study of 9 patients with severe midface hypoplasia who were treated with distraction osteogenesis using a rigid external distractor anchored to the infraorbital rims and the bilateral pyriform apertures. The activation phase started the first postoperative day at a rate of 1 mm per day. The consolidation period lasted 6 to 8 weeks.

Results: Eight patients achieved the desired distraction objective (24.5 mm on average), with only 1 suffering a 5-mm relapse. None of the patients reported complications.

Conclusion: Distraction osteogenesis of the midface by skeletal anchorage is an alternative method when treating patients with severe maxillary hypoplasia. It has significant advantages compared to traditional anchoring because it simplifies the procedure, diminishes the costs and complications.

Solving cases of severe maxillary hypoplasia has always been a challenge for oral and maxillofacial surgeons.[1,2] Molina and Ortiz-Monasterio[3] proposed a gradual advancement of the maxilla using a facemask for elastic orthodontic traction or distraction. However, an adequate maxillary advancement in cases of severe hypoplasia was not achieved. Besides, the forces applied could not be controlled and ulcers in the chin and forehead were created.[4] Polley and Figueroa[1,5] also used elastic distraction with facemask and had similar findings, reporting insufficient maxillary advancement (4 to 6 mm on average) with under-corrected residual inverted anterior bite.

In 1997, some authors proposed the use of the rigid external distraction device I (RED I)[4-6] in order to overcome these shortcomings. The device was anchored to the skull and the denture in order to distract facial bones.[7] The use of the RED I became an excellent treatment strategy, because it allowed precise and controlled distraction osteogenesis of the maxilla.[8,9] Additionally, results were stable and predictable.[10] Later, the RED II was introduced to improve the vector control by means of an additional anchorage to the zygomatic bone plate. All of these attributes make the use of RED I and II an excellent treatment alternative for patients with severe maxillary hypoplasia.

RED I and II use a custom-made intraoral orthodontic splint[1] anchored to the first permanent molars or second temporary molars to generate the maxilla pulling force. The splint is made using cast models and 0.050 or 0.045 mm stainless steel wires. A wire emerges from the splint up to the height of the nostril floor, which generally coincides with the maxilla’s centre of rotation.

Despite the many advantages offered by the RED I and II, both devices have some disadvantages. The need for teeth to anchor the device is one of them.[11] Dental anchoring results in patient discomfort and interferes with the normal functions of the oral cavity, i.e. eating, speaking and performing proper oral hygiene.[12] On the other hand, teeth act as an intermediary between the RED and the bone to be distracted, impeding direct force to be applied to the bone.[11]

The aim of this article is to propose an alternative to the dental anchorage used when distracting with RED I and II. We suggest the use of a skeletal anchorage with a gauge of 0.4 or 0.5 mm of stainless steel wire, that we called skeletal anchorage for the rigid external device (SARED).

The study was a non-controlled, prospective study involving 9 patients, 3 female and 6 male (9 to 24 years old; mean age 17.5 ± 5.4 years), selected from the Department of Oral and Maxillofacial Surgery at Hospital del Salvador between April 2007 and January 2015. Inclusion criteria were patients diagnosed with severe midface hypoplasia aged 5 years or older (to allow proper post distraction oclusal stability and an adequate teeth interdigitation shown in the hand-articulated models).

All patients were operated on by one surgeon.

All surgeries were performed in an operating room, under general anaesthesia, using orotracheal intubation. Through a maxillary vestibular approach, a Le Fort I (n = 3) or III (n = 6) osteotomy was performed using a reciprocating or piezoelectric saw. In patients who underwent a Le Fort III osteotomy a transconjuctival approach was also utilised. A nasal septum osteotomy and pterygomaxillary disjunction were performed subsequently.

A cylindrical burr was used to perforate below the pyriform apertures. A 0.40-mm stainless steel wire was passed through the apertures to the floor of the nasal cavity. A 14-G cannula was used to move the wire percutaneously towards the skin along the nasolabial fold.

Patients who underwent a Le Fort III osteotomy also underwent upper skeletal anchorage. An aperture was opened with a cylindrical burr alongside the mid lateral area of the infraorbital rims over the anterior wall of the maxilla. Through this aperture a 0.40-mm stainless steel wire was passed through and returned through the osteotomy on the orbit’s floors. A 14-G cannula was used as a guide to move the wires towards the skin, allowing a percutaneous exit [Figure 1]. 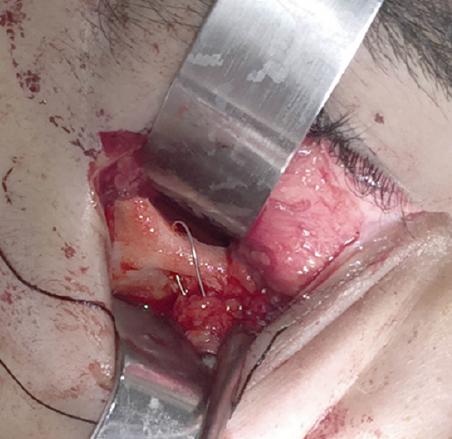 A halo frame was fixed to the skull using three percutaneous screws on each side, secured to the scalp. The screws were parallel to Frankfort’s horizontal plane.

The distraction vector was calculated according to the patients’ needs. The latency period was one day. Active distraction started on the first postoperative day at a rate of 1.0 mm per day divided in 0.5 mm in the morning and 0.5 mm in the evening. In every case desired advancement was achieved without overcorrection. The distraction device was removed after a consolidation period of 6 to 8 weeks, followed by intermaxillary elastics to improve the occlusal relationship.

The RED was removed in an outpatient care room without the need for local anaesthetic. The skeletal anchor wires were cut and removed The halo frame’s pins were unscrewed and removed.

On average, a 24.0 ± 3.6 mm (range 20-30 mm) midface distraction was obtained. The overjet before surgery was on average -15.8 ± 4.2 mm, and a year after distraction was 1.6 ± 2.5 mm [Table 1]. None of the patients reported complications during the course of the treatment. There were incidents of the wires breaking, skin infection or bone fractures associated with the skeletal anchors.

Patient distribution according to age, gender, diagnosis, type of osteotomy, amount of distraction, relapse, and follow-up

The distraction objective was achieved in all but one patient, who suffered a relapse of 5 mm. The deformity was secondary to a cleft lip and palate, and the patient did not have ideal dental overjet or overbite in hand-articulated models before the treatment. The patient subsequently underwent a conventional Le Fort I osteotomy to achieve ideal results.

Patient follow-up lasted 35.7 months on average, ranging between 15 and 60 months. It is vital to highlight that follow-up continues [Figures 2-4]. 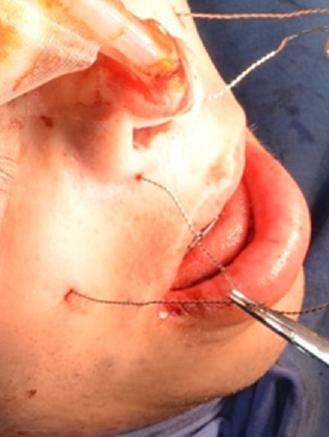 Figure 2. Wires emerging percutaneously. They are fixed to the infraorbital rim and the piriform aperture 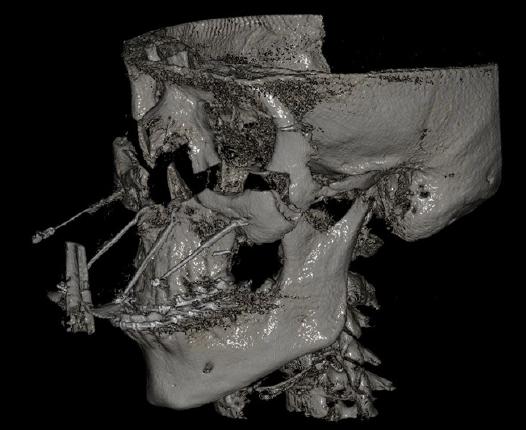 Distraction osteogenesis was introduced in the craniofacial field in 1992 by McCarthy et al.[13] to correct mandibular hypoplasia.[14] The procedure has since been widely used in the field of craniofacial surgery, and is considered today as an alternative method to treating craniofacial dysplasia.[5,15] Intra and extraoral distraction devices can be used. Extraoral devices are easier to handle, allow for more force to be applied and for greater advancement to be achieved. They also allow modification and better control of the distraction vector.[6,15,16] When an extraoral device is used, further surgery is not needed to remove the distractor.[6,17]

This study aimed to overcome some of these limitations by modifying the method by which facial bones are anchored to an extraoral distraction device, specifically RED II. Several authors[1,5,10,11] describe one of the limitations being the need for teeth to be used as anchorage. Regardless of the dentition phase, they need to be in good and healthy condition. In the proposed technique, the pyriform apertures and infraorbital rims are used as anchorage points and teeth are only necessary to stabilize the distracted segments once they have achieved the desired occlusion.

Nevertheless, as Nishimoto et al.[18] emphasised, the presence of teeth is ideal because it diminishes the chance of relapse, since occlusion holds skeletal bases in position. Furthermore, they state that when teeth are missing, consolidation time should be longer.

In the publication by Nout et al.[10] an alternative is mentioned for distraction with RED without dental anchoring in a patient diagnosed with Pfeiffer’s syndrome. They suggested using bilateral anchorage to the pyriform aperture only, fixed with screws. SARED does not require the use of osteosynthesis (plates nor screws) nor a custom-made intraoral orthodontic splint, reducing the cost of treatment and diminishing the risk of damage of dental follicles and roots.

Since teeth anchoring is unnecessary in SARED, the force can be applied directly to the bone. This in turn means that the line of action of the force vector is direct as there is no intermediary device to reduce the force. As Figueroa and Polley[5] discuss, the wire splint of RED I, which has an extraoral wire and traction hooks, has some flexibility, which allows the distraction wire force to accumulate and then be liberated gradually. In other words, once the screw is activated, the distraction effect is not immediate, but as the wire recovers its shape it becomes a continuous tension.[3,11,19] We believe the mechanism described by the authors[5] is not ideal because the wire undergoes elastic deformity that prevents the applied force from being transferred in its entirety to the bone being distracted.[11,12]

SARED is more comfortable than the intraoral splint anchorage, because it does not interfere with the functions of the oral cavity. It allows uninterrupted eating because there is no device, wires or splints inside the mouth. Patients can, therefore, brush their teeth even when they have braces. In addition, patients with SARED can continue their orthodontic treatment during the whole distraction and consolidation period.

The percutaneous exits of the wires from the nasolabial folds do not compromise aesthetics because the scars are hidden in face wrinkles. Other authors have previously suggested the use of percutaneous wires emerging from the zygomatic bone to distract with RED II and have reported no major complications.[18]

Finally, SARED does not require further surgery to be removed, as do osteosynthesis anchored devices.[11] The halo and wires can be pulled out without local anaesthetic on an outpatient basis. The use of SARED simplifies a process that is highly complex itself and delivers better conditions for the patient and surgeon.

Using SARED is a convenient method to distract the midface. Advantages include better control of the distraction vector and force when compared to the use of a dental anchorage (RED I) or a dental anchorage with an osteosynthesis plate anchorage (RED II). SARED improves patient comfort levels, oral hygiene and overall oral health. The method proposed is simple, reduces costs and complications.

The authors have no commercial or financial associations that might create a conflict of interest with the information presented in this manuscript.

All patients signed an informed consent letter before participating in the study.

This study was approved by ethical board of Hospital del Salvador. 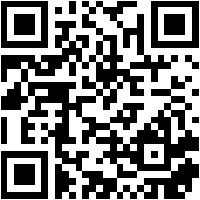