Aim: The aim was to study the effectiveness of the reverse latissimus dorsi muscle flap in reconstruction of complex defects of the back.

Methods: This is a retrospective study of patients who underwent reverse latissimus dorsi flap for reconstruction of the back, in a tertiary care hospital. The patient demographics, etiology, surgery indications and complications were studied.

Conclusion: The vascularity of the flap is reliable can be used to obliterate the dead space, can be used to control the infection, in complex cases of the back.

The back has the vertebrae in the middle and exposure of the bone gives us a complex defect. The etiology includes myelomeningocele defects, post excision defects of the back, and pressure sores. The various options for coverage of myelomeningocele defects include local skin flaps, skin graft, latissimus dorsi muscle flap and othervariations.[1] The latissimus dorsi flap is a versatile flap based on the thoracodorsal vessels and the perforators from the posterior intercostal and lumbar perforators. It is a type V muscle flap based on the Mathes and Nahai classification.[2] The latissimus dorsi muscle is frequently used based on the thoracodorsal pedicle. The reverse latissimus dorsi flap is based on the secondary pedicles which are the perforators from the posterior intercostal and lumbar vessels.[2] The reverse latissimus dorsi flap is used for coverage of the midline and contralateral back, lumbar and sacral midline. This muscle flap can also be used for the reconstruction of the diaphragm.[3] Simple midline defects can be covered by various fasciocutaneous flaps like rhomboid, transposition, rotation, advancement, Z flaps, S flaps, lumbar perforator based flaps, etc.[2] Complex defects in the lower back over the lumbar and sacral region are a difficult problem for plastic surgeons. In complicated cases, we cannot rely on these fasciocutaneous flaps alone, we need to combine muscle flaps with either fasciocutaneous flaps or skin grafts. Muscle flaps have many advantages: they are sturdy, more vascular, have alarge surface area that can be used to obliterate dead space. For coverage of complex posterior defects, we can use gluteus maxims, latissimus dorsi muscle flaps alone or with other variations.

The gluteus maximus muscle can be used to cover sacral defects. However, lumbar defects are not as easy covered. The ipsilateral latissimus dorsi flap based on the thoracodorsal vessels can be moved medially to cover the lumbar region. The turnover of the latissimus dorsi flap from lateral to medial side can be used to cover the midline thoracic defects. These flaps are based on the thoracodorsal vessels. Latissimus dorsi musculocutaneous flaps with the skin extending to the posterior axillary line would cover the lower lumbar and sacral defects.

A retrospective study was conducted in a tertiary care hospital of patients who underwent reverse latissimus dorsi flaps between February 2012 and December 2016.

There are 5 cases in this study. The patient records were analyzed for the age, gender, indications, surgical procedure, defect size, complications. The neurosurgeons released the tethered spinal cords in case of myelomeningocele in first 3 cases, excised the recurrent sacral cordoma in the fourth case, while the onco surgeons excised the sarcoma of the chest wall in the fourth case. After the primary surgeries as mentioned above, the cases were presented for reconstruction. The dura was reinforced with sutures and fibrin in cases with myelomeningocele. An oblique incision from the edge of the defect to the ipsilateral axilla was used to expose the latissimus dorsi muscle. The skin flaps were raised. The muscle was cut at 10 cm from the insertion. The thoracodorsal vessels and nerve were identified, ligated and divided. The muscle was raised from the undersurface until the secondary pedicles were identified [Figure 1]. The muscle was turned over to the defect in such a way that superficial surface of the muscle covered the defect. After turnover, the flap was inset with absorbable sutures. Flap vascularity was confirmed by color and distal tip bleeding [Figure 2]. Over this muscle flap, adjacent fasciocutaneous flaps were advanced. The donor site was closed in layers and a drain was placed. Post operatively patients were nursed in either prone or lateral position. Sutures were removed by 15 days and the drain by 10 days. 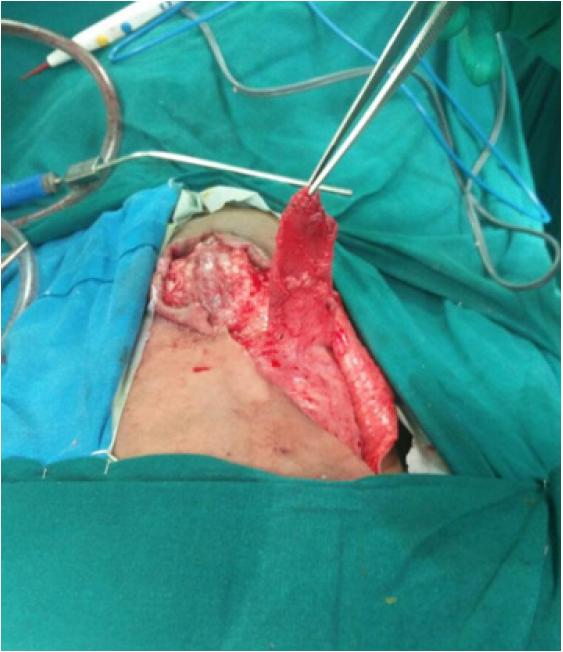 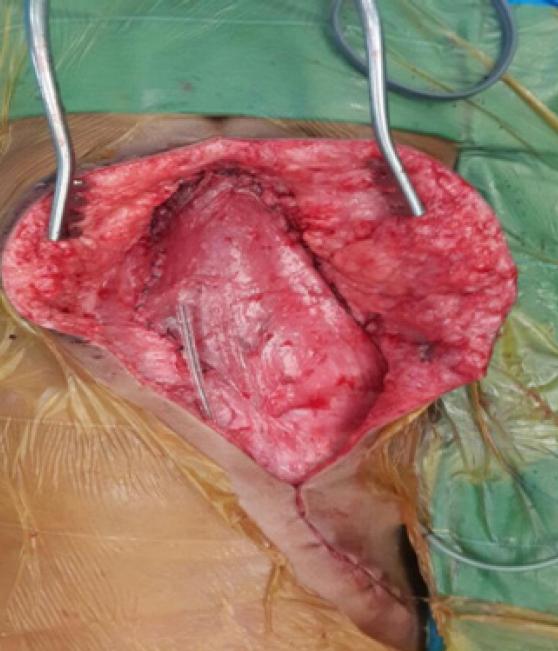 This patient had a myelomeningocele with raised intracranial pressure and a ventriculoperitoneal shunt. We had high suspicion that there might be a cerebrospinal fluid leak (CSF leak) [Figure 3]. Hence, a muscle flap was planned to cover the defect including any minor leaks and to provide a vascular cover over the dura. A reverse latissimus dorsi muscle flap was used to cover the defect and a fasciocutaneous flap was advanced over the muscle [Figure 2]. The postoperative course was complicated by 1 cm skin necrosis, which was dressed regularly and allowed to heal by secondary intention. 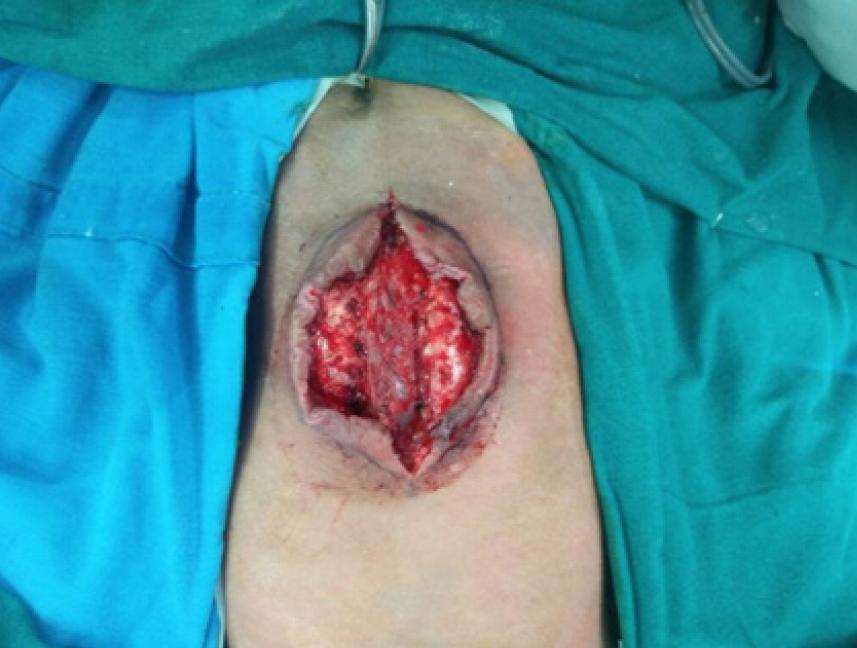 This patient was operated for amyelomeningocele of the lumbosacral region. The tethered cords were released and dura was repaired by the neurosurgeons. The skin adjacent to the defect was advanced to close the defect. She developed CSF leak manifesting as swelling in the operated site and also excess drainage collection. She was reexplored to correct the CSF leak. The dura was reinforced with sutures and glue. The reverse latissimus dorsi turnover flaps were used to cover this complicated myelomeningocele defect. Here, the distal end of the latissimus dorsi flap was not showing adequate vascularity and was debrided. This flap was able to cover only the upper two thirds of the defect. A contralateral gluteus maximus muscle flap was advanced to the lower part of the defect [Figure 4]. The skin was advanced to cover the defect. The wound healed well with no complications. 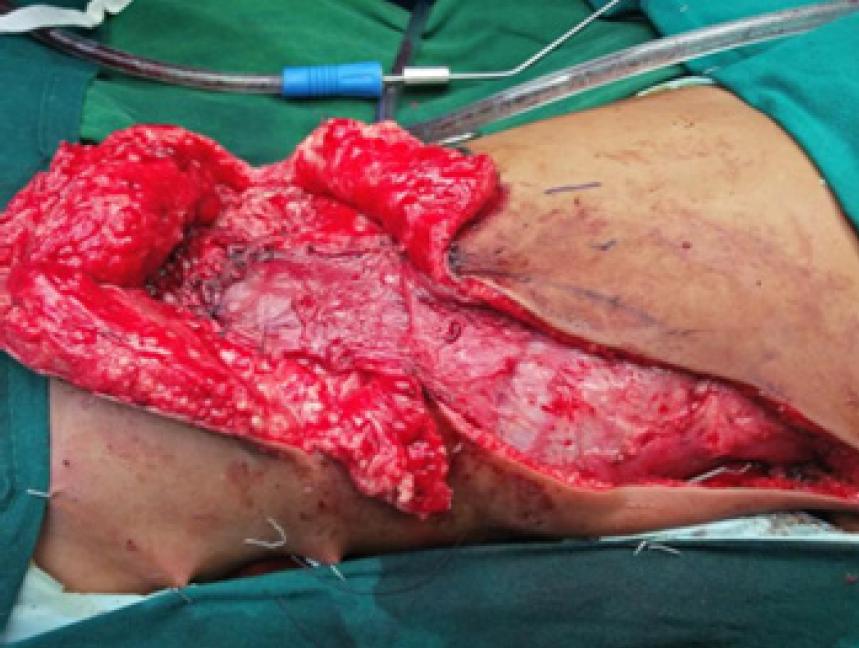 All the cases included in the study

The indications for the use of a muscle flap in these cases were CSF leak, sinus, wound dehiscence, need for vascular cover over the implants, obliteration of the dead space, and to reconstruct the chest wall defect.

In case 3, the distal muscle did not look healthy; hence the contralateral gluteus maximus flap was raised and advanced to cover the lower defect. At the end of surgery, both muscles were healthy. We identified three big lower perforators, but even then the vascularity of the muscle tip was inadequate.

In case 5 the flap dehisced, there were increased secretions from the wound, empyema due to incomplete excision of the tumor and patient was unwilling to undergo further procedures. The flap in case 5 looked healthy and the skin graft take was more than 90%.

Otherwise, the other 4 cases had no postoperative fevers, increase in discharge or particulate matter in the drain, which suggested a healthy muscle flap.

There were no donor site complications in any of the above cases. All these patients, except for case 5, followed up for six months and had no problems recorded with regards to shoulder movement.

There is thinning of the skin over the myelomeningocele. There is decreased soft tissue support in the midline if the skin over the defect is thinned by expansion. The use of a muscle cover in addition to the fasciocutaneous flap, over the repaired dura will give additional support as well as act as a vascularized cover over the dura. The layered closure had helped Söyüncü et al.[9] to decrease the CSF leakage by using omentum and latissimus dorsi flap.

A reverse latissimus dorsi flap can also be used for 3D coverage and to control bacterial contamination.[5,6,10] In our experience, complicated acquired defects (like in the fourth case) require muscle to fill the dead space around the fixators as a first layer to cover the implants. Dead space is a potential space for seroma collection and infection. So, with amuscle flap we were able to successfully prevent the formation of seroma and infection.

Large meningomyelocele defects have also been reconstructed with reverse latissimus dorsi flap and skin graft.[7] In one case we decided to leave the wound to heal by secondary intention as the skin necrosis defect was 1 cm in size. We had a healthy muscle covering the dura and hence, we were able to allow for secondary intention without the risk of dura break down and infection.

Latissimus dorsi muscle is a type V muscle flap based on thoracodorsal artery and perforators from the lumbar and posterior intercostal vessels. These perforators are usually present 5 cm from the midline.[11] The perforators were present within 5 cm of the midline in our series. All the flaps except 1 survived without any distal necrosis, even though the distal perforators were intact. The distal 2 perforators are enough for the survival of the muscle for the lower part of the muscle.[12] Hayashida et al.[13] have published a case report on reverse latissimus dorsi flap based on the 10th perforator. In the above case the reach of the flap was up to the anterior superior iliac spine. In our cases the flaps reached the lower sacrum without tension or compromise on the muscle vascularity in all cases except 1 case. Though, many authors have described that the flap can survive with the lower 9th and 10th perforators[13] we feel distal flap necrosis may be encountered. We do not have a large series as proof, hence further studies would be needed.

The flap reaches down to the lower sacrum, however, one might have difficulty covering the lower part of the sacrum. As an option, the gluteus maximus muscle flap can also be used as described in one of our cases. The most frequent complication of the latissimus dorsi muscle flap is seroma.[14] However, in our serieswe did not encounter it.

The reverse latissimus dorsi flap is robust with a reliable vascularity. The chances of failure are small. Alternatives include the use of local flaps, which do not have the mopping qualities of the muscle. We can deepithelialise the skin flaps and use it to obliterate the dead space. This may lead to the development of epithelial cysts. Söyüncü et al.[9] have used latissimus dorsi muscle flap along with omentum with a view that layered closure would decrease chances of CSF leak in recurrent cases of CSF leak.

We have followed up the patients for 6 months; the functional deficit of the shoulder could not be assessed in children. However there was no appreciable difference in movement of the shoulder when compared to the opposite shoulder. In case 4, we did not find any restriction when compared to the opposite shoulder. Case 5 was lost in follow up. Other studies regarding functional assessment have also found no significant shoulder function disability.[18,19]

Our study had 5 cases; it is not a comparative study. Further studies may be required to compare other flaps with the reverse latissimus dorsi flap to establish that it is a better choice in complex defects of the back. However, most of the authors in the literature have agreed that reverse latissimus dorsi flap is a choice for reconstruction of the back with CSF leaks, difficult wounds with infection, radiation, etc.

In conclusion, we feel that reverse latissimus dorsi muscle flap is a robust flap with reach up to the lower part of sacrum. We recommend it as a definite choice for big complicated meningomyelocele defect or any posterior defect in the lumbar and sacral region. We feel that this flap may be considered as a primary choice for big myelomeningocele defect. This needs further studies. 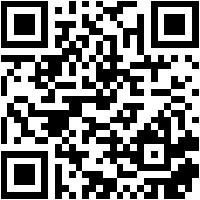