Aim: This study aims to characterize the effects of elastic facelifts using the elasticum suspension technique on the cervical angle and anthropometric distances.

Methods: Forty-six patients underwent surgery. Two 4-5 mm incisions a few centimetres apart were made at sideburn. Through blunt dissection, the deep temporal fascia was approached. An elastic thread (Elasticum®) was anchored to this fascia. A 1.0 cm incision was made just in front of the earlobe. The elastic thread was anchored to the tympanoparotid fascia. Jano needle was passed under the skin surface, as determined by the depth mark of the needle along the cervicomandibular angle, and the elastic threads were looped around the contralateral tympanoparotid fascia. Standard lateral photographs were taken and evaluated.

Most patients who desire to undergo facial rejuvenation want their skin in the mandible and zygomatic regions to be pulled cranially without a visible scar from the facelift.[1] In order to fulfil these goals, the S-lift followed by minimal access cranial suspension (MACS) lift has been developed and put into practice.[1-3] The MACS lift requires a smaller incision, less dissection, and less operating time than classical facelift operations. Although it has the advantage of a shorter recovery time, it nonetheless requires at least 2 or 3 weeks before patients can return to social activities. Recently, the elastic facelift technique has been introduced. Using a straight needle and elastic thread fixed at the midpoint of the needle, lower face lifts and neck lifts have been performed.[4,5] The aim of this study is to characterize the effects of the elastic facelift procedure using elasticum suspension on the cervical angle and anthropometric distances.

Preoperatively, a marking pen was used to indicate the points where the elastic thread was to be passed and turned toward the entry site of the thread; these points were located about 3.0 cm and 1.5 cm from the preauricular fold, on and superior to a line running from below the earlobe to the lower part of the alar nasi. For the neck lift, 2 lines were marked from the earlobe junction. The 1st line was to a point near the angle of the mandible, and the 2nd line inferior to the 1st for making a loop [Figure 1]. 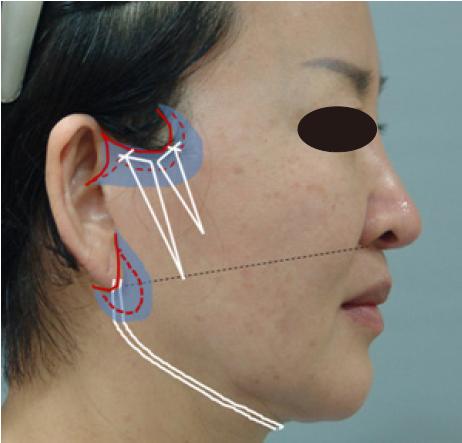 Figure 1. Preoperative design. Red solid lines: skin incision; red dotted lines: extent of skin excision; blue area: extent of dissection; white lines: passages and knots of Elasticum®. Note the lowermost point of elasticum suspension should be superior to the line from below the earlobe to the lower part of the alar nasi to avoid the parotid duct injury

In order to perform an elastic facelift without skin excision, two 4-5 mm incisions a few centimetres apart were made in the sideburn area. Through blunt dissection, the deep temporal fascia was approached. An elastic thread (Elasticum® EP3,5 USP 0 Jano needle® 115 mm, Korpo SRL, Genova, Italy) was anchored to this fascia. In order to perform an elastic neck lift without skin excision, a 1.0 cm incision was made just in front of the earlobe. The elastic thread was anchored to the tympanoparotid fascia (Lore’s fascia).[6]

The Jano needle was passed 5 mm under the skin surface, as determined by the depth mark of the needle along the cervicomandibular angle, and the elastic threads were looped around the contralateral Lore’s fascia, but were not tied. The same needle was passed along a 1.0 cm parallel line below the cervicomandibular angle. Returning to the initial Lore fascia, the elastic thread was tied under maximum tension. During passage of the Jano needle, slight up-and-down movements of the needle tip allowed the operator to ensure that the pathway of the needle was not too superficial.

In both elastic facelifts and elastic neck lifts, the excess skin could be excised in order to prevent tissue from getting jammed. Just after anchoring, patients were checked for skin dimples, and when present, filler or fat injections were performed [Figure 2]. 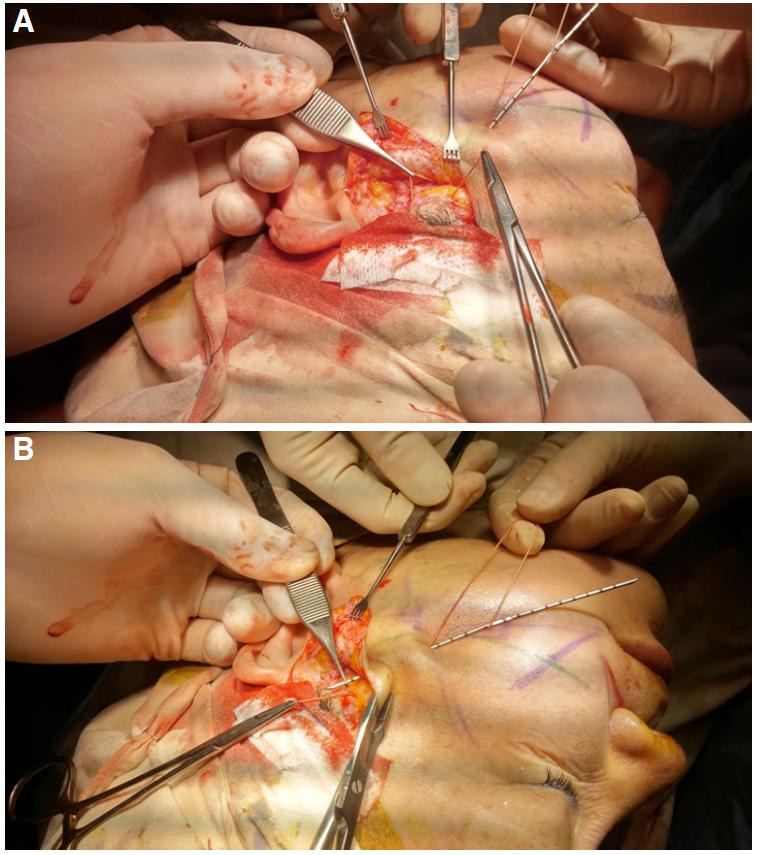 Figure 2. Operative technique. (A) After anchoring to the deep temporal fascia, two-tipped atraumatic needle (Jano needle) travels through the deep subcutaneous tissue. The needle must not be extracted completely. Once it has been pulled halfway out, the thread is pulled through. Depth marks on the shaft of the needle indicate how much of the tip remains in the tissue (about 1 cm or 1/2 cm from the surface of the skin). (B) The posterior tip of needle now become anterior and travels back toward the temporal region through the deep subcutaneous tissue until it reaches the point where the thread enters the deep temporal fascia. The elastic thread is then knotted under traction

Lateral photographs were taken in the standard manner preoperatively, 2 weeks and 6 months postoperatively. 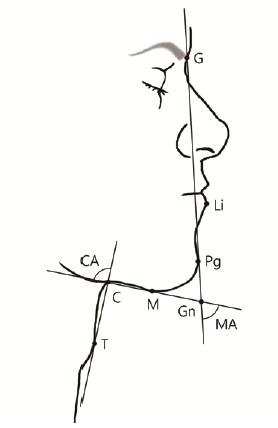 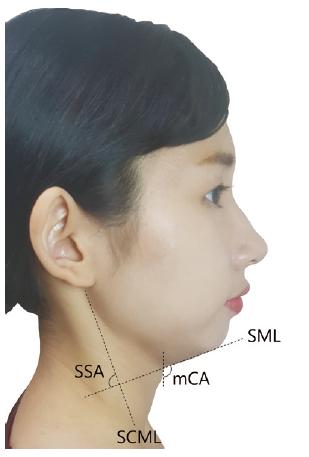 Operated patients according to the skin excision

Two complications were observed. In one patient, paralysis of the frontal branch of the facial nerve was noticed. The thread was removed on postoperative day (POD) 2, and the palsy exhibited recovery on POD 7. In the other case, a sialocele occurred due to Stenson’s duct folding caused by making the knot under too much tension. The thread was loosened on POD 3, and the swelling had subsided on POD 7. 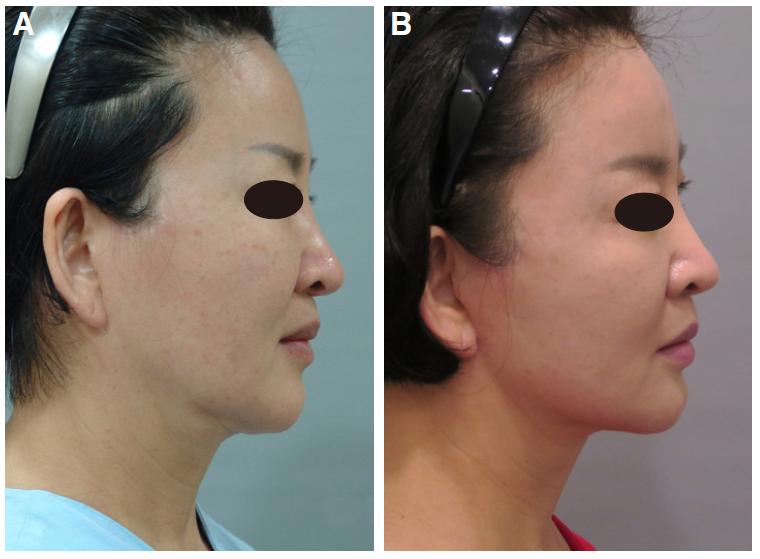 Figure 5. Preoperative (A) and postoperative 3 years (B) photographs of a 64-year-old woman who had elastic face lift and neck lift with skin excision 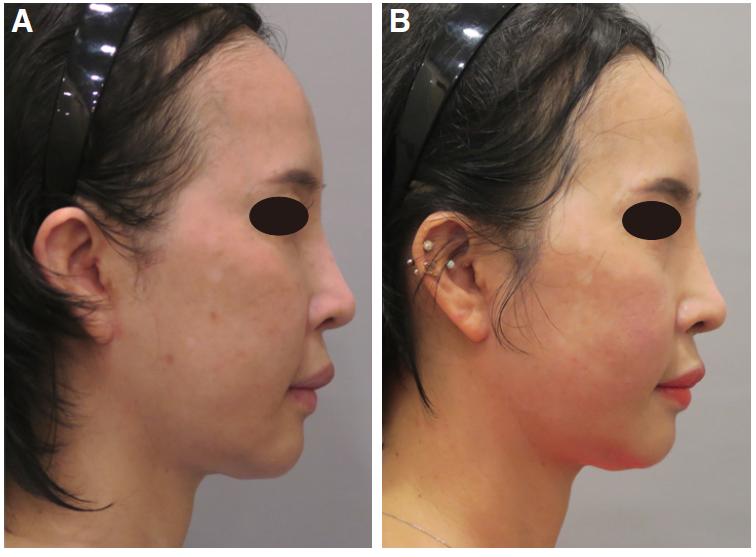 Figure 6. Preoperative (A) and postoperative 2 years (B) photographs of a 52-year-old woman who had elastic face lift and neck lift with skin excision 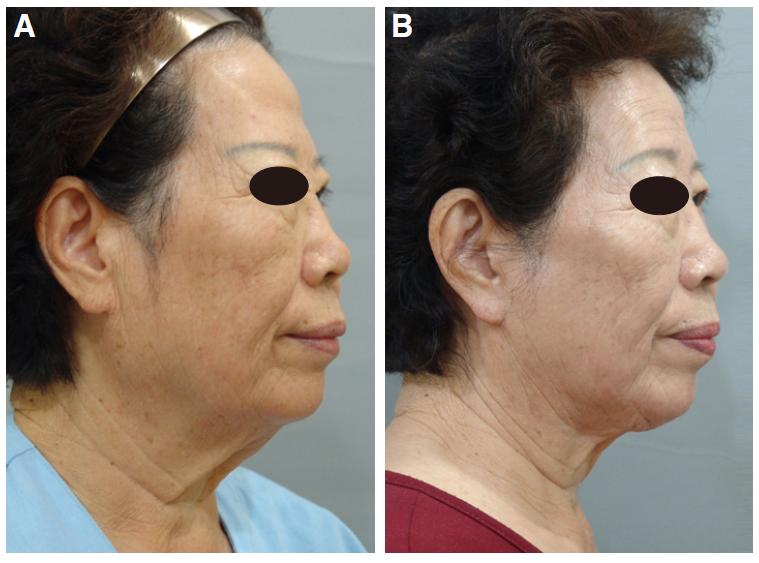 Figure 7. Preoperative (A) and postoperative 3 years (B) photographs of an 80-year-old woman who had elastic neck lift with skin excision

Recently, Kang et al.[8,9] performed an elastic lift using Elasticum® (Korpo SRL) and a two-tipped long needle (Jano needle). He evaluated its efficacy by rating skin laxity (6 grades of sagging and laxity) using a skin scanner. For the facelifts, the preoperative and 3-month postoperative median skin laxity scores were 5 (3-6) and 3 (2-4) respectively. For the neck lifts, the median skin laxity grade score was 5 (4-5) preoperatively and 3 at 3 months postoperatively.

Also, Stringer et al.[10] assessed the surface anatomy of 98 parotid ducts using ultrasonography. In most individuals, the duct is better represented as lying within 1.5 cm of the middle half of a line between the lower border of the tragus and the angle of the mouth. Thereafter, we designed the lowermost point of elasticum suspension superior to the line from below the earlobe to the lower part of the alar nasi to avoid the parotid duct injury.

We tried to standardize the pre and postoperative pictures, however, neck flexion cannot be same. Since neck flexion might influence the cervical angle, mCA was converted to cCA by fixing the SSA at 90° as Ellanbogen and Karlen suggested.[7] Thereafter, cCA can be calculated as mCA plus 90° minus SSA (cCA = mCA + 90° - SSA) [Figure 4].

In the 46 patients that were operated on, suspension was performed with skin excision in 34 patients who had skin redundancies, whereas 12 patients underwent suspension without skin excision. The purpose of skin excision was not to pull the skin, but to prevent tissue from getting jammed. Minor jammed soft tissues were found to have subsided spontaneously within a few weeks.

The advantages of the elasticum suspension are as follows. First, Elasticum® does not cut into the tissues. It is composed of a silicone core and surrounding braided polyester, and the braided polyester effectively acts as a nidus for collagen and elastin to develop, similarly to a neoligament.[11] Second, it has the same consistency as the subcutaneous tissue, and is not palpable after placement. Third, the depth of the thread can be referenced by the depth mark on the Jano needle.

Based on our results, it appears that the elasticum suspension technique may be a satisfactory minimally invasive method for neck lifts. Elasticum suspension can be performed together with submental and superficial jowl liposuction. If necessary, a perioral fat graft could be performed. This technique could be also applied to the lifting the upper lip or breast, as well as scar revisions.

We thank Miss Seong Kyung Yoo, BS, for her help in measurement and being object of Figure 4.

Informed consent was obtained from paients.

All procedures performed in studies involving human participants were in accordance with the ethical standards of the institutional and/or national research committee and with the 1964 Helsinki declaration and its later amendments or comparable ethical standards. 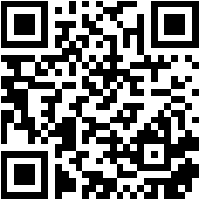