Methods: Ear reconstruction was performed in 3 operative stages. During the first procedure, a 50-80 mL kidney or cylinder-shaped expander was implanted deep to the subcutaneous fascia of the retroauricular mastoid region. Over a period of 3-5 months, the expander was filled to a final volume of 80-110 mL. In the next operation, the retroauricular fascia was eliminated or reserved following expander removal, and the autogenous costal cartilage framework was placed below the expanded skin flap. At the third and final stage, the earlobe transposition, tragus construction and conchal deepening were performed.

Results: A total of 165 patients (166 ears) were reconstructed using tissue expansion and an autogenous rib cartilage framework. Complications included hematomas in 3 cases, expander exposure in 8 cases, cartilage exposure in 6 cases, infection and cartilage resorption in 2 cases, exposure of steel wire in 4 cases, and aseptic seroma in 2 cases. Follow-up ranging from 3 months to 5 years showed that 159 patients were satisfied with the reconstructed ear including size, location, projection, convolution, skin-colour matching, symmetry with opposite ear.

Conclusion: Expansion of the retroauricular skin and fascia can provide sufficient non-hair-bearing skin and tissue for coverage of a three-dimensional costal cartilage framework. Avoidance and prompt treatment of complications are advised in order to obtain a satisfactory reconstruction of the ear.

From August 2005 to August 2015, 165 patients with 166 cases of congenital microtia were reconstructed using fully expanded retroauricular skin and fascia flaps combined with an autogenous costal cartilage framework at the Department of Plastic Surgery of the Second Affiliated Hospital of Kunming Medical University. Among these patients, 112 (67.9%) were males and 53 (32.1%) were females. Patient age ranged from 7 to 52 years (average 15.8 years). Of all patients, 110 cases (66.7%) of microtia involved the right ear, 54 cases (32.7%) involved the left ear, and 1 case was bilateral [Table 1].

For the patient with left-side microtia [Figure 1A], during the first procedure, a 4-cm length incision parallel to the hairline was made on the scalp and a subfascial fascia pocket was dissected. After meticulous haemostasis was obtained, a 50-80 mL (corresponding to the size of the opposite auricle) kidney-shaped or cylinder-shaped tissue expander was implanted under the fascia pocket, with the valve of the expander placed in the subcutaneous tissue of the scalp or left externally. A negative-pressure drain was placed inside the pocket prior to closure of the incision. The suction drain and the suture were removed 6 days and 10 days postoperatively, respectively. Tissue expansion was performed twice a week beginning 7 days after surgery and continuing until the targeted volumes were achieved [Figure 1B]. The second stage was performed following the completion of expansion. Preoperative computer tomography (CT) of the rib cartilage to be used for reconstruction was performed to assess for the degree of calcification and to measure rib cartilage parameters (length, width, and thickness). At the final surgery, the fascia was separated from the skin flap following removal of the expander, and the remnant ear cartilage was carefully dissected and preserved. Based upon the preoperative CT of the costal cartilage, normal costal cartilage from the seventh to ninth contralateral ribs were harvested by another surgical team [Figure 1C]. The harvested costal cartilages were then carved to include the structure of the ear, including the scapha, helix and triangular fossa [Figure 1D]. The redundant cartilage pieces were assembled to form a crescent-shaped pad and were inserted beneath the carved costal cartilage in order to enhance projection. The cartilage complex was assembled with 5-0 stainless steel wire and placed into the expanded pocket. The size, location and angle of the cartilage framework were adjusted until the reconstructed ear was consistent with the opposite ear. The drainage tube was inserted between the flaps and the cartilage framework. Finally, the shape of the reconstructed ear appeared after the drainage worked [Figure 1E]. The reconstructed ear was not covered dressing and a pressure dressing was applied to the retroauricular region. The dressing was removed on the first postoperative day to prevent infection. In order to maintain effective suction, the drain was evacuated every 2 h during the initial 24 h postoperative. The drain and sutures were removed at 6 and 10 days following surgery, respectively. Three to five months later, the malpositioned earlobe was transferred and connected to the reconstructed ear, the redundant cartilage and earlobe soft tissue were excised, and excess subcutaneous tissue was removed in order to deepen the conchal bowl [Figure 1F]. 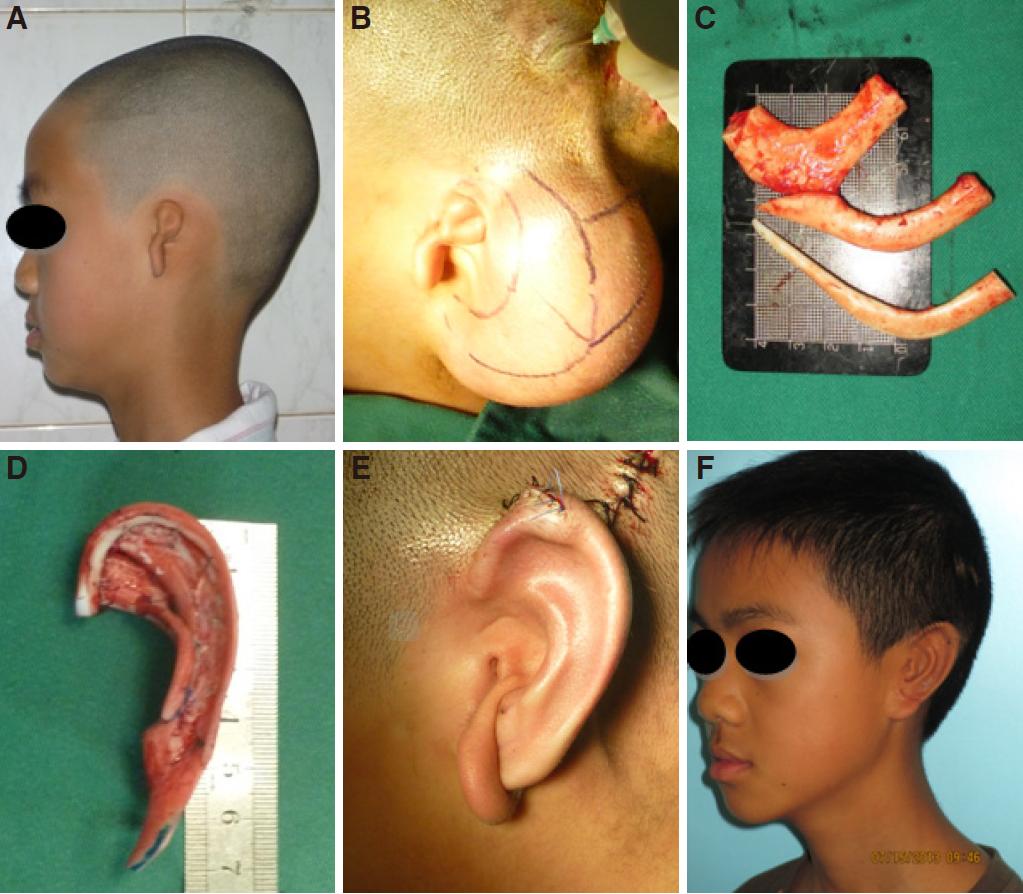 A total of 166 ear reconstructions were performed in 165 patients with microtia. There were three cases of hematoma, but expansion was successfully accomplished following evacuation. Exposure of the tissue expander occurred in 8 cases, which were performed ear reconstruction ahead of time using expanded skin and temporoparietal fasical flap with skin grafts. After the second stage, exposure of the cxf occurred in 6 patients, and was repaired by use of a local skin flap or temporoparietal fascia flap and skin graft. Infection occurred in 2 patients and was treated with systemic antibiotics. For these two patients on the third surgery of earlobe transposition, skin graft was performed ahead of time, which resulted in poor reconstructed ear because of partial absorption of cartilage. Sterile seromas occurred in 2 cases 2 weeks postoperatively. No seroma accured again after negative press suction. Fracture of upper pole of the ear framework occurred in 4 cases, creating a less satisfactory auricular contour. Extrusion of the steel wire occurred in 4 cases. Other complications included 1 case of pneumothorax, 1 case of cervical vertebral subluxation, and 5 cases of hypertrophic scars at the chest harvest site. All complications were successfully treated [Table 2]. The postoperative satisfaction rate was 96.4% (159/165).

Since Hata et al.[7] initially used a tissue expander for correction of congenital microtia. Since then, ear reconstruction using an expanded retroauricular skin flap and autogenous costal cartilage has been widely used.[8-10] Skin expansion provides non-hairbearing, thin and well-vascularized skin. However, a 3D framework and skin grafts are often required as well.[8,9] Liu et al.[5] and Zhang et al.[6] have reported the use of 2 expanders for ear reconstruction without skin grafting. However, this method increases the complexity of the operation and increases the risks of complications associated with expansion, including hematoma, exposure, and an obvious post-auricular scar. Chen et al.[11] reported implanting a 50-mL kidney-shaped expander in the retroauricular mastoid region and infusing saline solution to a final volume of 100-120 mL. In this fashion, sufficient retroauricular non-hair-bearing skin was obtained for coverage of the auricular cartilage framework without the use of skin grafts or a retroauricular fascial flap. This method of over-expansion nonetheless risks complications including exposure, skin necrosis, and possible elongation of expansion time, or even failure of expansion.

In order to reduce the complications mentioned above, we implanted a 50-80 mL expander beneath the retroauricular fascia to reduce the risk of exposure, and infused saline solution for a total volume of 80-110 mL to fully expand the fascia and skin. The region of non-hairbearing skin in the mastoid is relatively small, and therefore an 80 mL expander was selected. At the second stage operation, the integrated fascial flap was dissected and covered to the cartilage framework, only imperfect fascia was removed. The thickness of the expanded skin flap was approximately 1.5 mm through treated, it can wrap erect 3D framework and reproduce reconstructed auricle substructure.

Harvesting ipsilateral rib cartilage has been recommended by Nagata[4] and Firmin.[12] Dashan et al.[13] routinely harvested rib cartilage from the right side in order to protect the left chest wall and the heart. In the current study, contralateral costal cartilage was routinely harvested to take advantage of the natural bend and tortuosity of the contralateral costal cartilage. After nearly 3 years of observation, there were no side effects to donor site. In this study, a two-dimensional X-ray template combined with a 3D plaster model was used to fabricate a cartilage framework similar to that of the opposite normal auricle. Jiang et al.[14] have reported the use of four different methods to sculpt the cartilaginous framework. In our patients, we used 3-4 layers of costal cartilage to fabricate the framework, which is similar to Jiang’s technique.[14] In adult patients, the seventh rib cartilage was divided into two parts, with the external portion used for the helix and superior crus, and the internal portion used for the main body of the framework, the other cartilage were used for base to increase protrusion.

This work was financially supported by the grants of National Natural Science Foundation of China (No.81660319), and Health Science and Technology Plan Projects of Yunnan province (No.2016NS266).

The patient gave full written consent to the use of images for publication.

We declare that our research was carried out in a high ethical standard, and the research protocol was approved by our local Ethical Committee. 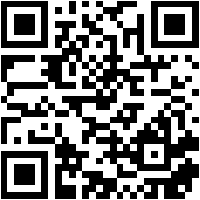