The authors present the double-paddled pectoralis major myocutaneous flap as a successful alternative for the reconstruction of complex orocervical defects following failure of prior microvascularized free flaps or free flap harvest is not feasible. This method was used for the reconstruction of post-ablative defect in a 36-year-old male with a T4 squamous cell carcinoma of the base of tongue with laryngeal involvement. The distal paddle was adapted to reconstruct a defect of the floor of the mouth and further sutured in two layers (muscle-basal mandible and skin paddle-oral mucosa) while the proximal skin paddle was used to close the cervical skin and the peri-tracheostomy defect.

Reconstruction of large oral cavity defects following resection for advanced cancer is a challenge for reconstructive surgeons. In the microsurgical era, microvascular free flaps constitute the main reconstructive option for achieving excellent aesthetic and functional results. However, in cases of flap failure or inability to harvest a free flap, pedicled flaps provide a reliable alternative with predictable results. The pectoralis major myocutaneous flap (PMMF), considered the workhorse in head and neck surgery, represents one such pedicled flap. In the event of major defects requiring a large area volume for cutaneous coverage and mucosal lining, a modification of the standard technique is required.[1-3]

The authors describe a surgical technique for repair of a complex orocervical defect following failure of microsurgical reconstruction with use of a double-paddle PMMF. A 36-year-old man was diagnosed with T4 squamous cell carcinoma of the base of tongue with laryngeal involvement. Under general anaesthesia, a tracheostomy was performed. A total laryngectomy and partial glossectomy extending to the right base of the tongue were performed by a “pull-through” approach exposing the entire tongue, oropharynx and suprahyoid space. A bilateral modified type III radical neck dissection was performed. The intraoral and primary cervical defects were reconstructed with a microsurgical anterolateral thigh flap. In the postoperative period, the remainder of the tongue underwent total necrosis with subsequent distal flap dehiscence, cervical fistulae and a large defect in the floor of the mouth [Figure 1]. In an attempt to solve these complications by providing sufficient tissue for reconstruction of the floor of the mouth while closing the orocervical fistulae, a PMMF with two skin islands was designed. This flap consisted of two vertically separated skin islands over the area of the pectoralis major myocutaneous vascular territory: one skin island was medial to the nipple-areolar complex and the other was lateral. The skin paddles were designed horizontally. The skin and the subcutaneous fat were closed using vicryl sutures to avoid shearing of perforator vessels vascularizing the skin. The flap was raised using standard surgical technique leaving its proximal paddle pedicled to the arterial plane [Figure 2]. The proximal skin paddle was used to close the cervical skin and the peri-tracheostomy defect [Figure 3A]. The distal paddle was adapted to floor of the mouth and sutured in two layers (muscle-basal mandible and skin paddle-oral mucosa) [Figure 3B]. The donor site was closed primarily and there were no dehiscence defects during the post-operative period [Figure 4]. Both skin islands remain viable to date [Figure 5]. 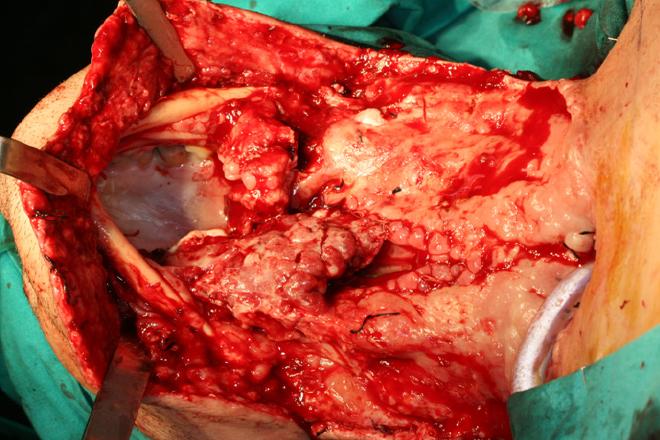 Figure 1. Distal flap dehiscence, cervical fistulae and large defect in the floor of the mouth following failure of a microsurgical anterolateral thigh flap 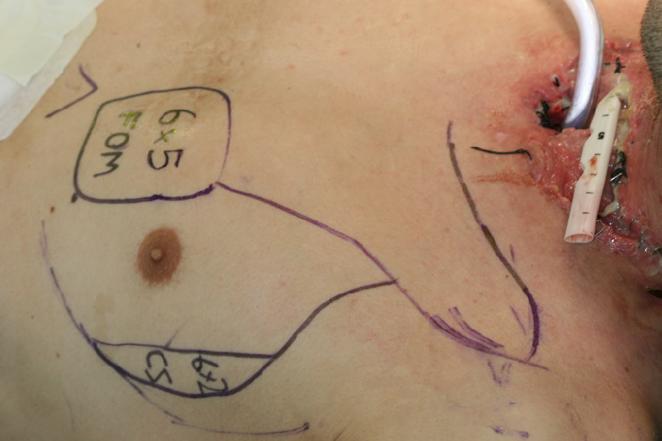 Figure 2. A pectoralis major myocutaneous flap design with two skin islands: one skin island was designed for the floor of the mouth defect with the other skin island for the cervical skin defect 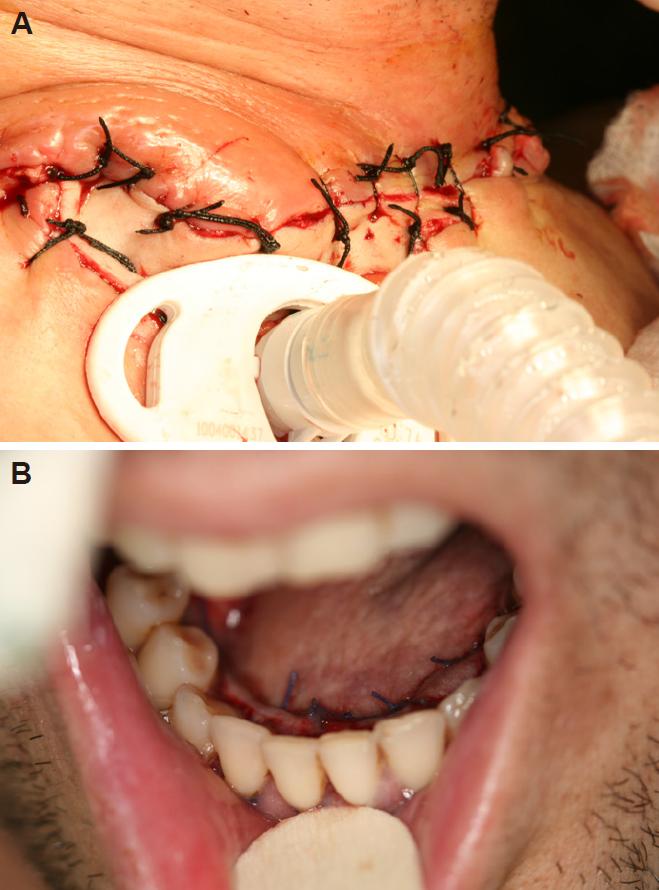 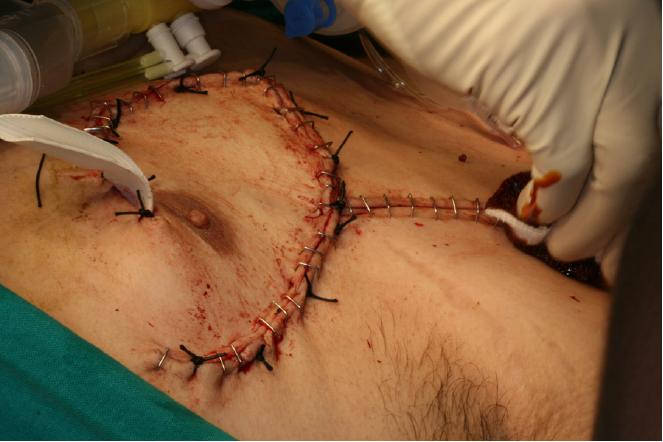 Figure 4. The donor site was closed primarily and remained intact throughout the post-operative period 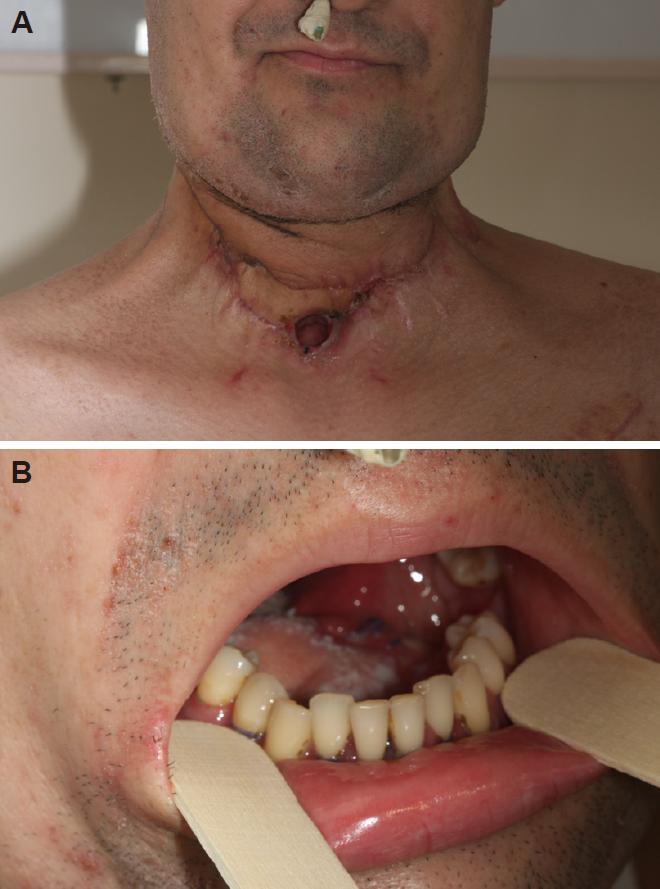 Figure 5. (A and B) Both skin islands remain viable to date

Reconstruction of complex oral cavity defects following oral cancer surgery is a great challenge for the head and neck surgeon. The evolution of myocutaneous and free flaps has achieved good results in the reconstruction of large oncological defects. Currently, microvascular free flaps are considered to be the first option in the reconstruction of head and neck defects. However, in cases of free flap failure or when a free flap is simply not feasible, pedicled flaps provide a reliable alternative with predictable results. The bilobular or double-paddled PMMF simplifies the closure of large surgical defects of both the mucosa and skin which cannot be successfully closed in a primary approach. The closure of defects using a PMMF was first reported in 1979 by Ariyan.[4] This author also described the division of the skin into two parts. Ord and Avery[5] later suggested that placing the skin paddles side-by-side horizontally was less risky than placing them vertically one above the other. The two lobes of the pectoralis major myocutaneous flap evolved from a desire to simplify the closure of large surgical defects of both the mucosa and skin that could not be satisfactorily closed primarily. The mucosal and skin defects are closed by two skin paddles supported by a single muscular vascular pedicle.

In the current case, the double-paddled PMMF was used to reconstruct both intraoral and cervical defects. The distal paddle was adapted to the floor of the mouth and the proximal skin paddle was used to close the cervical skin and the peri-tracheostomy defect. The main advantages[6] of the double-paddle PMMF include: (1) easy access within the same surgical field; (2) shorter operating time; (3) elimination of the need for two separate flaps and a second surgical procedure; (4) technical simplicity with a short learning curve; (5) a reliable vascular framework; and (6) adequate muscle coverage of major cervical vessels, which provides greater protection during radiotherapy. Nonetheless, the success of this flap depends on the arch of rotation and anatomic limitations such as obesity, or the combination of a long neck with a short thorax.

In summary, the double-paddled PMMF can be successfully used for reconstruction of complex head and neck cancer defects following failure of microvascularized free flaps or when free flap harvest is not possible.

Written informed consent was obtained from the patient.

According to the requirements of the affiliation, this article does not require case ethics approval. 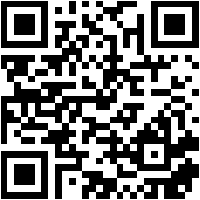