Reduction mammoplasty is one of the most commonly performed operations in plastic surgery and has some of the highest patient reported levels of satisfaction.[1-5] The inferior pedicle Wise pattern technique is considered the “gold standard” due to its consistently reproducible results, even in large reductions;[2,6,7] however, critics of the technique describe the final result as wide, flat, “boxy” in appearance, and lacking in superior pole fullness.[8] More importantly, over time, this technique has been shown to undergo tissue redistribution from the superior to inferior pole. This phenomenon is referred to as pseudoptosis and further exacerbates the lack of superior pole fullness.[2,9-11]

The Robertson technique was first described in 1964[12-14] as an alternative to free nipple grafting in massive reductions. Later modifications incorporated a bell-shaped incision followed by the development of a superior apron flap to lower the position of the transverse bell-shaped scar.[15] These modifications eliminated the vertical midline scar found in the Wise pattern, while offering greater flexibility to manipulate and shape the breast inferior pedicle. Proponents also claim that the modified Robertson technique allows for greater nipple projection, improved preservation of the inframammary crease, and less pseudoptosis.[3,16]

While the use of linear measurements can be used as a proxy for pseudoptosis and changes over time, the advent of 3D photography and stereophotogrammetry has allowed for volumetric measurement and objective analysis of breast outcomes.[17-19] The use of 3D mammometrics has been validated over the last decade, and has been established in the analysis of breast reductions.[20-23]

After obtaining Institutional Review Board approval, patients seeking breast reduction operations between 2012 and 2014 were invited to participate in this study. Patients were randomly assigned by the scheduling department to either surgeon A, who used a modified Robertson skin incision pattern, or surgeon B, who used a Wise pattern. Exclusion criteria included age less than 18 years or more than 65 years, the history of breast surgery, the history or presence of breast malignancy, and the significant weight change affecting breast volume during the course of the study. Outlier patients with extreme body mass index (BMI) (> 40 kg/m2 or < 26 kg/m2), postoperative breast volume at early postoperative time point (< 400 mL or > 1,300 mL), and the weight of breast tissue resected (< 400 g or > 1,300 g) were also excluded.

Both surgeons marked patients in the standing position preoperatively, placing the nipple position at Pitanguy’s point. In the modified Robertson cohort, the IMF incision was then determined 8 cm below the new nipple position and marked accordingly. Intraoperatively, the new IMF marking was used to elevate a superior breast apron down to the chest wall. The inferior pedicle was created with a base width of 12-16 cm, depending on the length of the nipple to IMF. Once the pedicle was defined, the intervening tissue was removed, and the apron was draped over the pedicle with transposition of the nipple. In the Wise cohort, the pedicle width was 10-12 cm, and the vertical skin incision was made 6-7 cm below the areola.

Statistical analysis was completed using Statistical Package for the Social Sciences. Independent samples t-tests and chi-squared tests (Fischer’s exact) were used where appropriate and a P ≤ 0.05 was considered statistically significant. With an estimated 3% effect size in the modified Robertson group and 6% in the inferior pedicle group for tissue movement to the inferior pole, a common standard deviation of 2, a 0.5 level of significance, and a 0.8 power level, the sample size was calculated to be 7 in each cohort.

Twenty-two patients consented and completed the required components of the study. Two patients were excluded as outliers due to excessive BMI and excessive volumes resected, and 1 patient was excluded due to low BMI. In total, there were 14 measured breasts in the modified Robertson cohort (ROB) and 24 breasts in the Wise cohort (WISE). 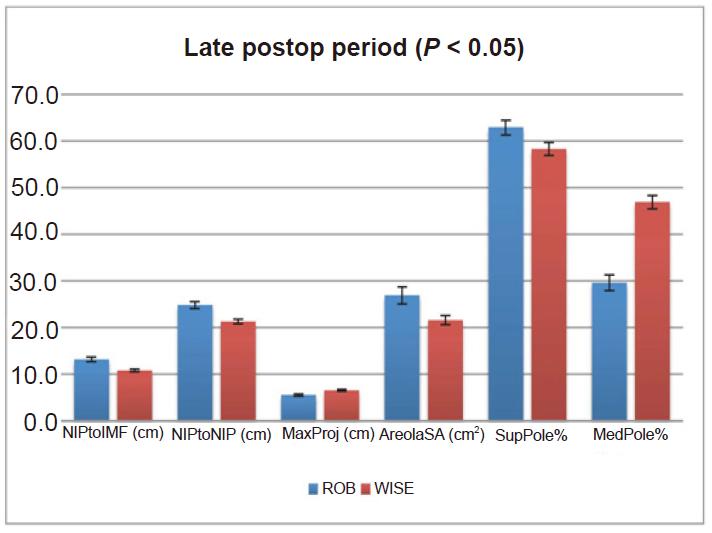 Comparing changes over time between modified Robertson vs. Wise cohorts 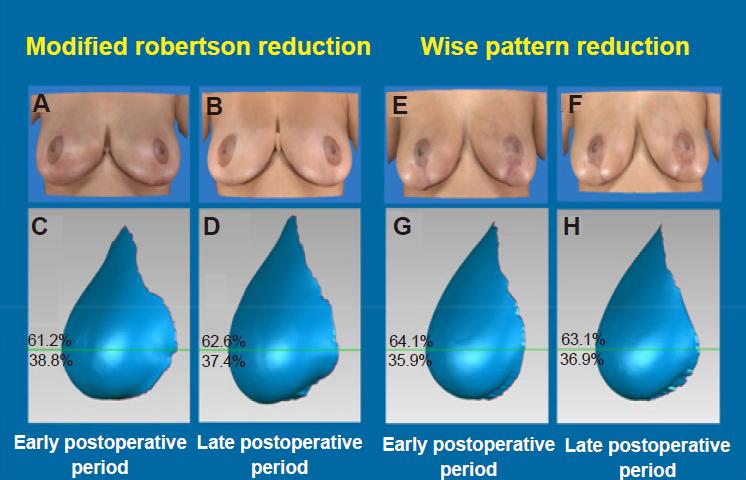 Interestingly, total volume increased in the modified Robertson cohort but decreased in the Wise cohort; this difference was statistically significant (46.7 mL ROB vs. -20.1 mL WISE, P = 0.04). The change in percent superior pole volume was greater in the modified Robertson cohort (3.36%) than the Wise cohort (1.42%); however, this difference did not reach statistical significance (P = 0.28). The change in percent medial pole volume (2.57% ROB vs. 1.36% WISE, P = 0.60) was not significantly different between the two cohorts.

This study is the first to use 3D mammometrics to provide quantitative analysis comparing the modified Robertson and Wise patterns for inferior pedicle reduction mammoplasty. Movassaghi et al.[15] directly compared the two skin patterns in breast reduction; however, their analysis focused on complication rates of hematoma, minor wound dehiscence, and scar hypertrophy. They found a reduced complication rate in the modified Robertson technique with decreased skin breakdown, since this skin pattern does not have an intersecting triple point. Chalekson et al.[3] evaluated morphologic outcomes of modified Robertson patients; however, they compared the results to aesthetically optimal breasts, instead of other reduction patients. Their recorded outcomes included patient satisfaction, symptom reduction, scarring, nipple position, ptosis, pseudoptosis, shape, and overall appearance several years following surgery. They found excellent satisfaction among patients and no difference between their reduction patients and aesthetically ideal patients with regards to pseudoptosis.

Using 3D analysis to compare the late postoperative result of the modified Robertson to the Wise pattern breast reduction, the modified Robertson technique demonstrated greater superior pole volume by approximately 5%. This difference was both statistically and clinically significant. Previous research by Mallucci et al.[24] analyzed breast photographs with 5% differences in superior to inferior pole ratio to determine ideal breast shape, finding that the 45:55 ratio was aesthetically preferred over the 50:50 ratio. It is possible that the superior breast apron of the modified Robertson technique supports the inferior pedicle and maintains superior pole volume without the presence of a vertical incision in the Wise pattern technique.

In addition, the Wise technique demonstrated greater medial pole volume by approximately 17% and greater maximum breast projection by 1 cm. The presence of a vertical scar may distribute the inferior pedicle medially and narrow the width of the breast, leading to improved breast projection. The vertical incision may also prevent lateral migration of the nipple position as demonstrated by the smaller internipple distance in the Wise pattern cohort (21.3 cm WISE vs. 24.8 cm ROB, P < 0.01).

The modified Robertson cohort consistently demonstrated longer nipple to IMF distances compared to the Wise pattern, and this can be explained by the surgeon preference to widen the skin bridge of the breast apron below the areola to minimize ischemic complications.

The areola surface area was consistently larger in the modified Robertson cohort compared to the Wise pattern cohort at all time points. Both surgeons reported using the same 38 mm “cookie cutter” when insetting the areola; however, the superior breast apron of the modified Robertson places greater tension and outward pull on the areola compared to the Wise pattern. Despite these absolute differences, the areola surface area in both cohorts increased equally over time. The inferior pedicle may apply pressure and weight behind the areola that results in similar expansion over time.

Although statistically significant, some of the measured differences between the two cohorts were clinically small and may seem within the margin of error for 3D analysis. This error in 3D analysis is the result of limitations of 3D photography and minor computational inaccuracies in the software. This is especially true when measuring the lower pole and determining the IMF in patients with extremely ptotic breasts. However, we firmly believe that these measurements are valid since each image was measured three times, averaged, and pooled with other images within the same cohort. User dependent differences in making measurements can also lead to inaccuracies in 3D analysis; however, all measurements were performed by the same person, who had extensive experience performing 3D analysis. This study is also adequately powered as determined by the sample size calculation and the fact that the results were statistically significant.

This report represents the outcomes of individual surgeons at one institution and considering that there are many technical variations within each technique, the results may not be generalizable to all surgeons. It is possible that the variation in surgical technique, rather than the chosen skin incision pattern, has a greater impact on volumetric distribution. Further study of other surgeons who perform these techniques could determine reproducibility of our results. Future studies could also evaluate whether further morphologic changes occur in the 6-12 month time frame. Larger sample sizes will also help to further support our findings.

In conclusion, using 3D mammometrics, our results suggest that in the late postoperative period, the modified Robertson technique provides increased superior pole fullness, whereas the Wise technique provides increased medial pole fullness and maximum breast projection. These quantitative results allow plastic surgeons to choose the technique that may be most suitable for a patient seeking reduction mammoplasty.

Approved by the Institutional Review Board. 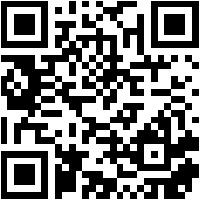