Methods: This retrospective study was undertaken in the department of plastic surgery, over a period of 2 years. Nine patients with scrotal or penile injury and infection were enrolled in the study. Age of the patients ranged 20-60 years. Five patients had traumatic loss of scrotal skin and 4 resulted following necrotizing soft tissue infection. All patients underwent hyperbaric oxygen therapy before and following surgery.

Results: Healing was complete in all patients with minor complications as partial skin graft loss in 2 patients. Five patients (55.5%) had sustained the soft tissue loss due to trauma. The cause of necrotizing fasciitis was found in 4 patients (44.4%). The mean length of hospital stay was 42.5 days.

Conclusion: Management of soft tissue loss of penoscrotal region requires an organized approach and the utilization of newer modalities for early recovery of these injuries is of primary need. Operating surgeons should know the various reconstructive pathways and use of adjunct measures like hyperbaric therapy for early recovery.

Scrotal soft tissue loss is one of the perplexing conditions for plastic surgeon. The non-availability of adequate nearby healthy soft tissue and its probability of recurrent faecal and urinary contamination make the issue of reconstruction complicated. All necessary effort to decrease the time period of healing of scrotal wounds should be undertaken as the condition may increase the morbidity following these injuries. Most of these patients suffer multiple co-morbidities and are immune-compromised adding to the complication of such conditions. We present our experience with penoscrotal soft tissue loss with hyperbaric oxygen therapy as an adjunct.

This retrospective study was undertaken in the department of plastic surgery, over a period of 2 years from January 2012 to December 2014. The records of patients who underwent scrotal reconstruction were reviewed. Nine patients with scrotal or penile injury and infection were enrolled in the study. Informed written consent was obtained from all the patients enrolled in the study. Age of the patients ranged 20-60 years. Five patients had traumatic loss of scrotal skin and 4 resulted following necrotizing soft tissue infection. No patient had injuries or infection to urethra. Patients with necrotizing soft tissue infection of the scrotum were diabetic. Rest of the patients did not have any comorbidity. All patients underwent hyperbaric oxygen therapy before and following surgery. Patient requiring intensive care unit admission was excluded from our study, as we are not equipped with hyperbaric oxygen therapy settings in critically ill patients.

The mean patient age was 41.5 years. Five patients (55.5%) had sustained the soft tissue loss due to trauma. The cause of necrotizing fasciitis was found in 4 patients (44.4%). The majority of necrotizing soft tissue infection was referred to plastic surgery following initial debridement in general surgery or urology department. All of the patients underwent multiple surgical debridements when required and several reconstruction techniques were utilized as mentioned in Table 1. The median length of hospital stay was 42.5 days. Healing was complete in all patients with minor complications as partial skin graft loss in two patients, which required repeated skin grafting procedure. Patients were satisfactory in terms of aesthetic outcome and sexual life during the follow up period.

Patients with soft tissue loss and methods of reconstruction

A 23-year-old patient came with avulsion injury due to road traffic accident with loss of soft tissue in the peno-scrotal region [Figure 1a]. Wounds debrided and soft tissue loss was reconstructed with bilateral pedicle gracilis muscle flap cover and split thickness skin grafting [Figure 1b and c]. Six sessions of hyperbaric oxygen therapy were administered. Wounds healed well [Figure 1d and e] and the patient was discharged in three weeks following injury. 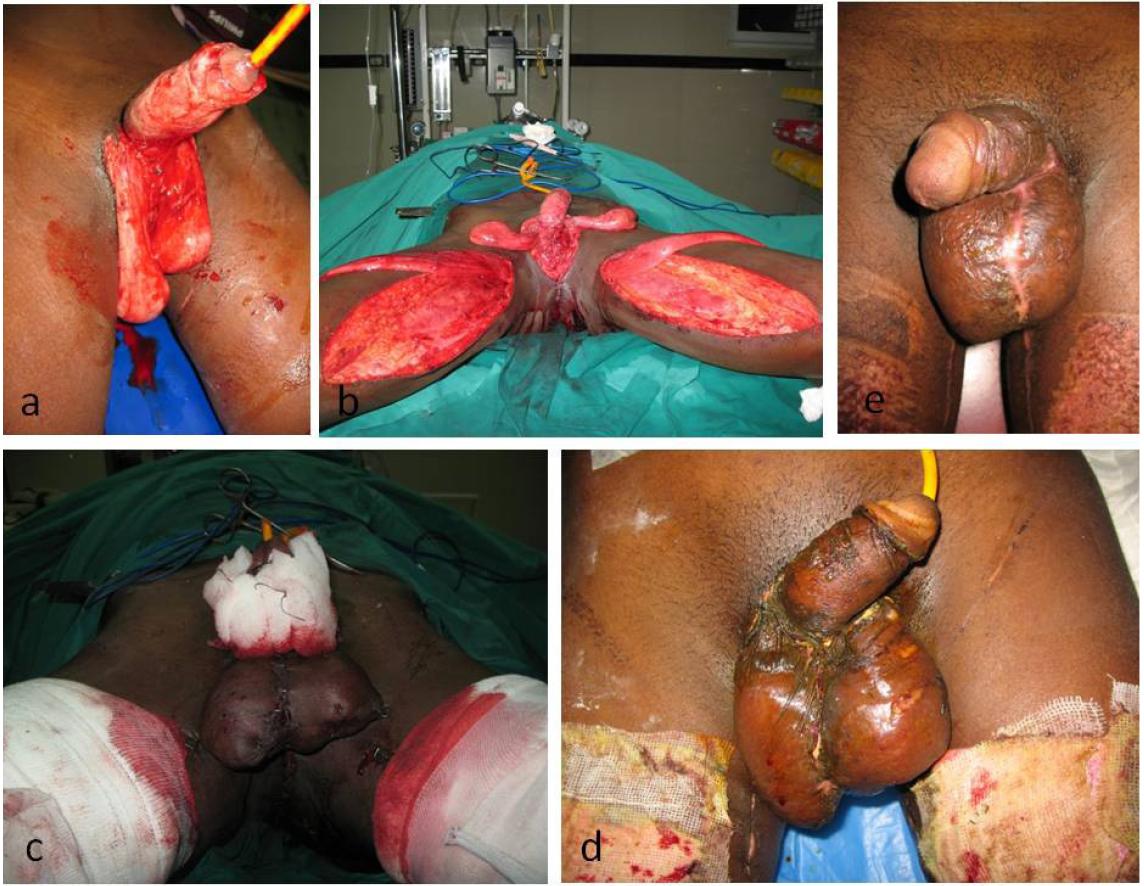 A 35-year-old patient has come with avulsion injury due to road traffic accident with loss of soft tissue in the peno-scrotal region [Figure 2a]. Wounds debrided and soft tissue loss was reconstructed with Superomedial thigh flap [Figure 2b and c]. Donor area closed primarily [Figure 2d] and penile region covered with skin graft. Six sessions of hyperbaric oxygen therapy were administered. Wounds healed well [Figure 2e] and the patient was discharged by four weeks following injury. 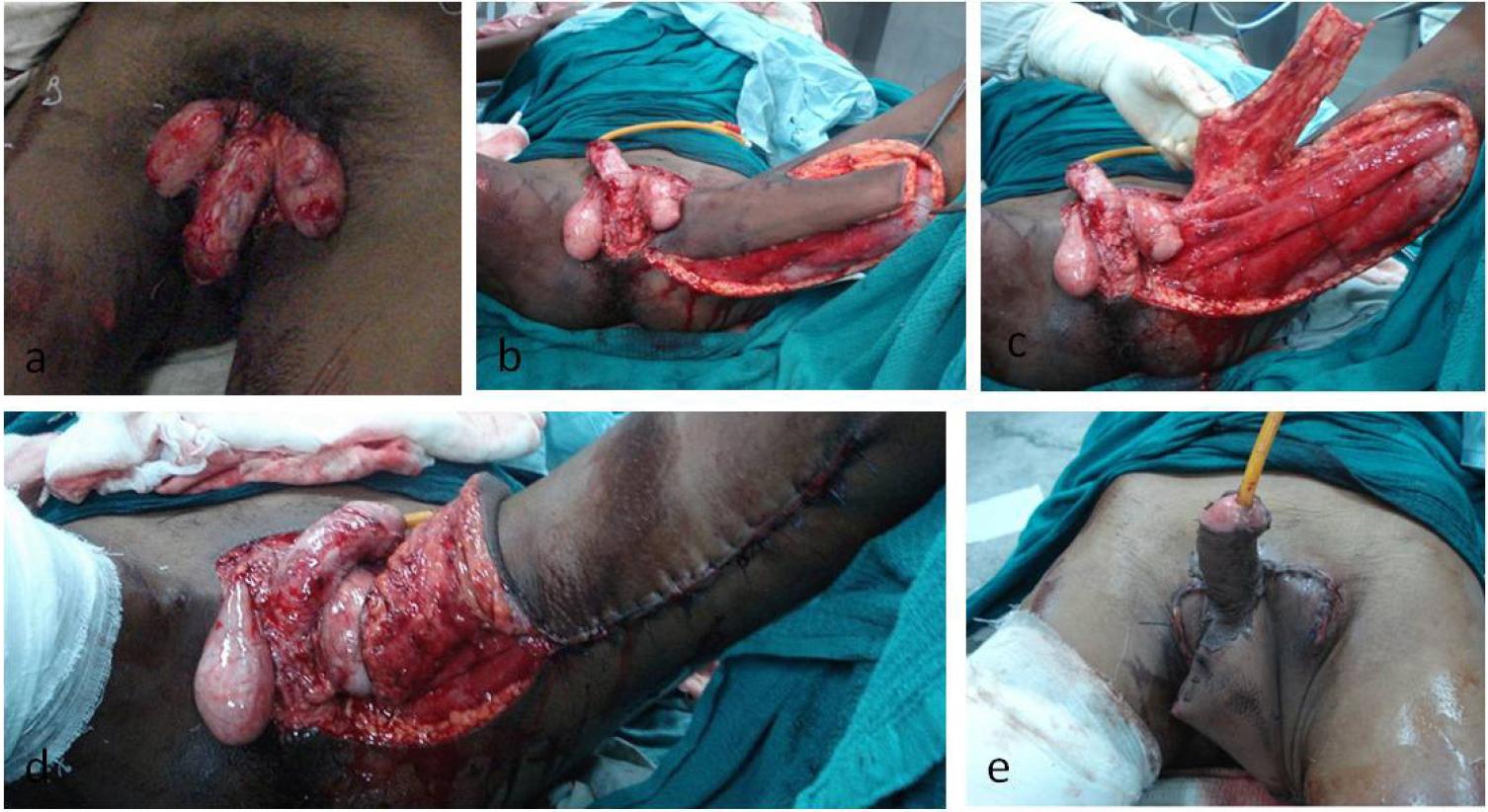 A 55-year-old patient presented with necrotizing soft tissue infection of the scrotal region [Figure 3a]. Debridement of necrotic tissue has done [Figure 3b and c]. The patient subjected to hyperbaric oxygen therapy 18 sessions. Skin grafting was done once the wound was healthy [Figure 3d-f]. Duration of stay in hospital was 56 days. 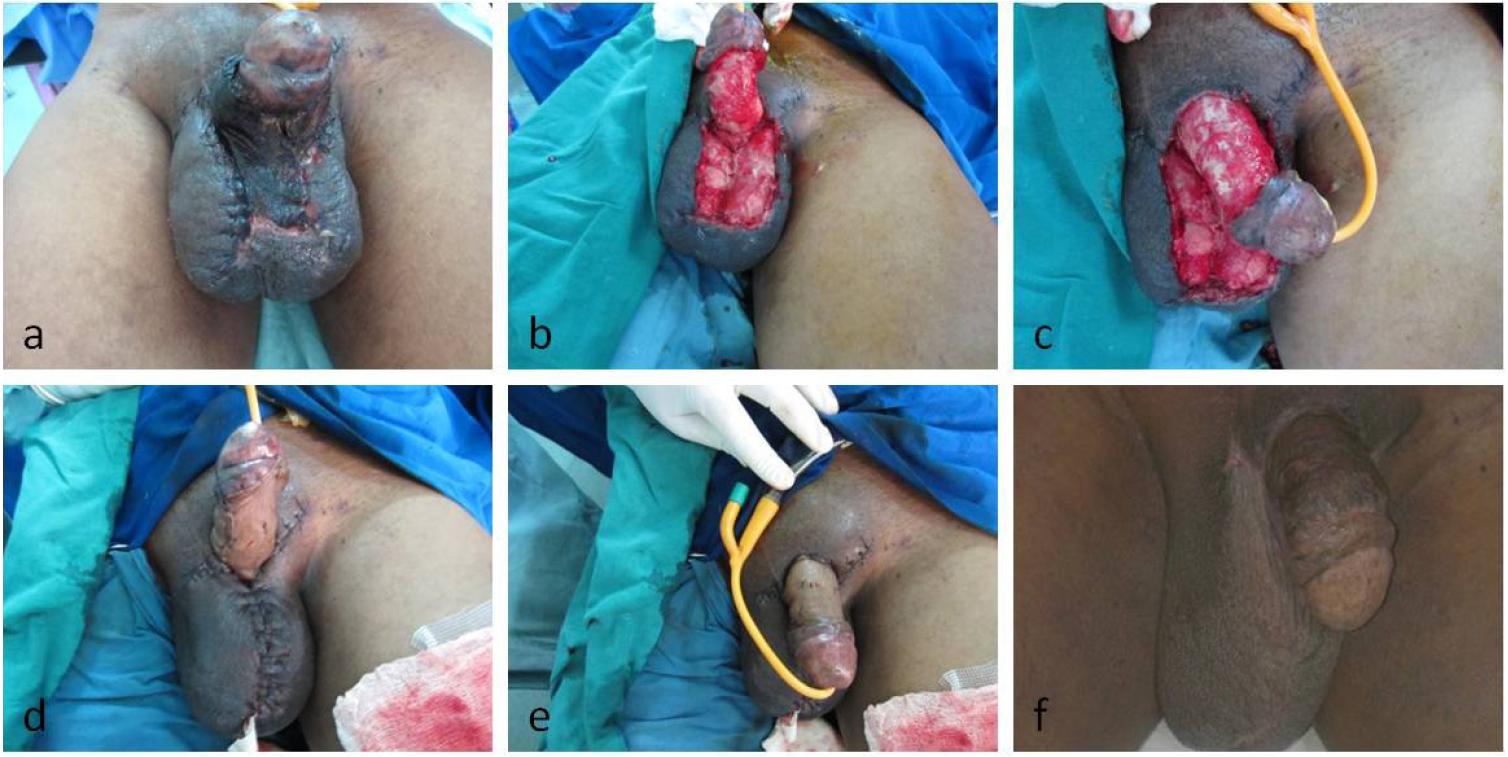 Scrotal injuries are of a highly distressing wound to the patients and serious surgical problem resulting in a high incidence of morbidity and mortality. The key in management of scrotal injury is timely planning of the type of management and execution of surgeries in appropriate time. Most of the scrotal avulsion injuries are associated with loss of penile skin. Soft tissue reconstruction when delayed may result in the onset of infection due to contamination from excretory substances. Immediate reconstruction following wound debridement reduces the morbidity resulting from scrotal injuries.

Invasive group A streptococcus was considered to be the most frequently isolated causative bacterium in necrotising soft tissue infection.[1] About 20-70% of the patients may have diabetes mellitus with necrotizing infection of scrotum.[2] Other predisposing factors include alcoholism, intravenous drug use, low socioeconomic status, immune disorders, and cancerous conditions.[3] Urgent debridement of necrotic tissue and the need for repeated debridements till the infective focus is removed becomes the crucial measure for early recovery. Multidisciplinary approach involving urologist, microbiologist and nutritionist should be taken into consideration. Further progression of the disease could be eliminated by prompt administration of hyperbaric oxygen therapy, which provides optimal tissue oxygenation, enhances the host’s bactericidal mechanism and promotes wound healing. The vascularity to the tissue involved is disrupted due to necrotic fascia, which results in a hypoxic and oedematous environment.[4] Hyperbaric oxygen administration increases tissue oxygen tension in necrotizing fasciitis with delivering oxygen to the critically ischaemic areas. Further, hyperoxia helps in increasing the antibiotic efficiency, improves white cell killing efficacy and reduces inflammation which aids to the outcome of reconstruction in scrotal region.[5]

Surgical intervention remains dynamic with debridement and soft tissue reconstruction when the wounds are healthy. Plastic surgical ladder of reconstruction could be applied to reconstruct the tissue loss in terms of primary or secondary suturing, skin grafting, local advancement flaps, fasciocutaneous flaps, muscle flaps, myocutaneous flaps or perforator flaps. General condition of the patient, site, size, location of the defects and the availability of donor tissue all are considered before proceeding to reconstruction. Surgical options include gracilis muscle flap, superomedial thigh flap, anterolateral thigh (ALT) flap, pudendal thigh flap, vertical rectus abdominis myocutaneous flap or Split thickness skin grafting. The split-thickness skin graft is not functionally and aesthetically pleasing in terms of reconstruction of scrotal tissue and hence not preferred frequently unless all the measures of reconstructions were failed.

Pedicle gracilis muscle flap is useful in cases of unilateral or bilateral scrotal tissue loss. Gracilis muscle flap eliminates the dead space and provides appropriate padding of testicular tissue with appropriate cosmetic appearance. This well vascularized muscle flap prevents bacterial inoculums and provides optimal wound healing.[6] Superomedial thigh flap is another alternative for soft tissue reconstruction of the scrotal region. The genital branch of genitofemoral nerve and ilioinguinal provides sensation to the flap. Flap has a sensate component compared to the gracilis flap but may be bulky and may not be aesthetically pleasing. Partial wound dehiscence, serous fluid collection at the donor site, paraesthesia over the anterior part of thigh and bulky flaps were significant to note as complications in utilizing these flaps.[7] The pudendal thigh flap is another fasciocutaneous flap are relative simple for flap elevation with reliable. The donor site can be closed primarily and no muscle function is sacrificed. Other Flaps are ALT flap and vertical rectus abdominis muscle flap, which may require long transit of pedicle, microsurgical expertise, increased donor site morbidity, and may result in a bulky flap.

Gracilis muscle flap for scrotal reconstruction easily covers the scrotal defects with deep pockets. As the muscle flap is well vascularized, there is greater resistance to further infection, adequate bed for skin grafting, also eliminates the risk of skin loss associated with potentially non reliable skin paddle in the myocutaneous or fasciocutaneous flap. Donor site morbidity considerably less compared to the superiorly based medial thigh flap and the flap is aesthetically well appealing. Disadvantage of the flap is the need for microsurgical expertise for flap elevation.[8] Superiorly based medial thigh flap is early single staged sensate flap coverage. The flap has the advantage of utilizing a single lower extremity and the ipsilateral gracilis muscle flap could also be included if the defects are larger. Donor area could be closed primarily which prevents the need for skin grafts. Flap dissection is easier compared muscle flap with fewer kinks at the pedicle and dog ear formation. However, in fatty individual, it results in bulky neoscrotal bag and there will be difficulty in the transposition of the flap to the scrotal region.[9] Skin grafting to the scrotal defect is useful in Fournier’s gangrene where there is adequate granulation tissue formation filling the deep pockets in the testicular region. The technique is quite simple and easily reproducible compared to the flaps. The reconstruction also provides tension-free, cosmetically appealing scrotum with complete testicular coverage. The disadvantage of skin grafting technique is that it may require multiple stages if the wound bed is not even or healthy. Deep pockets in the testicular region following trauma are difficult to cover with skin grafting procedure.[10]

Our preferred method of scrotal reconstruction in posttraumatic defect is gracilis muscle flap with skin grafting. Skin grafting is preferred for necrotizing fasciitis involving the scrotal and testicular region. Hyperbaric oxygen therapy as an adjunct enhances the recovery in both traumatic and infectious condition. 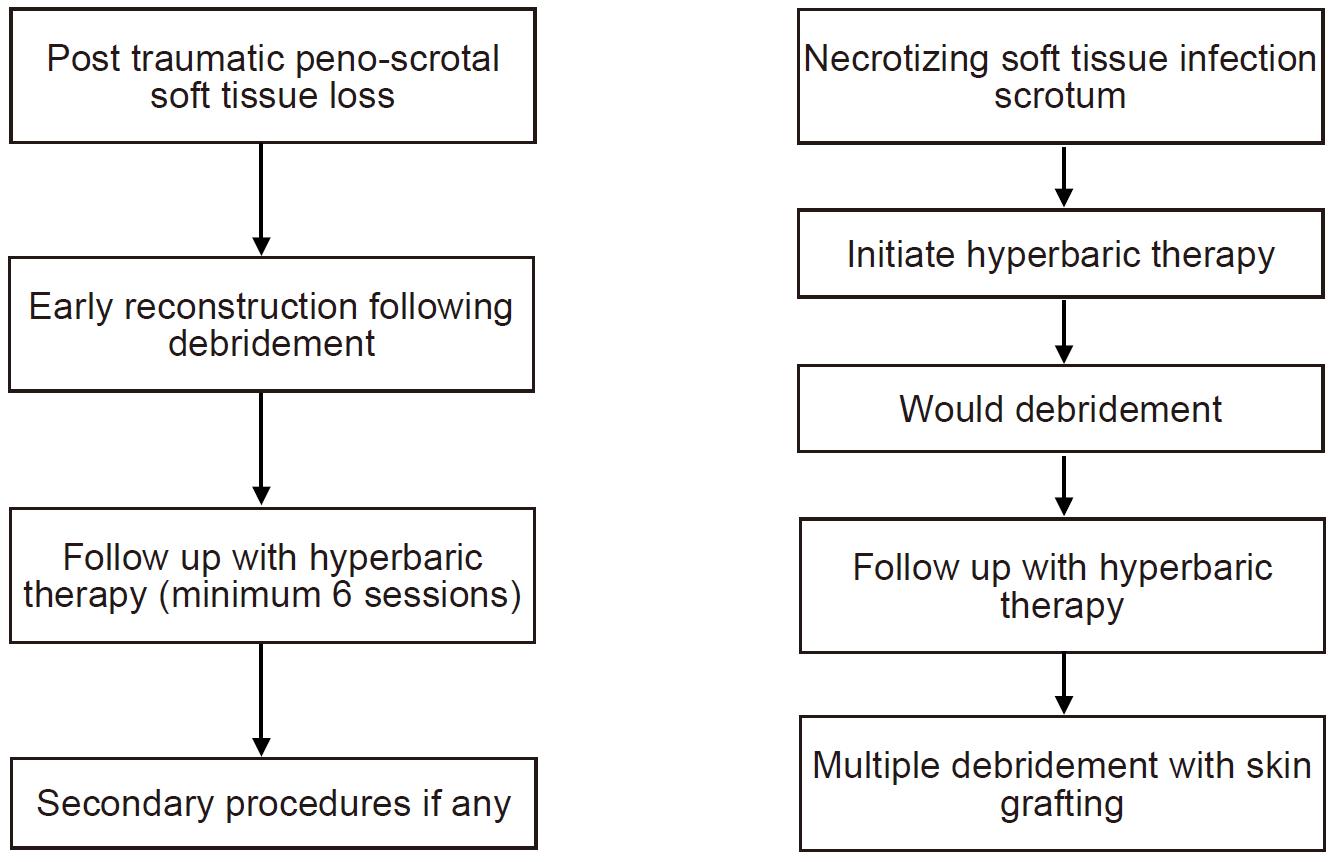 In conclusion, management of soft tissue loss of peno-scrotal region requires an organized approach and the utilization of newer modalities for quick recovery of these injuries is of foremost need. Operating surgeons should know the various reconstructive pathways and use of adjunct measures like hyperbaric therapy for prompt recovery. 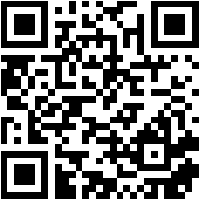