Alloderm was the first acellular dermal matrix used and remains a popular choice among plastic surgeons. However, while the overall surgical outcome of breast reconstruction using alloderm has been a success, the economic burden on the health care system makes it a subject of frequent re-evaluations in cost-effectiveness. Prompted by the high price of $3,700 USD for a 6 cm × 16 cm area, our group proposes the meshing of AlloDerm to decrease the total amount needed for breast reconstruction, while achieving comparable surgical outcomes as using unmeshed alloderm.

The use of acellular dermal matrices (ADM) in breast reconstruction has grown in popularity in the last decade, stemming from the increase in implant based reconstruction requiring adequate lower pole coverage.[1] Our idea of meshing ADM originates from a common surgical technique used for skin grafting.

Alloderm is an acellular human tissue matrix derived from cadaveric tissue that exhibits regenerative properties.[3] All donor cells and allergenic epitopes are removed, leaving a collagen scaffold, growth factor receptors, and vascular channels that aid in tissue regeneration with minimum scarring and fibrosis. The utility of alloderm is based on its ability to integrate and promote neovascularization in the wound bed.[4] It follows the principles of skin graft healing and can therefore be easily incorporated into host tissue as a suitable alternative. These properties make alloderm an excellent support material for breast reconstruction.

Alloderm has been used since 2005.[5] Lower pole coverage was achieved by suturing alloderm to the caudal aspect of the pectoralis major and at the level of the inferior and lateral mammary folds. The benefits of alloderm include reducing implant exposure, visibility and palpability, preventing window shading, better defined inframammary and lateral mammary folds, and allowing for a more natural breast shape.[5]

AlloDerm was initially developed to solve problems with lower pole coverage. Depending on the size of the breast, the quantity of alloderm sheets per operation may vary, leading to increased costs. Meshing alloderm is a novel technique that increases the surface area of usable ADM while maintaining structural integrity.

A sheet of alloderm regenerative tissue matrix (LifeCell Corportation, Branchburg, NJ) measuring 6 cm × 17 cm = 102 cm2[Figure 1] and having a thickness of 1.0 mm ± 0.2 mm (thin type) was prepared in standard fashion by soaking in antibacterial solution and placed on the skin graft carrier (Zimmer Dermacarrier, Zimmer Surgical Inc., Dover, OH). The tissue matrix was passed through the skin graft mesher (Zimmer Surgical Inc.) with a pre-installed roller blade size of 1.5:1 [Figure 2]. Once meshed, it measures 9 cm × 17 cm = 153 cm2, an increase in surface area of 50% [Figure 3]. The meshed alloderm is then attached to the chest wall and pectoralis major muscle with PDS 2-0 sutures (Ethicon Inc.), with a tissue expander placed underneath [Figure 4]. 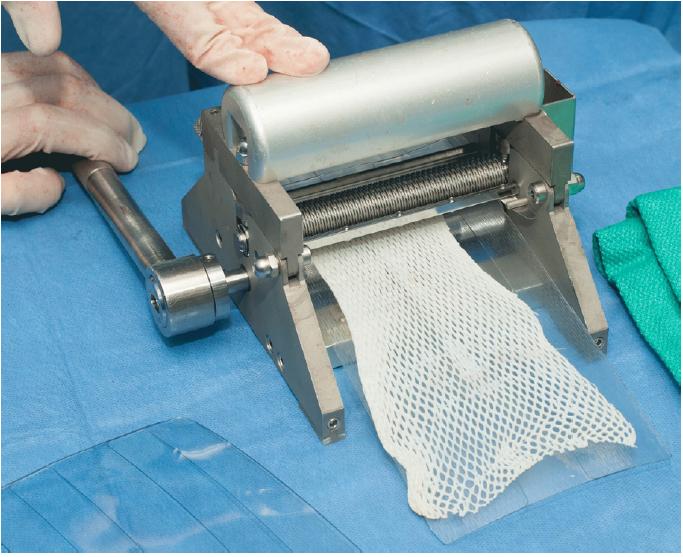 Figure 2. AlloDerm (thin-type) is processed by the skin graft mesher 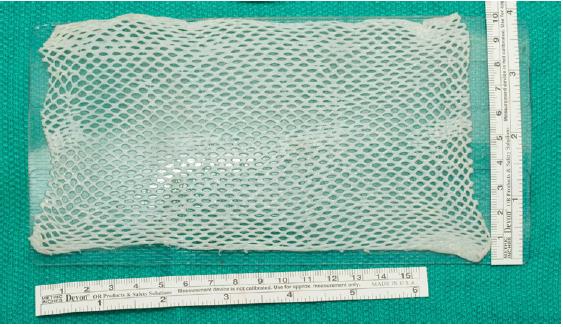 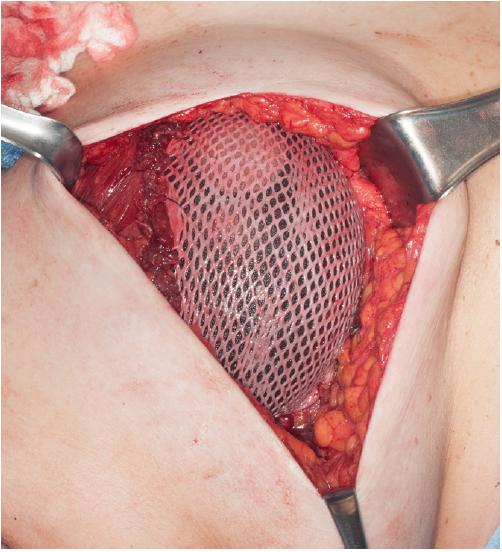 Figure 4. Meshed alloderm is sutured to the pectoralis muscle and the chest wall

The most widely used technique for breast reconstruction employs tissue expanders and implants.[6] When first described, the expander or implant was inserted under the pectoralis major muscle to obtain complete sub-muscular coverage. If not feasible, the serratus anterior or rectus muscles would be raise to cover the lower pole of the breast. However, using the serratus anterior muscle would often times be associated with donor site morbidity. This includes shoulder pain, weakness and limitation of shoulder elevation due to serratus anterior palsy, in addition to other problems such as wound dehiscence, infection and hematoma formation at donor site closure.[7] Therefore, the dual-plane technique was developed, where the expander or implant was covered by the pectoralis major superiorly and by the dermis of the breast inferiorly. This eliminated donor site morbidity, but was associated with the pectoralis major migrating superiorly and causing window shading. In addition, as the inferior pole is covered solely by a thin skin flap, there is a risk of implant migration, poor visibility, palpability, and excessive ptosis. Window shading has since been corrected with marionette sutures to anchor the pectoralis major, while the development of alloderm helped with the problem of lower pole coverage.[2]

Meshing of alloderm is an innovative idea that can decrease the costs of its use. A recent study looked at the effects of fenestrating ADMs.[8] Their results showed that with fenestrations, the incidence of capsular contractures, infections and seroma formation were all decreased. Further, they described improved intra-operative fill volumes and expansion rate, as well as a decreased number of post-operative expansions.[8] While not identical in technique to meshing alloderm, it does show potential further benefits for meshing alloderm. By employing a similar technique used with split thickness skin grafts, we were able to take a standard 6 cm × 17 cm sheet of alloderm and increase its area from 102 cm2 to 153 cm2, an increase of 50%. In our experience, with an increase of 50% more alloderm available for use, this amounted to savings of approximately 50% per sheet of alloderm. Intraoperative findings during the second stage (expander to implant exchange) show that the meshed alloderm integrates as well if not better than the standard unmeshed alloderm. This may be because the overall three-dimensional surface area of the ADM is increased, allowing for better integration and neovascularization. Further correlation with histological analysis and clinical follow up to compare meshed versus un-meshed ADM is pending.