Aim: The primary author previously described his technique for periareolar closure in mastopexy using a pinwheel interlocking purse string with absorbable barbed suture and now reports the results of a retrospective photometric analysis comparing this technique with the same closure using Gortex® suture. This study is designed to compare the degree of areolar widening and safety profile of using absorbable barbed sutures for periareolar closure versus permanent smooth suture.

Methods: A retrospective chart review was conducted of all patients whose periareolar closures were performed using an interlocking purse-string technique over a 10-year period. Only patients undergoing circumvertical mastopexy were included. All had photometric evaluation and follow-up performed within 6-24 months.

Results: In total, 20 patients (40 areolas), which were closed with absorbable barbed suture, were analyzed photometrically. In this suture group, areola size increased a mean of 4.9% from baseline, and no complications (0%) were observed. This compared favorably with previously reported complication rates using permanent sutures and with a series of cases presented herein in which permanent smooth suture was used for purse string closure. The degree to which absorbable barbed suture controls areolar spread was shown to be significantly better than those where permanent smooth purse string techniques were employed.

According to the American Society of Plastic Surgeons, approximately 90,000 breast lifts were performed in the United States in 2013.[1] Mastopexy closure techniques have evolved over the past decade to help limit scarring associated with the classic inverted-T technique, replacing it with Concentric (Donut) and circumvertical techniques with or without short horizontal scars.[2-4] Even the concept of a simple purse-string periareolar closure, first described by Benelli,[2] evolved to the more popular interlocking (pinwheel) purse-string technique, as described by Hammond et al.,[5] using permanent expanded polytetrafluoroethylene (ePTFE, GORETEX®, W. L. Gore, Phoenix, AZ) suture for the deep layer. Franco et al.[6] reaffirmed the safety and reliability of the interlocking purse-string periareolar closure using ePTFE, by evaluating a retrospective series of 50 patients who underwent augmentation mastopexy. They found a complication rate of 6% specifically associated with infected ePTFE requiring removal of this permanent foreign body. Other complications that we encountered with ePTFE in our work prior to 2008 included wound dehiscence, knot extrusion, suture palpability, fat necrosis, and areolar widening. Non-interlocking pursestring techniques using ePTFE prior to 2008 were occasionally complicated by herniation of the areola secondary to a “cerclage” effect with spread of the areola beyond the boundaries of the initial suture placement.

In 2008, with the introduction of absorbable barbed suture (Quill™ Knotless Tissue Closure Device, Surgical Specialties Corporation®, Wyomissing, PA) we began using this new suture technology instead of ePTFE sutures for interlocking purse-string periareolar closure in our mastopexy, reduction mammoplasty, and augmentation mastopexy patient population.[7] Demonstration of this technique can be found at https://www.youtube.com/watch?v=IHxKsC4S85c. We observed a satisfactory preservation of areolar size post op and had no knotrelated infections. No herniated or distorted areolas were noted and no palpability or visibility of the suture was encountered. In addition, the long-term potential nidus for infection was eliminated. Previous studies have confirmed the cost effectiveness, safety and efficacy of using barbed suture.[8,9]

We published our work with absorbable bidirectional barbed suture for wound closure in abdominoplasty and body contouring procedures.[10,11] Shortly after, we expanded its application to include our mastopexy closures. We undertook a formal chart review to test our hypothesis that the absorbable barbed suture, when applied using an interlocking purse-string technique, was effective in limiting the spread of the areola size post mastopexy. Swanson[12] found photometric analysis of outcomes to be effective in assessing outcomes of breast surgery and we decided to apply similar assessment tools to our study population.

We conducted a 10-year retrospective chart review of consecutive patients (71 patients/142 breasts) who underwent mastopexy, either alone or in conjunction with other aesthetic breast and body procedures. From 2003 to 2008, all mastopexy closures (30 patients/60 breasts) at our center were performed using permanent ePTFE sutures for the subdermal layer and smooth absorbable Monocryl suture for deep dermal and subcuticular closure. From 2008 to 2013, mastopexy closures (41 patients/82 breasts) were performed exclusively with absorbable barbed suture. We used bidirectional PDO™ (polydioxanone) for the deep layer and Monoderm™ (PGA-PCL) for subcuticular layer. Monoderm™ retains 62% of its original tensile strength at 7 days, and 27% at 14 days, with absorption essentially complete within 90-120 days, while the longer-term PDO™ retains 50-80% of its original tensile strength at 4 weeks, with absorption essentially complete within 180 days.[13,14]

We selected a patient population specifically to limit variables related to skin tension forces. We, therefore, excluded reduction mammoplasty and augmentation mastopexy and focused solely on patients undergoing mastopexy alone. The study population was further limited to patients with postoperative photographs between 6 months and 24 months after the mastopexy to minimize variables associated with aging.

The final analysis was performed on 20 eligible patients (40 breasts) in whom closures were performed using absorbable barbed suture exclusively. Since no previous reports of areolar spread rates have been published, for comparison purposes, we assessed 12 eligible patients (24 breasts) in whom mastopexy closures were performed with ePTFE/Monocryl. The primary author performed all surgeries using the same circumvertical technique[4] at the same surgical center. Diagrammatic representation of interlocking purse string technique is demonstrated in [Figure 1]. Intraoperative photos are shown below depicting the periareolar wound, prior to suture deployment [Figure 2], after suture placement [Figure 3], and after final closure [Figure 4]. 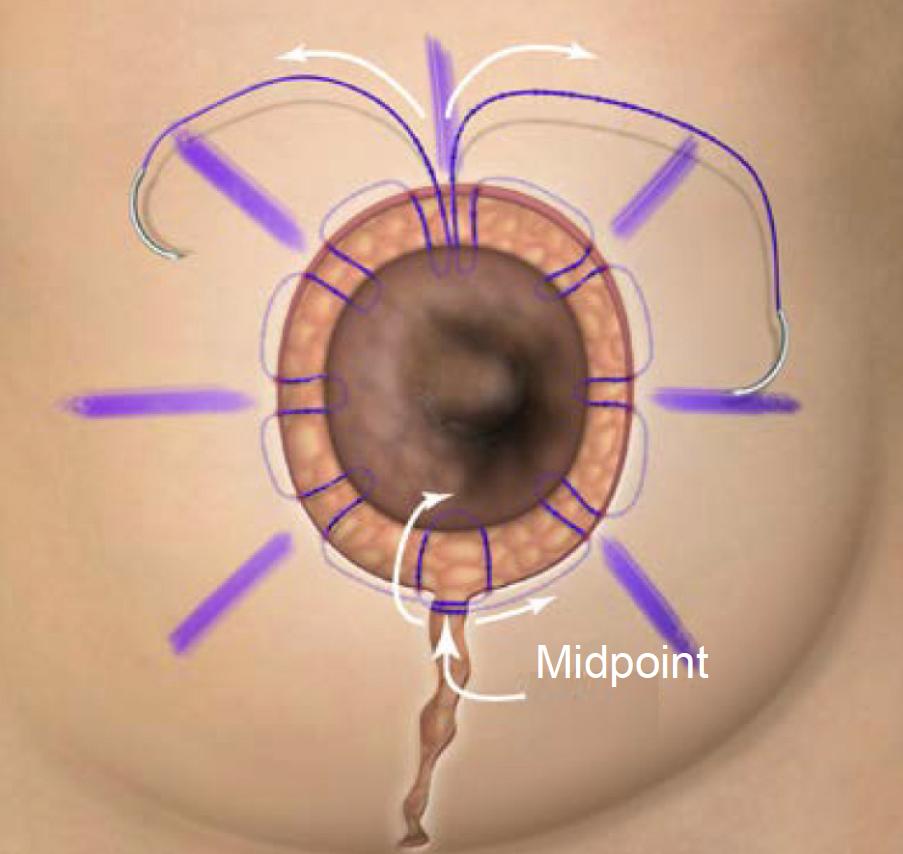 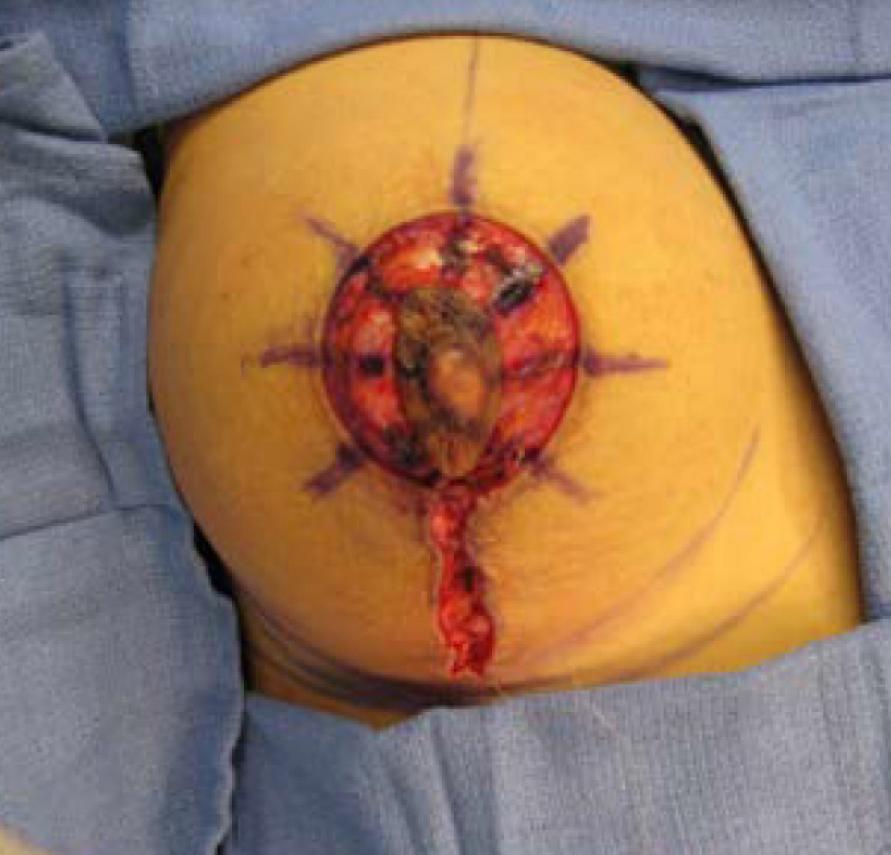 Figure 2. The periareolar wound prior to suture deployment is marked in divided quadrants 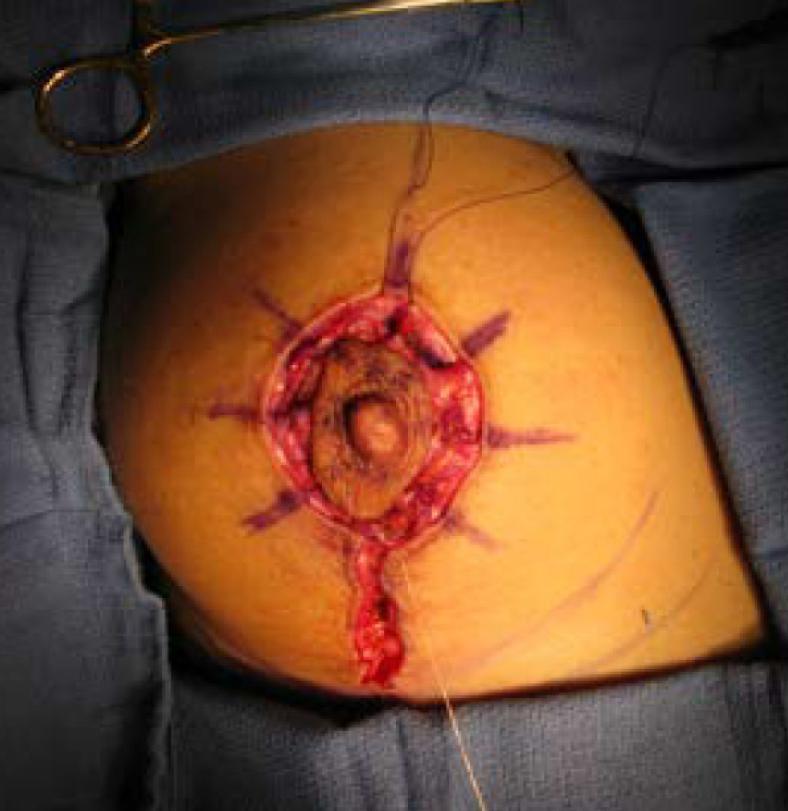 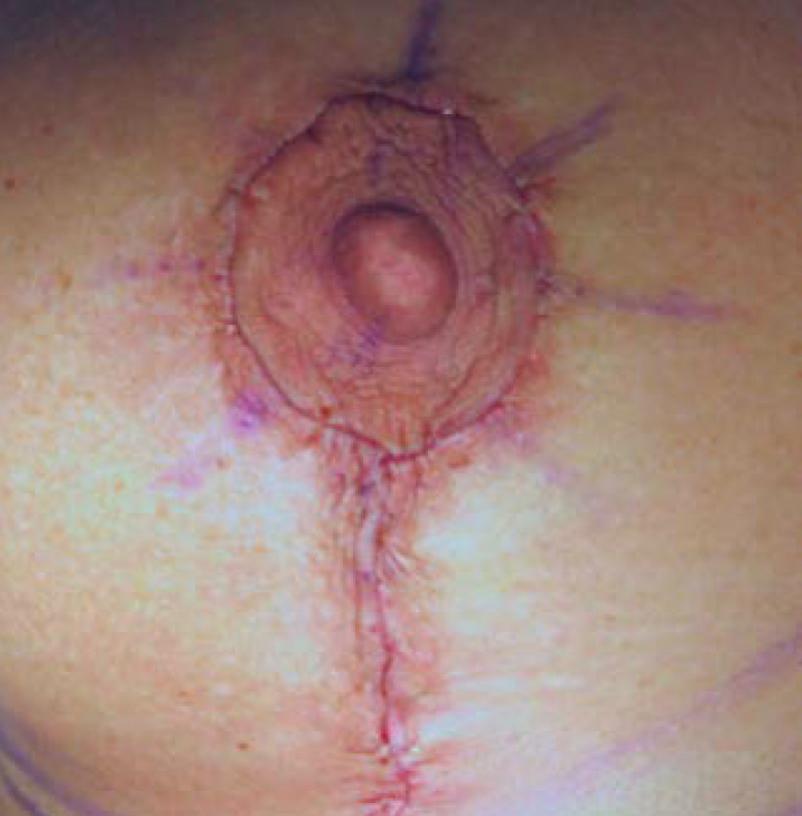 The 32 patients assessed had a mean age of 41.6 years, and mean BMI of 23.5 kg/m2. Patients whose mastopexy incisions were closed with absorbable barbed sutures were similar in both age and mean BMI to those closed with permanent sutures [Table 1]. The two groups were also similar in the incidence of hypertension, diabetes and in the percentage that were current smokers. Many (12/32, 37.5%) had a history of other relevant medical conditions. More subjects in the barbed suture closure group had undergone previous breast surgeries: 6/20, 30.0% vs. 2/12, 16.7% in the ePTFE group.

*Some patients had multiple additional procedures. †Patients in the barbed suture group had power-assisted lipoplasty of the hips, abdomen and thighs (1) and bilateral anterior axillary liposuction (1). The patient in the smooth suture group had liposuction of the neck

Using absorbable barbed suture, areola size increased a mean of 0.20 ± 0.70 cm from a baseline mean of 4.11 ± 0.24 cm (P = 0.236), representing a 4.9% increase from baseline. The increase in areola size was a mean of 0.29 ± 0.16 cm less for patients in the absorbable barbed suture group; however, the difference between groups in the change from baseline areola size did not reach statistical significance (P = 0.092, based on ANOVA).

We believe the unique property of the barbed suture allows redistribution of tension forces throughout the entire length of the closure, and is particularly effective for round closures under circumferential tension. Smooth sutures, whether permanent or absorbable, allow tissues to slide along the length of the suture and “bunch up” similar to the way a shower curtain slides unevenly along its rod. Furthermore, we have found that long-acting absorbable sutures provide enough strength to allow quality tension-free healing to occur without leaving permanent foreign body material beneath thin areolar tissues. Absorbable suture eliminates long-term suture palpability, both at the knot and the circumferential portion of the permanent suture.

We also strongly believe that the tension relieving nature of the interlocking purse-string technique is further enhanced by the tension redistribution noted with barbed sutures. The combination of the novel interlocking technique and the improved absorbable barbed suture technology acts in synergy to reduce wound tension and minimize complications.

Various complications in procedures involving periareolar closures have been reported in the literature, most typically in association with breast reduction or augmentation/mastopexy surgeries.[16-21] Delayed wound healing, wound dehiscence, hematoma or seroma formation, wound infection, fat necrosis, stitch abscess, diminished nipple sensation and scarring have been reported but limited data are available for mastopexy alone. Franco’s review[6] using interlocking ePTFE reports similar complications. Since the wound healing problems listed in the permanent suture cohort in our review occurred in patients with systemic comorbidities, this could have played a role in the healing process. In addition, the retrospective nature of this review and the small, uneven sample size do not allow us to make statistically significant comparisons between groups, but the limited sample did show that areolar size was well preserved and no complications were seen in this particular group when closing the periareolar tissues exclusively with absorbable barbed suture.

Although complication rates for mastopexy are well reported in our literature, the effectiveness of controlling the degree of areolar spread has not. Many authors have made references to this outcome, but the incidence rates in a population of mastopexy patients without augmentation or volume reduction have not been previously reported. For this reason, we included a small sample of our own patients to serve as a comparative cohort in assessing post op areolar widening, an important parameter to demonstrate efficacy of periareolar closure techniques.

Certainly, some limitations of this study are inherent to the nonrandomized retrospective study design. A prospective, randomized multicenter trial with a larger sample size would be necessary to validate our observational findings. In addition, since only barbed suture was used we could not assess whether smooth absorbable suture might perform as well at lower cost.

Although the mean follow-up period was similar between groups, the range was wide varying from 6 to 24 months. It would have been preferable if all follow-up photographs had been recorded within an even narrower window to better restrict changes in breast size that may otherwise been due to weight gain or loss or other variables. It is possible that direct postoperative areolar measurements with calipers would have been preferable to photometric measurements, although both methods have a degree of inherent inaccuracy. We are also aware that due to the contractile properties of the nipple areolar complex, areolar size may vary based on environmental conditions, room temperature, stress and other unforeseen stimulatory factors.

In our surgical practice, the use of absorbable barbed suture for circumareolar closure was found to be effective in limiting post op areolar widening and was without complications. We present our data as a comparative photometric and clinical analysis for surgeons considering making the “leap of faith” and performing periareolar closure with absorbable barbed suture alone.

The tension reducing benefits of the interlocking purse-string technique combined with absorbable barbed suture technology yields predictable areolar size outcomes and minimizes suture related complications in mastopexy. As plastic surgeons continue to evolve and explore new suture technologies and techniques, this study will support the safety and efficacy of doing so exclusively with absorbable barbed suture. 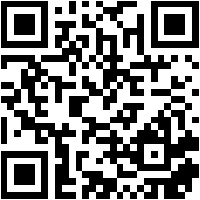