Palatal cysts are always confusing by defining their exact nomenclature or conclusive diagnosis. One of these presentations is globulomaxillary cyst which requires to be categorized under appropriate head for the management point of view. Though this entity appears to be of odontogenic in origin but because of its anatomical relation and histo-pathological background this is placed in non odontogenic group. Though the mechanism of its formation remains the same but this cyst cannot be mixed up with nasopalatine cyst as per their location. Globulomaxillary cyst appears as inverted pear shaped radiolucency in all radiological procedures. This remains asymptomatic for a long time and rarely gets infected. We present a 29-year-old male who reported with one year history of asymptomatic right side hard palate swelling. He was subsequently diagnosed as globulomaxillary cyst with the help of radiological modalities like computerized tomography and magnetic resonance imaging. This article will highlight mainly the clinical and radiological features of these cysts with particular reference to globulomaxillary cyst which is our presenting case.

Cysts in the oral cavity can either be of soft tissue origin or from within the bone. Non-odontogenic hard palate cysts arise from the tissues which do not participate in tooth formation. There are many palatal cysts and their variants are encountered during the course of embryonic palate development. One of the cysts is globulomaxillary cyst and this terminology had a lot of dispute to be used. It was earlier thought to be of embryonic origin because of entrapment of the ectoderm but now this hypothesis is no longer considered. These have been considered as fissural entrapment of epithelium rather than embryonic ectoderm.[1] There are many other cysts reported in the palate region and have been categorized as per the origin and anatomical location.

A 29-year-old male reported to otolaryngology out-patient department with the swelling in the hard palate of one year duration [Figure 1]. 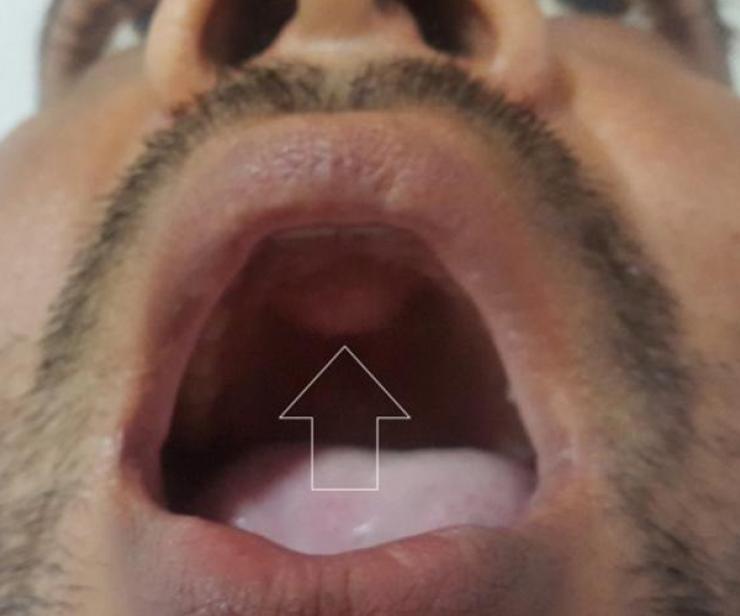 This was asymptomatic in the beginning but subsequently developed some roughness along with slight local tenderness. There was no history of trauma or fever. On examination there was slight protuberance over the right side of the hard palate. This was of slight dull pink in coloration. There was no ulceration seen locally over the swelling. There was no divergence of roots of central incisors. The adjoining teeth reacted normally to the electric vitalometer test and to temperature stimulation. All the biochemical parameters were within normal limits. The further detailed initial work up confirmed the swelling as that of the non odontogenic origin. The patient was referred for evaluation of the tumor. The oral occlusal film had confirmed the swelling of non odontogenic origin. The patient was subjected to plain as well as contrast enhanced computerized tomography (CT) scanning of the face and neck region. The findings revealed a radiolucent pear shaped non enhancing unilocular, inverted pear shaped cystic lesion 2.5 cm × 3.5 cm in size between the lateral incisor and canine on right side [Figure 2].

There was also thinning out of the bony outline [Figure 3].

Patient was also subjected to magnetic resonance imaging (MRI) scanning of face and neck region. The mass was of fluid density which was hypointense in T1W and hyperintense in T2W images. There were no associated findings [Figure 4].

Fine needle aspiration cytology has shown some seropurulent secretion and confirmed as non odontogenic cyst coming in the category of globulomaxillary cyst. The histo-pathological images were not available. The patient has been planned for enucleation of the cyst as this being the most preferred method of treatment of these entities.

Hard palate forms the floor of the nostrils and roof of the oral cavity. This is thicker in front and thin in its posterior aspect. Globulomaxillary cysts are still disputable in their origin but majority of studies have shown these as not of embryonic origin.[2] 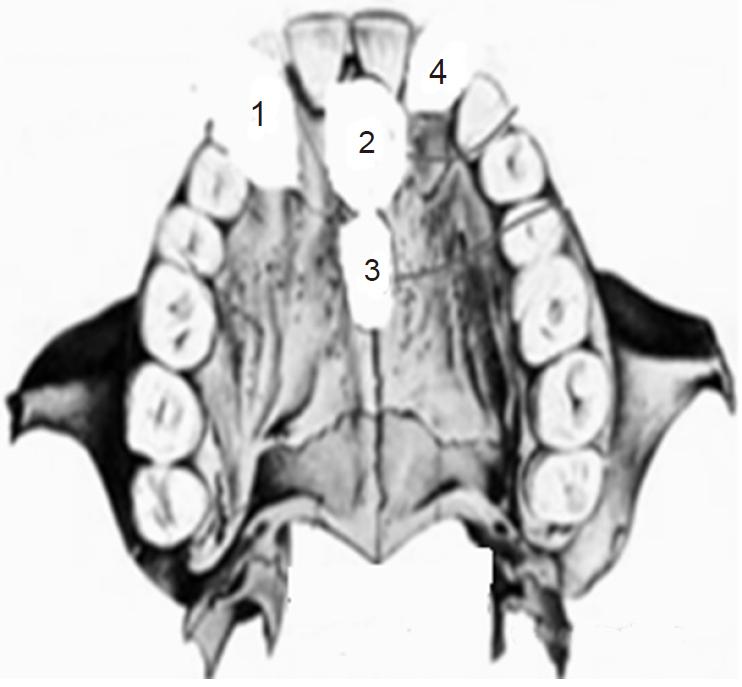 Globulomaxillary cysts arise at the junction between maxilla and premaxilla. There are three main subtypes of non-odontogenic fissural cysts described as nasoalveolar, nasopalatine and median palatal.[4] These are usually discovered during routine clinical or radiographic examinations. The average duration of these cysts vary from one week to two years. The occlusal images are the first to lead in radiological investigations. In plain X-ray this may present as radiolucent region. These are usually asymptomatic and also found as incidental findings in CT examinations. Their pathogenesis though controversial but non disintegrated epithelium in the fissural sites remains the most accepted hypothesis. These are usually painless and rarely get infected and that is the reason for their delayed diagnosis.[5] These are oval or round and hypodense on CT examination and do not enhance in post contrast studies. Bone resorption is often present because of their expansile nature but the cortical break is very rare. The classical egg shell type of margins is present as was also seen in our case. Hisatomi et al.[6] has described the classical features of these cysts in MRI. MRI show intermediate signal in T1W and hyper intensity on T2W images. There is no post-gadolinium enhancement seen in T1W fat saturated sequences. Histologically these present as a cystic cavity covered by epithelium that contain stratified squamous cells with some respiratory epithelial components. The wall is composed of thick dense collagenous fibrous tissues. Median palatine cysts are easy to diagnose on CT and MRI modalities as their locations are self explanatory.[7,8] There are cases where these entities have been managed with non-surgical endodontic treatment[9] but the gold standard is complete surgical excision via intraoral approach.[10] Sometimes the part of nasal mucosa has to be sacrificed as the lesion is close to the floor of the nose.[11]

In conclusion, globulomaxillary cysts draw attention only after these are diagnosed. These cysts remain undiagnosed for a long period because of their asymptomatic background. CT and MRI modalities have brought revolution in diagnosing these entities while performed for some other reasons. These should be classified in their proper category before treating them.

The approval for publishing this case and paper had been obtained from the institute. 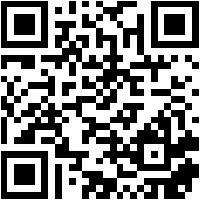