Angioleiomyoma: a rare diagnosis of a painful subcutaneous nodule in the hand

Angioleiomyoma of the hand is a rare differential diagnosis of painful soft tissue nodule in the extremity. It arises from smooth muscle of the blood vessels and the most common symptom is pain. Imaging with magnetic resonance imaging shows characteristic features like a hypodense peripheral capsule with linear or branching internal hyperdensities on T2-weighted images, and post-contrast diffuse homogenous enhancement with a vessel leading up to the lesion. Histopathological examination shows well circumscribed fascicles of mature smooth muscle cells surrounding vascular lumina, lined by normal appearing endothelium without elastic lamina present. These cells stain positive for smooth muscle actin, desmin, vimentin, type IV collagen and S100, but stain negative for HMB-45 and ER. Angioleiomyoma is amenable for surgical resection. We report a case of painful subcutaneous nodule of hand, with radiological and histopathological findings suggestive of angioleiomyoma. We outline the clinical, radiological and histopathological features of this rare diagnosis for painful nodule of extremity.

Angioleiomyoma is a unique form of soft tissue tumor, which arises from the smooth muscle of blood vessels.[1] This tumor can appear in different parts of the body, and the most common presenting complaint is pain. Since this lesion is a rare occurrence and the list of differential diagnoses for painful mobile subcutaneous mass is extensive, a case report and literature review of angioleiomyoma is presented.

A 36-year-old man presented with a 2-year history of a slow-growing, mildly painful mass in the palmar aspect of the thenar eminence of the right hand. There was no history of trauma. On examination, a 3 cm × 2 cm firm, mobile mass was palpated on the thenar eminence of the right hand. The lesion did not extend to the underlying bone and tendon. The overlying skin could be easily pinched from the lesion and did not show ulceration or discoloration. Temperature and sensation of the overlying skin was normal. Thus, a clinical diagnosis of soft tissue tumor was made [Figure 1].

Figure 1. Preoperative picture. Note the bulge over the thenar eminence

Magnetic resonance imaging (MRI) of the hand revealed a well-defined 2.5 cm × 2.8 cm lesion in the first web space of the right hand infiltrating adjacent musculature. The lesion was heterogeneously hyperdense on T2, and isodense on T1. Prominent feeders were seen from arterial branches of the palmar arch. No early draining veins were seen [Figure 2]. 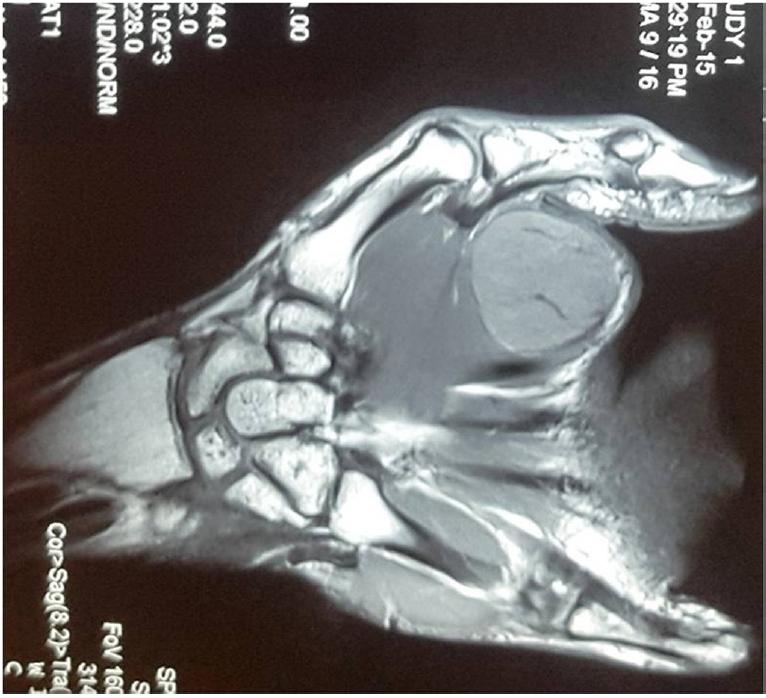 Excision of the lesion was performed under brachial block. A single 2 cm in diameter spherical mass was identified
[Figure 3]. The outer surface was smooth and whitish in color. It was well encapsulated [Figure 4]. Histopathology revealed a well-circumscribed tumor, composed of multiple thick-walled blood vessels with thickened smooth muscle coating. The smooth muscles were arranged in form of interlacing fascicles. Neither mitosis nor necrosis was seen. Tumor cells were positive for smooth muscle actin and desmin, but they were negative for Bcl-2 and CD34. The features were consistent with angioleiomyoma or vascular leiomyoma [Figure 5]. 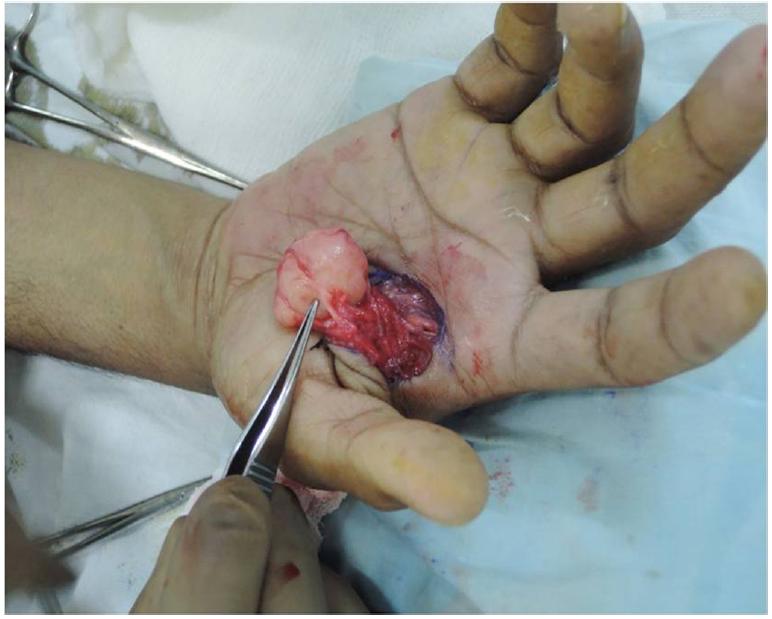 Figure 3. Intraoperative view showing a blood vessel from the palmar arch in close proximity to the tumor

The patient was kept on regular follow-up. Six months following surgery, there are no signs of recurrence.

Angioleiomyomas are rare benign subcutaneous or deep dermal tumors of smooth muscle and vessels. They are also called angiomyomas or vascular leiomyomas. They are common among females in 30-60 years of age.

Angioleiomyomas present as slow growing painful solitary nodules of extremities.[2-5] Other rare sites have also been reported in the literature including the labia majora, nipple, hard palate,[6] pinna, and sella.[7] The most common presenting symptom is pain, found in up to 60% of cases.[8] This is attributed to stretching of nerves in tumor or capsule, or release of mediators from mast cells.

Differential diagnoses to be considered in cases of painful nodules in extremities are glomus tumor, traumatic neuroma, eccrine spiradenoma and angiolipoma.[1,9] All are treated by surgical excision and they do not reoccur. The gross appearance is firm and spherical nodule that is grayish white to brown in color, and usually 2 cm or less in diameter.

MRI features characteristic to angiomyomas include a hypodense peripheral capsule with linear or branching internal hyperdensities on T2-weighted images, and postcontrast diffuse homogenous enhancement, with a vessel leading up to the lesion in the majority of cases. These features were also seen in our case.

They may have foci of cartilaginous or adipose metaplasia. Rarely, they might have calcification.[11] Hemorrhage, necrosis, mitotic activity, vasculitis or fibromuscular dysplasia are not encountered.

To conclude, angioleiomyoma of the hand is a rare differential diagnosis of a painful subcutaneous nodule in the extremities and has to be kept in mind during such clinical presentation. 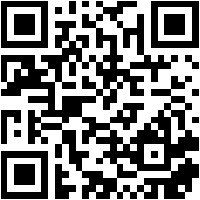