Methods: Ultrasound treatments for 5 males and 5 females in a supine position, ages 37-67 years, were applied at 20 KHz and 3.0 W/cm2 in modulated emission. Whole abdomen was treated by an ultrasound handpiece for 30 min followed by a 6-min lymphatic drainage. Waist circumferences at the level of the umbilicus and body weight were measured before and immediately after treatment. Blood lipid profiles including total cholesterol, low-density lipoprotein, high-density lipoprotein, triglyceride (TG), nonesterified fatty acid (NEFA) and lipoprotein-a were measured at baseline, every 10 min during treatment, and 15, 30, 45, 60, 75, and 90 min after treatment completion.

Results: NEFA showed statistically higher values after 10 min following treatment initiation. Subsequent values remained high despite some fluctuation, reaching a maximum at 90 min. In contrast, TG gradually decreased in concentration until the last measurement, especially for the first 30 min, with statistically significant reduction. Changes in other lipid profiles and lipoprotein-a were not significant.

Conclusion: Changes in NEFA concentration were significant following ultrasound treatment, and suggest that metabolism of TGs stored within the adipocytes occurred immediately after treatment initiation.

Nonsurgical body contouring devices, including cryolipolysis, low-level laser therapy, radiofrequency instruments, and external ultrasound devices, are widely used noninvasive procedures for body contouring and fat reduction. In a clinical environment, the most effective treatments for noninvasive fat reduction involve ultrasound, using either focused or nonfocused waves depending on how ultrasonic energy is delivered to the tissue.[1-4]

The primary objective of this study was to document blood lipid profile changes following nonfocused ultrasound treatments for body contouring, elucidating clinical and biochemical effects of these devices on adipose tissue.

The MC1 device consists of ultrasound and drainage handpieces. The ultrasound handpiece delivers a dualinclined nonfocused beam of 20 to 60 KHz on a 1 MHz carrier wave, capable of creating a weakly focused ultrasound field within subcutaneous fat tissue at the point where the beams overlap [Figure 1]. 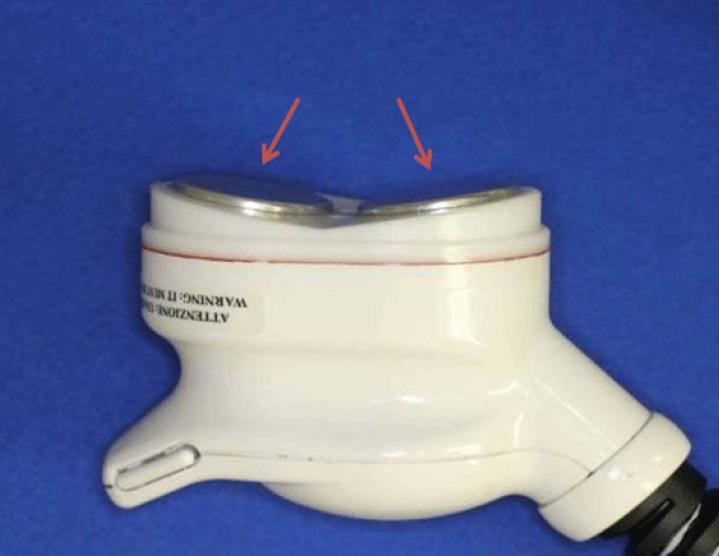 Figure 1. MC1 device. The MC1 device has an ultrasound and a zonal massage handpiece. The ultrasound handpiece with angled, nonfocused emitters deliver 1 MHz ultrasound. In modulated emission mode, the nonfocused beams create a slightly focused ultrasound field within the tissue at the point where the beams overlap

The draining handpiece is used during both pre- and post-treatments. The former is to open the main lymph nodes to facilitate the flow of excess fluids and facilitate their removal. The latter promotes immediate lymphatic drainage of treated areas, stimulating metabolic processes that lead to natural elimination of the fat waste.

Five males and five females (37-67 years old) in supine position were exposed to ultrasound at 20 KHz and 3.0 W/cm2 in modulated emission. Whole abdomens were treated by continuously moving an ultrasound handpiece for 30 min, followed by a 6-min lymphatic drainage.

Waist circumferences at the level of the umbilicus and body weight were measured before and immediately after treatment. Blood lipid profiles including total cholesterol, low-density lipoprotein, high-density lipoprotein (HDL), TG, nonesterified fatty acid (NEFA) and lipoprotein-a were analyzed at baseline, every 10 min during treatment, and 15, 30, 45, 60, 75, and 90 min after completion of treatment.

A paired t-test was performed for each group to determine the presence or absence of significant differences between baseline and post-treatment for weight, body mass index (BMI), and circumference reduction. Subjects provided written informed consent prior to participation in the study.

Circumference of the abdomen was significantly reduced (P < 0.003) from baseline measurements following treatment [Figure 2], whereas weight and BMI showed no statistically significant differences before and after treatment [Table 1].

The body weight, body mass index (BMI), and somatic fat rate showed slight decreases from the baseline, but they were statistically insignificant 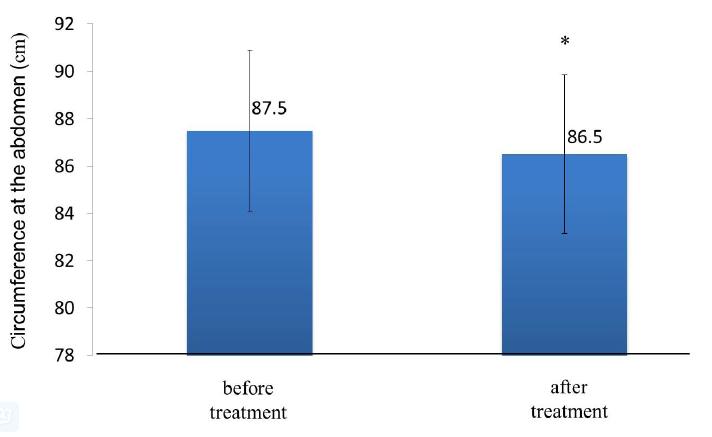 Figure 2. Summary of abdominal circumference. The circumference at the abdomen was significantly reduced (*P < 0.003) from baseline measurements

While NEFA showed noticeable changes in most patients [Figure 3], other parameters did not predictably change. NEFA and TG were subsequently examined in greater detail since they appeared to have more pivotal roles in fat reduction for body contouring. 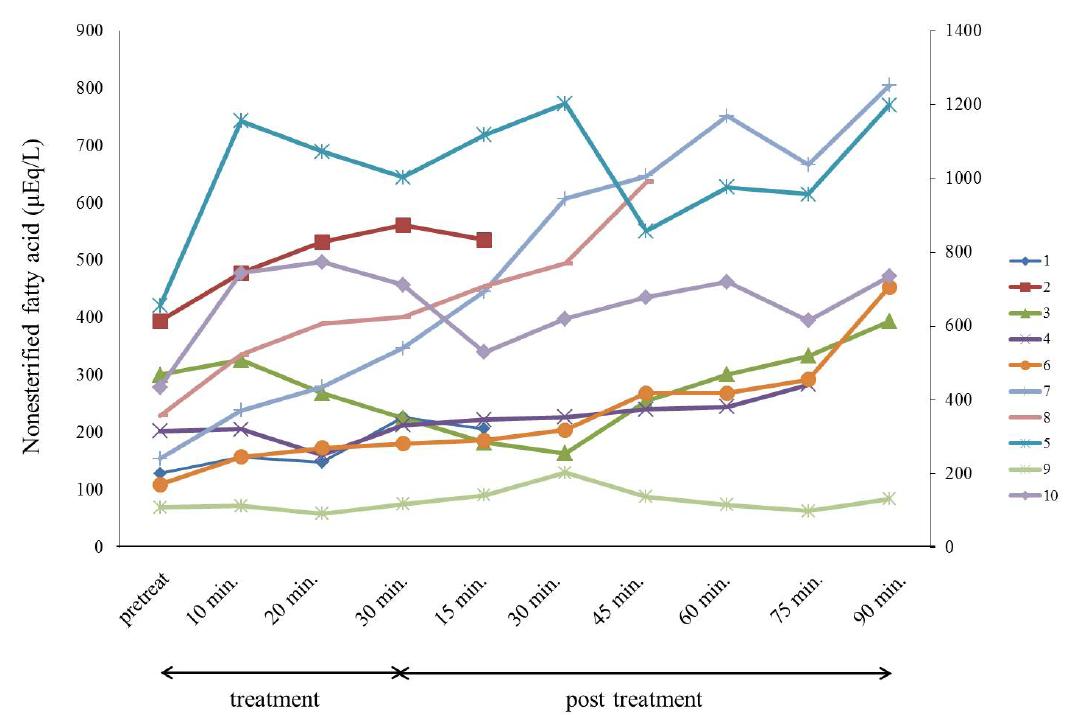 Figure 3. Blood NEFA changes in 10 subjects. Most subjects displayed increased blood NEFA levels from the early phase and had higher values at termination of the experiments. NEFA: nonesterifield fatty acid

Although 2 subjects exhibited transient decreases in blood NEFA, the remaining 8 subjects demonstrated higher values at the 90 min drawing than at baseline, and concentrations were significantly higher (P < 0.05) throughout the periods of measurement for this cohort [Figure 4]. 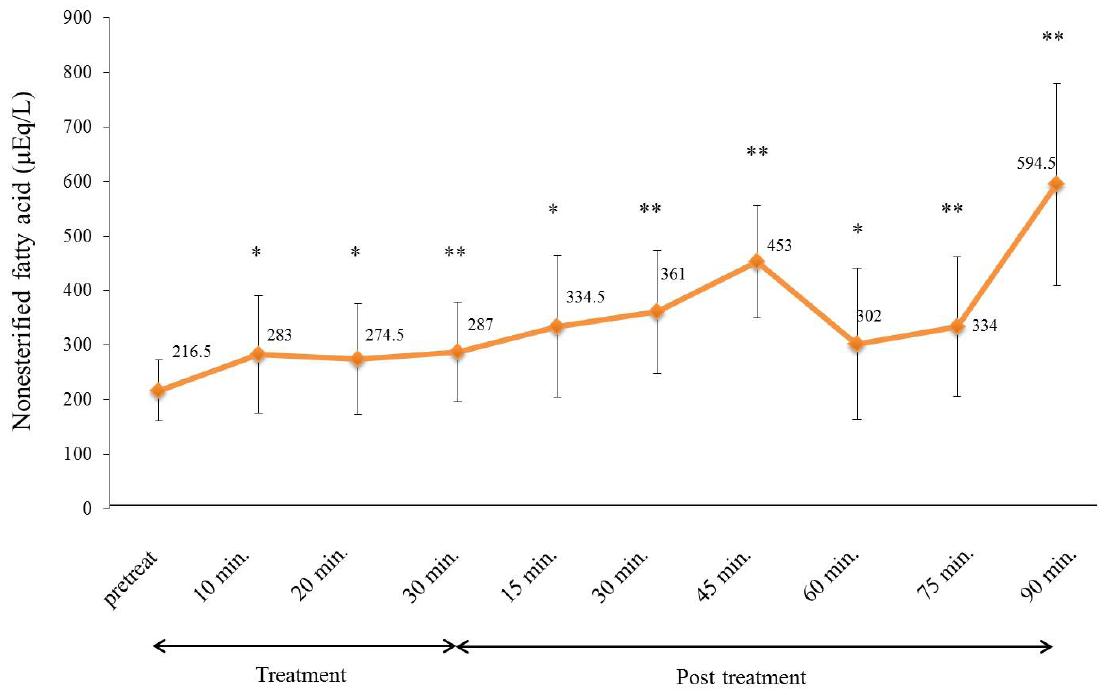 TG conversely showed significantly lower values (P < 0.02) at 10, 20, and 30 min. A gradual decline persisted, but was not statistically significant [Figure 5]. 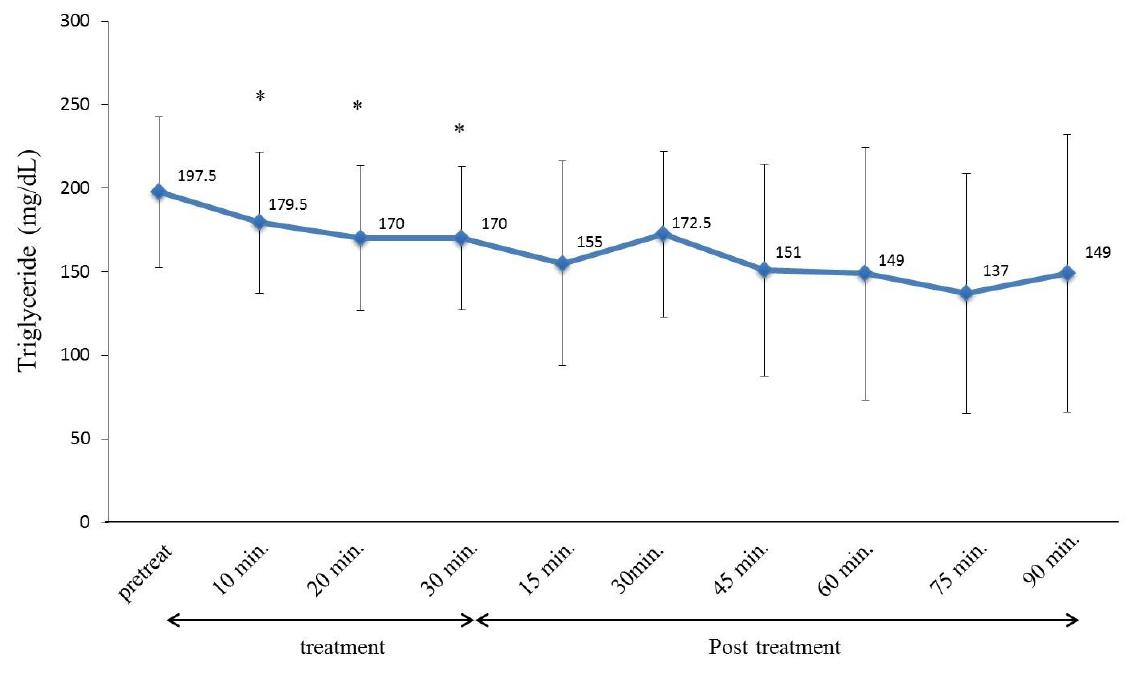 Figure 5. Summary of mean blood TG levels. TG levels up to 30 min from the beginning of the study were significantly lower, and continued to decline thereafter, albeit at a statistically insignificant level (*P < 0.02). TG: triglyceride

The biological mechanisms of liporeductive effects following exposure to high-intensity focused ultrasound (HIFU) has been previously reported by many authors. HIFU, when focused within subcutaneous adipose tissue, raises the regional temperature resulting in coagulative necrosis and instantaneous cell death within the targeted area without damage to the surrounding tissue. Lipids are subsequently released from disrupted adipose tissue, and then cleared by fat metabolic pathways, and the lesion gradually heals.[7,8] Almost all the disrupted adipocytes were resorbed within 18 weeks after treatment, resulting in an overall reduction in local fat volume without evidence of significant increases in plasma lipids.[9] Jewell et al.[10] reported that clinical laboratory tests did not reveal any abnormalities with regard to lipid profiles obtained before HIFU treatment, 1 h after treatment, and at weeks 1, 4, 8, and 12.

Brown et al.[11] exploited another novel technology platform utilizing nonthermal focused ultrasound. The energy from the device was delivered as cavitation followed by mechanical destruction of cells. The term cavitation refers to a range of complex phenomena that involve the creation, oscillation, growth, and collapse of bubbles within a medium to subsequently produce mechanical energy. Little is known about the mechanism of action of nonfocused external ultrasound reducing adipose tissue.

Garcia and Schafer[5] treated pigs with the MCI instrument and concluded that adipose tissue was reduced by ultrasound cavitation inducing focal alterations of the plasma membrane, and lipid leakage into interstitial space and lymphatic vessels without cell necrosis. The blood lipid profiles obtained prior to the treatments and approximately 25 to 30 min post-treatment did not show statistically significant changes in serum cholesterol, TG, or HDL.

Bani et al.[6] concluded that lipid discharge from adipocytes was not accompanied by morphological signs of adipocyte death and disruption, or interstitial inflammation in both ex vivo and in vivo experiments; moreover, ultrasound-induced cavitation caused selective adipose cell reduction without injury to skin, vessels, nerves, or connective tissue.

Although both authors noted TG changes following ultrasonic cavitation, there was no reference to NEFA levelsin blood samples. Plasma NEFA levels significantly increased from baseline at all posttreatment times until 90 min after completion of the treatments.

Elevation of blood NEFA levels suggests that nonfocused ultrasound metabolized TG within fat cells to glycerol and NEFA, followed by release of NEFA into the blood stream through the lymphatic system While lymphatic drainage manipulation might shift NEFA in the lymphatic system to adipose tissue via blood circulation, blood NEFA levels increased before application of lymphatic drainage procedures. Given the half-life of NEFA of 1.7-3.0 min, such shifts of NEFA from lymphatics to the blood circulation is unlikely to maintain the high levels of NEFA until 90 min after drainage. It might be possible for the TG in the blood vessels within the adipose tissue being a source; however, blood vessels in adipose tissues are sparse. It is more likely that the NEFA originated from the abundant TG in the adipocytes within the adipose tissue.

The current study suggests nonfocused ultrasound metabolizes TGs immediately after treatment, but it is unclear whether this involves intra- or extra-cellular spaces of adipocytes. Since there was no control group in the current study, but given the short half-life of NEFA, the significant elevation of blood NEFA must be due to the effects of activated lipolysis within the adipose tissue induced by ultrasound-induced cavitation.

Given the paucity of clinical or biochemical evidence for mechanisms of nonfocused ultrasound reduction of adipose tissue, further study in this field is warranted. 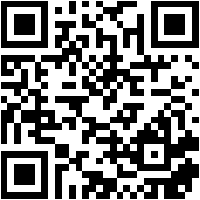