Epidermoid and dermoid cysts of the head and neck region

Epidermoid cysts, dermoid cysts and teratoid cysts are cystic malformations lined with squamous epithelium. They present as soft nodular lesions with a sessile base. Their prevalence is 7% in head and neck patients and 1.6% within the oral cavity. The authors present a case series of 21 patients with dermoid and epidermoid cysts who underwent surgical removal. One year of follow-up was carried out without evidence of recurrence. The removal of these cysts is of great concern as it can cause serious social stigma, aesthetic and functional impairment, dysphagia and dysphonia.

Epidermoid, dermoid and teratoid cysts are cystic malformations lined with squamous epithelium and are classified based on whether they are lined with simple squamous epithelium (epidermoid), or skin adnexa are found in the cystic wall (dermoid), or other tissues, such as a muscle, cartilage and bone are present (teratoid).[1] Epidermoid cysts are rare benign lesions usually located in the oral cavity. They present as soft nodular lesions with sessile base. They are frequently found in ovaries and testicles, and less frequently in the head and neck (7% of cases), or within the oral cavity (1.6%).[1-3] The floor of the mouth is the most commonly affected area, however these cysts can be found in the tongue, lips and buccal mucosa.[4,5] Dermoid and epidermoid cysts of the orbit are described as both superficial and deep formations with most frequently slow intermittent growth. Other than aesthetic effects, during their growth, dermoid and epidermoid cysts can cause disturbances in the eye motility, and in rare cases, also optical nerve compression syndrome.[6,7]

Epidermoid cysts occur more frequently in patients between 15 and 35 years but can be seen in all age groups. These are slow growing asymptomatic masses but once they increase in size, they can cause dysphagia, dysphonia and dyspnea.[1] Prior case reports report patients that presented with pain, speech disorder, or respiratory distress due to epidermoid cyst in the oral cavity, lower lip, or upper lip.[7] Giant epidermoid cysts are rare and they present in the scalp.

Epidermoid cysts are relatively less common in the head and neck region, hence are likely to be misdiagnosed. The aim of this case series is to highlight the presentation of epidermoid and dermoid cysts as a differential diagnosis for head and neck masses, showing various clinical and radiological presentations as well as the surgical outcomes after their removal.

This study included all the patients of dermoid and epidermoid cysts who visited D. Y. Patil Dental College and Hospital, Pune between January 2010 to January 2015. Twenty-one patients (12 females and 9 males) were diagnosed clinically with dermoid/epidermoid cyst and confirmed by fine-needle aspiration cytology. Giant cysts were present on the anterior scalp in 5 patients [Figure 1], on the posterior scalp in the occipital region in 3 patients [Figure 2], on the frontal bone in 3 patients, on the lateral orbital margins in 9 patients [Figure 3], and 1patient had a dermoid cyst intraorally in the upper lip [Figure 4]. The age of the patients ranged 16-78 years. The size ranged from 1.5 cm × 2 cm to 12 cm × 7 cm [Table 1]. Infected cysts were managed with preoperative antibiotics. All cysts were unilocular. No evidence of malignancy was present. None had recurrence after a minimum 1-year follow-up.

Characteristics of patients and the cysts 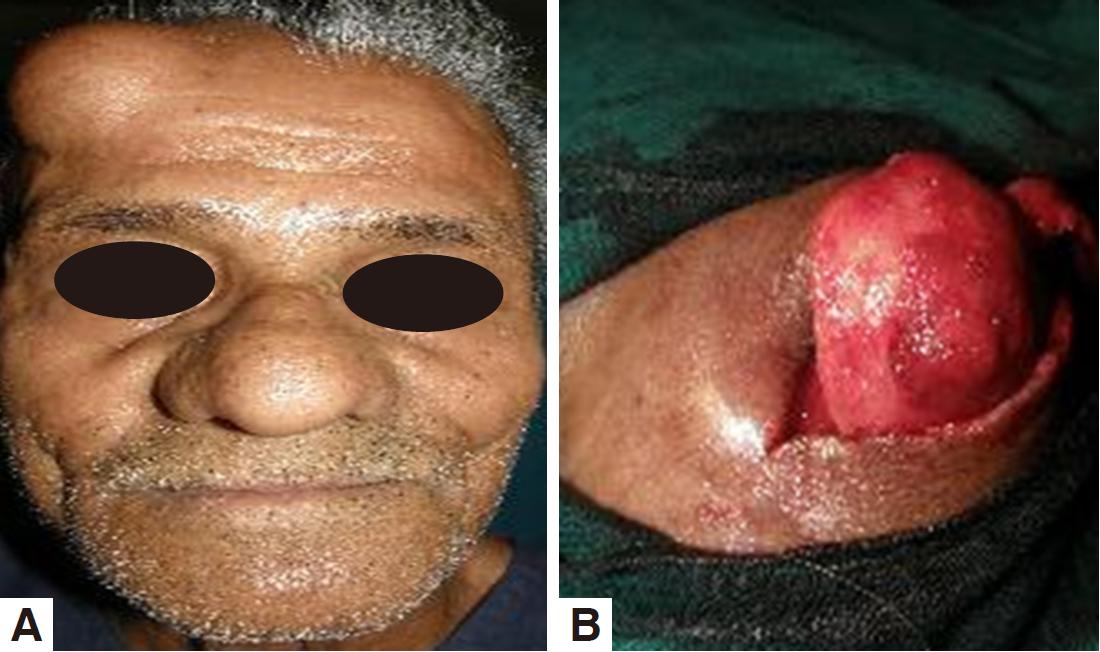 Figure 1. Preoperative (A) and intra-operative (B) view of a dermoid cyst of scalp 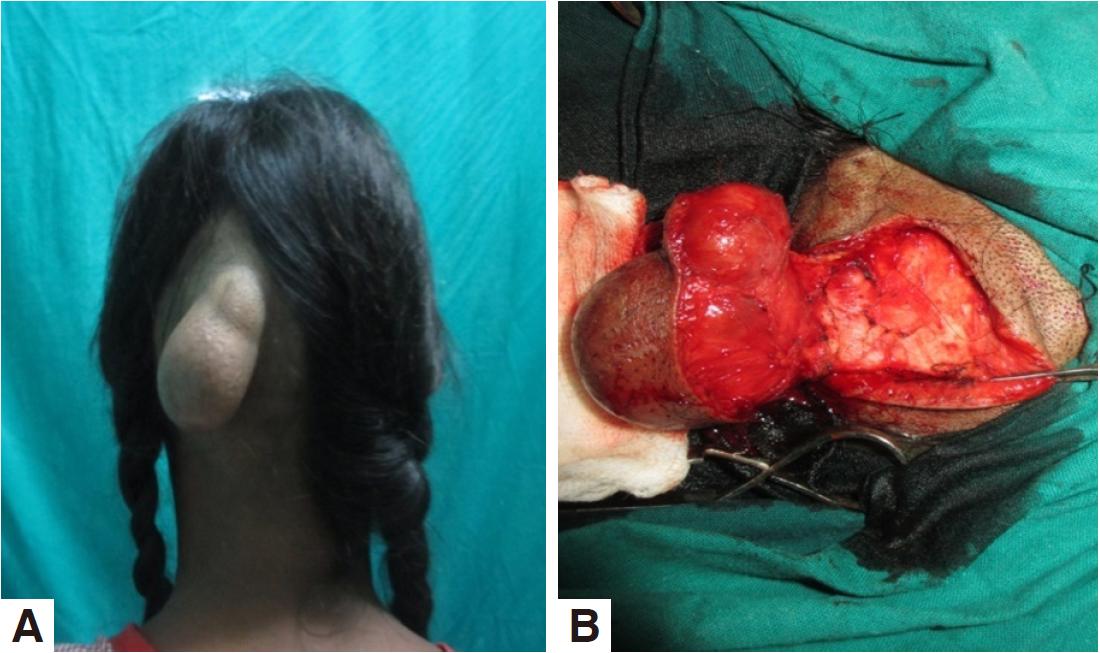 Figure 2. Preoperative (A) and intra-operative (B) view of a dermoid cyst of occiput 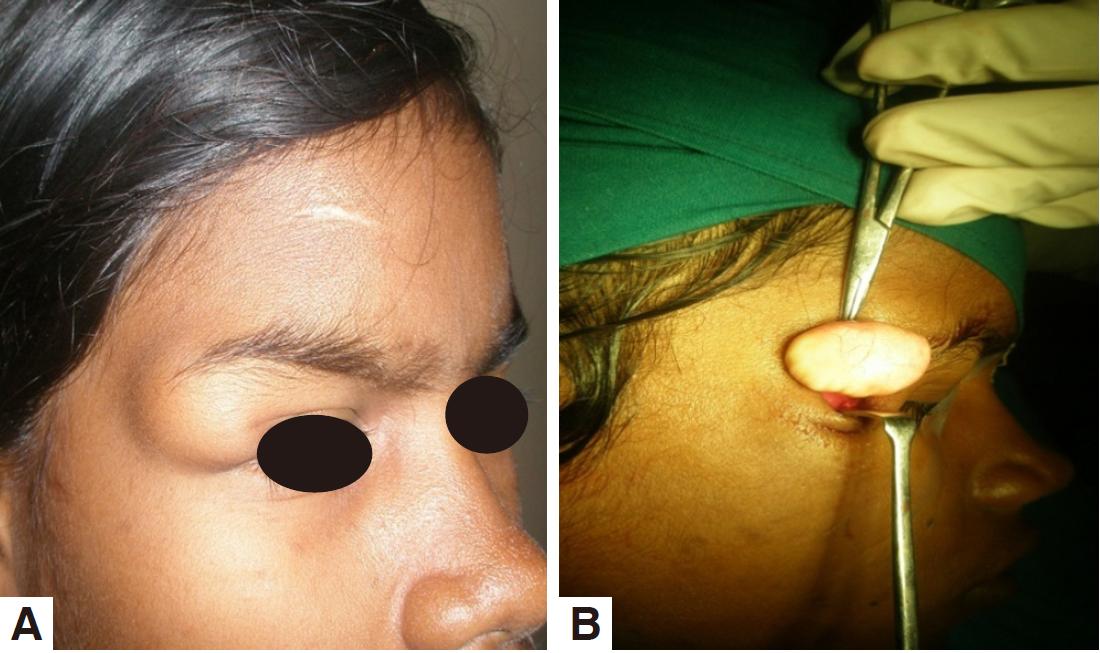 Figure 3. Preoperative (A) and intra-operative (B) view of a dermoid cyst of lateral orbital margin 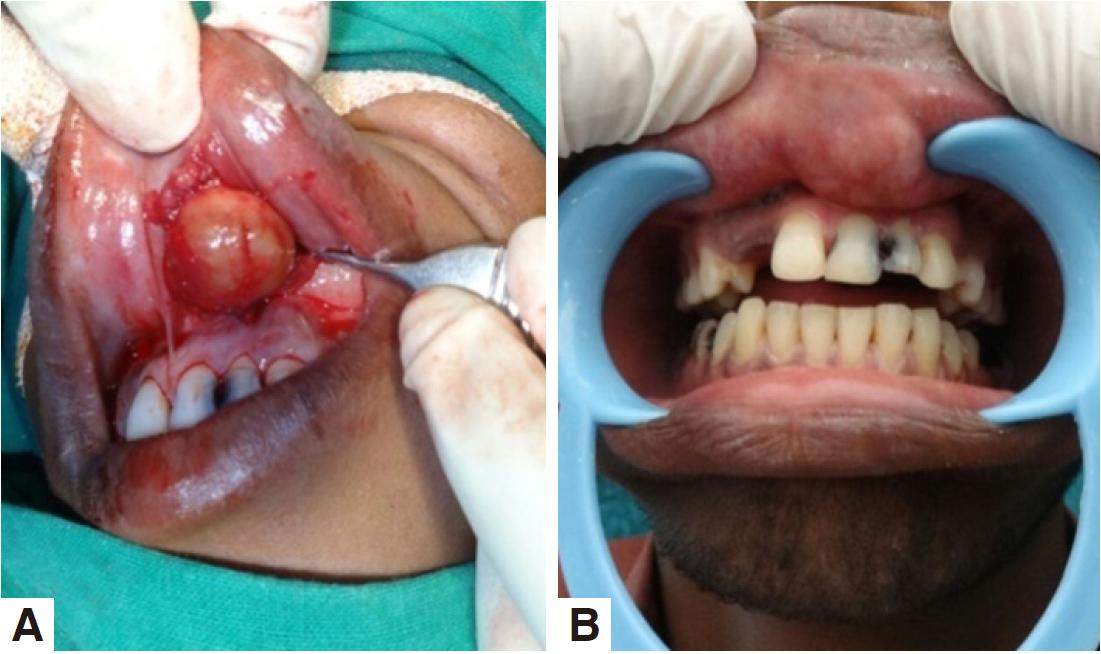 Figure 4. Preoperative (A) and intra-operative (B) view of a epidermoid cyst of the upper lip

Dermoid cysts have been classified as true dermoid cysts, epidermoid cysts and teratoid cysts.[1-3,6] Several theories have been proposed to explain the development of dermoid cysts: they may result from entrapment of ectodermal tissue of the first and second brachial arches during fetal development; they could represent a variant form of the thyroglossal duct cyst; finally, previous surgical or accidental events could lead to traumatic implantation of epithelial cells into deeper tissues.[1,4] In our case series, we had the presentation of a patient with dermoid cyst in the upper lip region. There are paediatric cases in the literature with epidermal cyst lesions in the sublingual region, gingiva, palate, and uvula. Many of them had history of trauma or surgical intervention.[8] An epidermoid cyst is benign and rarely occurs in the oral cavity. When lesions occur in the floor of the mouth, one must think of other diagnoses including ranula, lymphatic malformation and heterotypic gastrointestinal cyst. When lesions occur in the tongue, a differential diagnosis of tumor of granular cells, schwanoma, lipoma and neurofibroma, should be considered. When lesions occur in the orbital region, the differential diagnosis of orbital cysts are lipodermoid teratoma, plexiform neurofibroma, encephalocoele, orbital cellulitis, and orbital pseudotumor deep dermoid.[9,10] Thus besides clinical examination, other complementary tests are necessary to achieve a diagnosis and eliminate other diseases.[2] Giant epidermoid cysts are common in females and are usually found on the scalp, in people working outdoors and who have had significant sunlight exposure. On the scalp, it occurs in an area located in a line drawn along the hairline passing through the upper border of the ear lobule and joining these two lines at the occipital area.[11] This is a retention type of cyst and is usually unilocular and contains keratin. Size varies from a few millimetres to a few centimetres but when the size exceeds 5 cm, it is referred to as a giant sebaceous cyst.[11,12] In our case series, giant cysts on the anterior scalp were present in 5 patients and posterior scalp in 3 patients.

Imaging has an important role in confirming the diagnosis and classifying cysts according to their relation to muscle. Ultrasound is the initial imaging modality. Epidermoid cysts are seen as well-defined cysts with multiple well-defined dependent echogenic nodules within the cyst. Computed tomography scan shows a unilocular cyst with homogenous, hypo-attenuating (0-18 HU) fluid material that contains multiple hypo-attenuating fat density nodules giving a “sack of marbles” appearance; this is a feature virtually pathognomonic for a dermoid cyst. Magnetic resonance imaging (MRI) shows fluid signal due to high protein content, and the areas of fat component will show low signal on fat suppressed images. MRI facilitates visualization of the exact location and extent of cystic lesions in the floor of the mouth and is useful for determining their relationship to the surrounding muscles.[3]

Pathological features of epidermoid cysts are oily or cheesy, tan, yellow, white material and the cyst wall is a fibrous capsule usually 2-6 mm in thickness.[3] Total excision is the main treatment for intraoral epidermal cystic lesions since needle aspiration or fenestration might lead to infection, pain, and complaints after treatment. Marsupialisation is another alternative for management of large cysts.[3] Lesions above the mylohyoid muscles are operated on intraorally, whereas those below the muscle are removed via an incision in the neck,[1,13] however, if there is a very large sublingual cyst above the mylohyoid muscle, an extraoral approach may be preferred. An intraoral approach avoids a conspicuous scar, and the recovery time is shorter.

In a study of 103 patients with diagnosis of epidermoid and dermoid cyst of the head and neck, 46.6% of these were orbital, 23.3% buccal and submental, 12.3% nasal, 10.7% cervical and 2.9% labial. Various publications also report epidermoid cysts of the oral cavity in the soft palate, the uvula and the sublingual area. However, epidermoid cysts in tonsils are rarely reported.[14] Our case series did not find any epidermoid or dermoid cyst in the tonsillar area.

In recent literature, we could find no reports related to orbicularis oris muscle fusion defects secondary to epidermoid cysts.[8] Considering the fact that these kinds of cysts mostly affect children, special caution and care should be applied regarding the precise diagnosis of the type of tumour and its accurate localization. Our case series found only one adult patient with a dermoid cyst located in the orbicularis oris region. The cyst should be completely removed, with minimal trauma and a satisfactory aesthetic effect.[8,17,18]

Dermoid cysts may increase in size, leak and cause inflammation, and thus, it is recommended that even asymptomatic cysts should be removed.[19] The reason for early excision is to prevent incidence of secondary infection. The recurrence rate after excision of an infected cyst is 20% of all cases reported.[20]

While dealing with scalp lesions, as well as other cutaneous lesions of the head and neck region, differential diagnosis of keratinous cysts should be kept in mind as these cysts carry certain complications such as cystic rupture, abscess, secondary, and infections, during their treatment. These cysts carry relatively higher risk of recurrence compared to lipomas and certain other benign lesions that mimic these cysts. Therefore, these cysts require thorough histopathological examination and close follow-up due to their potential for malignant transformation.[21] Early diagnosis and removal of dermoid and epidermoid cysts are of great concern as it can cause serious social stigma, aesthetic and functional impairment, dysphagia and dysphonia.

This study was approved by the Ethical Review Committee of D. Y. Patil Dental College and Hospital. 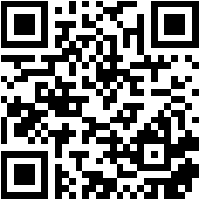