Aim: Penoscrotal defects may be caused by a variety of events. Reconstruction of the penoscrotal region is required not only for aesthetic appearance but also for functional and psychological reasons. Numerous techniques have been described for penoscrotal reconstruction reﬂecting the challenge and complexity of the region involved. This suggests that no single method is satisfactory for all types and degrees of tissue defects. This prospective study was conducted in a tertiary care hospital in India, over a period of 5 years.

Methods: Eighteen patients with penoscrotal defects of varying etiology were included in the study and underwent different surgical techniques. Age of the patients ranged from 20 to 60 years. The etiology of penoscrotal defect was Fournier’s gangrene in 12 cases, trauma in 4 cases, and burn in 2 cases. The patients with Fournier’s gangrene were initially treated by debridement, drainage, and antibiotics. The penoscrotal defects were treated with local ﬂap advancement with skin grafting (n = 7), pedicled anterolateral thigh ﬂap (n = 4), gracilis muscle ﬂap with split skin grafting (n = 4), and medial thigh ﬂap (n = 3).

Results: There was complete healing in 16 patients with minor complications in the form of partial skin graft loss (n = 1) and wound dehiscence (n = 1). Results were highly satisfactory in 6 patients, satisfactory in 8 patients, and not satisfactory in 4 patients. Scarring at the donor site was limited and acceptable.

Conclusion: The vast arsenal of options for penoscrotal defect coverage ranges from skin grafting to ﬂaps, and every case needs a customized approach with regard to its feasibility, outcome, and complication rate. Flaps should be the preferred choice over the skin grafts because of the superior functional and aesthetic results and better compliance.

Penoscrotal defects can be caused by road traffic accidents, assaults, burns, animal bites, infection/gangrene of the region (Fournier’s gangrene), postfilarial surgeries, penoscrotal construction for congenital agenesis, and gender reassignment surgeries.[1] Reconstruction of the penoscrotal region after a complete loss of the overlying skin is a challenging problem.[2] The difficulty in the reconstruction of the scrotum lies in the fact that the blood supply to the scrotal skin is destroyed when the skin and dartos muscle are avulsed or infected.[3] Bacterial flora of the perineum, difficulty of immobilization, and contour of penis and testes makes the task of peno-scrotal coverage difficult.[4] Reconstruction of the scrotum is required not only for cosmetic but also for functional and psychological reasons as well. Various surgical options have been described for penoscrotal reconstruction including split skin grafting (SSG), burying testis underneath the medial thigh skin, tissue expansion of adjacent tissues, use of local fasciocutaneous or musculocutaneous flaps, and free flaps. The aim of this study was to evaluate various reconstructive procedures for penoscrotal defects.

A prospective study was conducted in a tertiary care hospital over a period of 5 years from March 2009 to February 2014. The operated patients were reviewed on a regular basis in context to the outcome of the procedures, complications, and further need for any intervention. Patients with penoscrotal defects of varying etiology and who had been operated using different reconstructive techniques were included in the study. Patients with uncontrolled diabetes were excluded from the study. Demographics, etiology, reconstructive technique, complications, and patient satisfaction were identified.

Patients with Fournier’s gangrene were initially treated by debridement, drainage, and antibiotics. The penoscrotal defects were treated with local flap advancement with skin grafting, pedicled anterolateral thigh (ALT) flap, gracilis muscle flap with skin grafting, and medial thigh flap. Local flaps from remaining scrotal skin and adjacent medial thigh were advanced to cover the exposed testes. Any remaining defect was skin grafted. Lateral thigh flaps were raised based on the lateral circumflex femoral artery branch of the femoral artery to cover the defect [Figure 1a and b]. The donor area was primarily closed [Figure 1c and d]. Medial thigh flaps based on the medial circumflex femoral artery branch of the femoral artery was raised in the relatively bloodless subfascial plane. Gracilis muscle was separated from the distal end after dissection with preservation of the vascular pedicle present at the proximal part [Figure 2a-c]. The dissected muscle was transferred over the defect and passed through a subcutaneous tunnel [Figure 2d]. The transferred muscle was skin grafted, and the harvested site was closed primarily [Figure 2e and f]. The operated patients were followed in our hospital at a regular interval and were asked about the improvement on a global scale of 1-10, ranging from not satisfied to highly satisfied. The penoscrotal defect etiology was Fournier’s gangrene in 12 cases, trauma in four cases, and burn in two cases. 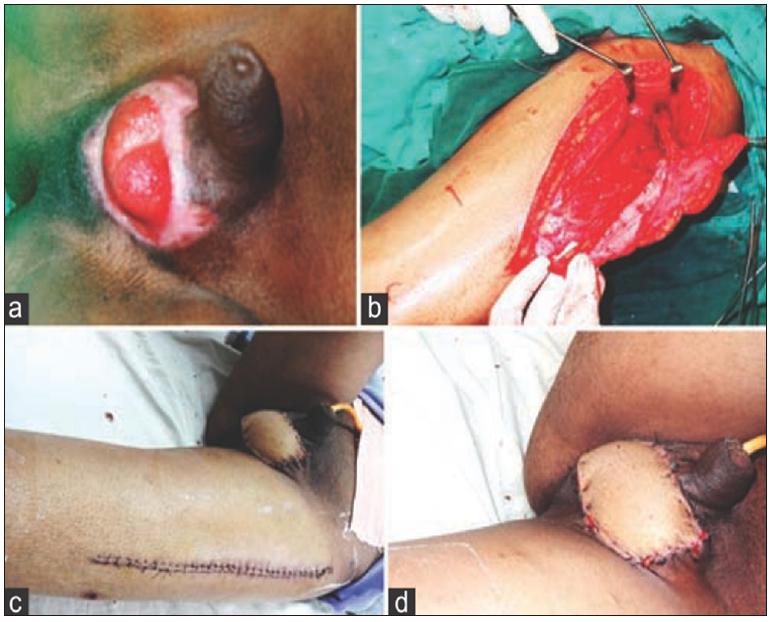 Figure 1. (a) A 28-year-old male with a history of road traffic accident presented with a penoscrotal soft tissue defect and exposed testes; (b) raised anterolateral thigh flap; (c) the bridging segment was de-epithelized, and the flap was tunneled; the defect was covered, and the donor area was primarily closed; (d) 10 days postoperative result 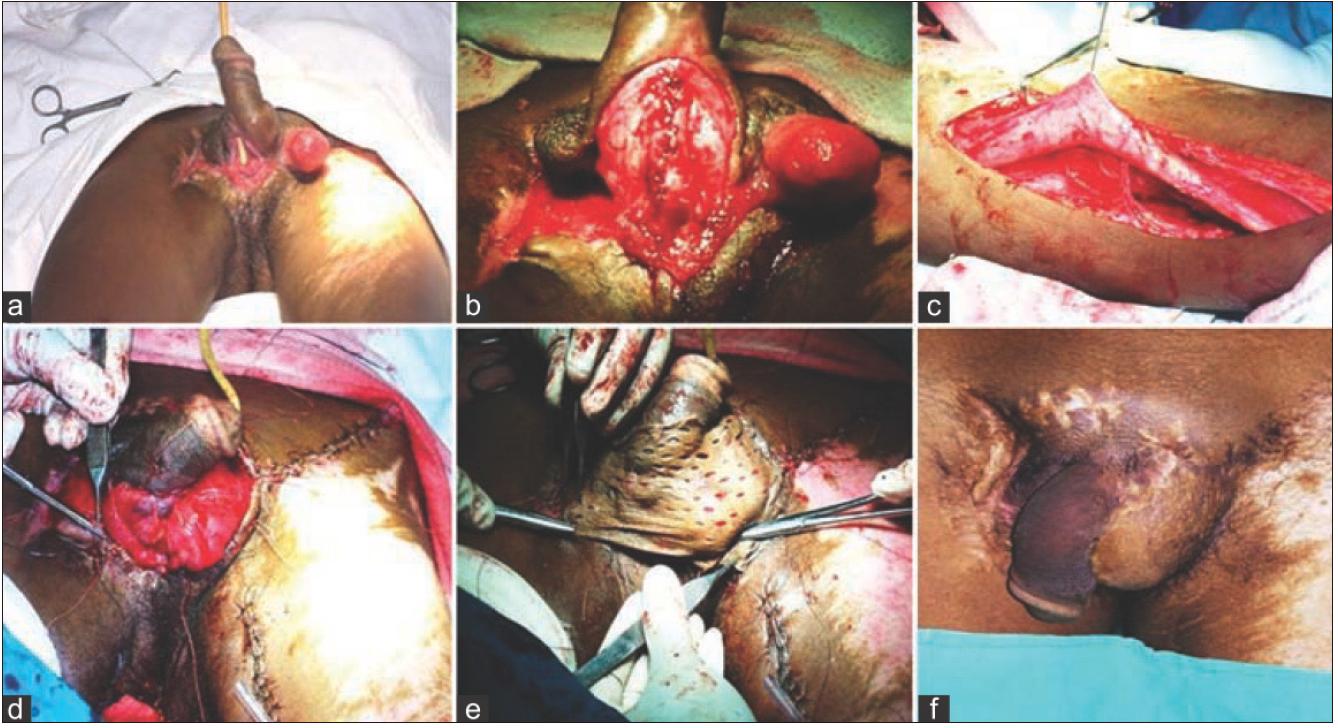 Details of the patients included in the study

SSG for scrotal avulsion injuries was first advocated by Millard and subsequently by Maguina.[4-6] In cases of complete loss of penile and scrotum skin, grafting may be the most successful and simplest option in the closure of these defects.[4] The spermatic cord can be partially retracted up into the inguinal canals, and testicles should be sutured together to minimize motion and maximize graft take. Long-term success with skin grafting for scrotal injury is excellent, and only 20% of patients require significant revisions or reconstructions. However, SSG may have certain disadvantages such as technical difficulty at recipient site, poor graft take, contraction and distortion, lack of protective sensation, and less acceptable cosmetic results. An SSG does not take if the testes have been stripped of the tunica vaginalis. SSG is a better option for old or debilitated patients, while young patients benefit from flap coverage.

Several locoregional cutaneous and fasciocutaneous flaps from thigh, perineal, and groin areas have been described to reconstruct the penoscrotal region. Local flap advancement provides a faster and simpler option of coverage, but the aesthetic appearance may not be pleasant to the younger patients.

The ALT flap provides excellent closure for extensive defects of the penoscrotal region because it is easy to rotate over the defect and provides excellent aesthetic results. Further thinning may be required as they are inherently bulky flaps though supra-thin flaps have also been described.

The fasciocutaneous flap of the inner thighs has excellent vascularization because of the presence of the branches of the femoral artery (internal and circumflex pudendal arteries), making the flap very safe even in diabetic and vasculopathic patients.[7,8]

Many myocutaneous flaps have been described, including the rectus abdominis myocutaneous flap, the gracilis myocutaneous flap, and composite gastric seromuscular and omental pedicled flaps.[9-11] These procedures produce acceptable cosmetic results, and the flaps take readily even in the contaminated environment. Limitations of muscle flaps include loss of functioning muscle, poor sensation, and scarring on thighs and lower abdomen.

In conclusion, reconstruction of the penoscrotal region is challenging because it not only affects the physical and esthetic appearance but also has a major psychological and social impact to the patient. Every case needs a customized approach. The choice depends upon the surgeon’s preferences, condition of the patient, and ability to achieve the best reconstructive results with the least morbidity.