Conclusion: these results demonstrate that LiCl can be used to differentiate HFSCs into hair follicle cells in vitro, which has important therapeutic applications for treating patients with cutaneous damage.

The discovery of hair follicle stem cells (HFSCs) and the development of methods to culture these cells in vitro have led to the possibility of developing new tissue engineering treatments for cutaneous damage caused by burns.[1] HFSCs are highly proliferative multipotent stem cells with multi-lineage potential. They can differentiate into a range of distinct cell types including epidermal cells, hair follicle cells, and sebaceous cells.[2] Both the proliferation rate and the differentiation capacity of HFSCs are influenced by autologous genes and external signals. The Wnt/β-catenin signaling pathway plays a crucial role in the development of follicles and hair.[3,4] During both embryonic development and tumorigenesis Wnt proteins bind to their receptors and activate Wnt/β-catenin signaling, leading to β-catenin accumulation in the cytoplasm and subsequent nuclear translocation. β-catenin binding to lymphoid enhancer factor-1 (LEF1) activates target genes and accelerates the directional differentiation of HFSCs.[3,4] Other factors, including chemicals (e.g. LiCl) and growth factors, influence cytoplasmic β-catenin levels in HFSCs, leading to HFSC differentiation.[1] However, details of the mechanism require further investigation. The purpose of this study was to investigate how keratinocyte growth factor (KGF) and LiCl influence the function of the Wnt/β-catenin signaling pathway and its interaction with other signaling components during human HFSC differentiation into dermal papilla and epidermal cells.

Fresh scalp specimens were obtained under aseptic condition and HFSCs were isolated using previously established methods.[1] Briefly, scalp skin from patients undergoing surgery was washed repeatedly with phosphate buffered solution (PBS) containing 5% penicillin and streptomycin (North China Pharmaceutical Corporation, China). After removing subcutaneous adipose tissue and impurities, the skin was cut into 4 mm × 2 mm pieces, placed in a centrifuge tube containing 0.25% Dispase (Shanghai Biological Technical Company, China), and digested overnight at 4 °C. The hair follicles were then gently pulled out in the direction of hair growth. The dissociated adipose tissue was then washed with PBS and hair follicles were added to a 60-mm petri dish containing 10% fetal bovine serum (FBS) in Dulbecco’s Modified Eagle Media (DMEM; Hyclone, USA). Bulge areas were isolated from the hair follicles by incubation with 2.5 g/L trypsin and 0.04% EDTA for 10 min at 37 °C, followed by centrifugation and resuspension in K-SFM medium (Shanghai Biological Technical Company, Shanghai, China) at a density of 5 × 107 cells/L. Cells were incubated at 37 °C under 5% CO2 in a humidified incubator. The culture medium was replaced every 3-4 days, and HFSCs were cultured and passaged three times prior to being used for all experiments.

Measuring the proliferation rate of HFSCs

To measure their rates of proliferation, HFSCs were seeded at the following four different densities: 1 × 103, 1 × 104, 1 × 105, and 1 × 106 cells/mL of 24-well plate. Growth curves of the HFSCs were obtained by seeding 1 × 105 logarithmically growing cells in 1mL medium into each well of a 24-well culture plate. A total of 36 wells were used. Hoechst 33258 DNA quantitation was performed every day after 7 days in culture.

Immunofluorescence analysis was performed as previously described.[5] Briefly, sterile glass coverslips were placed into 60 mm dishes, and approximately 2 × 104 cells/mL of 24-well plate were seeded into each dish. After 7 days in culture, adherent cells were stained for pan-cytokeratin, K19-Cy3, and β1-integrin and analyzed by immunofluorescence microscopy.

Treatment with LiCl and KGF

To investigate the effects of specific compounds on HFSC differentiation, HFSCs were treated with LiCl (0.5, 1.5, 10, or 25 mmol/L) or KGF (10, 25, 50, or 100 µg/L). After 7 days, Hoechst 33258 DNA quantitation was performed to compare the effects of different incubation times on cell proliferation.

Primer design and synthesis: primer design was based on the target DNA sequences. To avoid contamination of genomic DNA, primer pairs were designed to amplify across an intron [Table 1]. Primers were synthesized by Shanghai Sango Biotech Co. Ltd. (Shanghai, China).

Primary cells derived from the hair follicle bulge were spheroid, small, and evenly sized. Live cells were optically transparent with a clear boundary and clusters of undissociated cells could be seen [Figure 1]. Trypan blue staining showed that 95% of cells were alive. At the initial stage of culture, cell adhesion and activity were weak. After culture in serum-free K-SFM containing epidermal growth factor (EGF) for 1-3 days, a few human HFSCs were observed to adhere to culture vessel, although most remained in suspension [Figure 1A and B]. After 4-6 days in culture, a few single cells or cell clusters had attached to the culture dish; these had a cobblestone-like appearance, an orderly arrangement, and were highly refractive. Cell numbers increased with increasing culture time [Figure 1C and D]. After 2 weeks in culture, a small number of aging cells were observed. 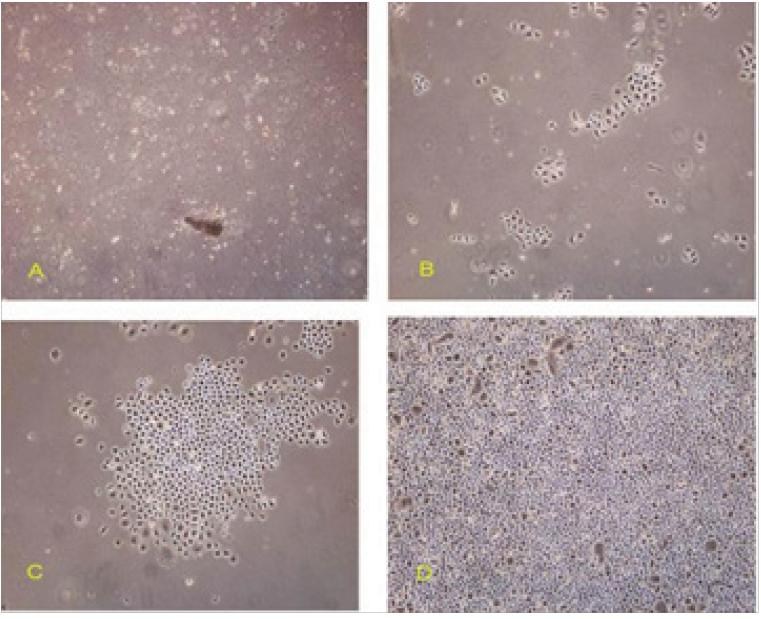 Growth curves [Figures 1 and 2] show that the cell growth rate was slow on days 1-3. On days 4-6, cells grew faster and were in the logarithmic phase. After this point, cell growth became slower and aging cells appeared.

Cell proliferation varied according to seeding density [Figures 3 and 4]. At seeding densities of 1 × 103 and 1 × 104, a few cells showed clonal growth but cells proliferated slowly and most died after a short time in culture. When the seeding density was increased to 1 × 105 cells/mL, cells proliferated well and showed adherent growth at early time points. Cells seeded at a density of 1 × 106 cells/mL rapidly formed clusters and underwent contact inhibition following rapid nutrient depletion. These cells showed signs of aging.

Identification of HFSCs and characteristics of HFSC protein expression 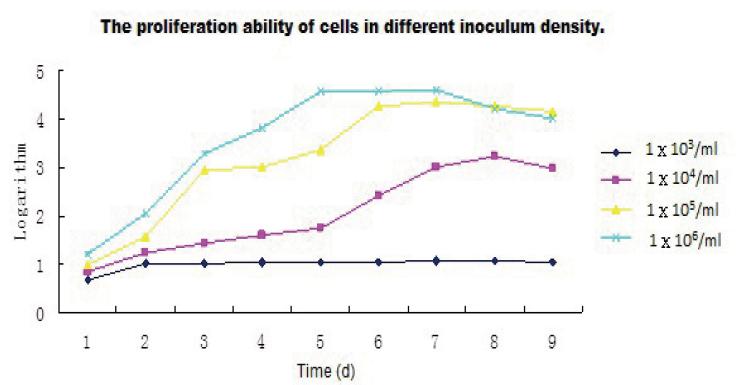 Figure 5. Hair follicle stem cells morphological observation and protein expression. Cells have round or oval nuclei and a high nucleus and cytoplasm ratio. Immunofluorescence staining of pan-cytokeratin (A), K19 (B), and β1-integrin (C). Magnification, X200

The influence of LiCl on HFSC proliferation 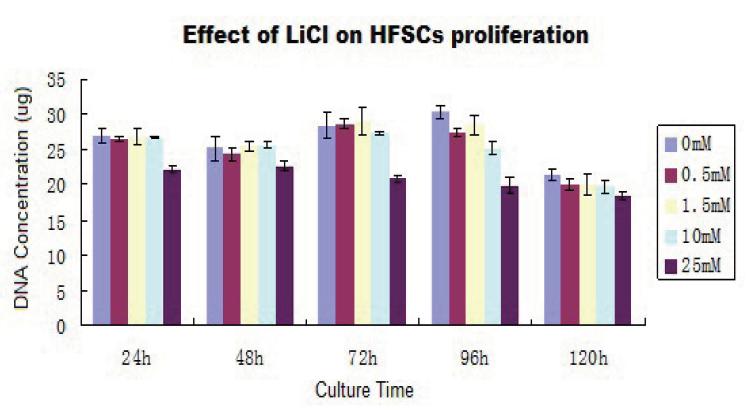 Effect of KGF on HFSC proliferation 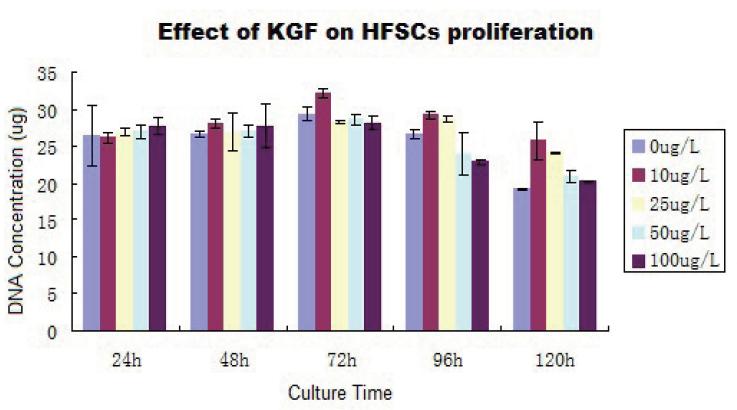 Statistical analyses showed that after 24 h of culture, there were no significant differences between the KGF-dose treatment groups and the control group.

Effects of LiCl and KGF on HFSC differentiation and morphology

There were obvious differences in cell morpho-differentiation, adhesion, and proliferation between the 10 mmol/L LiCl and 10 µg/L KGF treatment groups and the control group [Figure 10A-D]. The LiCl 10 µg/L treatment group showed a significant increase in proliferation [Figure 10E-H]. By contrast, the proliferation rate of KGF-treated cells initially increased in a dose-dependent manner. However, cell proliferation decreased with aging and vacuoles formed within the cells at later time points [Figure 10I-L]. 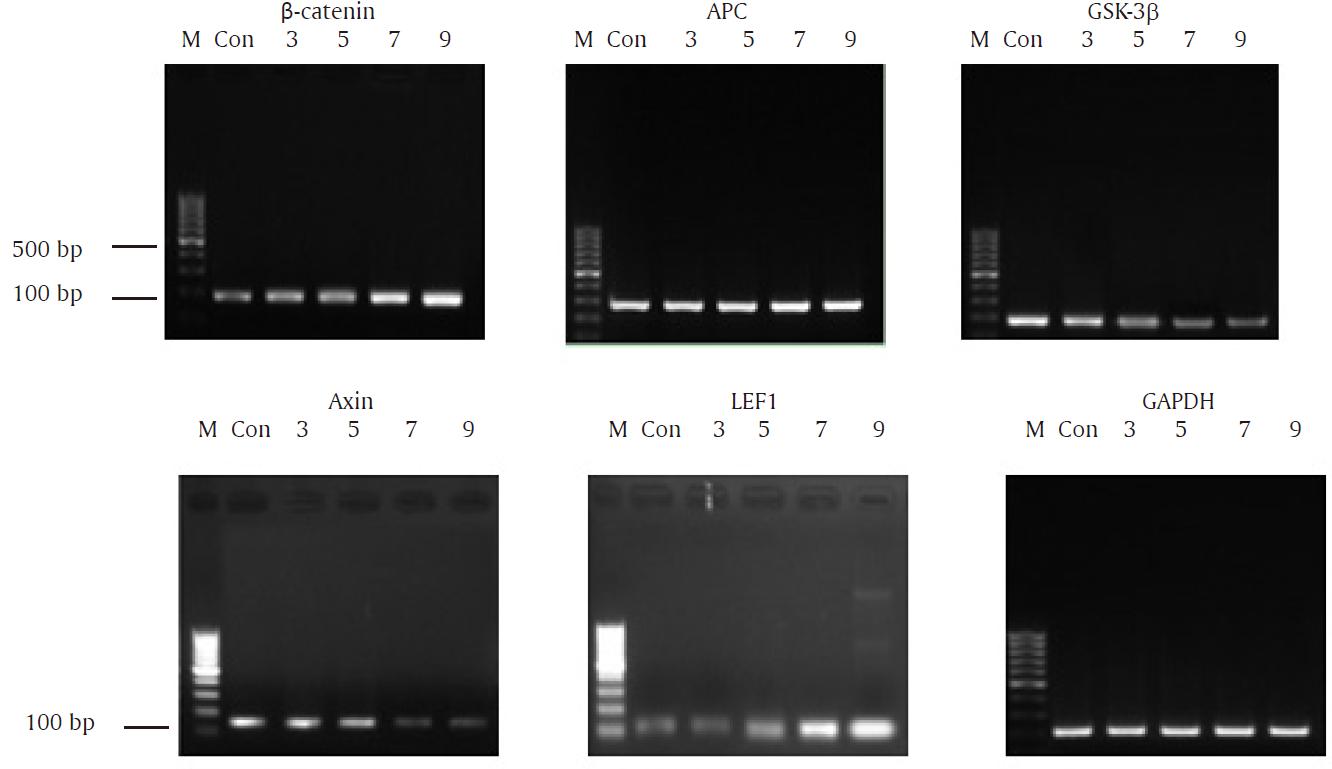 LiCl, a crucial Wnt signaling agonist, inhibits the activity of GSK-3β.[11] GSK-3 phosphorylation at serine-9 prevents GSK-3β from degrading β-catenin, thus elevating β-catenin expression.[14] This study found that low LiCl concentrations (0-10 mmol/L) not only induce β-catenin expression but also slightly increase HFSCs proliferation. However, proliferation decreased as the LiCl concentration was increased. LiCl treatment also led to a reduction in cell adhesion and caused HFSCs to grow in dispersed clusters. This is a result of LiCl inhibiting intracellular E-cadherin expression, which weakens cell adhesion and facilitates cell migration.[15] This phenomenon may result from E-cadherin transposition caused by β-catenin up-regulation. These data suggest that changes in β-catenin expression can change cell adhesion, which has an important role in promoting cell proliferation.

In the current study, β-catenin expression directly correlated with the β-catenin-axin-APC-GSK-3β complex, but inversely correlated with GSK-3β and axin levels. Axin, a critical negative regulator of the Wnt signaling pathway, is a key component of the β-catenin degradation complex. It has several protein-protein interaction domains and functions as scaffolding protein in various protein complexes. Axin brings GSK-3β in close proximity to β-catenin and regulates the degradation of phosphorylated β-catenin. This study demonstrated that LiCl suppresses the expression of GSK-3β mRNA and thus inhibits the formation of the axin complex, which indirectly elevates the level of β-catenin.

As a downstream transcription factor in the Wnt signaling pathway, LEF1activates the transcription of specific genes. According to recent reports,[7,8,16] endogenous LEF1 synergizes with Wnt signaling. It is widely accepted that β-catenin activates downstream target genes through a complex formation with LEF1. Cofactor ALY, enhancer TCRα, and LEF1 cooperatively form a higher-order nucleoprotein complex that enhances the synergistic activation of β-catenin/LEF1 and thus transcriptional activity.[16] This study found that LiCl treatment increased the levels of β-catenin and LEF1 mRNA along with the course induce. It is likely that increased protein levels of β-catenin complex with LEF1. These results are identical with those of the above-mentioned mechanisms of the Wnt signaling pathway, and indicate that activations of the β-catenin and LEF1 signaling pathways are involved in HFSC’s differentiation.

Numerous studies have shown that β-catenin functions by forming a complex with LEF1 in the Wnt signaling pathway.[17-20] Zhu et al.[17] transfected keratinocytes with retrovirus and found that mutant LEF1 expressed in the basal lamina of transgenic mice cannot interact with β-catenin. Thus, hair formation is prevented and adult basal epidermal cells are transformed into pluripotent embryonic-like ectoderm. LEF1 is an essential transcriptional factor for the normal development of hair follicles. LEF1 expression stimulates the stem cell to develop into hair, facilitates differentiation of both hair matrix cells and hair follicles, and participates in the formation of the root sheath.

In an attempt to improve our understanding of the role of β-catenin in HFSC proliferation and differentiation, this study investigated whether KGF treatment stimulates these processes via the Wnt signaling pathway. The results indicate that adding KGF to serum-free culture medium containing EGF stimulated HFSC proliferation. Although this effect was not apparent in the first 48 h of culture, for incubation times more than 48 h, there was a marked difference in DNA content between the 10 µg/L KGF treatment group and control cells. The reduction in DNA content indicates that KGF maintains cell proliferation and postpones keratinocyte differentiation.

Richardson et al.[6] observed repression of hair follicle induction by KGF and EGF in cultured mice embryo skin. They found that Wnt signaling plays a role in the initial formation of hair follicles, and that the latter stages of follicle formation are dependent on the Shh signal. Formation of the hair follicle is usually caused by activation of Wnt signaling and upregulation of β-catenin mRNA. The Shh activating signal also elevates Gli1 mRNA. Nuclear LEF1 expression occurs at the initial stages and increases after 24 h. However, epidermal cells induced by KGF or EGF contain high nuclear LEF1 expression at all time points. KGF and EGF noticeably inhibited several important signaling molecules produced by hair follicles, including Wnt (LEF1, DKK4), Shh single pathway, and delayed HFSC differentiation. Recently, Andreadis et al.[21] using a skin equivalent model system, demonstrated that KGF significantly facilitates the proliferation of epidermal cells inoculated in a cellular dermal matrix, which is associated with induced expression of α5β1 integrins and delayed keratin-10 expression. In the present study, HFSCs were observed to exhibit a low proliferation rate in the first 72 h after KGF treatment, especially in the 10 µg/L treatment group. When the culture time was longer than 72 h, DNA measurements showed that KGF treatment postponed apoptosis, but that high KGF concentrations accelerated cell aging. This may be related to excessive nutrient consumption in the in vitro culture medium. In cells treated with 10 µg/L KGF β-catenin expression increased slightly and GSK-3β expression decreased on day 7, as HFSCs underwent differentiation. LEF1 levels, however, declined at an early stage. How KGF switches the Wnt/β-catenin pathway from an activated state to an inhibited state is unclear. However, this data suggest that KGF concentration inversely correlates with LEF1 expression and represses HFSC differentiation and the formation of hair follicles. This result supports a direct association of KGF with the Wnt signaling pathway through reducing LEF1 levels. These data are consistent with the results of Richardson et al.[6] However, some of the links that mediate KGF regulation of the Wnt signaling pathway are not yet clear and require further investigation.