Pathogenesis, presentation and classification of late autoinflation of the breasts: case report and literature search

This article belongs to the Special Issue Aesthetic Surgery of the Breast
Views:3046 | Downloads:563 | Cited:

Conclusion: Late autoinflation of the breast due to seroma is an uncommon clinical complication and can be treated conservatively in the first instance.

Since the introduction of implants in 1962, augmentation mammoplasty has become a widely accepted procedure for aesthetic and reconstructive reasons.[1] An estimated five to 10 million women have breast implants worldwide.[2] Early and late complications following mammoplasty are many. It is beyond the scope of this article to address all the arising complications. Intracapsular fluid is a common finding and has been reported with an incidence of 15%. The accumulation of fluid was minimal and did not lead to swelling of the breast nor was it the reason for revision surgery.[3,4]

The presentation of anaplastic large cell lymphoma (ALCL) following augmentation mammoplasty also presents as an autoinflation of the breast. There is increasing awareness of ALCL which merits special attention.

The current article looks at the management and presentation of three patients. These patients presented with spontaneous autoinflation of the breasts due to late seroma. Also included is literature search to discuss various causes, locations and type of the texturing of the devices for the development of autoinflation of breast.

Details of the cases presenting with late seromas in the series

A 34-year-old mother of 2 children was interested in breast augmentation procedure. The augmentation mammoplasty was performed using 605 mL TRF Allergan Natrelle INSPIRA cohesive gel silicone textured round implants in muscle splitting pocket. She had an uneventful recovery. Eight months following augmentation mammoplasty, she presented with spontaneous autoinflation of her right side. There was no recollectable history of trauma or injury. She was treated with antibiotics, cold compress, support garments and was followed up with regular intervals. The swelling gradually subsided within 2 months without surgical intervention and there was no recurrence for 8 years [Figure 1]. 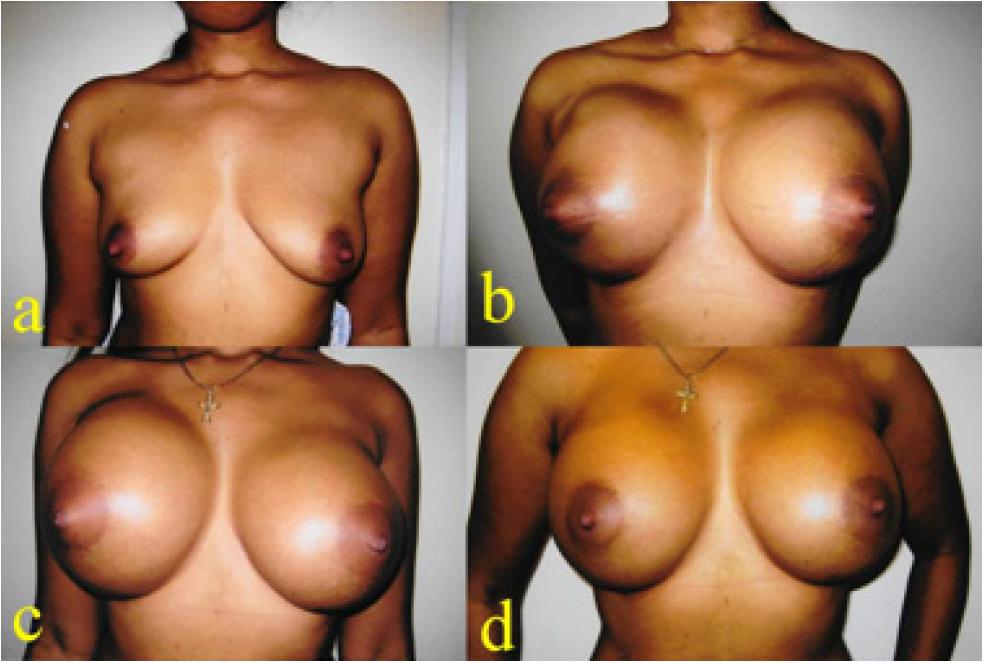 A 25-year-old mother of 1 child showed interest in augmentation mammoplasty following the loss of volume of her breasts. Augmentation mammoplasty was carried out using 310 TRM Allergan Natrelle INSPIRA cohesive gel silicone textured round implants in muscle splitting pocket. She had an uneventful recovery and all settled well. Eight months following her surgery, she presented with quick onset autoinflation of her right breast. She was treated conservatively with antibiotics, cold compress and support garment. The swelling subsided in 8 weeks without surgical intervention and without recurrence for 6 years [Figure 2]. 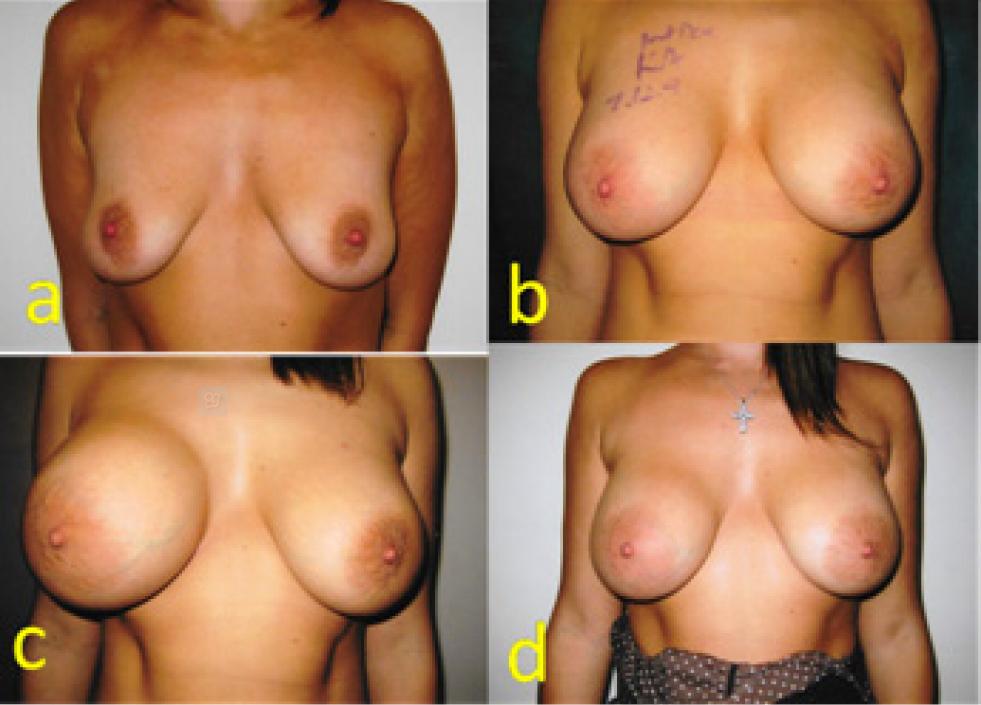 A 19-year-old young female presented with asymmetrical breast along with right breast ptosis. She had her augmentation mammoplasty procedure using 275 mL on her right and 345 mL on her left side. Nagor GFX cohesive gel silicone textured implants were placed in muscle splitting pocket a right internal mastopexy was performed at the same time. Eight years later patient presented with an acute onset of right-sided autoinflation of breast. She was reassured and treated conservatively with antibiotics, cold compress and pressure garments successfully without any surgical intervention. Her swelling subsided within 6 weeks and has been asymptomatic for the last 6 months [Figure 3]. 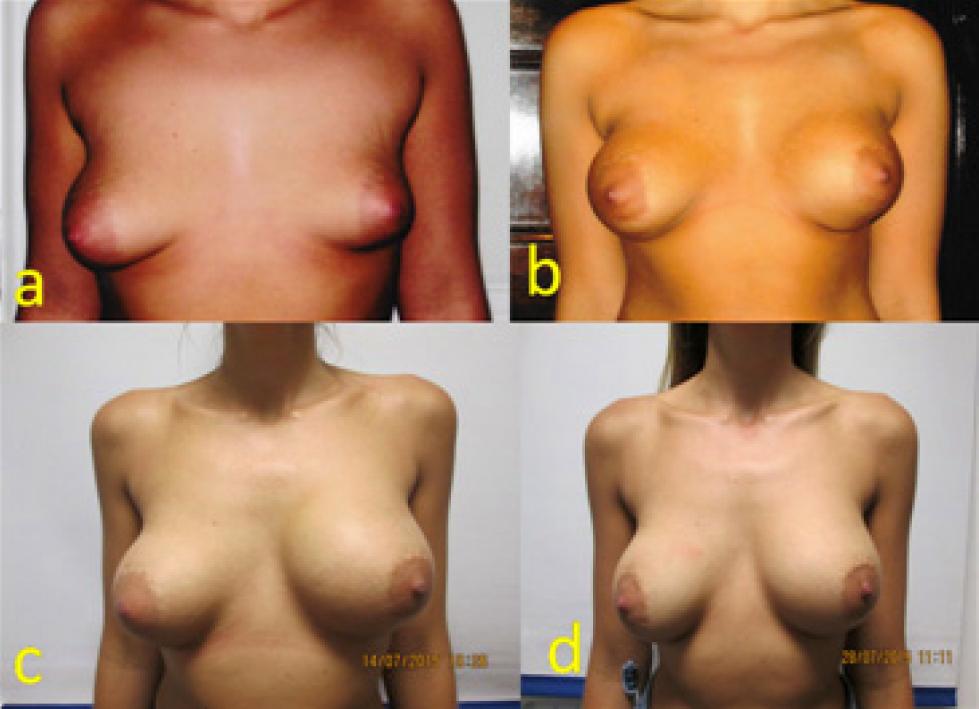 Complications following augmentation mammoplasty though not very common can be early or late. Early complications are infection, haematoma and seroma and may require an urgent surgical intervention. Late complications are infrequent and may include capsular contracture, asymmetry, implant rupture, implant displacement, rippling and synmastia.[5] Revision for these complications can be addressed on the basis of its presentation as an elective procedure. Autoinflation of the breast arising six months or later is an extremely rare presentation. Such autoinflation may have different causes and fluid collection can be intraprosthetic, intracapsular, extracapsular or a combination of the above. The fluid collection is equally seen in implants when silicone, hydrogel or saline is used as filler. The implants can be textured, microtextured, smooth or polyurethane coated.[3,4] However, there is a paucity in literature on the pathogenesis of this condition and is not comprehensively defined on the basis of aetiology, pathogenesis, anatomical location or type of implants.

Intraprosthetic collection of fluid or sterile pus though not very common has been reported both in saline as well as silicone gel implants.[11-14] However the process differs in the two instances. In saline implants, the shell allows passage of protein macromolecules, predominantly albumin that creates an osmotic gradient across the macroscopically intact silicone shell allowing body fluids to enter the prosthesis. The implants can gain a large volume of fluid and present as autoinflation of the breast. No extracapsular fluid collection has been reported with the process concerning saline implants.[14] On the contrary, intraprosthetic collection of fluid in silicone gel implant is almost always associated with damaged or ruptured shell that may or may not be macroscopically visible and there is almost always intracapsular collection of fluid or sterile pus at the same time.[11-13] The damaged shell allows intracapsular fluid to gain access to the inside of the damaged implant resulting in autoinflation of the breast.

Extracapsular fluid collection presenting as auto inflation of the breast

The similar process of autoinflation of breast is also seen in breast injected with polyacrylamide gel (PAAG). Injection of PAAG does not always produce a distinct layer of capsule. The fluid collection can be in the periphery of the injected material or within injected PAAG. The combination of extra and intra-PAAG collection of fluid may also present as galactocele, seroma or haematoma.[15] In PAAG injection the process of autoinflation is multifactorial, it has an inflammatory response resulting in sterile creamy pus like substance collection. Broken down PAAG products creates an osmotic gradient resulting in shift of body fluids into the injected PAAG resulting in autoinflation of the breast.[16]

Intracapsular or periprosthetic fluid collection presenting as autoinflation of the breast

Intracapsular or periprosthetic fluid collection can be seen following augmentation mammoplasty, revision mammoplasty or breast reconstructive surgery using breast implants. The presence of fluid has been reported in 15% of the revision surgeries and the amount of fluid collected ranged from 0.2 mL to 20 mL. The fluid can be thick, mucinous, blood stained or serous.[3,4] It is not surprising that collection of fluid in intracapsular space leading to autoinflation of the breast is the most common cause of the late autoinflation. Collection of thick mucinous creamy fluid, resembling like pus but without positive bacterial culture, is uncommon and is possibly due to a chemical reaction in response to the leaked silicone.[11-13] This type of collection is reported following PIP silicone and hydrogel implant ruptures[11-13] and PAAG injections.[15,16] The cause is the direct contact of the material with the body either through a rupture or following implantation or injection of PAAG.

Autoinflation of breast due to haematoma or blood stained fluid

This is not the most common form of intracapsular fluid collection presenting as autoinflation of the breast. This type of collection is seen following the separation of the adhered capsule from the textured surface of the implant following a physical force or trauma. These late blood stained fluid or haematomas are especially reported following the use of polyurethane coated implants, where disappearance of polyurethane coating results in inflammation and the implant starts behaving like a textured implant with a highly vascular internal lining of capsule rubbing against the textured surface of the implant.[17]

Autoinflation of breast due to late seromas

The collection of serum in intracapsular space following breast implant surgery is the most common form of autoinflation. The causes can be mechanical, inflammatory, traumatic, hormonal and most importantly malignant (ALCL). Textured implants are more commonly involved and the possible mechanism is the separation of the capsule from the textured surface of the implant. The shearing of the textured surface of the implant on the raw internal vascular surface of the capsular lining starts an inflammatory process resulting in exudation of the fluid that may lead to autoinflation of breast.[17,18]

Micro-movements between the micro-textured or smooth implants and capsule can result in synovial metaplasia of the capsular internal lining. The metaplastic lining continuously rubbing against the implant surface can trigger the process.[19,20] Other less well defined possibilities are the presence of subclinical infection, biofilms, any generalised condition leading to low immune response, allergic responses etc.[19] These latter factors need to be investigated further using microbiological assessment of the serum present in the intracapsular fluid along with the chemical analysis of blood and intracapsular fluid samples.

Malignant effusion of the intracapsular space secondary to ALCL is the least common but most alarming cause of autoinflation of the breast. ALCL is a rare type of non-Hodgkin lymphoma, which is distinctly different from the primary breast lymphoma of breast. Primary breast lymphomas are overwhelmingly of B-cell as opposed to T-cell phenotype that is associated with breast implants.[21] The incidence of primary breast lymphoma is less than 1% of all breast neoplasm as compared to an estimated 3 in 100 million women per year of ALCL reported. Implant related ALCL is reported in 34 cases out of estimated 5 to 10 million women with breast implants.[2] These haemopoitic tumours of T-cell origin is extremely rare and the common factor appears to be the texturing of the implants suggesting a site and material specific chronic inflammatory cause. Other possible causes are genetic predisposition and Biofilm organism that may play a contributory role. The condition is not related to the implant fill material.[22] Considering the extreme rarity of ALCL, it is likely that most physicians will never see a single case of ALCL in their career.[2]

Following is the recommendations and algorithm as a useful guide to manage late autoinflation of the breast from Bengtson et al.[23] Step 1: conservative treatment. Infection should be ruled out and antibiotics given when in doubt. Aspiration of fluid for culture and cytology when possible; Step 2: imaging ultrasound or magnetic resonance imaging (MRI). Ultrasound may also assist ultrasound-guided aspiration of fluid for culture and cytology; third step: if palpable or MRI evidence of a mass present or in case of refractory or recurrent seroma, surgical exploration is recommended. The procedure includes complete capsulectomy with or without implant replacement.

In the author’s practice, the incidence of late seroma was noted in 0.05% which is much lower when compared to 0.88% and 1.68% incidence reported in other series.[17,19] In the current series all three patients who presented with late seromas were treated conservatively using antibiotics and compression bandages. All responded to the treatment and there was no recurrence of autoinflation. One of the patient developed capsular contracture on the side of autoinflation due to late seroma. 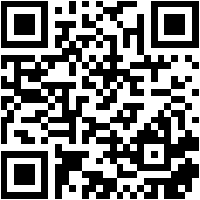