This article belongs to the Special Issue Aesthetic Surgery of the Breast
Views:5814 | Downloads:806 | Cited:

Aim: Simultaneous augmentation mastopexy is a challenging operation for esthetic plastic surgeons. Complication and revision rates following augmentation mammoplasty or mastopexy are less commonly seen when these two procedures are performed separately. However, when the two procedures are combined, the complication rate is reported exponentially higher when compared with its individual component carried out separately. The current retrospective chart review is a comparative analysis of the two procedures performed by a single surgeon.

Methods: Retrospective data were collected using patient’s charts. All patients who had augmentation mammoplasty (Group A) or simultaneous augmentation with mastopexy (Group B) in muscle splitting biplane using round cohesive gel textured silicone implants by a single surgeon were included.

Conclusion: There was a statistically and clinically significant higher rate of complications and revision rate noted in simultaneous augmentation with mastopexy (Group B) as compared to augmentation mammoplasty alone (Group A). However, the rise in complications rate is sum of the complications of the two individual components performed and not exponential.

All patients were operated under general anesthetic with full muscle relaxation and with their arms abducted and supported at an angle less than 90°. A single dose of intravenous cephalosporin was given to all patients at induction time. Augmentation mammoplasty is performed using inframammary incision, and periareolar, vertical or wise pattern scars were used for augmentation mastopexy depending on the preoperative measurements and wishes of the patient. Muscle splitting submuscular pocket was used for implant placement and procedure is performed as a day case. Drains were used in the earlier part of the study period. All patients wore support brassiere for 3 weeks as a routine.

Earlier complications related to wound infection, wound breakdown, hematoma, periprosthetic infection, use of drains, and size of the implants between the two groups were compared.

The data analysis was done. The results were given in the text as mean ± standard deviation for quantitative/continuous variables and percentages for qualitative/categorical variables. Two-tailed independent t-test is used for statistical significance between groups for quantitative/continuous variables and Chi-square/Fischer exact test for qualitative/categorical variables between groups. In all statistical analysis, only P < 0.05 is considered significant.

Simultaneous augmentation mastopexy has been cited as a technically demanding procedure with unpredictable outcome with high nipple and skin flap necrosis, however, a later article by the same author reported satisfactory results.[13,14]

Complications of augmentation mammoplasty and simultaneous augmentation mastopexy may require a planned or an unplanned theater visit for surgical intervention. Common early complications requiring surgical intervention are hematoma and periprosthetic infection. In current series, the hematoma in Group A was seen in 12 patients (0.9%). There were no hematomas seen in Group B when compared with a rate of 0.6% of hematoma in a large series of simultaneous mastopexy with augmentation mammoplasty.[15]

Periprosthetic infection rate has been reported for primary and secondary mammoplasties, respectively.[2,16] Wound breakdown of varying degree was less common inaugmentation mammoplasty as compared to augmentation mastopexy [Figures 1 and 2, Table 2].

Complications between the two groups 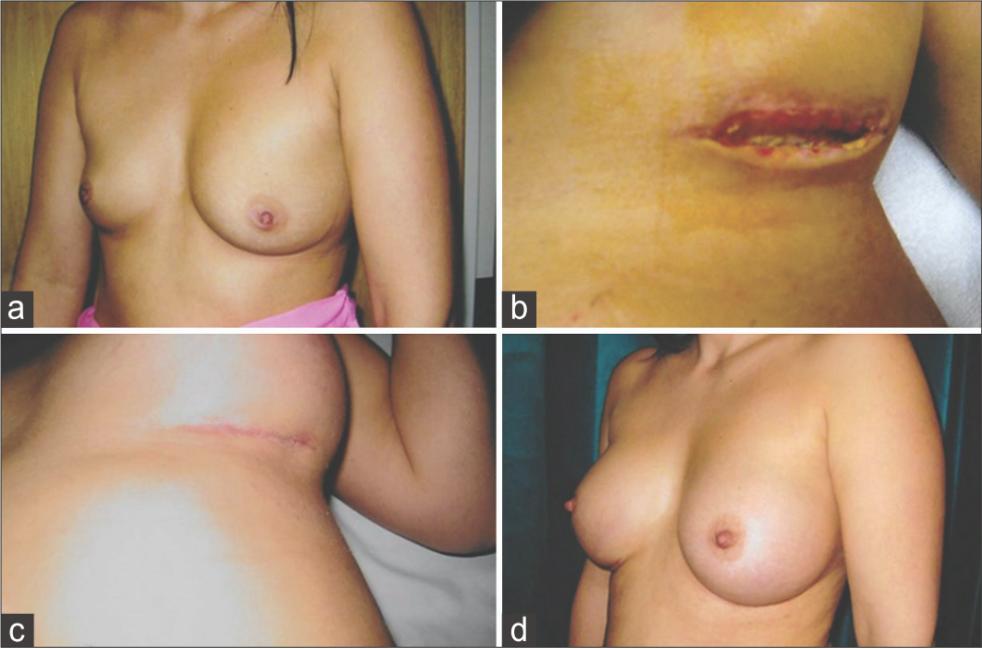 In current series, periprosthetic and wound infection were seen less commonly in augmentation mammoplasty when compared with augmentation mastopexy [Figure 3, Tables 2 and 3].

Implant size selection is an important part of the surgery, especially when a vertical scar or wise pattern markings are used for primary mastopexy augmentation [Table 1]. The skin envelope reductions in later two procedures limit the size of the implants in primary procedures and is due to the direct pressure and tension on newly sutured wounds exerted by expanded skin envelope.

The high number of complications or revision rate in combined augmentation with mastopexy is not exponential as reported in the past.[15] The simple reason is that, in patients with augmentation mammoplasty alone, the known early complications are infection and hematoma [Table 4]. In this group, nipple areolar complex (NAC) size and level asymmetry, NAC level under or over positioning, ischemia and necrosis of nipple, loss of nipple sensation, skin and wound breakdown, and scar-related complications are not seen [Table 5]. Similarly, when a mastopexy alone is performed, capsular contracture, implant rupture, revision for size change, rippling, change for size, or other device-related complications are not the reason for revision surgeries. When the two are combined together, the incidence is likely to be higher than the single component performed separately. A long-term follow-up has shown a revision rate of 15.5% when silicone gel round textured implants were used alone,[9] and a long-term tissue-related revision rate of 8.6% is reported when mastopexy alone was performed.[11] A revision rate of 10% and 25.8% has been shown in simultaneous augmentation mastopexy.[11,17] Although the revision rate in augmentation mastopexy is statistically significant, the increased rate of revision is simply the sum of the two individual components.

Reasons for revision surgery in mastopexy with augmentation

Earlier concerns about the safety of the procedure with exponential complication and revision rate were further reviewed by Swanson in a prospective study in which consecutive cases of augmentation mammoplasty, simultaneous augmentation mastopexy, and mastopexy alone were analyzed. A single surgeon did all procedures, all implants were placed in a submuscular pocket, and all mastopexies were performed using vertical scar with superomedial flaps. There was a revision rate of 20.5%, after augmentation mastopexy, 10.7% in augmentation, and 24.6% in mastopexy alone.[19] Again the results support the argument for a combine procedure than to stage the procedure without an added risk of higher complication. When the procedure is staged, the second operation rate is 100%, with two visits to hospital, two costs of individual procedures, and two lots of recovery time from each procedure.

Late complications following simultaneous mastopexy with augmentation mammoplasty and augmentation mammoplasty are mostly implant-related and include capsular contracture, rippling, and device failure. The complications related to implants are not unique to each individual procedure and are shared between the two. The revision for capsular contracture being the most common reason for reoperation in both these groups [Figure 4]. In general, capsular contracture and device failures are time dependent and longer the follow-up, higher the incidence resulting in revision surgery. 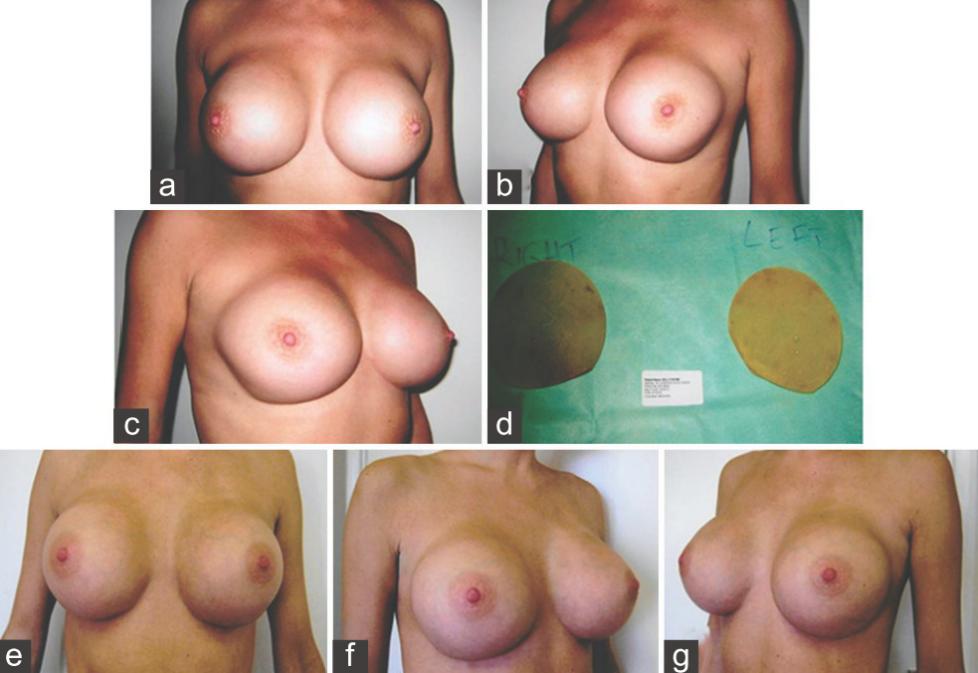 Rippling in the lower pole is almost unavoidable and largely depends on the type of implant and existing breast envelope thickness. Breast augmentation in subglandular pocket, regardless of the preoperative tissue thickness, tends to have a higher revision rate for rippling due to the ever-changing breast envelope thickness.[20] One very important tissue-related and avoidable complication following augmentation mastopexy is the siting of nipple and the choice of the markings. Choice of marking can vary from 65% areolar to 100% vertical scar markings.[18,21] Inappropriate marking for neo-NAC positioning, either too low or too high, also may result in persistent ptosis or bottoming out.[21] In authors experience, use of periareolar markings should ideally be limited for unilateral mastopexy with asymmetrical nipple areolar level and with a difference of not more than 2 cm or patients presenting with early ptosis with an NAC at inframammary crease level. A breast with skin excess in horizontal excess, a breast with a wide base, or a breast with lower pole skin excess, periareolar skin excision from above the nipple does not address the tissue excess and result in less than optimal outcome. Bottoming out following mastopexy using vertical scars in patients presenting more than 9 cm distance from nipple to inframammary crease is a common observation. Nipple elevation to another few centimeters results in increased and above average nipple to inframammary crease length leading to bottoming out. Vertical scar markings selection for all mastopexies or augmentation mastopexies as all-season markings is a novel idea but should be used with caution. Lower pole redundancy or persistent ptosis has been reported in 28% of all the mastopexies when vertical scar mastopexy alone was used for all types of mastopexies.[19] Other published studies also have shown that use of periareolar mastopexy or vertical scars markings was one of the leading cause for revision surgery in this group of patients.[22,23]

The current article did not include authors own mastopexy alone revision rate and results. Therefore, based on the study design, our conclusion has limitation. However, previously published data of mastopexy alone has been used, and our data correlate with what has been published. Furthermore, there was no patient satisfaction survey included that would have indeed added strength to the outcome analysis. 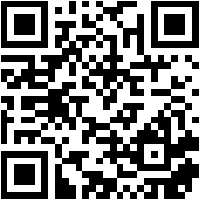