This article belongs to the Special Issue Aesthetic Surgery of the Breast
Views:6452 | Downloads:587 | Cited:

Results: With regard to prosthetic breast reconstruction patients, obese patients demonstrated increased rates of surgical complications, while underweight patients did not have any differences on multivariable analysis. With respect to autologous reconstruction, risk-adjusted multivariate regression models showed a dose dependent response between obesity and risk for surgical complications and reoperation, but not for underweight patients.

Much has been published regarding the risks of obesity on medical outcomes. The prevalence of obesity among adults in the United States has been steadily increasing over the past several decades such that today over 1 in every 3 adults is obese [body mass index (BMI) > 30 kg/m2], and nearly 1 in every 10 adults is morbidly obese (BMI > 40 kg/m2).[1,2] Obesity is a multi-system disease process which confers increased risk of medical comorbidities including hypertension (HTN), coronary artery disease, and diabetes mellitus (DM), and increases the risk of surgical morbidity.[3,4] Similarly, extremes of underweight have recently been described as a risk factor for surgery.[5-7] Several recent studies of critically and chronically ill patients,[8-11] and of patients undergoing certain procedures[12-15] suggest that overweight and obese patients may paradoxically have better outcomes than underweight patients, given an increased risk for death and catastrophic complications in the latter patients.

As many as 40% of women undergoing mastectomies in the USA, they are now seeking post-mastectomy breast reconstruction.[16-19] While much recent literature has detailed an association between obesity and poor surgical outcomes,[20-23] other studies have failed to demonstrate an increased risk of death or severe complications in these patients.[24-26] Conversely, very little has been written about the risk of underweight patients undergoing breast reconstruction. Such studies have been compromised by small sample sizes, single-institutional bias, retrospective study design, limited patient follow-up, inconsistent definitions of underweight, types of surgical procedures included, and outcomes studied.[27-30]

In an effort to better understand the influence of BMI on outcomes following breast reconstruction, we examined the National Surgical Quality Improvement Program (NSQIP) datasets. We aim to define and benchmark the risks and outcomes associated with breast reconstruction in underweight patients. We hypothesized that patients who are at extremes of low BMI would have a higher risk of adverse outcomes.

Multivariable logistic regression analysis was utilized to investigate the impact of BMI values on outcomes. Preoperative variables with ≥ 10 occurrences and P ≤ 20 on bivariate screening were included in the analysis. All analysis was conducted using Statistical Product and Service Solutions (SPSS) version 21 (Chicago, IL). P values less than 0.05 were statistically significant. For statistical evaluation, the reference population was defined as the normal-weight cohort (i.e. BMI 18.5-29.99).

In review of the 25,346 plastic surgery patients extracted from the database, 4,676 patients met criteria for study inclusion. Three-fourths (3,513) of the reconstruction patients received prosthetic reconstruction and the remaining quarter (1,163) underwent autologous tissue based reconstruction. Rates of hypertension, diabetes, and dyspnea increased as BMI values increased in both prosthetic and autologous cohorts [Tables 1 and 2]. For statistical evaluation, the reference population was defined as the normal-weight cohort (i.e. BMI 18.5-29.99). 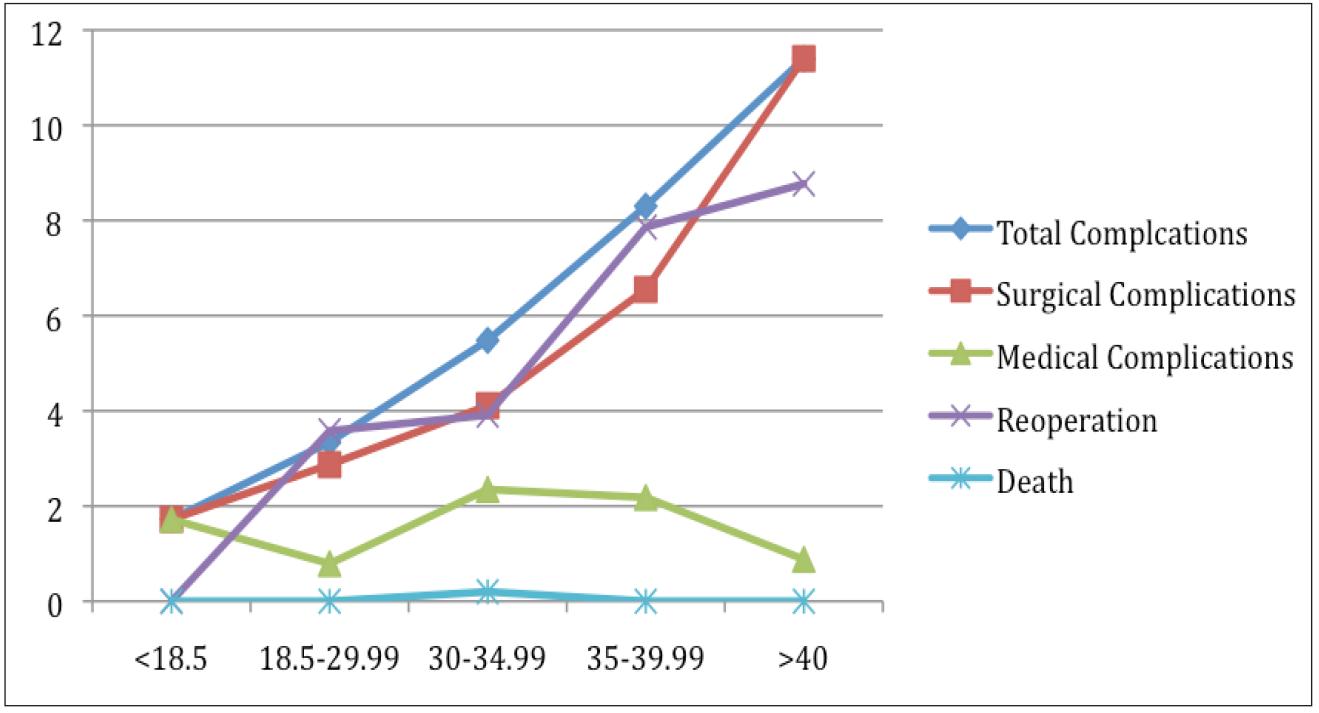 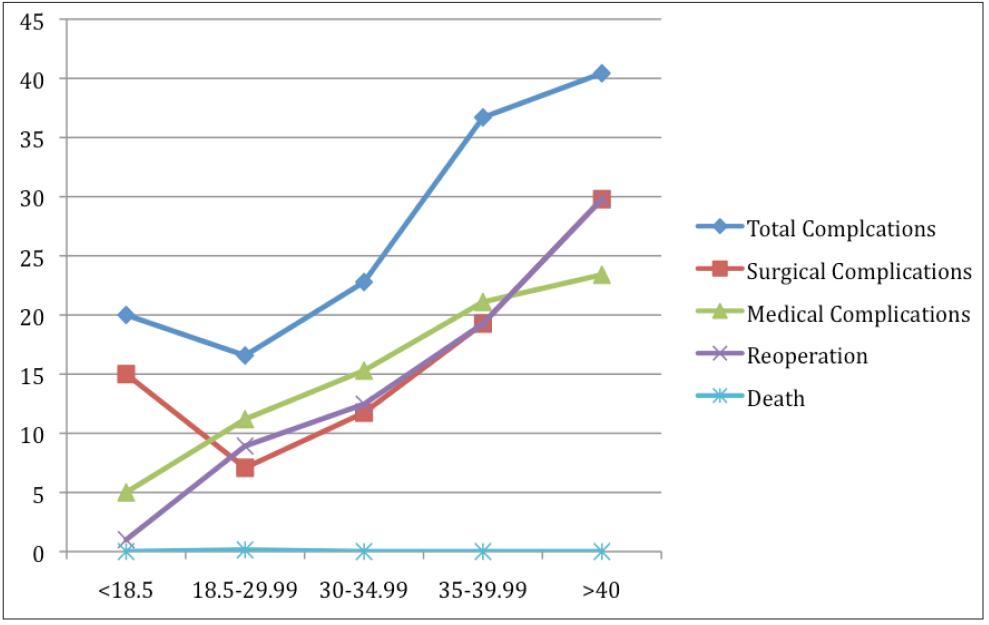 Multivariate regression analysis demonstrated a different picture. With respect to prosthetic reconstruction, only severely and morbidly obese patients had an elevated odds of having a surgical complication [Table 5]; the severely obese were also at risk for reoperation. Additionally, patients with moderate obesity had a 28.9% increase in their risk for incurring a medical complication. Interestingly, underweight patients appeared to have decreased risk of complications or reoperation, although these numbers did not reach significance.

On multivariate analysis, a strong connection between BMI and autologous reconstruction outcomes was present. Specifically, there was a significant incremental increase in odds for surgical complications when transitioning from reference weight to morbid obesity (ranging from 1.35 to 3.31) [Table 6]. Individuals with a BMI over 35 also had significant risk for reoperation. Medical complications rose as BMI increased, although data did not reach significance. Similarly, underweight patients had an elevated risk of surgical complications; however this data did not reach significance (P = 0.062).

We found significant differences in the groups, with regard to preoperative variables. With regards to prosthetic reconstruction, underweight patients tended to be younger, while obese patients tended to be older (48.0 vs. 51.0 years) [Table 1]. With regards to underweight patients, there was a lower incidence of preoperative commorbidites, with the exception of active smoking (17% vs. 13.5%). With regards to overweight patients, nearly all commorbidities were increased, including hypertension, diabetes, chronic obstructive pulmonary disease (COPD), dyspnea, history of transient ischemic attack (TIA) or cerebrovascular accident (CVA), prior percutaneous coronary intervention (PCI) or previous cardiac surgery (PCS), and chronic steroid use. There was also a significant decrease in outpatient cases, and an increase in work relative value units (RVU) and operative time. These findings are all in accordance with previously-published literature.[24,25]

Preoperative variables in the autologous group paralleled the prosthetic group [Table 2]. Underweight patients had lower incidence of nearly all comorbidities, with the exception of active smoking, steroid use, and wound infection. Underweight patients had similar percentage of outpatient cases, and decreased operative time. As expected, obese patients had an increased incidence of hypertension, diabetes, dyspnea, and wound infection in the prior 30 days.[24,25] Significantly fewer obese patients were outpatient surgery, and operative time was significantly longer (6.09 h vs. 6.61 h).

While it has previously been found that underweight patients tend to utilize prosthetic breast reconstruction to a higher degree, and that obese patients utilize more autologous reconstruction, this is the first national evaluation of this trend.[30] Ostensibly, this phenomenon is the result of the lack of donor-site availability in underweight (as opposed to overweight) patients. However, advanced microsurgical techniques, use of flap plus implant techniques, and double-free flap techniques have all contributed to increase the availability of autologous reconstruction for underweight patients.[31,32]

In our study, we have opted to utilize a unique stratification method, to examine if different BMI categories result in different outcomes. In general, increasing obesity led to statistically increased rates of surgical complications, irrespective of reconstructive type. This is consistent with previous literature on this subject.[33,34] Specifically, wound infection (superficial/deep/organ space), dehiscence, and prosthesis/flap failure all increased as patient BMI increased, although differences were more exaggerated in the autologous reconstruction group [Tables 3 and 4]. This finding was confirmed on both univariate and multivariate analysis.

Multiple medical complications increased as patient weight increased, in both reconstructive groups. Specifically, bleeding requiring transfusion and DVT were elevated in the prosthetic group; and PE, acute renal failure, and sepsis/septic shock were elevated in the autologous group. On multivariate analysis, while medical complication rates were elevated, data only reached significance for the prosthetic in moderate obesity group (OR 2.752, P = 0.009). Finally, reoperation rates were significantly elevated in both stratified obesity cohorts, with a stronger relationship in the autologous reconstruction group. 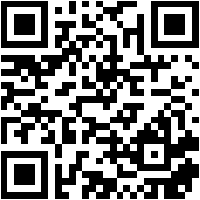