Rhinosporidiosis is caused by the organism Rhinosporidium seeberi. It is a rare aquatic protistan parasite. Though more prevalent in Asiatic regions, cases have also been reported in European countries. In India, it mostly affects the southern part. Rhinosporidium seeberi most commonly affects the mucous membranes, but can also affect other structures including the larynx, trachea, skin, genitalia, lungs and rectum. The typical presentation is that of a pinkish mass which bleeds profusely. Isolated lacrimal sac rhinosporidiosis is very rare. Computed tomography scans and magnetic resonance imaging are helpful in diagnosis, but histopathological study along with Gomori methenamine silver, periodic acid-Schiff, and potassium chloride are required for confirmation. Its mainstay of treatment is surgery. Prognosis is excellent, but recurrence is not unusual

Rhinosporidiosis is a chronic granulomatous disease affecting the mucous membrane primarily. It is caused by Rhinosporidium seeberi.[1] Previously thought to be a fungus, it is now believed to be a rare aquatic protistan parasite. Rhinosporidiosis is endemic in South India, Sri Lanka, South America and Africa. The most common route of transmission is exposure to the pathogen while bathing in stagnant water pools. It usually presents as a pinkish mass in nose, nasopharynx, oropharynx, conjunctiva, rectum and external genitalia with symptoms depending on the site. Isolated lacrimal sac involvement is very rare. The mainstay of treatment is surgical excision. The authors present a case of isolated lacrimal sac rhinosporidiosis with its surgical management. The patient involved in this article agreed to has his facial pictures published and signed the consent form.

A 20-year-old man presented with swelling at the medial canthus of the left eye. He had experienced epiphora for a period of 6 months prior to presentation. There was no history of pain, trauma, bleeding, fever or nasal obstruction. On examination, his general condition was good. There was a soft, nontender, diffuse swelling of 4 cm × 2 cm over the medial canthus of the left eye. Syringing of the lacrimal system was performed and was remarkable for obstruction of the lacrimal sac. The remainder of the ocular examination was normal. Nasal endoscopy and examination of the oropharynx were normal. Routine hematological investigations were normal. Serial axial sections of the paranasal sinuses were performed using computed tomography (CT). Multi-plane reconstructions of the images were also studied in addition to screening ultrasonography (USG). A well-defined soft tissue lesion measuring 20 mm × 15 mm in size was noted in the subcutaneous plane at the medial canthus of the left eye at the level of the nasolacrimal sac. The lesion extended into the upper part of the nasolacrimal duct. The lesion was hyperdense with a mean CT attenuation of 48 Hounsfield units (HU) [Figures 1 and 2]. 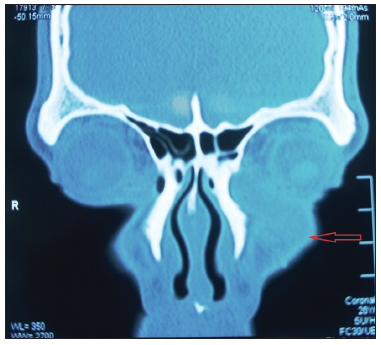 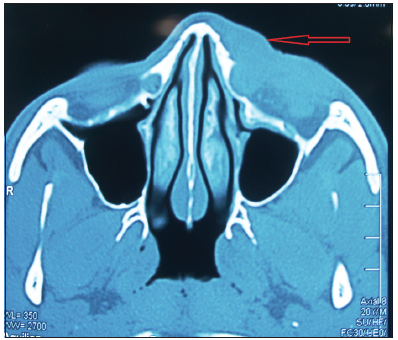 Screening USG showed multiple abnormal vessels with a highly vascular hyperechoic lesion. All the paranasal sinuses were normal. A provisional diagnosis of vascular malformation was made and excision under general anesthesia was planned.

Two percent xylocaine with adrenaline was infiltrated in the region of the medial canthus of the left eye. An elliptical incision was made over the medial canthus of the left eye and extended to the infra-orbital region. The mass was dissected out within the subcutaneous plane and was noted to arise from the lacrimal sac. The mass was soft in consistency, highly vascular and irregular in appearance. The sac could not be preserved during dissection. The lacrimal bone was drilled and silastic tubes were placed from the lacrimal punctum to the nasal cavity to maintain the lacrimal flow. The medial canthus was repaired and the wound closed in layers. The tissue was sent for histopathology [Figures 3-5]. 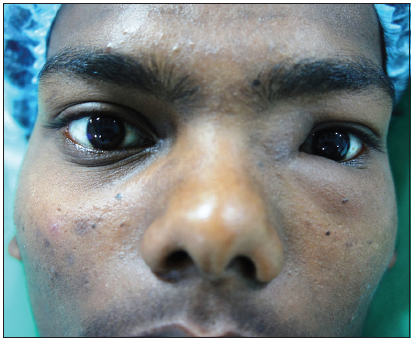 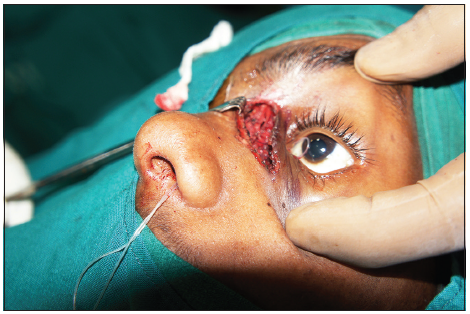 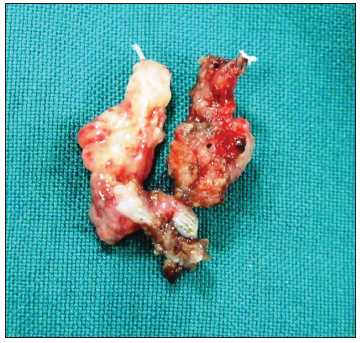 Pathological sections showed fragments of polypoidal tissue lined by hyperplastic squamous and respiratory mucosa. The underlying stroma showed variable sized round fungal sporangia lined by a thickened wall and many small intraluminal spores. The surrounding tissue showed granuloma formation and infiltration with lymphocytes, plasma cells and eosinophils. The diagnosis was rhinosporidiosis of lacrimal sac [Figures 6 and 7]. 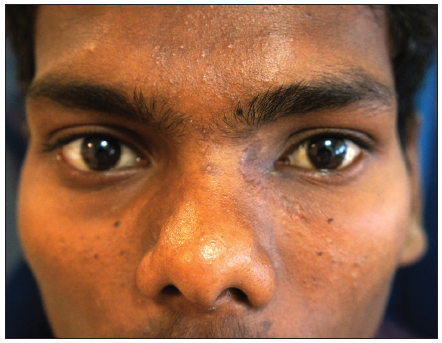 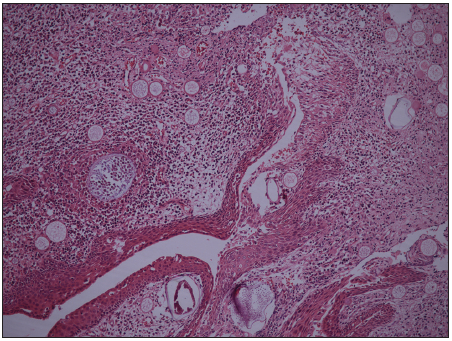 The patient was treated with diaminodiphenyl sulfone (Dapsone) 100 mg/day postoperatively for one month. There was no recurrence and the incision healed well with minimal scarring [Figure 8]. 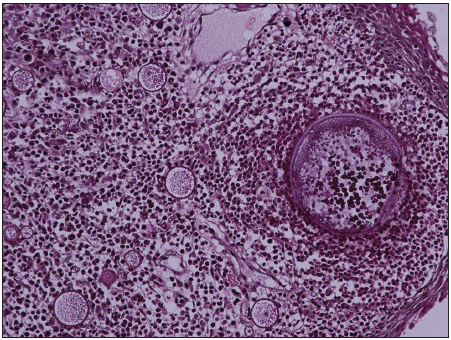 Rhinosporidiosis was first described in 1900 by Guillermo Seeber who treated a 19-year-old farm worker in Argentina whose breathing was impaired by a nasal mass. Ashworth described the life cycle of the organism in 1923, observing its similarity to the fungal life cycle and renaming it R. seeberi.[1] Recently, an analysis of the 18S ribosomal ribonucleic acid gene classified it as a protistan parasite and included it in the new class mesomycetozoea.[2] The organism is prevalent in Southern India, Sri Lanka and Southeast Asia, although cases have been reported in South America, Africa and the United States. The most common age group affected is 15-40 years with a predominance in males. The nose and nasopharynx are affected in 70%, while the palpebral conjunctivae and associated structures are affected in 15% of cases.[3] The mouth, upper airway and eye may also be the sites of disease. Additional sites including the skin, ear, larynx, trachea, bronchi, genitals (vagina, penile urethra or meatus and scrotum), and rectum have also been described.[4,5] Deep organ involvement with systemic disease has been rarely reported.

Rhinosporidiosis typically presents with sessile or pedunculated polyps, which are occasionally surrounded by whitish spores. Symptoms will depend upon the site affected. Nasal symptoms include nasal obstruction, postnasal drip and bleeding. Ocular symptoms include redness of conjunctiva, itching, epiphora and photophobia. When only the lacrimal sac is affected, it may present as a small, isolated and nontender swelling over the medial canthus. The reasons for the spread of infection are unclear, and may occur secondary to local inoculation following trauma which progresses with local replication of the organism and associated hyperplastic growth of host tissue and a localized immune response. Nasal and mucosal rhinosporidiosis usually spread by bathing in stagnant fresh water of ponds, lakes or rivers whereas ocular rhinosporidiosis spreads by dust or air.[5] In cases in which only the lacrimal sac is involved, it is believed that the infection reaches the sac from the nose or eye via the lacrimal canaliculi without affecting the nose or conjunctiva.

CT scan and magnetic resonance imaging can help in diagnosis and in determining the extent of disease by giving moderate to intense enhancement in contrast studies.[6] However, definitive diagnosis requires microscopy of the biopsy specimen. The oval-shaped sporangia, containing hundreds of endospores, are easily identified under the microscope. Fungal stains including Gomori methenamine silver, periodic acid-Schiff and potassium chloride also help in the diagnosis. Serological tests such as the enzyme-linked immunosorbent assay are used for epidemiological studies.[7] The differential diagnosis includes condyloma accuminata and hemangioma. Although rhinosporidiosis cannot generally be treated by medication alone, some studies have shown successful treatment with a long course of dapsone.[8] Surgical excision with electro-coagulation of the base of the lesion now appears to be the treatment of choice in minimizing the risk of recurrence. Postoperative treatment with dapsone also prevents recurrence, which may have complications including life-threatening dissemination and local secondary bacterial infection.

In conclusion, although rhinosporidiosis is a mucosal disease, it may affect isolated deeper structures including the lacrimal sac, and should be kept as part of the differential diagnosis for all cases with pathology of the lacrimal sac. It is managed mainly by surgical excision although trans-nasal endoscopic excision with dacryocystorhinostomy can be tried in cases with limited disease of the sac. However, more studies of the endoscopic excision are required prior to establish efficacy. Postoperative dapsone treatment can help in the prevention of recurrence. Follow-up is necessary as recurrence is very common.

The authors certify that they have obtained all appropriate patient consent forms. In the form the patient(s) has/have given his/her/their consent for his/her/their images and other clinical information to be reported in the journal. The patients understand that their names and initials will not be published and due efforts will be made to conceal their identity, but anonymity cannot be guaranteed. 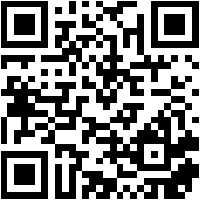