Aim: Most brachial plexus palsies occur following high-velocity trauma. The shoulder joint is a large proximal joint which influences motion of the hand. Transfer of the trapezius muscle is an effective alternative for palsy of the deltoid and supraspinatus muscles.

Methods: Between 2009 and 2014, 32 patients were treated with modified trapezius muscle transfer in which only the descending fibres along with their attachment to the lateral third of clavicle were used. The clavicle was fixed to the anterolateral surface of the humerus by cancellous screws. The arm was immobilised for 6 weeks.

Results: All the 32 patients had improved function with stability of the shoulder. The average increase in active abduction was from 7.5° (range: 0°-30°) to 85° (range: 45°-140°), and the mean forward flexion increased from 5.63° (range: 0°-15°) to 55.2° (range: 40°-90°) after a mean follow-up of 8.25 months. Twenty-four of the 32 patients rated the result as good to excellent and were satisfied with the improvement in stability and function. Fifty-nine point thirty eight percent patients had Medical Research Council Muscle power 4 after the surgery.

Conclusion: Transfer of the upper trapezius muscle with a segment of the clavicle segment for a flail shoulder can provide satisfactory function and stability with fewer complications.

Restoration of shoulder stability in posttraumatic plexopathy patients is critical in the preservation of distal function.[1] However, the complexity of management can be frustrating for both patient and surgeon. Primary surgery involves nerve repair, grafting and transfer techniques. Failed operations for the shoulder may require secondary procedures in the form of microneurovascular free-functioning muscle transfer,[2] tendon transfers, and arthrodesis to improve or restore function. A clear understanding of shoulder anatomy and biomechanics is of paramount importance when using adjacent muscles for transfer.[3] Options for transfer include the trapezius,[4,5] pectoralis major[6] and teres major, latissimus dorsi[2] and combined biceps and triceps muscles.

The trapezius has three functional segments, consisting of a descending segment which supports the weight of the arm; a transverse segment which retracts the scapula; and an ascending segment which medially rotates and depresses the scapula. Along with the levator scapulae and the serratus anterior, the middle and lower fibres of the trapezius muscle provide shoulder stability for arm movements and for that reason should be spared. The descending fibres which attach to the posterior aspect of the lateral third of the clavicle can be safely used. A more anterolateral fixation on the humerus is expected to abduct and forward flex the arm. Because the clavicle is a superficial bone, it is more amenable to dissection which obviates a more difficult dissection of the scapular spine. The current study was undertaken with the objective of using the descending fibres of the trapezius muscle to evaluate their effect on shoulder movements.

Patients with brachial plexus injuries who presented to the outpatient clinic of the Plastic Surgery Department were candidates for the study. A total of 41 patients were evaluated between 2009 and 2014, and 32 patients met inclusion criteria. All patients involved in this article agreed to have their facial pictures published and signed the consent form. The average age of the patients was 23.5 years with a range from 17 to 42 years. Inclusion criteria were a supple shoulder, passive abduction more than 90°, good adductor muscles, trapezius muscle power more than 4+ and an absence of locoregional injury. Exclusion criteria were dislocation or subluxation of the shoulder, a stiff shoulder, passive abduction less than 90°, weak adductor muscles, a weak trapezius muscle, the presence of a clavicular fracture and injury to the locoregional structures. Patients who had failed previous nerve reconstruction or nerve transfer and patients presenting 2 years or more following injury were the primary candidates for trapezius muscle transfer.

The patient was placed in the supine position with a pillow under the scapula and the neck turned to the opposite side. An incision was made on the anterior border of the trapezius muscle and extended down to the upper 4th of the humerus. The attachments of the upper descending fibres of the trapezius to the posterior border of the lateral 3rd of the clavicle and the attachment of the deltoid muscle to the anterior border of the clavicle were identified. The deltoid attachment was released and the attachment of the trapezius to the lateral clavicle was divided lateral to the coracoclavicular ligament [Figure 1a]. The deep surface of the clavicle was abraded with a bone rasp for bony union between the clavicle and the abraded humerus. The remaining fibres of the trapezius to the acromion and spine of the scapula were left intact. The proximal humerus was exposed by splitting the deltoid longitudinally [Figure 1b] and slightly chiselled out to roughen the anterolateral surface of humerus. The rotator cuff was left untouched. With the humerus held in 90°-100° of abduction, the clavicular fragment with its trapezius insertion was transferred and fixed to the humerus with two 4 mm cancellous screws [Figure 1c]. The deltoid was then sutured over the trapezius with a polypropylene 1-0 suture to render strength to the trapezius and to bury the screws [Figure 1d]. The skin was closed over a suction drain. The arm was splinted in 90-100° arm abduction. The mean operative time was 112 min. Radiographs were taken on the 2nd postoperative day to assess the position of the screws and the clavicular fragment, and at 3 and 6 weeks to monitor any signs of union. The arm was immobilised for 6 weeks, but assisted and active exercises of the elbow, hand and fingers were initiated on postoperative day one. At one week, the splint was removed and a custom-made aeroplane splint was applied maintaining the position of abduction. Progressive passive adduction of the arm was started at that time, while active adduction and passive abduction in the supine position were initiated after 21 days. The same exercise was gradually done in the sitting position. After 6 weeks, active abduction and forward flexion were encouraged with splinting between exercises. The patient was evaluated monthly for 3 months and then every 3 months for one year. 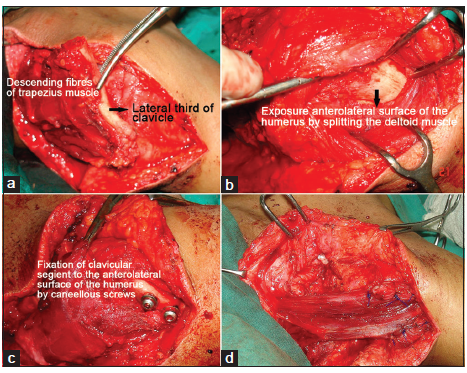 Figure 1. (a) Mobilisation of descending fibres of the trapezius muscle and their insertion on the posterior border of lateral third of clavicle; (b) exposure of anterolateral surface of humerus by splitting the deltoid muscle; (c) fixation of clavicular segment to the anterolateral surface of the humerus by cancellous screws; (d) suturing of deltoid with trapezius and bury the screws 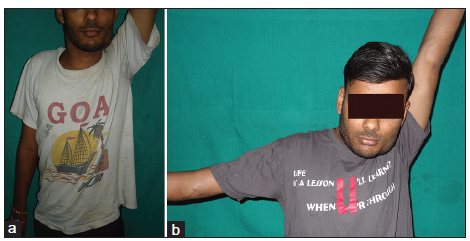 Muscle power plays a pivotal role in the day to day activities of a patient. Medical Research Council 4 was encouragingly found in 19 patients [59.38%] after trapezius transfer [Table 2].

Two patients were found to have a loose cancellous screw with abduction limited to 35° and 45°, respectively. One patient required eventual removal of the loose screw. Flap necrosis at the suture line was observed in one patient and healed with conservative management.

Secondary surgery in brachial plexus palsy is often required for the restoration of shoulder movement[8] and for the restoration of both analgesia and function. Because the shoulder joint is a large and proximal joint, it is essential for adequate function of distal joints of the upper limb. Local pedicled muscle transfer and glenohumeral arthrodesis remain the mainstay of treatment. With the recent advances in microsurgery, free muscle transfer is also possible.[2]

Arthrodesis of the shoulder has traditionally been an option in patients with instability secondary to a brachial plexus lesion. However, the surgical technique is difficult, lengthy, and there is no consensus regarding the ideal position for glenohumeral fixation. In addition, the rates of pseudoarthrosis, fracture, residual pain, repositioning of the limb,[9] and irreversibility of the procedure are significant limiting factors.[10] However, failure after muscle transfer may be salvaged by shoulder fusion.[11] Microsurgery is more cumbersome, has a long learning curve, and tension adjustment is not reliable.

The trapezius muscle has previously been used as a donor muscle only with periosteum[12], which results in gradual stretching of the muscle and progressive loss of abduction, in trapezius muscle transfer with the spine of the scapula and acromion[4], and in mobilisation of the upper and middle trapezius muscle with the clavicle, acromion and scapular spine.[5] The latter two procedures involve extensive, deep and difficult dissection with sacrifice of a significant amount of muscle and bone.

In the technique presented in this paper, only the upper fibres with the lateral clavicle were dissected with good results.

Using Saha’s technique, Aziz et al.[13] noted that there was a gain in abduction of 45.4° following transfer of the acromioclavicular segment. Using the same procedure, Kotwal et al.[14] achieved a gain of 60° of abduction, although the mean level of abduction attained was not mentioned. Conversely, Ruhmann et al.[15] achieved a mean abduction of only 39° with a mean forward flexion of 44°. Severo et al.[10] obtained more encouraging results with a mean postoperative abduction of 75.8° and flexion of 77°. On the contrary, Ragab and El-Sayaed[16] achieved only 39° of abduction and 32° of flexion. Clearly, the functional outcome following transfer of the trapezius muscle varies considerably.

The current technique of using the upper descending fibres is easy, quick and reliable with reproducible results and a definite increase in shoulder stability and function. The mean level of abduction of 85° and flexion of 55.2° achieved was encouraging. In 3 of 32 patients, almost 140° of abduction was obtained. In addition, patients were satisfied with fullness in the otherwise atrophic deltoid region, improved forward flexion, a more stable shoulder joint and decreased heaviness of the upper limb.

Passive shoulder abduction of more than 90° and strong adductors are important prerequisites, and an intensive physiotherapy programme should be initiated prior to transfer in order to gain more passive abduction. If adequate abducton is not attained, shoulder arthrodesis is the last resort.

Scar tissue secondary to prior surgery renders the dissection challenging. The use of pillow under the shoulder is recommended to elevate the field of dissection. The pillow should be removed prior to fixation on the humerus lest the transfer be impossible and the incision sutured under tension.

Many patients have osteoporosis of the humerus secondary to disuse following injury to the brachial plexus, creating difficulty in fixation of the clavicle to the humerus. Adequate preparation of the undersurface of the clavicle and anterolateral surface of the humerus is very important, and washers with screws were used in the current study to overcome this problem. Serial radiographs at intervals have been discussed previously. Nonunion was not observed in any cases, although one screw required removal.

Postoperative function depends on the greatest possible tension in the transferred muscle. Proximal mobilisation of the trapezius muscle is limited secondary to possible damage to the accessory nerve, which should be identified during dissection. Anterolateral fixation on the humerus is important to achieve forward flexion and internal rotation in addition to abduction.

Drains should be left in place for one to three days following surgery to prevent late seroma formation and subsequent adhesion of the muscle.

In conclusion, transfer of the upper trapezius muscle with a clavicular segment for a flail shoulder can provide satisfactory function and stability with fewer complications.

The authors certify that they have obtained all appropriate patient consent forms. In the form the patient(s) has/have given his/her/their consent for his/her/their images and other clinical information to be reported in the journal. The patients understand that their names and initials will not be published and due efforts will be made to conceal their identity, but anonymity cannot be guaranteed. 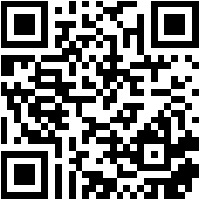