Aim: The aim was to study the role of Jet force technology (JFT) in wound management.

Methods: This is a retrospective analysis of 18 cases of chronic nonhealing wounds in which JFT was used. Chronic wounds which had already undergone surgical debridement but which were not ready for reconstruction (skin graft/flap) secondary to a persistent bacterial load or infection (tissue culture positive) were included in the study. Patients were divided into two groups. Group 1 included those patients who were poor candidates for anesthesia or who refused for reconstruction and were managed with JFT only. Group 2 included those patients who were cleared for anesthesia and who were managed with JFT and skin graft or flap coverage. The time to negative wound cultures after JFT and the total duration of healing were noted.

Conclusion: Hydrotherapy with JFT helps in the removal of contaminants, debris, and microbial colonization of the wound leading to spontaneous wound healing and facilitating wound bed preparation for wound coverage by a skin graft or flap.

Normal wound healing is a complex array of multiple processes which is characterized by 3 overlapping phases: inflammatory, proliferative and remodelling.[1] Infection and debris are one of the important and common impediments to wound healing. Wound healing is possible only when bacterial counts are maintained at a concentration of 100,000 organisms per gram or less.[2] The presence of eschar, scab or foreign bodies also act as impediments to wound healing.[3] Irrigating the wounds under pressure (hydrotherapy) removes debris and reduces the bacterial content (bio burden), assisting in wound healing.[3]

Jet force technology (JFT) is a type of continuous hydrotherapy which transforms saline and oxygen into microdroplets, which are accelerated to supersonic speeds to remove dead or poorly healing tissue from a wound surface. On a review of the current literature, no articles on JFT were found. This article presents the authors’ experience of JFT in the management of chronic wounds.

This is a retrospective study of patients with chronic nonhealing wounds in whom JFT was used in the Department of Plastic Surgery, Jawaharlal Institute of Postgraduate Medical Education and Research, Pondicherry, India from November 2013 to October 2014. Patients of all age groups and both genders with chronic nonhealing wounds (> 3 months duration) of different etiologies which had undergone surgical debridement but were not ready for reconstruction due to debris and infection were included in the study. Eighteen patients matched the inclusion criteria. Informed consent was obtained. Details including age, gender, etiology, duration of wound, site, size, co-morbid factors, type of organism grown in tissue culture prior to JFT, duration to negative cultures following JFT, and duration until wound healing were recorded in the study proforma. The Wound Score was documented using the Bates Jansen Wound Assessment Tool.[4] Wound score and measurements were recorded by Digital Planimetry using Image-J Software (National Institutes of Health).[5] Wound Score and measurements were recorded at each dressing changes. Patients were evaluated for medical clearance for anesthesia. Wound tissue cultures were sent prior to beginning JFT and weekly thereafter. JFT hydrotherapy and dressing changes were performed when the wound dressings were noted to be soaked. No systemic antibiotic therapy was required in any of the cases. Only saline moist dressings were used. JFT hydrotherapy was performed using a disposable JFT cannula (Tav Tech Ltd, Israel) which costs INR 2880/-[ Figures 1 and 2]. All JFT procedures were done at the bedside without the need for anesthesia. The JFT cannula has two ports, one for the oxygen line and the other for connection to a saline bag. The pressure generated depends upon the flow rate of oxygen (9L/min-4 PSI, 11L/min-6 PSI, 13L/min-9 PSI, 15L/min-12 PSI). All patients tolerated the JFT procedure well. When the dressing became soaked, JFT with a moist saline dressing was done. In Group 1, only JFT was used. In Group 2, once the tissue cultures became negative, the wound was covered with a skin graft or flap. 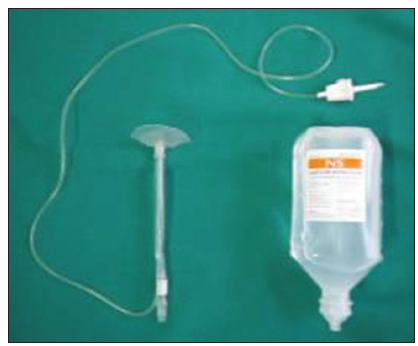 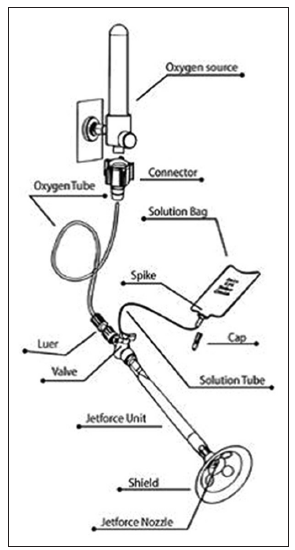 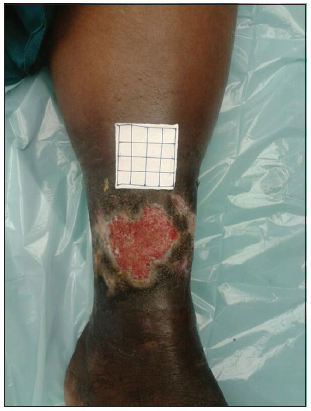 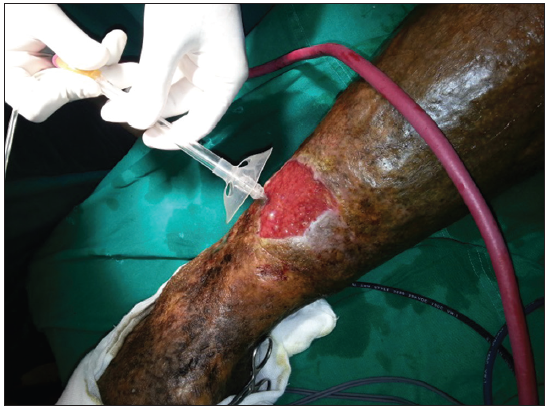 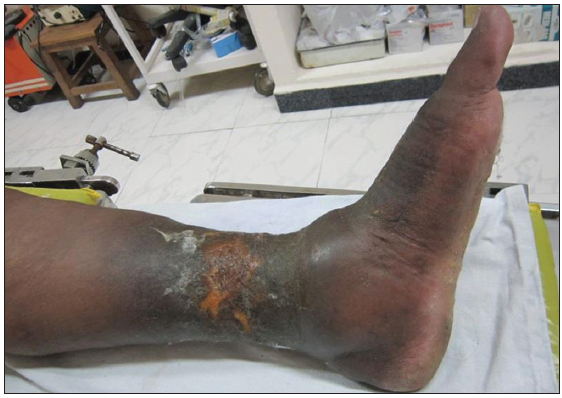 The healing of any wound proceeds through the following phases: hemostasis, inflammation, proliferation and tissue remodeling or resolution. The end result of wound healing is determined by the interplay of these functions in a proper sequence at an appropriate intensity for a specified duration of time.[6] Local wound infection and foreign bodies affect healing by prolonging the inflammatory phase. If the bacterial count in the wound exceeds 105 organisms per gram of tissue or if beta-hemolytic Streptococcusis present, the wound will not heal by any means, including flap coverage, skin grafting or primary suturing.[7] The common terms used to describe the processes used to remove factors detrimental to wound healing are "cleansing" and "debridement". Cleansing describes the process in which fluid is utilised to remove cellular debris and residue from the wound surface or exudate or wound care products.[8] Debridement refers to the application of mechanical force or chemicals to remove any adherent particles from a wound.[9]

Wound cleansing is an integral part of the management of acute traumatic wounds as well as chronic wounds. Hydrotherapy is one of the oldest adjuvant therapies still in use today. Hydrotherapy is the use of water or saline under pressure to mechanically remove microscopic debris and bacteria. There are two types of hydrotherapy commonly practiced, whirlpool and pulsed lavage therapy. Whirlpool therapy supports wound healing by debriding the wound, warming the injured extremity and providing buoyancy and gentle limb resistance for physical therapy.[10] However, whirlpool treatments have fallen out of favour secondary to the risk of nosocomial contamination and transmission of virulent infections.[11,12] Wound cleansing involves the process of selection of both a wound cleansing solution and a mechanical means for delivering that solution to the wound. The methods for wound irrigation can be broadly classified into two types, including continuous and pulsed irrigation. The delivery of an uninterrupted stream of irrigant to the wound’s surface is termed "continuous irrigation". The system of intermittent or interrupted delivery of irrigant to the wound’s surface is referred to as the “pulsed irrigation” technique. Recently, the use of pulsed lavage has begun to replace whirlpool therapy. Mechanical forces are used to rid the wound of bacteria and other particulate matter retained on the wound surface by adhesive forces. Under most circumstances, debridement alone will reduce bacterial load with the added benefit of removing necrotic tissue which would otherwise increase inflammation and delay healing.[13] If cleansing is required, an appropriate solution should be selected to optimise the healing process and minimise the risk of damage to viable tissue.[14] The recommendation for irrigation pressure ranges from 4 to 15 PSI. When pressures < 4 PSI are used there is insufficient pressure to remove surface pathogens and debris. Irrigation pressures >15 PSI have been noted to cause wound trauma and drive bacteria into wounds.[15] It is thought that pulsed lavage encourages the growth of healthy, granulating tissue.[16] The goal is to remove unwanted tissue without disturbing healthy tissue. The forces holding bacterial particles on the wound’s surface are capillary, molecular and electrostatic. Madden et al.[17] proposed 3 types of forces that could be used to remove bacteria from the wound’s surface: direct mechanical contact (e.g. scrubbing), inertial forces and fluid dynamic forces. Fluid dynamic forces are the effective forces in wound irrigation using pulsed lavage. The high-powered water jet is a unique device when compared to the pulse irrigator, which is a low-energy water jet. The advantage is the ability to focus a high-powered stream of water into a high-energy cutting implement. The mechanism of action of this hydro jet is the Venturi effect. A jet of saline, propelled by a power console, travels across the operating window of a hand-held piece, and then into a suction collector. This pressurized saline stream functions like a knife. The saline beam is aimed parallel to the wound, allowing the cutting mechanism to perform a highly controlled form of tangential excision.[18] It is also used as pulsed lavage in wound cleansing.[19]

JFT is a type of hydrotherapy which uses a disposable cannula (Israel), saline and oxygen under pressure to mechanically remove mechanically debris and bacteria. Utilizing a unique triple nozzle, JFT is one of the simplest, most efficient and e­ffective methods of achieving fast and virtually painless debridement when compared to other mechanical debridement methods. JFT is the comprehensive innovation for cleansing and debridement. By using compressed oxygen combined with a minimal amount of saline solution, JFT quickly and e­ffectively debrides wounds without the mess of traditional methods. JFT supersedes other equipment which is more complicated to operate and replaces more expensive methods of debridement. It is ideal for use at the bedside without the need for anesthesia in patients who are not medically stable for anesthesia or who have refused surgery. In our study it was useful in both groups of patients. The current study’s limitations include its small sample size, the lack of statistical analysis, the absence of controls and the lack of testing utility against other infectious organisms including like fungi, anaerobes and biofilms.

In conclusion, hydrotherapy with JFT helps to remove contaminants, debris and microbial colonization of the wound leading to spontaneous wound healing or facilitating wound bed preparation for wound coverage by a skin graft or flap. 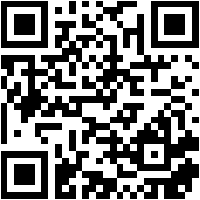