Aim: Negative pressure wound therapy (NPWT) has achieved widespread success in the treatment of chronic wounds. However, its effects have been only partially explored, and investigations have generally concentrated on the wound-dressing interface; a detailed histopathological description of the evolution of wounds under NPWT is still lacking. The present study was performed to investigate the effect of a limited access dressing (LAD) which exerts intermittent NPWT in a moist environment on chronic wounds.

Methods: A total of 140 patients were randomized into 2 groups: LAD group (n = 64) and conventional dressing group (n = 76). By histopathological analysis of the granulation tissue, the amount of inflammatory infiltrate, necrotic tissue, angiogenesis, and extracellular matrix (ECM) deposition was studied and compared to determine healing between the 2 groups.

Negative pressure wound therapy (NPWT) is a bio-stimulating treatment for chronic wounds. In recent years, it has become one of the most frequently adopted treatments for complex wounds worldwide. While it is generally believed that NPWT improves wound healing and is cost-effective, there is a persistent demand for scientific evidence.

Several recent studies support the use of NPWT to enhance wound healing by removing excess extracellular fluid and decreasing tissue edema, which leads to increased blood flow[1] and stabilization of the wound environment. A reduction in systemic (e.g. interleukins, monocytes) and local mediators of inflammation has been demonstrated in experimental models,[2] while decreased matrix metalloproteinase activity[3] and bacterial burden have been documented clinically.[4]In vivo, NPWT has been shown to increase fibroblast proliferation and migration, collagen organization, and to increase the expression of vascular endothelial growth factor and fibroblast growth factor-2, thereby enhancing wound healing.[5]

Limited access dressings (LADs) have been shown to be more effective in the treatment of chronic wounds.[6] The present study evaluates the role of intermittent negative pressure in a moist environment using LAD (cycle of 30-min suction and 3.5-h rest) on chronic wounds by quantitative and comparative analysis of histopathological parameters including the amount of necrotic tissue, the number of inflammatory cells, extent of angiogenesis, and the level of extracellular matrix (ECM) deposit.

This prospective randomized study was carried out in the Department of Plastic Surgery and Burns, Kasturba Medical College and Hospital, Manipal, India. The Institutional Ethics Committee reviewed and approved the study protocol. Informed consent was obtained from all patients or their next of kin (as applicable) before inclusion into the study. 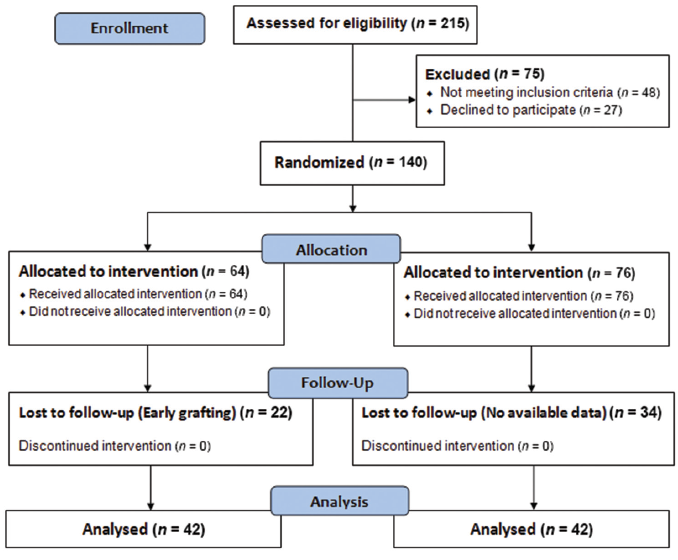 Patients were randomized by generating tables of random numbers through www.random.org Numbers were assigned to a treatment group and sealed in opaque envelopes containing labeled paper with the treatment and patient ID.

Wound biopsies performed on days 0 and 10 were collected, fixed in 10% formalin, dehydrated through an increasing alcohol series (50%, 70%, 90%, and 100%), cleared in xylene and embedded (Leica EG1150 H) in paraffin wax (melting point 56℃). Serial sections of 5 µm thickness were cut using a microtome (Leica RM2255) and were stained with hematoxylin-eosin (Sigma-Aldrich, MO, USA). Each section was evaluated in 8 microscopic fields (×100) under light microscopy (Olympus PM20). Histopathology slides were graded using a modified 0-4 Ehrlich and Hunt numerical scale, and modified and internally validated in our laboratory on a scale of 1-3, with 1 representing necrosis, 2 representing inflammatory cell infiltration (white blood cell and fibroblast count), and 3 representing ECM deposition. We used a 5-point scale to evaluate the presence of necrosis and inflammatory cell infiltration (0, no evidence; 1, occasional evidence; 2, light scattering; 3, abundant evidence; 4, confluent cell) as previously described,[8] and used a 4-point scale to evaluate the presence of ECM deposition (0, no evidence; 1, little ECM deposition; 2, moderate ECM deposition; 3, confluent ECM deposition) as previously described.[8] In determining the degree of angiogenesis, only mature vessels were counted and identified by the presence of erythrocytes in their lumen.[9] The score was assigned by 2 investigators. The code describing the specific treatment received by the patient was broken after scoring had been completed by the investigators.

Statistical analysis was performed by using the student's t-test for comparisons between groups [SPSS, 15th version (233 South Wacker Drive, 11th Floor, Chicago)]. The data were expressed as mean ± standard error (SE). P < 0.05 was considered to be significant. When appropriate, statistical uncertainty was expressed with 95% confidence levels.

On day 0, both the LAD and conventional groups showed necrotic tissue with increased inflammatory infiltrates [Figure 2A and Figure 3A]. On day 10, the LAD group [Figure 2B] showed an increase in ECM deposition and angiogenesis with a decrease in inflammatory infiltrate when compared to the conventional group [Figure 3B]. The results of the histopathologic scoring are shown in Table 2. Histopathology revealed that in LAD group after 10 days of treatment, the scores of necrotic tissue (P = 0.007) and inflammatory cell infiltrate (P = 0.018) were significantly lower than those of the conventional treatment group. The score of ECM deposits and number of blood vessels on day 0 were not well-defined in either group, but on day 10 ECM deposits (P= 0.001) and number of blood vessel (P = 0.005) were significantly higher in the LAD group than in the conventional group [Table 2, Figure 4]. 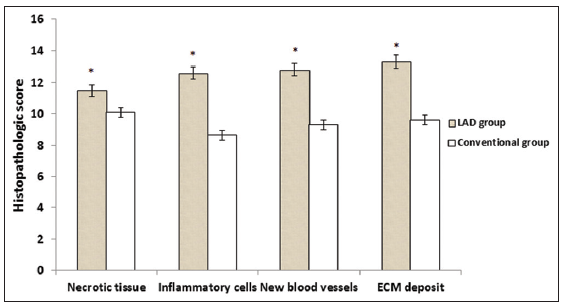 A study by Nain et al.[11] showed a decrease in the amount of necrotic tissue in chronic wounds treated with NPWT. Histopathological analysis showed significantly less necrotic tissue in the LAD group compared to a conventional dressing group after 10 days of treatment (mean ± SE, 11.5 ± 0.48 vs. 10.1 ± 0.30, P = 0.007). The ECM is made up of collagen fibers and glycosaminoglycons, which form the principal component of connective tissue and play a central role in wound healing by providing a structural framework for regenerating tissue.[12]

Angiogenesis improves circulation to the wound bed by providing oxygen and essential nutrients for the healing process.[14] Xia et al.[15] conducted a study on chronic wounds treated with NPWT, and showed that NPWT-treated wounds had increased angiogenesis and blood flow, with the number of new blood vessels significantly higher in a LAD group when compared to a conventional dressing group (mean ± SE, 12.8 ± 0.58 vs. 9.3 ± 0.29, P = 0.005).

In conclusion, the present study demonstrates that intermittent NPWT in a moist environment with a LAD to chronic wounds accelerates the rate of wound healing by significantly increasing ECM deposits and the formation of new blood vessels while decreasing the number of inflammatory cells and the amount of necrotic tissue. 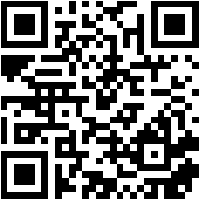