The incidence of aneurysmal bone cyst in the maxillofacial region is rare and may remain undiagnosed for a long period prior to becoming symptomatic. This may cause associated issues secondary to compression by extending to the surrounding vital anatomical areas. An aggressive course can lead to bony destruction with intracranial extension. We present a case of a 23-year-old man who presented with bilateral exorbitism with nasal obstruction.

Aneurysmal bone cysts (ABC) are typically found in long bones and the spine, but rarely can be seen in the craniofacial region. The incidence is 2% and 1.3% in the craniofacial region and maxillary region, respectively.[1,2] These benign, expansile bony tumors of unknown etiology are often referred to as aneurysmal bone tumors rather than cysts because of their aggressive behavior.

A 23-year-old man presented with a history of anosmia, the sensation of a blocked nose with mild pain that had been increasing over 6 months, and a gradual increase in bilateral exorbitism. The patient denies any history of fever, trauma, epistaxis, or oral bleeding. His physical examination was remarkable for a brownish bulge in the nasopharynx. The patient underwent computerized tomography (CT) and magnetic resonance imaging (MRI) examinations. Noncontrast computerized tomography (NCCT) of the nasopharynx region showed an expansile cystic lesion in the maxillary region bulging into the nasopharynx [Figure 1]. There was no cortical break [Figures 2 and 3]. Multiple fluid levels were seen within the lesion [Figures 4 and 5]. Cytology following fine-needle aspiration was performed, and a cytological diagnosis of ABC of the maxilla was given. The patient underwent enucleation of the mass. Histopathological examination further confirmed the diagnosis of a maxillary ABC, with cystic spaces filled with blood, and without an endothelial lining along with osteoclast giant cells [Figure 6a and b]. There were no surgical complications, and the patient was advised to follow-up in 3 months. His recovery has been uneventful. 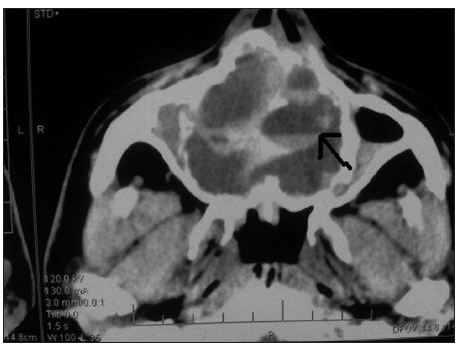 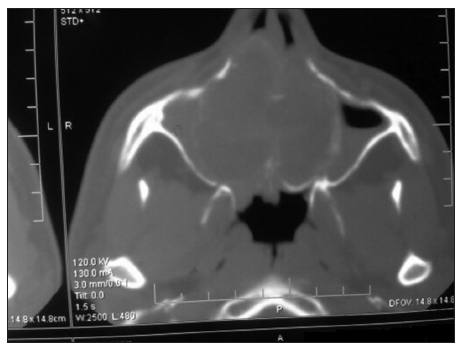 Figure 2. Axial section of noncontrast computerized tomography of nasopharyngeal region in bone window. There is expansion and thinning of the bony cortex. Both the pterygoid plates are intact 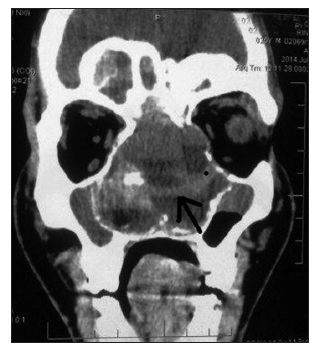 Figure 3. Noncontrast computerized tomography coronal section shows an expansile "blown out" lesion in the nasopharyngeal region with multiple fluid levels (black arrow). There is no destruction of the bone 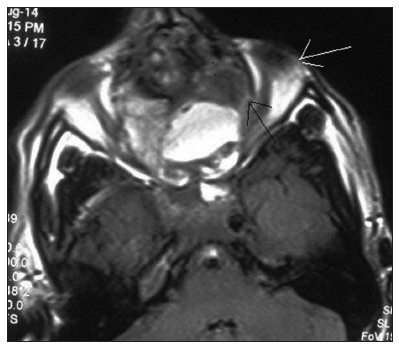 Figure 4. Magnetic resonance T1-weighted axial section of the nasopharyngeal region shows an expansile aneurysmal bone cyst with heterogenous intensities due to blood within the lesion. Multiple fluid levels are seen within the lesion. There is bulging of the left eyeball (white arrow) because of the mass effect (black arrow) 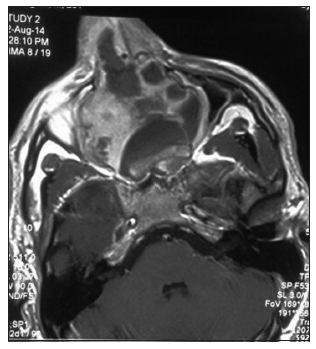 The maxilla is a rare site of ABC. It is neither an aneurysm nor a cyst. The World Health Organization (WHO) defines an ABC as an “expanding osteolytic lesion consisting of blood-filled spaces of variable size separated by connective tissue septa containing trabeculae of osteoid tissue and osteoclast giant cells.” These are usually found within bones with high venous pressure and marrow content. Sixty-five percent are primary or simple, and 35% are secondary in nature as per Bonakdarpour et al.[3] Primary ABC has a high level of accuracy of diagnosis with radiological studies, diagnosis, but only 20% of secondary lesions can be diagnosed radiographically. It is usually found in individuals less than 20 years old. There is no predilection for gender, but a 2:1 ratio in female to male has been recorded. ABC in the maxillary region may remain undiagnosed for a long period secondary to its gradual course as occurred in our case. A patient will generally report to the hospital after becoming symptomatic. The underlying pathology of giant cell tumor is well-known in secondary types of ABC. It is always diagnosed when the patient undergoes three dimensional imaging modalities such as CT and MRI. Radiographically, ABC gives the impression of a “blown out” or “ballooned” appearance of the underlying bone. CT and MRI demonstrate classic fluid-level images, but histological examination remains the hallmark for the diagnosis. The solid component of the lesion can be visualized on CT and MRI, which further indicates a secondary nature. Multiple areas of high intensity surrounded by hypointense rings are observed on T1-weighted and T2-weighted images. These represent the different ages of blood in the lesion.[4] There should be close collaboration between radiologist and pathologist when making the diagnosis, as a small specimen may miss the associated findings.

Surgical excision with enucleation remains the best treatment. The path to surgery depends upon the extent of involvement and its nature. Other potential options for treatment include percutaneous sclerotherapy, therapeutic embolization, curettage, block resection and reconstruction, radiotherapy and systemic calcitonin therapy.[5] There have some cases of spontaneous healing.[6]

In conclusion, ABC of hidden areas such as the maxilla as in our case poses a great diagnostic and management dilemma for the clinician. CT and MRI are quite helpful modalities in guiding the management path. This further helps in ruling out intracranial extension. The radiological modalities further help the anesthesiologist in guiding intubation and determining the level of risk during surgery. 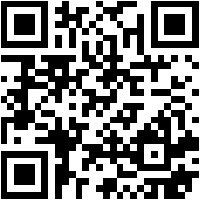